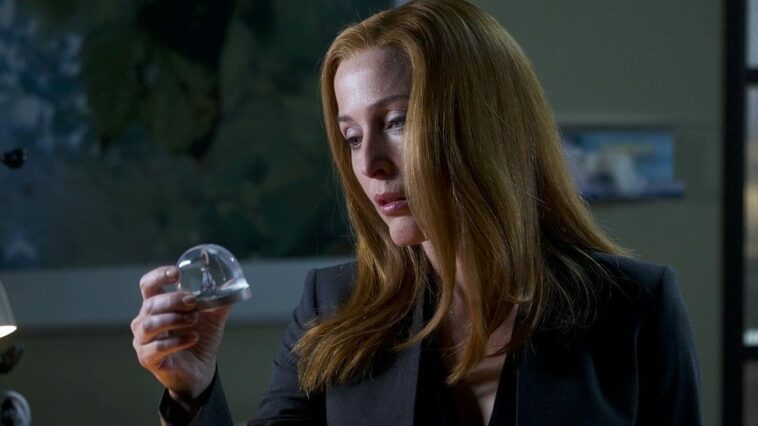 “Ghouli” started out like your typical post-Slenderman storyline. As a Wisconsin resident, I’m more than passably familiar with the phenomenon. Internet stories convince scared, superstitious teenagers that a terrifying being really exists and it out to get you and can be literally anyone, etcetera, etcetera. It was such a classic The X-Files opening, that it almost felt like an early Supernatural episode! No offense intended. In the end, “Ghouli” turned out to be anything but. This was the single most ingenious way of introducing William onto the show, which makes it my favourite of the new season so far. Additionally, some excellent jokes are cracked about Mulder’s first name, and Gillian Anderson gives the single most rousing, heartrending performance of her life in a long overdue emotional outpouring about her decision to give up her child.

All things considered, the plot of this episode isn’t so important as much as the information it conveys. As anyone who has been following my series of articles on Season 11 would know, I’m heavily invested in the enigma of William. After this episode, I think anyone would be hard pressed to deny that Mulder is his father (or Scully his mother, though that fact was never in dispute): his bedroom is decked with space paraphernalia, he has a telescope, he played baseball, he reads up on how to charm the ladies (priorities, Mulder calls it) and quotes Malcolm X. And he’s a hacker. DOD files are on his hidden laptop, which Scully finds under his mattress (citing that “Girls have secrets, too“, the implication about Scully’s own adolescent hiding place clear as day). Despite not having been raised by them, it is clear that William shares at least some characteristic with his parents. He could use a haircut though.

The even bigger revelation is that William has been seeing a psychiatrist; he was even prescribed medication, which he hasn’t taken, for symptoms that sound spookily like Scully’s, and even, in previous seasons, Mulder’s. Mass abnormal electrical activity in the brain. It is now more than confirmed that whatever Jeffrey Spender did to William didn’t last. He has phenomenal powers; telekinesis and the ability to make people see whatever he wants them to (called Remote Influencing in circles that study psychic abilities) are the ones presented to us in this episode. I can only assume they are part of a host of capabilities he inherited. William is the one who made the girls see “Ghouli” (of all the things in this episode, this was the part that made the least sense. Why he thought it would be funny to set up his two – two! – girl friends to be scared shitless is beyond me, but then, he’s a pretty messed up kid. That’s putting it mildly of course. And how did Mulder’s son manage to get so much game anyways? Definitely a Scully trait.). William is able to open locked windows from the wrong side. But he can’t always control it.

And, above all, the reason for which he was prescribed all that medication, all of Season 10 was indeed William’s vision world, shared through his connection with Scully. Here is where I would like to diverge for a moment and suggest that this entire plotline was revealed to us in the very first Season 11 trailer. For those who didn’t want any spoilers, or aren’t as fanatical as I, I’ll share the story with you. The trailer dropped, featuring an eerie cover the Cranberries’ “Zombie” by The Void feat. Bardi Johannsson. For anyone familiar with the lyrics (which happen to be about Ireland in real life) it’s terribly obvious now as to why the song was chosen.

And the violence, caused such silence

Who are we mistaken?

But you see, it’s not me

It’s not my family

With their tanks, and their bombs

And their bombs, and their guns

Heart is taking over

When the violence causes silence

We must be mistaken

Thematically, this song fits perfectly. But where will it take us from here? Mulder and Scully confirmed that Jackson Van de Kamp is really William Scully. They know that their son is out there, that he’s attainable. And they know that he got away safe. Gillian’s face in that moment while they watched the surveillance tape was the picture of motherly love. Mulder did the smart thing and didn’t reveal to Skinner (who is once again under CSM’s thumb) their suspicions that William was still alive.

Perhaps the most important information imparted with that about the aptly named “Project Crossroads”. A DOD conspiracy to create human/alien hybrid children. Will this have relevance later on? Likely so? Does CSM believe that William is one of these children? Likely. Is he? That, I think, remains to be seen. I still have zero doubts as to the fact that William is the biological child of Fox Mulder, but it isn’t inconceivable that the only reason Scully was able to conceive (haha) was because CSM cured her infertility during “En Ami”. Maybe he intended to impregnate her with science. Maybe he believes he succeeded. Maybe he just sees William as his child because it was through his intercession that Mulder and Scully were able to get pregnant at all. It would certainly fit the recurring theme of the Christian/trinity imagery prevalent between Mulder and CSM since “The Sixth Extinction”/”Biogenesis”/”Amor Fati” and the Mary imagery in Scully since William’s existence was revealed.

Spender acts with Godlike authority, self given, and executes it over Mulder regularly (the Father), Mulder is Spender’s biological son, on a mission to save mankind (the Son) and William, both of Mulder and of Spender, with immense power, dead and alive, man and ‘god’ (the Spirit). Scully suffers for her son, giving him up to the world, and then, sitting with his body, before he rises again, (Mary) mixing the Spirit and Son imagery. Mulder also exists almost as a Joseph (at least in Spender’s eyes), raising a child he isn’t perhaps fully responsible for creating. These allusions might make some uncomfortable for a variety of reasons but, regardless, they are there and they have precedence in the show. I would be remiss to ignore them.

And it ends with the Walk to Emmaus: William appears to Scully in the guise of an older, Asian man, they speak, kindly, share words, part amicably and then he leaves, only to be revealed immediately afterwards as her son.

The only thing that this story is lacking, at the moment, is a sense of impending doom. If William has the capacity to save the world, what will it be from? Or who? If the aliens are no longer a threat, what is the threat? The end game for the tattered remnants of the Syndicate and those who have taken up in its place has yet to be revealed, and I can’t help but wonder why. What purpose does it serve to remove that fear of the future from the audience by simply ignoring it? What’s the plan? Or will they somehow still end up on that bridge, an alien spaceship hovering over Scully while the world dies around her?

I don’t yet know where this road is leading, but I can only hope it will be heartstopping, with stakes higher than ever. If this is to be the end of The X-Files, as I hope, the payoff ought to be enormous.

Tune in every Thursday morning for an immediate analysis of each new X-Files episode as they air.