My father is a Vietnam Veteran. I have chosen to begin my analysis of “Kitten” in this manner that anyone reading can be assured I have the utmost respect and support for those who served. Anything which broaches the subject of Vietnam is difficult to write about. I will do my best, as I believe that last night’s episode of The X-Files did its best, and, in my opinion, a respectable job at that.

“Kitten” is structured like all the best of The X-Files monster of the week episodes, the only difference being that the cold open featured Skinner and his fellow soldiers instead of guest stars. This is far from the first episode to deal with experimentation on military personnel (see Season 2, Episode 4 “Sleepless” and Season 9’s openers “Nothing Important Happened Today Parts I and II”) and it does so in a way that is respectful and fair to the family of the man affected.

As the touted “first” episode to feature Skinner’s backstory (that’s not entirely true, but I’ll let it pass), this makes the plight of Skinner’s friend, nicknamed Kitten, easier for audiences to connect with; the emotional resonance with Skinner allowing for a greater impact. This concept undoubtedly is what makes the episode work. While Davy, Kitten’s son, is obviously in the ‘villain’ role, it is easy to have empathy for his situation. Too many veterans in the U.S., especially Vietnam vets, have been treated poorly by their nation. The socio-political state of the U.S. being what it was during and after Vietnam didn’t led itself to the environment that veterans so desperately needed after a war that was beyond anything anyone anticipated. So bad that my Uncle, a former field medic, refuses to this day to discuss anything about his time there with anyone. As history can attest, medical and psychological care for vets returning from Vietnam was worse than poor, and the public’s opinion on the war carried onto its opinion of the vets, many of whom (like Kitten and my father) were drafted. To serve was to support the war in the eyes of its detractors, no matter one’s personal opinions, and that was reflected not only in the interpersonal treatment that they received upon their return home, but also that of their medical treatment, which was initially appalling.

Additionally, there is a sad level of truth to the claims that the United States a) participated in biochemical warfare and b) that soldiers were experimented on. It has been proven that many were dosed with a variety of drugs to experiment on psychological impact, physical enhancement and other psychotropic results. The X-Files has taken this very serious, life-altering truth and shone a respectful light on it, showcasing the cabinet of horrors: in war no one is totally innocent. Not the men sent off to battle, nor the governments who give them orders. Kitten did terrible things, at least partially due to the noxious gas he was exposed to. He became, in effect, a “monster”, albeit an unintended,  government-sanctioned one. Skinner’s own war history is alluded to in less than kind terms. What makes monsters of men? And in what monstrous surroundings must they become such a thing in order to survive?

Recently, Ken Burns’ The Vietnam War documentary was released. For anyone at all, no matter if your familiarity with the history of Vietnam is in depth or in passing, second hand or first, it is a comprehensive look, not only at the war, but also the climate of the world preceding, during and post it’s conclusion. I highly suggest viewing it.

As to the analytical focus of this episode, I think the purpose was to re-cement Mulder and Scully’s rocky relationship with Skinner. In “My Struggle III”, Skinner was compromised by Spender (who may or may not have told him a particularly damning truth/lie about William). Mulder revisits his skepticism about Skinner’s loyalties throughout this episode, and I can’t help but align with him on principle; just because Skinner’s intentions may be to help him, it can’t be ignored that he is being used against them. At some point, despite the fact that he more than deserves their trust after all these years, what Spender told Skinner will likely come in to play, and it is most certainly going to mess with the minds of our beloved agents. Without the inclusion of this episode and the reaffirmation of Skinner’s place in their life, that inevitability would not be able to come into play. It also serves to establish that some level of government is attempting mind control via biochemicals, of it’s populous, which may or may not ever show up again. This is the second time it has appeared since Season 2’s third episode “Blood”. Nothing came of that, and it might go that way again, or, considering how important each precious moment of time is on this ten episode event series, it could have lingering implications going forward. 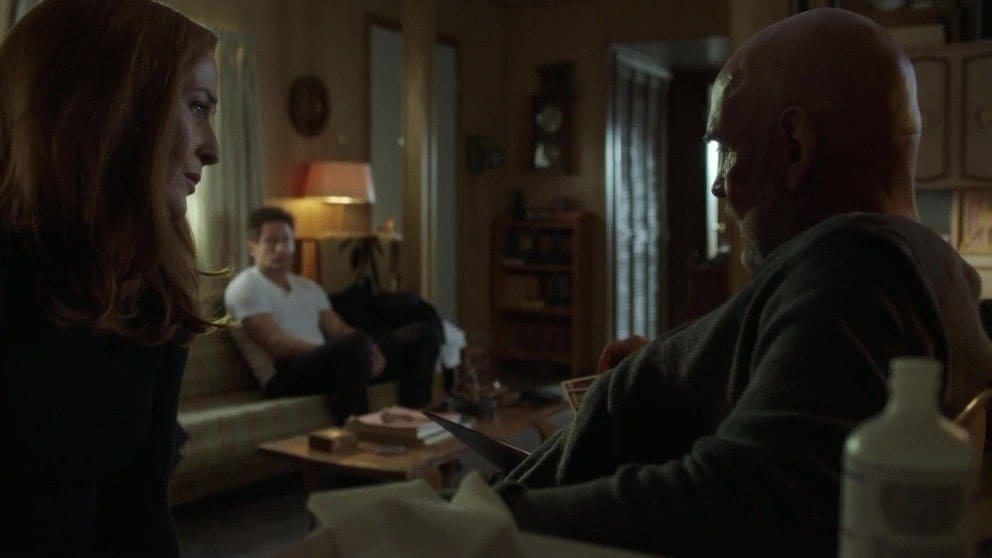 To end a rather serious article on a more light-hearted note, I’d like to acknowledge the fact that Mulder automatically knew Skinner by his nickname, saying in response to the vet on the bench “Is ‘Eagle’ Bald?” This brings to my mind two separate trains of thought. Firstly, we know Skinner was balding already around 40. When did he first started to bald that his compatriots christened him such? The second is that Skinner stands as one of the few genuinely just and good-hearted ranking officials on the show. The Eagle is a symbol in the U.S. but beyond its general correlation with freedom, the Eagle actually signifies honesty and truth. While Skinner has not always been able to fully embody those qualities, he has always done his best to live up to the Marine Corps motto: Semper Fidelis, or “always faithful”. It is his singular loyalty to his friends, be it people like Kitten, or Mulder and Scully, which sets Skinner above the rest, that he would seek, even to his own detriment, to bring forth the truth and justice that they are due.

Tune in every Thursday morning for an immediate analysis of each new X-Files episode as they air.