If you haven’t seen Black Mirror, well, I’m not sure why you’re here. If you have, you know it is arguably one of the most important and thought provoking shows of our era. 25YL is proud to feature analyses of each and every episode. Here, Caemeron Crain digs into Black Mirror S2E2, “White Bear.”

To ask it again: to what extent can suffering balance debts or guilt? To the extent that to make suffer was in the highest degree pleasurable, to the extent that the injured party exchanged for the loss he had sustained, including the displeasure caused by the loss, an extraordinary counterbalancing pleasure: that of making suffer—a genuine festival […] – Friedrich Nietzsche, On the Genealogy of Morals II:6 (1887)

The episode contains a major twist about two-thirds of the way through, which requires that one reassess everything that came before. It then, however, presents a looped structure, so instead of suggesting we take it backwards, it might be more precise to suggest taking it from that moment forward, looping back around to the beginning.

Either way, the truth of what is going is at the heart of the questions posed by the episode. Our protagonist, Victoria, apparently kidnapped a little girl with her fiancee, Iain. They may have treated her well for a bit—this is less than clear—but, ultimately, Iain burned the little girl to death, and Victoria filmed it. Iain hanged himself in prison. Victoria claimed that she manipulated, or coerced, into the whole thing, but the world wasn’t having it. To what extent this may have been true is worth thinking about, insofar as Black Mirror consistently explores the darker sides of human nature, and things like manipulation in particular.

1) To what extent should someone who films a heinous act perpetrated by another be held culpable for that act? Is it appropriate to view this as complicity, as opposed to mere inaction? To what extent is the filming itself—the technological aspect of the thing—that pushes in the direction of harsh moral condemnation? 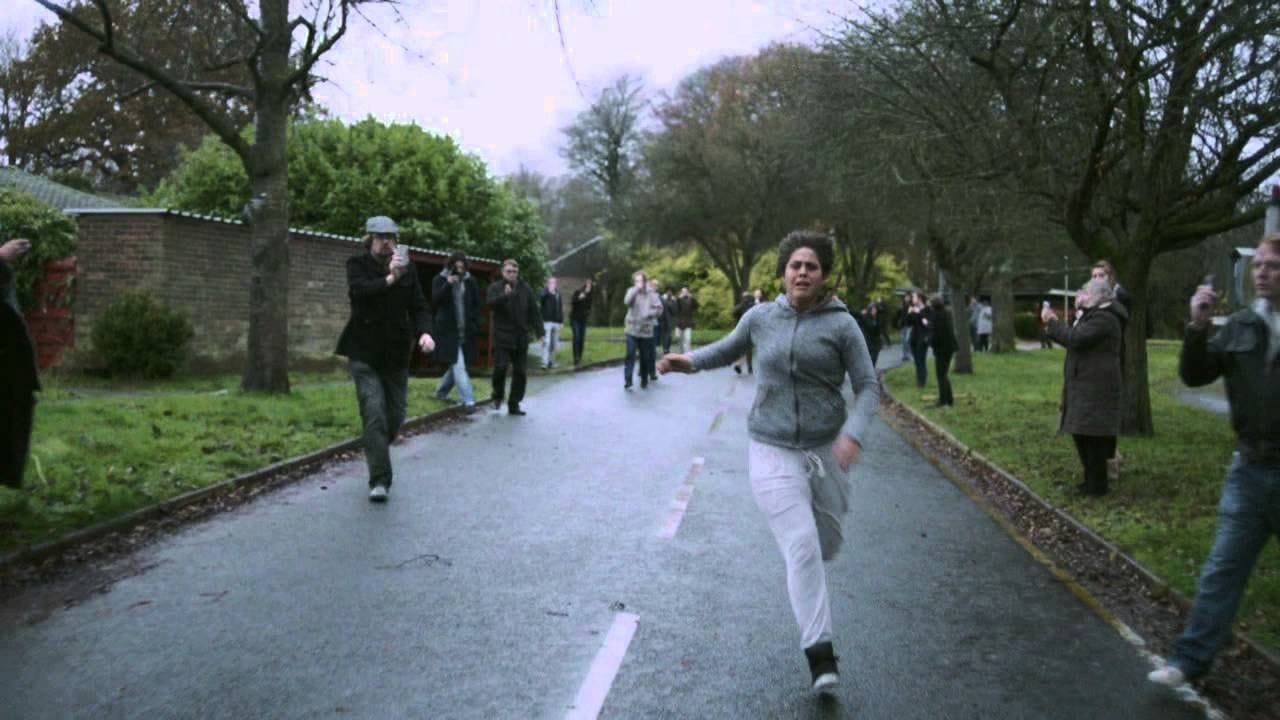 What “White Bear” presents, ultimately, is Victoria’s punishment. This is both severe, and raises some deep questions. She is condemned to awake each day with no knowledge of who she is, or what is going on. She enters a world full of onlookers who will not speak to her, but only film her on their phones, and of masked individuals who at least seem to be trying to kill her. A script is in play: Jem plays the role of a helpful friend, as they try to escape the hunters. Baxter gives them a ride, but then takes them to the woods, where he appears ready to kill Victoria before Jem intervenes. In terms of what we are shown, the climax seems to be Victoria grabbing the gun from one of her assailants and firing it at him, only to see confetti dispelled from the barrel. The curtains open, and Baxter appears with what amounts to a game show mic…The crowd cheers. Her suffering forms the heart of a festival.

There are two main lines of thinking when it comes to punishment: one would tend to see the goal of punishment to be, ideally, rehabilitation; the other would frame issue in terms of retribution. Victoria’s punishment clearly stems from the latter model, which in its most rigorous form would suggest that what a criminal deserves is to have their crime paid back upon them. Further, it involves a clear embrace of schadenfreude—retributivism is often framed as merely a matter of justice, in contrast to a desire for vengeance. But “White Bear” doesn’t shy away from the dark human tendency to take joy in the suffering of another; this is on full display with the inclusion of an audience, and the way in which they participate in the punishment itself. It’s a theme park! 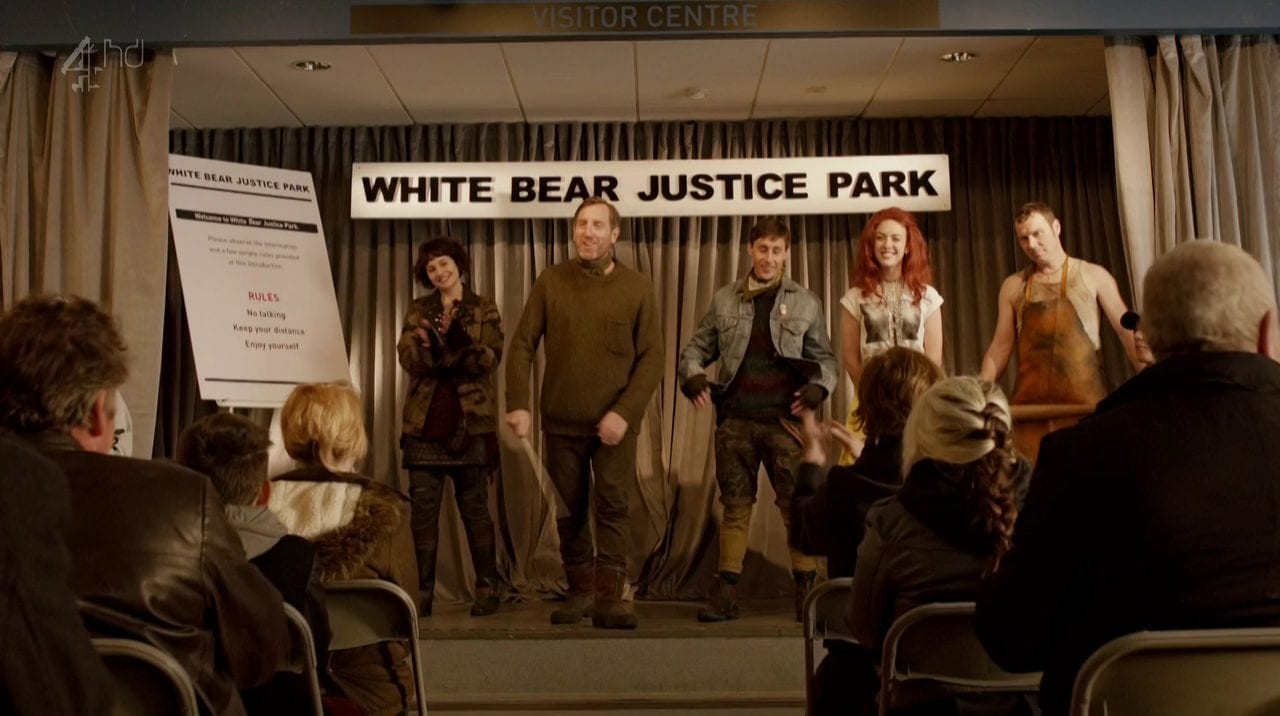 One thing that may strike us as bizarre about Victoria’s punishment is the daily wiping of her memory. After all, one might think the knowledge of the wrong one has done is a key aspect to punishment; that is, that the punishment is intended to drive home this very knowledge. However, following a strict retributivist model, it is not clear that this is a necessary element. The idea is not to rehabilitate the criminal, or “teach them a lesson”—it is to cause them to suffer in proportion to the suffering they have caused.

Thus, Victoria is filmed on phones, as she filmed young Jemima. Her memory is wiped so that she has no idea what is going on, much as a child who is kidnapped and later killed might be expected to be meaningfully unaware of her real situation. Victoria is not being punished for burning the child. Retribution for that would involve burning her. What she is being punished for is filming it, and in this way what is done to her can be seen as roughly equivalent to what she did to another.

We are thus asked to examine our own positions with regard to the question of punishment:

2a) Is schadenfreude a morally acceptable sentiment?

The episode unfolds from Victoria’s point of view, and this establishes a parasocial relationship with her that seems likely to make viewers think of her punishment as unjust, and perhaps it is. I, at least, would view it as such, but now I wonder whether everyone else watched this episode in the same way. Are there those who, upon discovering what we really going on, thought to themselves that she deserved it all?

3) How strong are our feelings of schadenfreude? And to what extent are we willing to admit to them?

Is Nietzsche perhaps right that this joy in making suffer actually lies at the basis of how our thoughts about justice got going in the first place?