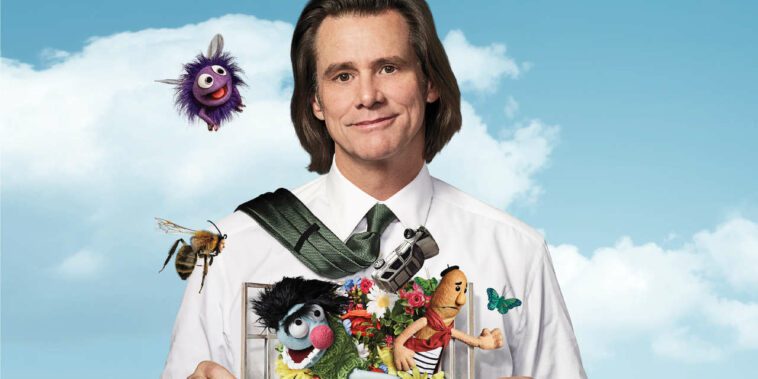 In “Every Pain Needs a Name,” Kidding increases in both intensity and complexity. This episode revolves around the construct of identity; mostly regarding how identity is altered by trauma, but also how identity is reinforced by those around us, whether they are our family or millions of unknown viewers around the world. In this article, I highlight how identity enters into each character’s experience in this episode.

Still struggling with grief, loss, and confusion, Jeff Pickles (Jim Carrey) continues to use Mr. Pickles’ Puppet Time as a medium for psychological integration. Utilizing old characters from his show, such as Thump-Thump the heart, Jeff tries to make sense of and express his various emotions under the guise of trying to help children around the world. It’s not yet discernible whether this motivation to help children is actually real at this point, because the show is still centered around Jeff’s personal struggles. In this episode, Seb (Frank Langella) encourages Jeff to start having sex with female fans who have mailed in letters and pictures to the studio, emphasizing that sex is a “remedy” for his pain. Oddly enough, Seb keeps these letters and photographs in his desk drawer, implying a kind of voyeurism in his character, and maybe even a jealousy of Jeff. Seb also says that when people watch Jeff on television, they see a de-sexualized Mr. Potatohead, and that, “No one sees a man.” Jeff responds, “I am a man. I am. Just a different kind.” Jeff’s words are certainly true—he is different than most men—however, we have yet to see whether or not this difference in character structure will result in a total loss of reality and fragmentation of self.

The Abstraction of Mr. Pickles

For me, one of the most intriguing parts of this episode was Seb’s description of his plans for the abstraction of Mr. Pickles. Seb tries to curb his fear that Jeff has already unraveled by creating multitudes of Mr. Pickles—cartoons, dolls, ice skating shows—which would guarantee the continuity of Mr. Pickles’ Puppet Time via commodification in different media. There is something about Seb’s vision that, at least to me, seems to be more about his fear of death than the continuity of a children’s television character. Maybe Seb identifies with Mr. Pickles, so that in a sense, his continuity is dependent on Mr. Pickles’ continuity—if Seb can control Mr. Pickles and expand his presence in different media, he can stave off death, or at least his anxieties about death and dying. Seb is also clearly identified with the machine of the show itself—he values its stability more than Jeff’s stability, and he also places a great deal of importance on making money, so much so that it numbs him to his family’s suffering. However, Seb continues to increase in complexity in this episode—he is more playful and more parental in this episode than the first two of the series. It remains to be seen whether these fatherly traits will continue to emerge as the series progresses, or if we have to remain satisfied with little glimmers and hints.

At the beginning of the episode we see a woman named Shaina (Riki Lindhome) having sex in a dingy apartment—there are pills, pipes, and vials on the table, and she is wearing a mustache of cocaine. The television in front of her plays Mr. Pickles’ Puppet Time, and Jeff is giving a speech about being your “true self.” Later, we see a time lapse of Shaina turning her life around, which is mostly conveyed through external metaphors––gradual improvements in her apartment and appearance, the disappearance of drug paraphernalia, and making new friends. There is a beauty and a naiveté about Shaina that is endearing, even though her positivity seems to stem from her idealization of neuroplasticity and naming Mr. Pickles as her savior. Shaina eventually meets Jeff in person and tells him that he is the reason she turned her life around. Shaina’s words appear to pain Jeff. Perhaps Jeff is disappointed because Shaina does not realize that she changed her life through her own strength—not his.

Faced with the prospect of her parents potentially divorcing, Maddy (Juliet Morris) begins sporadically raising her arms and screaming in short bursts. Similar to the first episode, Maddy expresses her discontent and confusion nonverbally until she is calmed and held by her mother, Deirdre (Catherine Keener). I don’t know if Maddy will be screaming again in future episodes, but I doubt this will be the last time we see her physically acting out. Maybe Maddy’s screams stem from her inability to understand what a divorce would mean for her family. She is not an adult, and cannot think the situation through, so instead she screams and raises her arms as if she needs help, or needs someone to pick her up. On the other hand, maybe that explanation is too simple. Perhaps Maddy is unconsciously perceiving the impending fall that her family is approaching, and she is simply reacting ahead of time, raising her arms as if she’s on a rollercoaster. Her eyes always seem to be scanning the room when she screams—she is wondering who, if anyone, is watching.

Will (Cole Allen) struggles to balance both his love of, and his frustration with, his father. Will accepts a magic kit as a gift from his father, and then throws it away when he leaves Jeff’s apartment. Later, Will tells a friend that his mother’s boyfriend Peter (Justin Kirk), is “pretty cool” because “he actually sees me” as opposed to his deceased twin brother. Will says everyone—his parents, teachers, and family—see both Phil and Will within him. Will yearns to be seen in his uniqueness and seeks out this experience wherever he can find it. During this conversation, Will retrieves his magic kit from the garbage can. Will is still forming his identity, and it appears as if he is not willing to entirely throw out the influences of his father.

There are several moments in this episode where Jeff seems to slip out of his Mr. Pickles character and into Jeff the human: a much more fallible and equally relatable man. The starkest example of Jeff’s burgeoning humanity is at the end of the episode, where he is seen having sex with Vivan (Ginger Gonzaga), a terminally ill hospital patient who only has six months to live. It was a relief to see Jeff finally enjoying himself, but I also couldn’t help wondering whether this was still Jeff trying to work out the complexities of life and loss. What does it mean to have sex with a dying person? Does it mean anything, really, since we are all dying? Jeff met her in the hospital, while looking for his wife Jill (Judy Greer), and Vivian told him that Jill and Peter were having sex in the employee lounge. Is this a kind of revenge on Jill ? Or is he genuinely interested in Vivian as a human being, rather than a personification of death and dying? Maybe Jeff is actually trying to relate with death differently, since he is, in fact, a “different kind of man.”

This episode leaves many questions unanswered—there are still unexplored motives and unresolved conflicts between characters, and questions of identity abound. At the end of this episode, there are hints that Jeff Piccirillo of Mr. Pickles’ Puppet Time might actually be a retired mercenary or even a murderer. Will’s friends ask him if his father was a celebrated war hero—Will denies this, but earlier in the episode, he and Jeff discussed when they met Nancy Reagan. Initially, I thought this was some kind of meeting to honor Jeff’s work on television, but now I wonder if it had anything to do with military involvement. Ridiculous as that might sound, Jeff has been physically destructive throughout the series: first he shattered a mailbox, then he ripped out a faucet head, and in case you’ve forgotten, Jeff left the oven on in the house next door to his family’s home and gas has been filling it up for days. Jeff Pickles might end up redeeming himself and becoming fully human, or destroying himself and his family. Further, we might end up learning that this seemingly child-like man has a very dark history. As the story continues to emerge with increasing complexity, I am excited to see where Kidding leads us next.