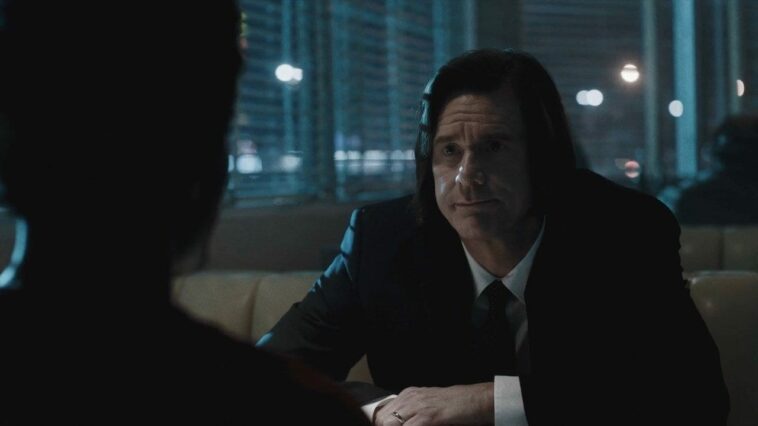 Every great television series has that one episode in their first season that pulls you in and grabs you for the long haul; that episode where the characters and the plot come together in a way that makes you realize that you are committed to this world. That the emotional bond is stronger than with a series you just enjoy—it’s become personal to you in some way. The eighth episode of Kidding‘s first season was that for me. I’ve really enjoyed the seven previous episodes, but “Philliam” has deepened my commitment to this series.

We opened this week’s episode with the aftermath of Jeff’s meltdown last week. The office was destroyed, and Jeff was sitting there, exhausted from the rage and unable to stand. Derrell, the crew member that we’ve only seen sparingly, but never in a meaningful way, looks in on Jeff and is speechless. At this moment, we entered a flashback in which we will spend almost the entire duration of the episode.

The flashback showed us exactly what life was like for Jeff before his son Phil died tragically, and his marriage fell apart. We see Deidre happy and in her element. We see Seb as more of an outside influence, and not nearly in the position of control he currently is in. We also get to see the impact Jeff Pickles can have on people, and what it looks like when that level of positivity and compassion is paid forward.

The flashback opened with a scene in Jeff and Jill’s bedroom and showed their relationship being loving, sexual, playful and fun before they headed downstairs to join their twins, Seb, Deidre and her family. The twins were performing a magic trick, but Jeff was off in his own world, deep in thought about a man on death row he had been pen pals with who was scheduled to die soon. In this scene, and throughout the rest of the episode, we saw that the dynamic between Jeff and Phil was the most strained, as Phil wanted the attention his father was giving other people and acted out as a result. Often times to a child, negative attention is better than no attention at all. While Will prior to his brother’s death seemed to want to follow in their father’s footsteps, Phil had deep-seated resentments; resentments that both Will and Jill would take over after Phil’s death. It’s almost as if part of their grieving process includes finally understanding how Phil felt about his father while he was alive.

The flashback saw Jeff struggle with whether he should attend his pen pal’s execution, as was requested of the man being sentenced to death. Seb and Jill both encouraged Jeff not to, and Jeff was on board with this until he, along with his family, took the wife and son of the man being executed out to dinner. It was during this dinner that Jeff became overwhelmed with compassion for the man’s son, Derrell. Listening to Derrell recount his father’s tragic tale had me as a viewer, stop and take pause. If someone I loved deeply committed a heinous crime, how would I react? How would I be able to separate the person from the action? Would I be able to look at who they were and see what lead them to their breaking point? It’s moments like these that make this show special, and Jeff, the character, was just as moved as me, the viewer. Phil was not, and asked a series of inappropriate questions, prompting Jeff to take him from the table and scold him. Later we would see Jill and Jeff discuss this, with Jill mentioning to Jeff that it’s not easy being Jeff’s son, a feeling she has also vocalized about being Jeff’s wife.

Jeff would go against his family’s wishes and attend the execution after being moved by Derrell and his story. Derrell did not attend, but did see his father one last time and asked him why Mr. Pickles of all people. His father explained that he wrote three letters and Jeff was the only one to respond. As he spoke, you could see that their correspondence over the years had a positive impact on him, and that heading into his execution, he was reflecting fondly on this friendship.

After the execution, Jeff found Derrell alone at a diner and sat with him. Derrell’s father had told him he wasn’t going to heaven, but maybe he could go to Pickleberry Falls when he died, and those words meant something to Derrell, as the flashback ended with him going to work with Jeff. In a beautiful twist, just as Jeff had been there for both Derrell and his father at the lowest points of their lives, cut to modern day and now it’s Derrell there for Jeff post-meltdown when he needs a friend more than ever. The power of positivity is being repaid to Jeff, his actions and their lasting impressions on people meaning that he has someone to help him get up when he’s down. People helping people—the idea that if we spread goodness throughout the world it can continue to be passed on, with every smile, every kind word or helping hand making the world a better place, little by little—is at the heart of the Mr. Pickles character, and it was on full display here.

I never knew that I needed to see Jeff’s family all together, but I’m delighted I saw it. Seeing Deidre happy, pursuing her goals of helping those in need, completely in her element and away from the family business, gave me hope for her. Seeing Jill meet Peter before Phil’s death, back when she was happily married, gave that relationship more context. Really though, seeing the troubled dynamic between Jeff and Phil is what I’ll take away most from this episode. Parenting is tough; it really is. Growing up is difficult too. Father and son were at odds a lot, and how that factors into Jeff’s grief is an added dimension to what’s already been a powerful narrative. Seeing the changes in Will, going from wanting to be his father to taking on his brother’s persona, makes my heart ache more for him. He’s trying to cope but damn, it has to hurt to be him.

Finally, Jill. We saw how much she loved her husband, and we saw the warning signs she gave him when it came to his relationship with Phil. Jill’s pain took on new layers throughout this flashback, adding to an already masterful performance from Judy Greer this season. This episode brought us closer to all of the main characters, made us feel their pain a little bit more, and showed us what life was like for them before tragedy befell their family. Now the question is, what will their lives look like as they begin to heal?