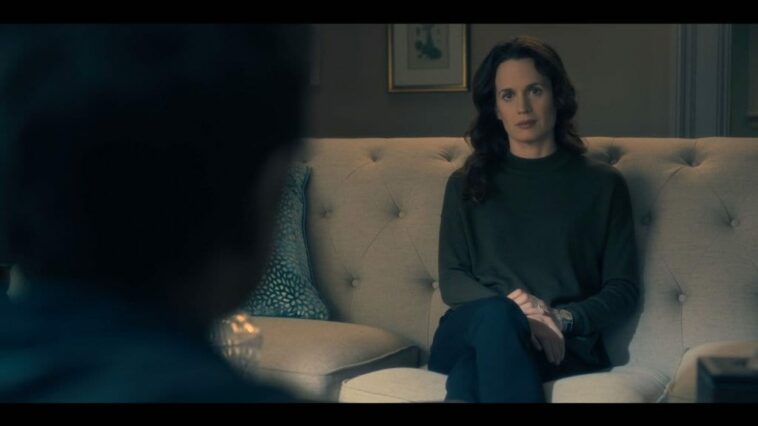 One of the most chilling and talked-about series to hit our screens this year is The Haunting of Hill House. Our writers have decided to turn over a few rocks and do some digging with in-depth profiles of the main characters in the show. Who knows what they might discover? So, draw the curtains, turn out the lights, and tuck in for Part Two of Five in 25YL’s look at the Crain siblings from The Haunting of Hill House, as J.C. Hotchkiss discusses Shirley.

I went into The Haunting of Hill House not knowing what to expect. I take that back; I knew that there would be ghosts and a story about a family, but I never thought I would watch and discover some of my own “ghosts” in the process. Although there were many actual ghosts of Hill House, what I found most interesting was the Crain family’s metaphorical/emotional ghosts and the way these ghosts haunted their lives long after their time at Hill House.

Shirley Crain, the eldest daughter of the Crain family, is a bright, intelligent, curious capturer. She loves photography and is protective of her family. Family is what means most to her, as we see in many ways from the flashbacks. As a child she wanted to save a box of kittens. When one dies and she, Hugh, and Olivia have a little funeral for it, Shirley thinks it’s still alive. At that moment, I knew that feeling. She’s clinging to the hope that she succeeded in keeping the poor kitty alive. To her (and our) dismay, a beetle had been inside its little body and that caused the movement she sees in the kitten’s throat. I love how this is echoed in the scene with Shirley with Nell in the embalming room. Shirley feels she failed to protect Nell. She wasn’t able to fix the darkness of the world for her. She does not want to believe her baby sister is gone. Again, that blasted beetle comes out from Nell’s lips: a haunting reminder of the finality of Nell’s death and Shirley’s inability to save her. 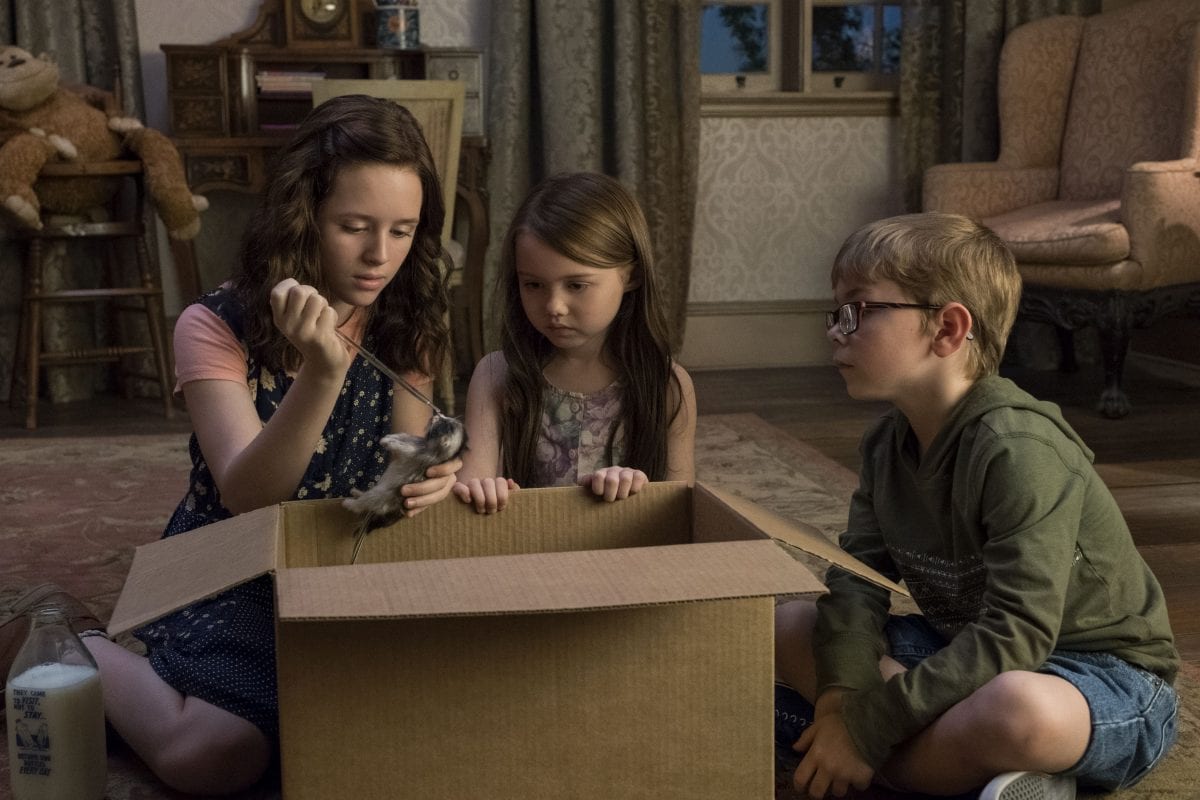 Another flashback that also mirrors present day comes when Shirley realizes only one kitten is left alive. When the kitten opens its eyes, they are white and cloudy; the kitten appears to be blind. To me, this kitten represents Steve and his inability to believe what is happening around them. This is why adult Shirley fights Steve so much about his book; how can he exploit their family with his take on what happened when he was too blind to see it? She has a point, since he never had interactions like the other Crain siblings. She cannot change his mind. She cannot fix it. This is where we discover Shirley’s step in the grieving process: anger. She’s angry. She’s fearful. Fearful of what, you may be asking? Shirley fears death. 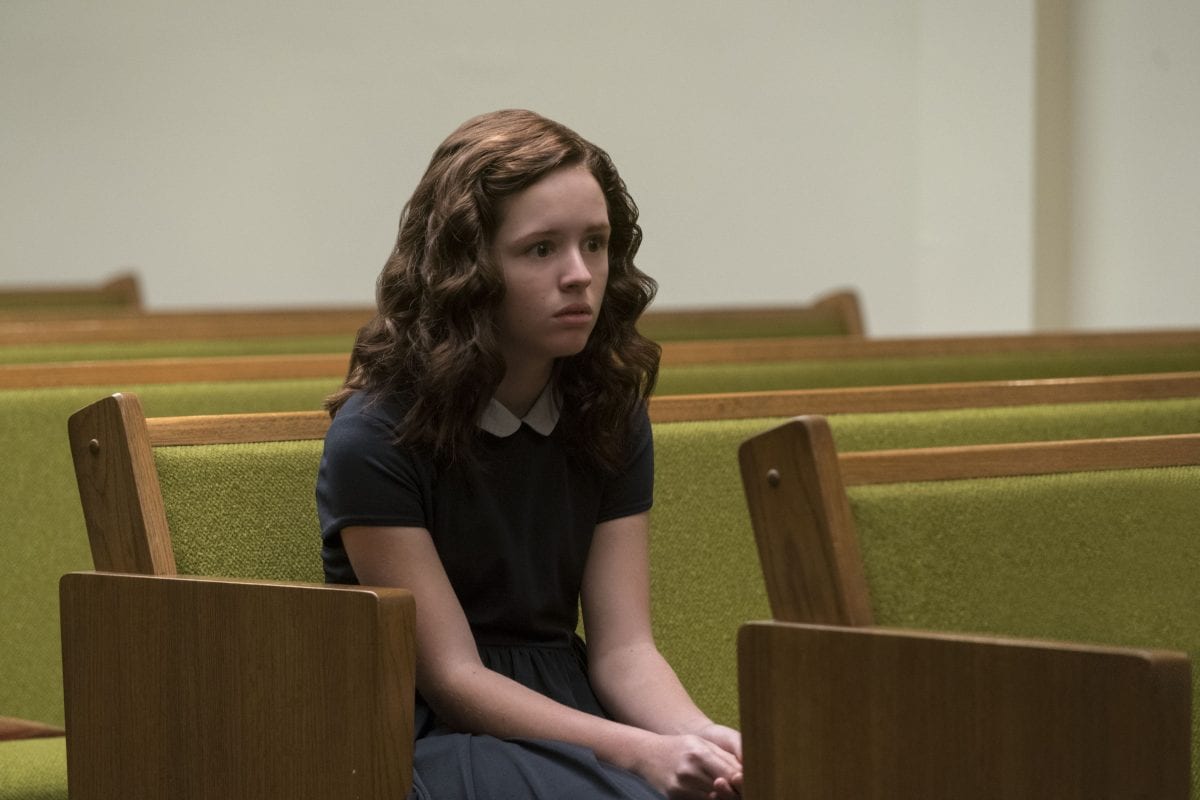 Shirley grows up and becomes a mortician, which is not surprising to me. Shirley is a perfectionist. She wants to shield others from the pain of having to say goodbye to their loved ones by making sure everything is perfect. She is a fixer. This is why the moment with the mortician at her mother’s funeral is so important. We see one of Shirley’s fears play right out in front of us at this moment: the finality of death.

You may be asking, “J.C., if Shirley fears death, why would she ever become a mortician?” It is in her fear of death and with her surrounding herself with death constantly that makes her become the ultimate protector of—and empathetic with—others having to deal with the grief of losing their loved ones. Immersing herself in it brings her closer to an explanation about death, but she does not have to face her own fear in the process. Like I said earlier, she is a fixer. She comes from a fixer (Hugh), whether she wants to admit that or not. I mean, Hugh was the ultimate fixer, even literally as a house flipper.

This is never more evident than when we meet the family for a service Shirley is performing. Just like Hugh tried to shield his children from the pain of what happened to their mother, Shirley tries to shield a little boy from the pain of going through the viewing process. The little boy says that his grandmother is coming to visit and that she does not look like how he remembers her, so he does not want to see her in her casket. Shirley tells him how she will “fix” her: “It’s a great chance to take all those pictures in your head…and cover it all up with a better picture.” A photographer always, except now she’s a photographer of grief and death, instead of life and living.

Let me stop here for a moment and just say that I adore Elizabeth Reaser. Her portrayal of Shirley is incredible. She embodies anger in a way that I completely empathize with. To use a phrase from Hill House itself, she does not portray anger as a “screaming meemie.” It is much more layered and nuanced.

Shirley’s relationship with Kevin is interesting. She is abrasive to him in a way that does not seem necessary. From their interactions at the beginning, you can see love and caring there, but there is this tone she takes with Kevin that festers as a type of anger—flippant anger, but anger nonetheless. We soon realize from Shirley seeing her personal demon materialize in the form of the “ghost” (who I deemed “Scotch Man” but who, when looking up on IMDb, is named Ryan, played by One Tree Hill’s James Lafferty) that her anger has not only been manifested by her time at Hill House, but from her own indiscretion. My anger was brought about not from an indiscretion, but a marriage that did not work out. My new husband took the brunt of that anger in the beginning of our relationship, not because he did anything that made me angry, but because I was angry at myself. I was angry at the time I spent in a marriage that was destructive and I did not want to blame my own decisions for that, so I projected that anger onto my new husband.

Shirley projects her anger at not being able to fix everything—including her siblings lives—and puts it on the people she loves most. Shirley does not want to feel the nothingness that comes from losing someone you love. She loved her mother and lost her. She loved her baby sister and lost her. If she confronts her indiscretion and lets Kevin know what she has done, she may lose him as well. She shields herself with the strength of anger. Her anger keeps her company and attaches itself to her, so it becomes a part of who she is. This manifests as the know-all, know-better perfectionist we see, but the truth is she does not know all, and this is most evident in her relationships with her siblings.

With Steve, it is the exploitation of their story and her inability to convince him not to publish the book. With Luke, it is his addiction that she cannot fully grasp, no matter how much money she throws his way in the form of rehab or helping him back on his feet. With Theo, it is judging the way she treats people and the relationships in her life. With Nell, it is accusing her of “knowing better” about how her suicide would affect the family. All these are ways to deflect the feeling of anger and the pain she is going through and put it back on the others. None of these things are Shirley’s fault, but she takes on the guilt and anger because she is not able to fix these problems for them.

She cannot cure Luke of his addiction. She cannot bring Nell or her mother back. She cannot stop Steve from publishing the book on Hill House. She cannot tell Theo what to do or how to treat others. She cannot fix anything for them. The only person she can seem to control is Kevin, and even then Kevin takes the “blood money” from Steve’s book behind her back because Kevin is well aware that Shirley will completely disown him if it comes to light. Of course it does, in extravagant fashion, and once again Shirley’s anger saves her from truly having to deal with the feelings of loss over Nell. As it replaces her grief with the anger of finding out that everyone did in fact take the money. Once again, this is something she could not fix. 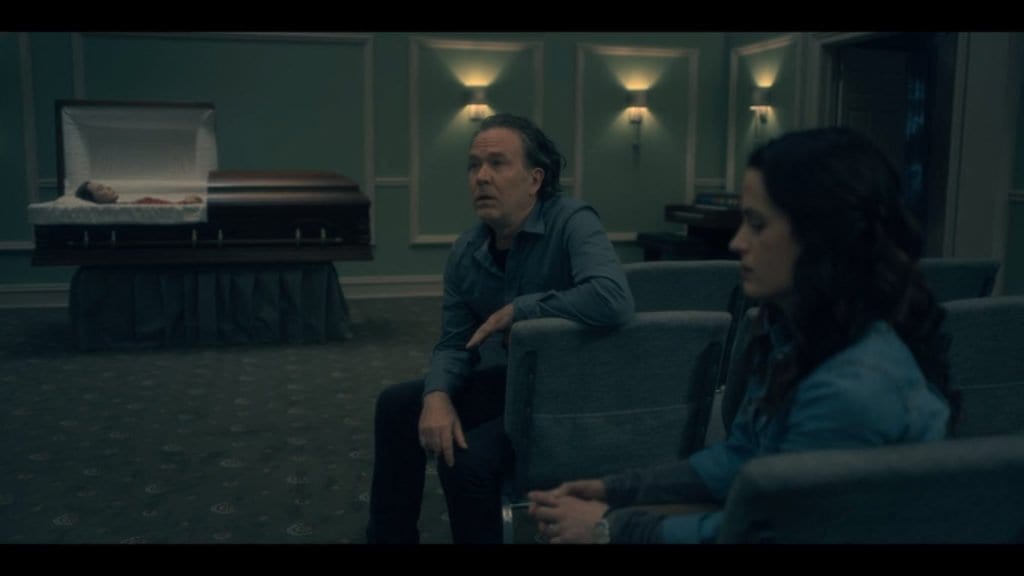 At the end of the day, Shirley is someone who feels it is her responsibility to take care of everyone else. If she does that, she does not have to think about taking care of herself. She can just carry on and not have to dwell on how she feels about everything that is happening around her. Her “ghost” cannot touch her if she is busy fixing everyone else. This is where I felt the most kinship with Shirley. She is someone who cares, maybe too much, but wants others to not have to feel any pain. She takes on that pain and internalizes it as anger, so the other person or people will not feel any pain. The problem is that while she may be able to do this successfully as a mortician, she fails within her own family, and this is why her anger remains. Until Shirley is able to forgive herself for her indiscretion, and stop thinking she could have changed the outcome to what happened to her family, the anger is going to stay, fester, and haunt her like the ghosts at Hill House.

Catch up with our overview of The Haunting of Hill House from last week, Part 1: Steve and come back next week for Part Three: Theo.

J.C. Hotchkiss is a Office Manager by day and Managing Twin Peaks Editor for 25YL Site the other 16 hours of the day. When she isn’t writing of her love of FBI Agents with a penchant for doughnuts, coffee and pie, she enjoys getting lost in a good book, sipping a damn fine glass of wine among friends, chatting with her "TB's" about Cevans and Fleabag's Hot Priest, and trying to keep up with the latest cartoon craze via her 6 year old. She lives smack in the middle of the Big Apple and Beantown, so for a girl with many different interests and tastes it's the perfect place to be.