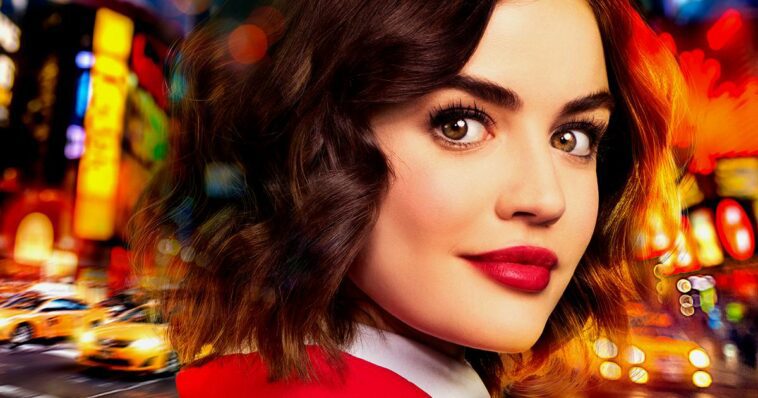 Per CW press releases, “the musical dramedy chronicles the origins and struggles of four aspiring artists trying to make it on Broadway, on the runway and in the recording studio.”

Lucy Hale is best known for playing Aria Montgomery in Pretty Little Liars and the lead in Blumhouse thriller Truth or Dare. Her new role, Katy, is a twenty-something who works as a personal shopper while aspiring to be a fashion designer, and she’s set to navigate friendships and dating in New York City.

Hale handily mastered the moody drama in Pretty Little Liars for seven seasons, and anchored the show’s romance as well with Aria and Ezra’s will-they-won’t-they relationship that stretched from the first episode to the last. Based on this track record alone, I have a good feeling about Hale entering the Riverdale universe.

I suspect every episode will have a musical number sang by the cast. Hale has a music career of her own which she’s been building since before her first acting role. And of course Josie McCoy is on the show as well, and she needs to get a second round of pussycats (Val and Melody will not be forgotten!).

And if the show goes full-on musical a la Crazy Ex-Girlfriend, I wouldn’t be opposed to it. After all, it’s set in New York and Broadway’s right in the plot synopsis. If Chilling Adventures of Sabrina can be spooky and supernatural at its root and Riverdale can be laced with noir, why can’t Katy Keene have its own vocabulary for its mission statement?

Ashleigh Murray is reprising her Riverdale role of Josie McCoy here, and will be mixing it up with Camille Hyde and Lycien Laviscount, who are respectively playing competitive siblings Alexandra and Alexander Cabot. Alexandra’s a socialite and Senior Vice President in her father’s company, while Alexander is trying to revive the company’s record label—which is how I assume the siblings will cross paths with Josie.

Rounding out the main cast are Jonny Beauchamp—who plays Jorge, a worker at his family’s bodega by day but by night performs and bartends as his drag alter ego, Ginger—and Julia Chan—who plays outrageous ‘It’ girl Pepper Smith who may have secrets under her outward facade.

Maggie Kiley is directing the Katy Keene pilot. She previously directed Scream Queens and American Horror Story, and is well versed in the visual language of Roberto Aguirre-Sacasa’s Archie Comics television properties, having directed episodes of both Riverdale and The Chilling Adventures of Sabrina.

Robert Aguirre-Sacasa and Michael Grassi will write the pilot and executive produce along with Greg Berlanti, Sarah Schechter, and Jon Goldwater. Berlanti Productions will produce in association with Warner Bros. Television.

John Bernardy has been writing for 25YL since before the site went public and he’s loved every minute. The show most important to him is Twin Peaks. He is husband to a damn fine woman, father to two fascinating individuals, and their pet thinks he’s a good dog walker.