Death comes for us all…and even then, there isn’t any peace for the departed. Shadow and Laura Moon both learn this in very different ways over the course of Episode 5 of the second season of American Gods.

Still in Cairo, Shadow continues to have uneasy dreams. The episode opens with him dreaming of an African American man being wrongfully killed for a crime he didn’t commit. Shadow sleepwalks to the bathroom and takes a straight razor to his throat while the mirror shows his head burning and his body riddled with bullet holes. “Memento mori,” the ghostly figure whispers to Shadow before disappearing.

Mr. Wednesday, on the other hand, has godly business to attend to. This starts by pissing on a tree sapling that may or may not be Yggdrasil, the world tree. Next, he’s off to find his spear, so he flirts back and forth, leaving Shadow and Mr. Ibis to their own devices. Wednesday mentions that Ibis can teach Shadow the ways of the dead, which he needs to know. After all, Laura is dead. 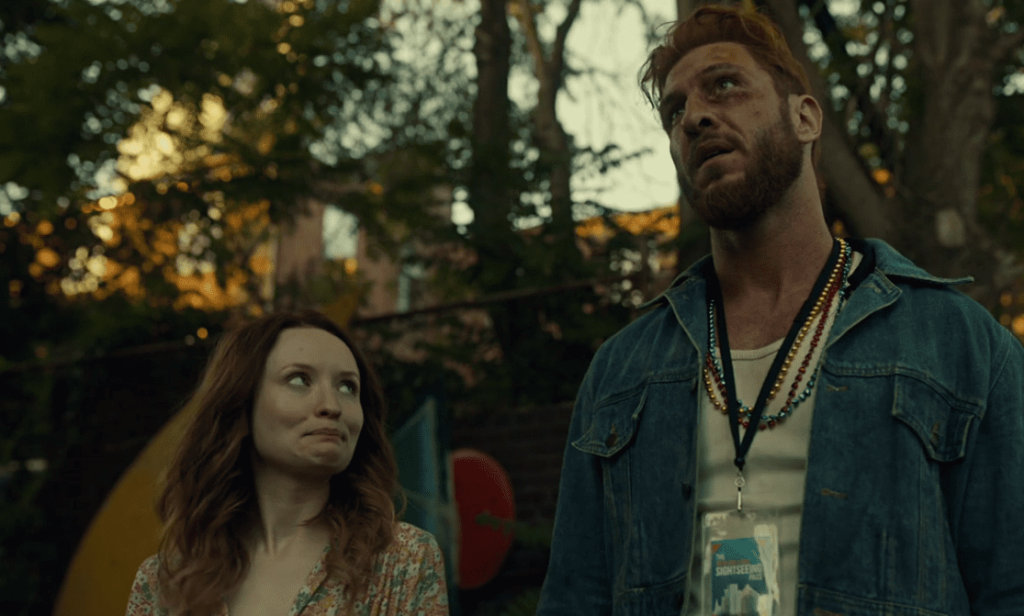 Speaking of Laura, Mad Sweeney finally makes his way to New Orleans, and the dead wife who has his lucky coin in her belly isn’t far behind, although she’s looking much more fresh after killing Argus. The two head to parlay with loas Baron Samedi and Maman Brigitte.

Out on the road, the Jinn and Salim wait with Wednesday’s spear. The two discuss how Salim can believe in one god, especially one who has seemingly forsaken him. This is a thread we’ll pick up later in the episode. Wednesday’s late but tells the pair it’s time to visit the king of the dwarves, having them leave their motorcycle behind.

Back in Cairo, Mr. Nancy continues to watch how things play out for African Americans, and just like clockwork, another one is snatched, just as Nancy elegantly explained in last week’s episode. In truth, this feels like a continuation of that conversation, but to what end and why? The answer becomes clearer back at the morgue. When a young drug dealer’s body is brought in, it bears the same wounds of the man in Shadow’s dream from the night before. “Ah, Froggy James,” Ibis explains. He gets into people’s heads and manifests his wounds on African American male victims after they pass.

On the way to the king of dwarves, they discuss Salim’s faith in one god and the differing levels of belief. While he believes all he’s seen, he only worships Allah. Wednesday quips the gods need more believers like him.

Ruby Goodchild wants to leave Cairo, but her Reverend wants her to stay in Cairo because now her grandmother and brother are gone. Bilquis tells her they should not leave just yet.

Wednesday makes it to Alviss’ and he tries to strike a bargain with him to help repair his battle spear. Alviss won’t have it, saying he is a builder, not a fighter. They discuss his spear, saying the runes are being rubbed away and need the most care from the likes of Dvalinn.

“Like all things, runes fade. Rubbed clean by the friction of time and the fading of memory.”

So it’s a draw and Wednesday makes the Jinn’s motorcycle appear, asking Salim if he believes now. Salim refuses to worship again, saying Wednesday’s truth is not his own. The Jinn stops him there.

“You’re entitled to your own truth, but not your own facts.”

The Jinn takes it further, calling him stubborn and blind, but asks if he still wants to tag along. Salim is silent but resolved not to part ways just yet.

Down in New Orleans, the deal is struck. Baron Samedi will brew a potion to help Laura live but she must tell him a truth. As the night wears on, Maman Brigitte and Mad Sweeney head outdoors while the Baron gets to work.

In Cairo, Shadow is still trying to figure out why Will James would have cursed his own people. Ibis and Shadow talk some more when Mr. Nancy appears and tells Shadow he keeps asking the wrong questions. That sends Shadow to the heart of town, where he sees Will James’ flaming head on a pole and lets him in. Nancy accuses Ibis of using Will James as a way to keep business booming while killing off Nancy’s worshippers.

Back in New Orleans, the mismatched couples talk and tarry. The Baron says two drops of blood from Laura’s true love is required for the potion to work but there will be consequences if she loves another. The loas true plan is revealed through seduction. In the haze of sex and magic, it becomes clear what Laura and Sweeney both want: each other. Baron and Maman both laugh through the haze and heat.

It’s finally time for the funeral in Cairo. The Reverend has turned and feels hopeless and that nothing makes sense. He tells Ruby to leave and if she finds a safer place, that he wants to know about it. Ibis then opens the floor to further words and the possessed Shadow takes the pulpit, eyes full of Will James’ fire.

“Now I look into the soul of death and I welcome it. Memento mori.”

Later on, Shadow asks for answers, but Wednesday, Nancy, and Ibis only make him feel foolish. “Fuck you,” he says, leaving them to their beer, with the world tree in the background, growing quickly.

The next morning in New Orleans, Laura wakes up alone and pockets the potion. Mad Sweeney reminds them of their deal, but Laura says it’s off and that she’s keeping his coin. Laura goes on to point out that this is all Wednesday’s doing, trying to keep her and Shadow apart but Mad doesn’t agree, saying it wasn’t part of the plan. He also reminds Laura he does Wednesday’s bidding because he owes him. Laura hits him with a parting shot that he’s a coward and leaves. He curses her but knows he can’t be without her.

More and more, I’m believing it’s impossible to judge American Gods on an episode-by-episode basis. I almost want to withhold judgement until the season is finished to see the broader brushstrokes.

Having said that, the last episode felt like it bled into this one with its continued commentary on race and Candyman-esque spook (all that was missing was the bees). It felt like it lingered too long and still we don’t know what’s next for Shadow or the handful of African gods who may or may not be fighting in Wednesday’s war.

Then there’s Laura and Mad Sweeney hate-fucking in a haze of voodoo magic. It wasn’t surprising as much as it was inevitable, but how will that play out for Laura and Shadow (although, let’s not forget his nocturnal encounter with Bast). The gods are having their ways with the Moons, in more ways that one. And what’s true and real varies based on which god you ask. Everyone wants you to believe but they also want your soul. Truth is tricky business, especially for Laura, who dodges consequences like stray bullets.

And Laura Moon. She’s been dead this whole time and she’s still a piece of work. Shadow’s love for her makes her much more sympathetic on the page, but here, she’s infuriating. I don’t think she loves Shadow or Mad or even herself—and she’s still DEAD. She needs a literal Come to Jesus moment (all puns intended) if she’s to truly help Shadow when the time comes.

As for her husband, Shadow continues to look death and gods in the faces while still not understanding his purpose, even if Wednesday is leaving clues left and right. Nancy calls Shadow out for asking the wrong questions and he’s right. By now, Shadow should be hip to something, and so should the audience, whether or not they’ve read the book.