In America, it seems everyone’s chasing a dream. That rings true for both old and new gods, even in the sepia-toned days gone by. This week’s episode of American Gods, “Donar the Great,” opens in the 1940s, giving us a glimpse back at what life was like for Mr. Wednesday and family, or in this case, Donar (or Thor, as he’s more commonly known). Wednesday is the emcee of Regius Theater, surrounded by glittering burlesque dancers and making his son Donar and Columbia (the personification of America herself) as his leading acts.

Then he wakes up. He and Shadow are on a mission to get his spear fixed and they’ve landed at one of America’s dying dreams: the mall. Together, they work to  track down Dvalin, who can repair the runes on Wednesday’s spear. After Wednesday remarks on the slow decline and demise, Shadow reminds him to hold his bark because it’s a respectable neighborhood. Wednesday says something that gives Shadow pause:

“Sometimes you remind me of my son.”

Meanwhile, Mr. World is ready to get war well underway by harvesting New Media’s upgraded powers. She complies by turning up the fangirling and is rewarded with all the emojis. 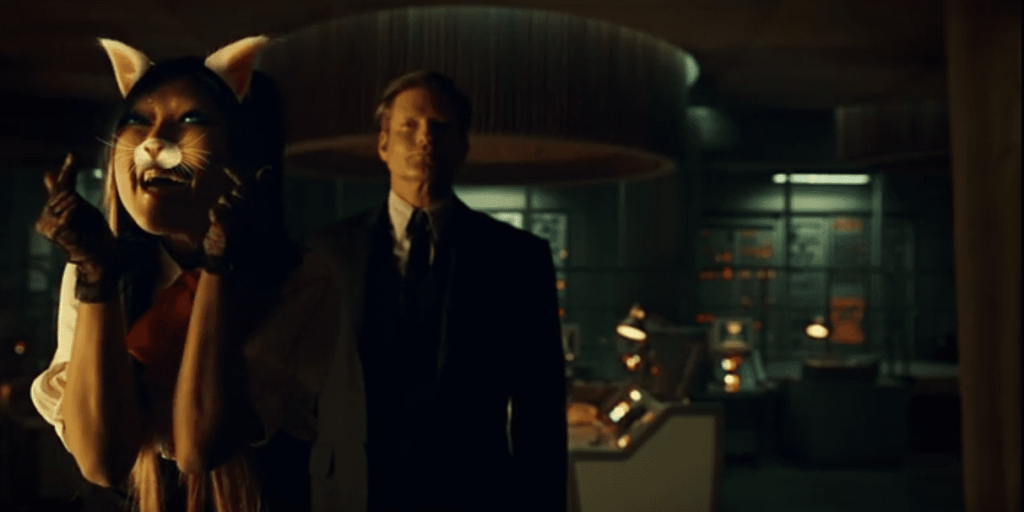 Back in the past, Mr. Nancy’s working for Wednesday backstage at Regius Theater and is still at it with the anger and sass. He bangs on Columbia’s door, saying he needs her to get on stage (and he wants his 20 percent cut of her worship). She’s got other ideas and wishes her and Donar could run away to California. Donar says he can’t abandon Grimner (aka Mr. Wednesday) due to the contracts they’ve signed.

Wednesday is working the crowd when he spots a new high roller—who turns out to be the first manifestation of Technical Boy (he returns!) after the launch of the telephone. The two bicker for a bit about who’s better and Tech Boy tries to leave but Wednesday twists his arm to stay. Donar goes on and Wednesday gets sidetracked by an American Nazi (“a friend of new Germany”) when he mistakes his armband for a symbol of one of the old gods.

In the present, the dwarves are driving a hard bargain. Sindri says no can do unless Wednesday can track down a magical item at the mall’s music store: Lou Reed’s leather jacket. Wednesday refuses to pay, so that leaves him and Shadow to con their way in and out of the store with the jacket.

In the past, Wednesday cons Donor into joining the American Nazis. They want to clean him up and make him the portrait of American strength: suave, good looking, well-mannered. Columbia remains cautious, but hopeful that once that contract’s up they can head out West. She takes the stage, doing a burlesque performance to “Don’t Fence Me In,” the most appropriate metaphor for America I’ve ever heard. She catches the eye of Technical Boy, who changes his mind about Wednesday and wants to make a deal.

Back at the mall, Wednesday and Shadow pull of the perfect con. Wednesday poses as a Lou Reed–loving priest who has just enough cash to buy the jacket, but before the transaction is up, Shadow shows up as an undercover government official, saying the priest is a conman and paying with forged bills. Since he’s handcuffed wearing the jacket, it becomes evidence, and they make off with it and all the money they put down. Shadow tries to dive deeper into who Wednesday’s son was. Wednesday artfully dodges the question and asks to be unhandcuffed. 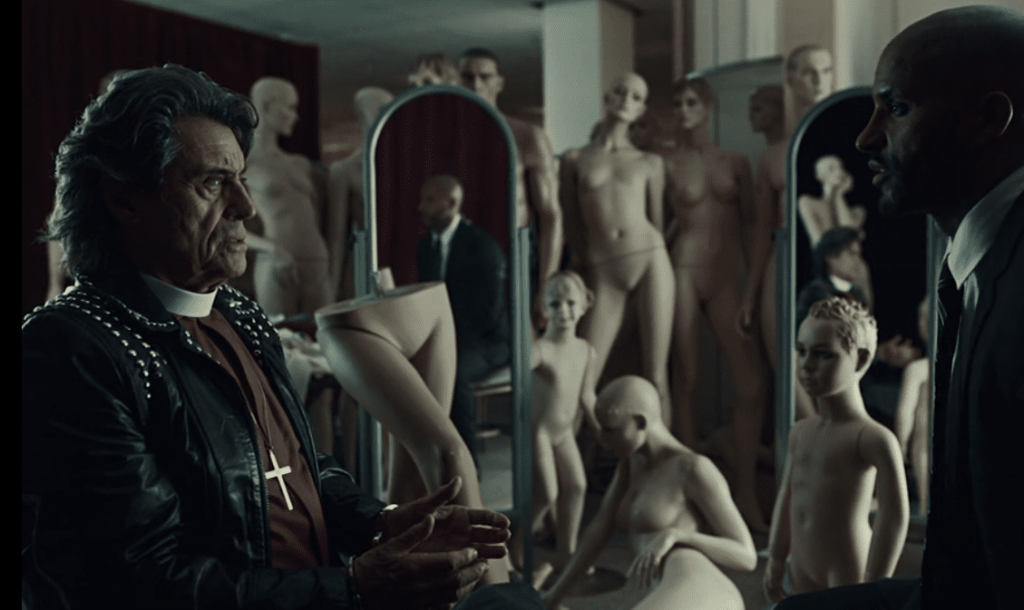 “There are certain deaths our kind cannot come back from.”

We discover the deal with the American Nazis was a bad one, and down the line, they demand that Donar lose to Germany on purpose, which he doesn’t want to do. Nancy reminds him he’s playing a rigged game and giving away his worship.

Lou Reed’s jacket does the trick and Dvalin restores Wednesday’s staff to its former glory. At Black Briar, Mr. World senses this development and promises New Media additional tech support so they can get on with this war. 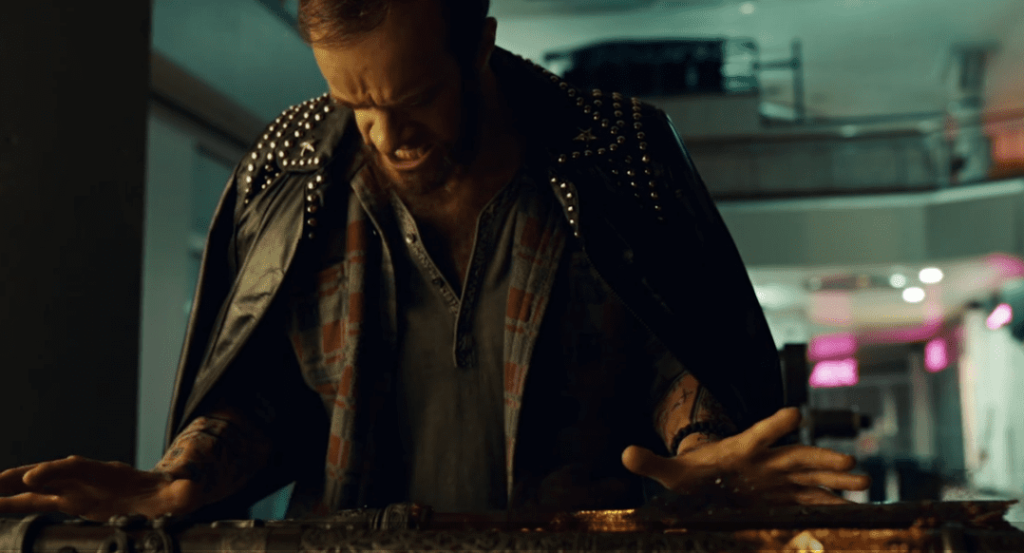 In the past, Donar decides it’s time to take Columbia up on that offer to go West. They plan to run off together after her last show. Wednesday has eyes everywhere (thanks to his ravens) and he drives a wedge into those plans by hooking Columbia into a deal with Technical Boy to be the new poster girl of America and saying that Donar has left to complete his competitions without telling her.

Backstage, Donar waits in the alley for Columbia. Wednesday finds him and they quarrel, with Donar reminding him that humans should worship them, not the other way around. Wednesday lies and says Columbia isn’t coming and Donar must see the match through. Donar hits him where it hurts, saying there’s no show without him. Wednesday calls him a coward and in the “backstage” they fight with spear and hammer. Donar’s strength is more and we see how and when his spear was broken in half. Amazed, Wednesday exclaims that he cannot walk away from wielding such power, but that’s exactly what he does.

On the way to destinations unknown, Shadow apologizes to Wednesday if he upset him. Wednesday says it’s just ghosts from the past and reveals that Donar killed himself not long after, a poster of the lost Columbia (now Rosie the Riveter) doused in blood from the impact. The episode closes with Wednesday mournfully singing “Brother Can You Spare a Dime,” on his empty theater stage:

“Once I built a tower up to the sun

Brick and rivet and lime

Once I built a tower, now it’s done

Brother, can you spare a dime?”

This episode makes a privy to more of Wednesday’s backstory while also serving as a mirror for events that have not yet transpired. In the past, Wednesday lost his son because he could not understand that all children must go their own way and that sometimes faith is not enough. Will the same happen for Shadow, whom he claims is strong in body and belief? Has Wednesday learned from his past failings? We’ll have to wait and see.

Learning more about Wednesday’s past made him more sympathetic, albeit frustrating because he sells his own son out to the Nazis. Like humans, it seems gods aren’t even immune to making bad decisions. Outwardly, he says he regrets nothing, but we can see through the lie. What’s the American dream without blood, sweat, tears, and sacrifice?

We as viewers also get to see America herself personified as a deity of sorts via Columbia and see how the country is so vast that she could lose her crown to Lady Liberty (thankfully Tech Boy provided the save late in the game).

For me, this episode really stuck in ways others haven’t. Seeing old gods like Wednesday and Nancy struggle and adapt shows just how long they’ve been at this game and what they’re up against with the new gods. And all the razzle dazzle of an alternate 1940s America filled with gods conjured up references to another favorite of mine: Alan Moore’s Watchmen. The sepia glow of the past reminded me of the opening credits sequence of Watchmen in the best way but instead of Minutemen being inserted into iconic American events, we have gods hoping to live their best lives.

This episode felt tightly woven with the past and present flowing together effortlessly. This is no doubt due to Rachel Talalay’s brilliant direction. She’s directed some of the best episodes of Doctor Who and I’ve been waiting all season for this episode. It was worth the wait, and I was left wanting more and wondering how much more ground we’ll cover before the season finale.