Memory’s a funny thing, and American Gods’ penultimate episode “Treasure of the Sun” takes a deep dive into Mad Sweeney’s mind before he tries to settle up with Mr. Wednesday. Last time we saw him, Mad Sweeney and Laura Moon parted on bad terms in New Orleans. Laura kept the coin, of course, and Sweeney cursed her house.

Somehow, Sweeney found his way back to Cairo, but he’s in bad shape. Shadow finds him under a bridge and jokingly calls him a troll, to which Sweeney replies:

This statement is the lynchpin for the whole episode that’s about to unfold. Sweeney laments on his bad luck for every time Laura gets farther and farther away. As he tries to roll a cigarette, he sees ants crawling on his hand and freaks out. Shadow wants to know where Laura is and after handing over a twenty, Sweeney reveals he has no idea, but had hoped she’d been headed Shadow’s way. Then Sweeney warns Shadow again about Mr. Wednesday. 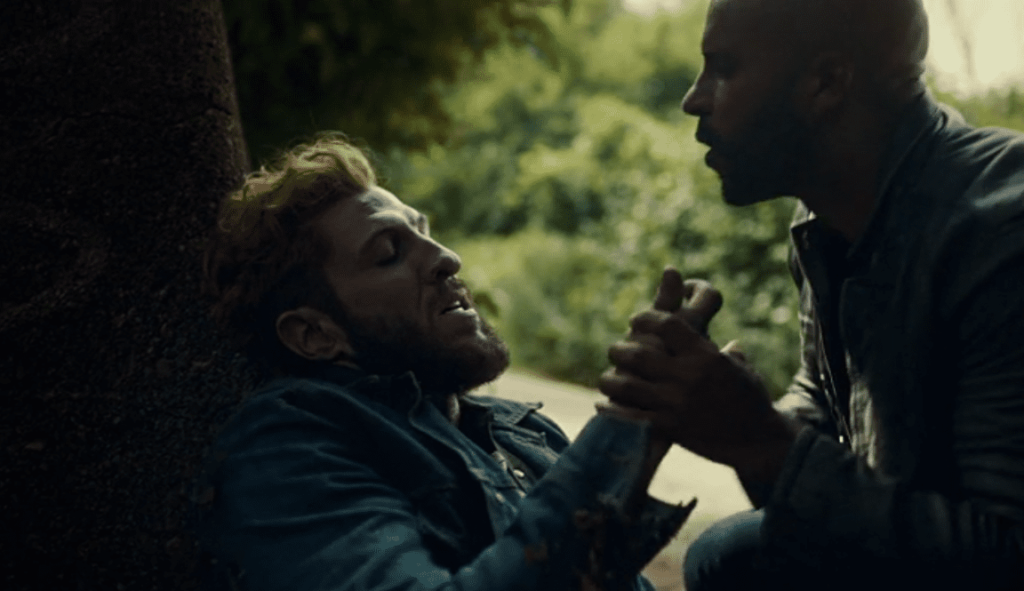 Wednesday and the other old gods are gearing up for war over funeral leftovers. Yggdrasil is growing strong in a greenhouse, and the gods discuss who may be on their side. Shadow pops in to tell Wednesday that Sweeney is in bad shape. Wednesday dismisses the other gods and lets Shadow watch him heal his spear, using a brand of Yggdrasil. Wednesday tells Shadow he must guard his spear the same way he guards him but there will be more tasks ahead.

Meanwhile, in a Motel America in Tennessee, Laura has stopped in for coffee, but Mama-Ji isn’t having it. The two go toe-to-toe for a bit until Mama-Ji shows her true goddess nature. Laura smartly walks back the sass and explains her need for blood to complete the potion she got back in New Orleans. Mama-Ji warns it’s not the potion, but the reason that matters most while also reminding her that she also has the power to destroy. She slips Laura a tip on where Shadow (or possibly Sweeney?) is, and Laura hits the road, hitching a ride. 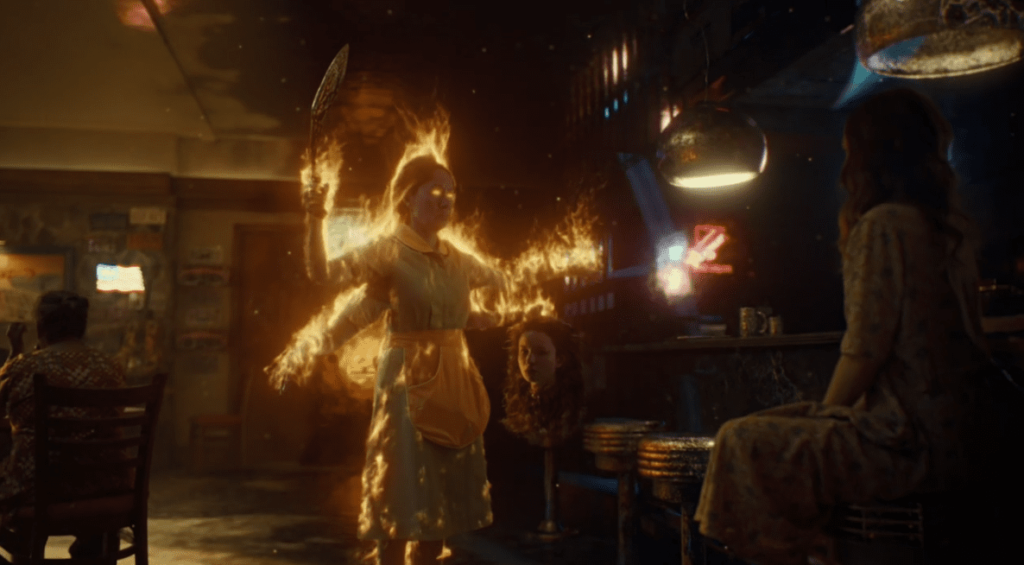 Back in Cairo, Mad Sweeney’s still freaking out, mistaking mourners for banshees. Bilquis has adapted once more, reading the Bible to bewitched partners. The book she gravitates toward is a natural choice: the sensual Song of Solomon. Afterwards, Bilquis and Sweeney chat on his origins, which vary from leprechaun to mad man to golden king. Sweeney seems to think he was cursed by a woman who had the sight. But he can’t remember for sure.

Next, he visits Wednesday and demands their compact end, most likely because he doesn’t want to kill Laura again just to get his coin back. He’s too involved now, after what happened in New Orleans, plus there’s Shadow to think about. Wednesday tells him to do the job but Sweeney resists.

Sweeney decides his best plan of action is to drink. He breaks a beer bottle and the ants appear, taking us back into his memories of going mad after a battle and retreating to the forest to live off of ants. His wife and child appear and try to feed and calm him, but it’s to no avail. He blames the grey monks for his sorrows.

Sliding back into the present, Salim comes out to check on Sweeney. They talk about Salim’s reasons for staying with the Jinn. Sweeney reminds him that all of them owe Wednesday something except for him and that he could leave. He also points out Salim’s mortality and does he really want to give that up to be with an immortal god? Salim is steadfast and says he can’t explain love to someone who’s never felt it.

But Sweeney has felt it and he remembers back to who he was as a king. His wife begs him to change with the world instead of fighting it. He almost agrees until the church bells start ringing. It was then he told the monks to leave, killing one, and a bishop cursed him. After war breaks out, he walks away from it all going mad….or did he?

Startled out of his memories, he roams the house and stops by Shadow’s room. He warns Shadow to keep Laura away from Wednesday but won’t say more. He then reminds Shadow that Wednesday mistreats people and one day it’ll be him and that Shadow will have to hold Wednesday’s vigil if he’s killed. Shadow shakes it off until Sweeney steals his lucky coin and he explains how he did his trick by thinking of the horde. When he makes Shadow’s coin disappear, it puts Shadow on edge. Sweeney promises to give it back if Shadow honors a promise in return: to stay out of the way when Death visits the house. Shadow agrees and gets his coin back.

Next on Sweeney’s list to visit is Mr. Ibis, who is already putting Sweeney’s story down, harkening back to a point Sweeney made earlier:

“A storyteller does not concern himself with the truth. Stories are truer than the truth.”

In Ibis’ version, Sweeney is Lugus, a god-king of the sun, luck, and art. At war, he defeats the one-eyed Balor by putting a spear through his one good eye. Sweeney says he didn’t want to do it, but Ibis corrects him. Balor had heard a prophecy that one of his grandchildren would kill him so he drowns them all. Lugus was the only one to survive. Sweeney makes Ibis stop, remembering it differently again with Wednesday standing in for Balor. He hands off his twenty to Ibis for drinking all the beer and shuffles off. 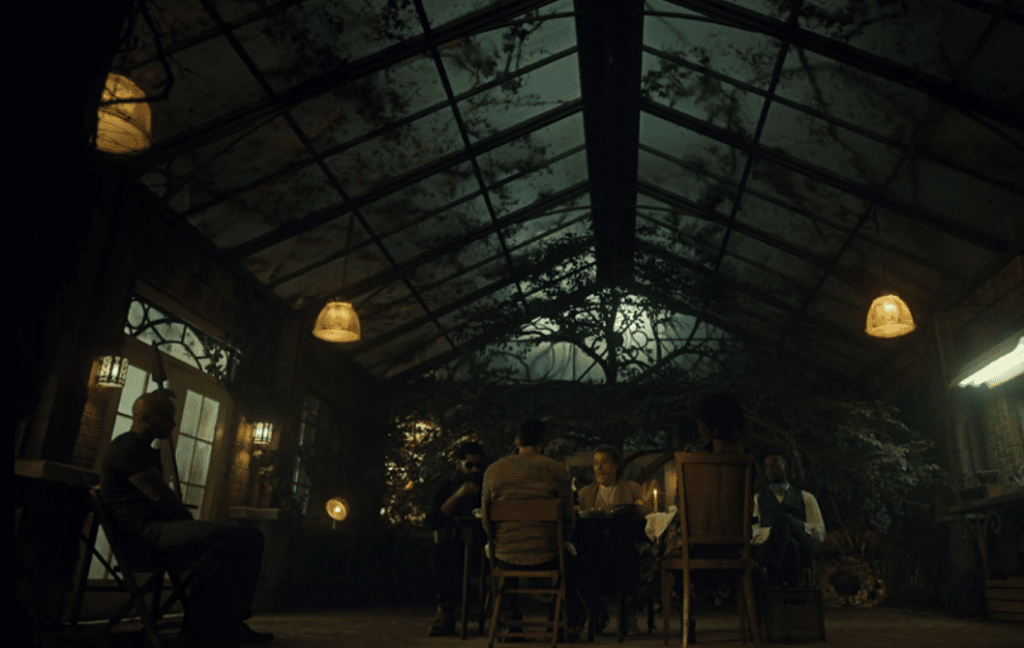 Laura finally makes it to the outskirts of Cairo. It’s dinner time and Wednesday is hosting a last supper of sorts for his fellow gods…all except Sweeney.

Sweeney goes for Wednesday’s spear but Shadow tries to stop him. Sweeney demands the other gods leave the room, and he reminds Shadow that he should leave. The two fight while Wednesday watches. Sweeney finally reveals the truth: he’s the reason Laura died in the first place. It was Wednesday who set the plans in motion. Then he takes it further and reveals they slept together in New Orleans. That finally sets Shadow off and gives Sweeney just enough time to grab the spear and charge toward Wednesday. Shadow swings the spear around, running Sweeney through. Shadow is shell-shocked. Wednesday calls it a waste, saying he could have had a battle, but Sweeney counters that Wednesday was always his battle. In his last moments, he thinks of the horde and makes Wednesday’s spear vanish, a literal and final fuck you.

And so Sweeney’s luck has run its course. But what was it all for? Overall, I think this episode was leaning into the ideas that last week’s episode set up: Wednesday is dangerous and not to be trusted. And what’s faith without a little doubt thrown in to grease the wheels? Oddly, Shadow seems removed from it all, which makes him come off as a bit of a chump, so I’m hoping some of what Sweeney said will stick this time around. But with so many stories being told by the gods, it’s hard to keep straight what’s actually real and where faith again will have to lead the way.

As for Laura, the main question is who is she returning for? Is she looking for Shadow or Sweeney? Does she want a round with Wednesday as well? All paths lead back to Cairo, but the war will have to wait since Wednesday’s spear is now treasure of the sun. As a southerner I also liked the shout-out to Tennessee in the Motel America scene. If all goes to plan, we’ll be seeing Tennessee again in the battle ahead…eventually. 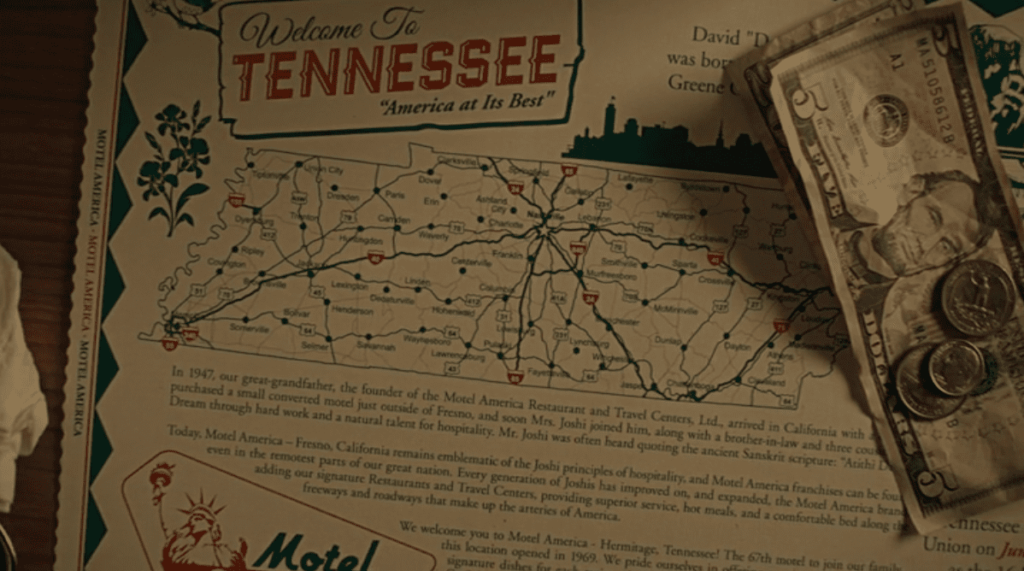