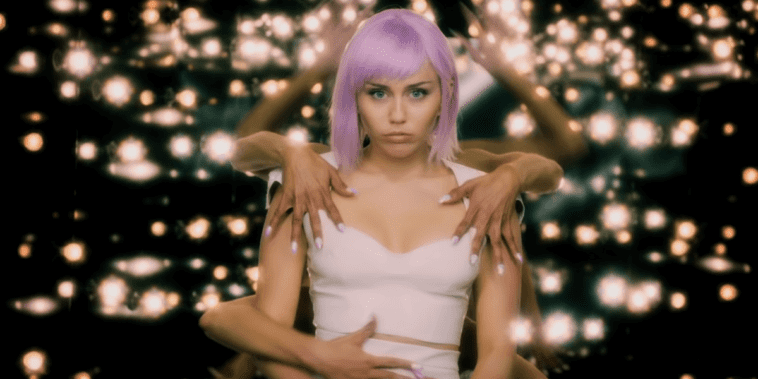 The first trailer for Season 5 of Black Mirror was released about a week and a half ago, revealing a premiere date of June 5, 2019, but little other information. It cut between the three episodes of the upcoming season and was more a series of suggestive images and lines than anything else.

Since then, however, episode specific trailers have been released, and while it is still not clear precisely what each installment will be about, there is not a lot more to work with in terms of speculation.

Rachel, Jack and Ashley Too

When I read that Miley Cyrus was going to be in the upcoming season, I wasn’t exactly excited, but her casting here seems spot on. From what we can tell, Ashley (Cyrus) seems to be some kind of mix of pop singer and self-help guru, which is of course totally plausible given the way things have been going in the real world.

It seems the episode will center around the roll out of “Ashley Too,” which seems to be something along the lines of an Amazon Echo that can also move about, though perhaps the point of the device is more to provide pep talks than to answer search engine questions.

In the context of the Black Mirror, the repeated insistence to “Believe in yourself” takes on a sinister aspect, indeed, and it seems clear to me that this episode will be a spiritual successor to “Fifteen Million Merits,” which saw its protagonists trying to assert themselves as individuals through a TV competition on the model of American Idol, only to find themselves trapped in the system of commodification at the end of the day.

It’s worth noting that we very briefly see Rachel onstage in this trailer. Is Ashley Too supposed to help everyone become a celebrity? Of course, that’s not possible, but it would be in line with the lie of the American Dream: you can have a rags to riches story, but not everyone can “make it.” This is just the structure of capitalism—it depends on the exploitation of the proletariat.

In our technologically infused world, we see this playing out in terms of YouTube stardom and the like. Sure, perhaps any given person could become internet famous and make a bunch of money, but not every person. So much marketing hangs on the conflation of those two very different notions of universality.

It would also seem that Ashley Too depends on the exploitation of Ashley, and it will be interesting to see how the tech works on that front. Black Mirror has already exposed us to “cookies“—digital copies of the consciousness of an individual—on multiple occasions. Is the tech here in line with that notion, perhaps, but with some sustained connection to the flesh and blood Ashley?

I’m excited to see where this episode goes. The only thing that worries me is the bit at the end of the trailer where Ashley Too complains about the cable stuck in her rear. This feels like a bad joke from a children’s movie, so I can only hope it plays better within the context of the episode itself. If it indicates that the device(s)—presumably there is more than one, right?—gain some kind of independent self-awareness, that could be interesting. But I cringed at how that scene played in the trailer, nonetheless.

“Nothing is going on,” Anthony Mackie’s character says to his wife, clearly lying. What exactly is going on, though, is far from clear. We see something that seems to resemble Tinder, and Mackie using what appears to be the same kind of neural implant/interface as we saw in USS Callister.

This leads me to surmise that “what is going on” has to do with a virtual reality environment in some way, and likely involves virtual infidelity. In this regard, the episode may be a spiritual successor to “The Entire History of You,” but from a different angle.

My biggest question is about the title, “Striking Vipers”—it seems like this will likely be key in a way that the trailer doesn’t get to. What is the tech that is disrupting this couple, and how is it doing so? And how does that relate to their apparent desire to have a baby? Or is it maybe that he doesn’t actually want one for a reason that ties into all of this?

My guess is that the Mortal Kombat style scene we saw in the first trailer Netflix released is from this episode, but it is hard to be sure. That would fit, however, if it is going to explore something along the lines of virtual reality gaming as I think it will. I am reminded of the game Justin Theroux’s character plays in Maniac, but I digress.

I am intrigued by the title here, first of all—“Smithereens” implies a number of small, broken pieces of something, as when we say, “he was blown to smithereens.” Yet here, it seems to be the name of an app, and that app seems to have something to do with driving.

Uber, Lyft, Via, and the like, are of course ripe for the Black Mirror treatment. But it seems like there is more to the story here than I can even speculate about.

Andrew Scott’s character is clearly going to rail against the system with a gun and a hostage, calling to mind for me previous episodes, such as “Shut up and Dance” and I suppose “Nosedive” insofar as his problem seems to be with how addicted everyone is to their phones. But what exactly is he upset about? What exactly does the Smithereens app do?

I am the most intrigued about this episode, but that may be because of the three, this trailer seems to give us the least to work with. I have a lot of questions, and those are exciting things.

Perhaps the biggest is how the whole meditation aspect with Topher Grace will factor in. Will there be a running theme in this season relating to the industry of self-help?

Season 5 of Black Mirror is set to hit Netflix on June 5, and you can look for my episode analyses here on 25YL in the days that follow. In the meantime, watch these trailers over and over and let me know what you think, and you can check out the pieces I have written about the first four seasons plus “Bandersnatch” and let me know what you think about those as well.