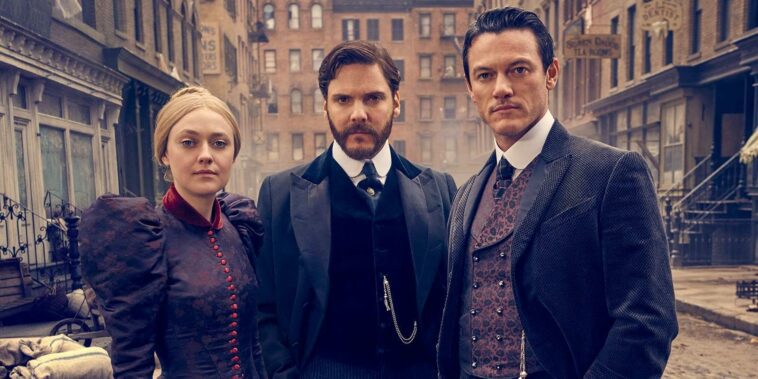 Like many other Alienist fans, I have been waiting for any word on the storyline or casting to come out about the sequel to the hit TNT Suspense show The Alienist. The Angel of Darkness is currently filming in Budapest and unites the leads, Daniel Bruhl as Dr. Laszlo Kreizler, Luke Evans as John Moore and Dakota Fanning as Sara Howard. Also announced joining the cast is Melanie Field, last seen in Paramount Network’s Heathers reboot, and newcomer Rosy McEwen.

In an article that came out today on Deadline, the storyline will follow Sara Howard’s new private detective agency, and she enlists the help of her old friends Kreizler and Moore to help her track down a killer.

Field will portray a protégé of Howard, by the name of Bitsy Sussman. Newcomer McEwen will play a young nurse by the name of Libby Hatch who becomes Howard’s friend. Will these ladies take the place of Marcus and Lucius Isaacson, played by Douglas Smith and Matthew Shear? Or will they just be welcome additions to an already stellar cast?

Also, a new addition as showrunner is Frank Pugliese, former writer/producer of House of Cards.

The Alienist was a critical hit in 2018, garnering six Emmy nominations.  If you missed watching it the first time, you can binge watch it on the TNT app. You can also take a dive into The Alienist and the minds of Kreizler, Moore, and Howard through my eyes.

We will be covering The Angel of Darkness when it premieres, subscribe to 25 Years Later Site to make sure you don’t miss any Alienist updates.

J.C. Hotchkiss is a Office Manager by day and Managing Twin Peaks Editor for 25YL Site the other 16 hours of the day. When she isn’t writing of her love of FBI Agents with a penchant for doughnuts, coffee and pie, she enjoys getting lost in a good book, sipping a damn fine glass of wine among friends, chatting with her "TB's" about Cevans and Fleabag's Hot Priest, and trying to keep up with the latest cartoon craze via her 6 year old. She lives smack in the middle of the Big Apple and Beantown, so for a girl with many different interests and tastes it's the perfect place to be.