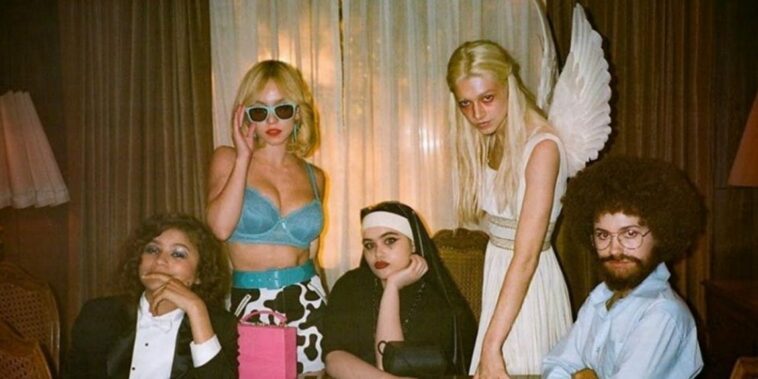 This week’s episode of Euphoria brought us answers to some of the hard questions the show has raised while suspending us with anticipation for how characters will settle their conflicts. Now, we know Nate (Jacob Elordi)’s abhorrent intentions with Jules (Hunter Schafer)’s nude photos, we know more about how Jules and Rue (Zendaya)’s relationship will impact Rue’s sobriety, and we know more about the troubled dynamic that drives Cassie (Sydney Sweeney) and McKay (Algee Smith)’s relationship. Like Episodes 1 and 4, the Halloween party of Episode 6 serves as a shared setting that impels the action of interrelated plots. Similar to how each episode of the show is named after a relevant song title, each character’s Halloween costume in Episode 6 is evocative of a character from a major movie.

Episode 6 opens by giving us insight into McKay’s background and character. His father has trained him to be a stellar football player since early childhood, driving him to excel past his peers to a somewhat unreasonable degree. Scenes of McKay’s father pushing him to practice to the point of vomiting before his regular football training session clues us in to the mania that compels the father’s disproportionate expectations of McKay’s ability to perform. The show also reveals that McKay’s father has explicitly taught him unhealthy coping mechanisms for negative emotions, instructing him to bottle his emotions up and to channel that pent-up energy into his game.

Most essentially, we learn that, as a result of his father’s persistent haranguing, McKay’s overall personal confidence is bound up in his ability to perform well on the field. We know from previous episodes that McKay has sat on the bench for most of the season during his freshman year of college, and that the abrupt transition from being a football star in high school to now being sidelined has hurt his ego. In Episode 6, we learn more about McKay’s thought process about being benched, that he has personally calculated that his chances of fulfilling his and his father’s dreams of making the NFL are next to nothing.

With his primary source of personal validation being undermined, McKay now fulfills his sense of personal confidence through his relationship with Cassie. Being with a girl who he knows that other men find extremely desirable inflates his sense of self-assurance. His association with her visibility assures that he will never be invisible. We are shown that the night before the Halloween party of Episode 6, Cassie joined McKay for a different Halloween party at the college dormitory.

That night, when Cassie and McKay are alone in bed, a group of masked upperclassmen—presumably in some sick, twisted act of hazing—enter the room, rip McKay away from Cassie and out of bed, and proceed to overpower, assault, and humiliate him. When they are gone, we see McKay viscerally bottling in his negative emotions the way his father trained him, and he callously imposes this negation of his personal feelings on Cassie, as well.

Cassie is very proud of her costume: she goes dressed as Alabama Worley from Quentin Tarantino’s True Romance. Concerned that she looks too slutty, McKay completely overlooks her clever reference to a classic film and insists that she changes into a football jersey. McKay’s preoccupation with Cassie’s image in relationship to his identity, for him, supersedes any personal expression on her part. During the Halloween party, Cassie at first thinks she has found a friend or potential partner in Daniel (Keean Johnson) because he recognizes the character of her costume and seems to validate her. She is cruelly disillusioned, however, when Daniel disparages her personality after she refuses to have sex with him. In future episodes, we will find out how Cassie and McKay come to negotiate their individual senses of self-worth based on internal validation, and if their relationship can grow from a place of mutual love and trust.

Other major storylines in the show also revolve around the Halloween party in Episode 6, including Kat’s sense of independent sexual voracity and Rue and Jules’ changing friendship. We see Kat and Ethan (Austin Abrams) reconnect. Kat continues to rebuff his attempts at making an emotional connection with her, plainly stating that she is only interested in sex and that she is not interested in a relationship. Each time that Kat attempts to put Ethan off, he tries to meet her where she’s at.

When they are alone, Kat guesses rightly that Ethan is a virgin. By this point, Kat has expanded her camgirl enterprise of humiliating masochistic men and is so used to relating to men from a psychologically belittling stance. In truth, Kat protects herself from feelings of emotional vulnerability by lashing out at Ethan. She laughs at him, declaring that she doesn’t want to have sex with a virgin. Ethan bravely averts her brisk dismissal by offering something that she hasn’t experienced, despite her posturing as a sexual deviant: female oral pleasure. We will see if Ethan will continue to pursue Kat despite her pushing him away, or if she will lay off her hard stance toward emotional intimacy.

Finally, Episode 6 gave us more insight into how Rue and Jules’ increasingly complicated friendship will impact Rue’s commitment to sobriety. On the way to the Halloween party, Rue immediately notices that something is off in Jules’ standoffishness toward her. Things take an even nastier turn as Jules proceeds to get absolutely shitfaced at the party, knowingly eschewing her informal responsibility to “chaperone” Rue. Rue is visibly perturbed by Jules’ disregard for her, and she begins to wonder if her sponsor Ali (Colman Domingo) was right when, in a previous episode, he told her that high school relationships are temporary.

The very good news from this episode, however, is that Rue remains committed to her sobriety even without the solace of Jules’ attention. Rue has matured enough to recognize that her addiction does not permit her to drink for fun the way her friends do, and she abides by the clear boundaries that she has defined for herself. Her commitment to sobriety frees her up to interact with people around her at the party. In Episode 6, we see Rue reconciling with Fezco (Angus Cloud) after reviling him for not giving her drugs when she was in withdrawal; we see Rue looking out for her younger sister Gia (Storm Reid) at the party; and, we see her taking solace in her renewed friendship with Lexi (Maude Apatow) when the going gets rough with Jules.

On a darker note, in Episode 6 we learn how Nate has been plotting to use the sensitive information that he got from Jules through deceit and manipulation. When Nate was wooing Jules under a false name, ShyGuy118 or “Tyler,” he obtained nude photos from her. In Episode 4, when Nate revealed his true identity to Jules, he threatened her with arrest and imprisonment for distributing child pornography. Now, Nate has contrived a truly sociopathic scheme to evade the charges of assault and battery levied against him by Maddy’s parents in Episode 5 for the strangulation marks he left around Maddy’s neck at the end of Episode 4.

Nate blackmails the real Tyler (Lukas Gage)—the guy who had sex with Maddy at McKay’s pool party in Episode 1 and who Nate beat to a pulp for it in Episode 2—into confessing to Maddy’s assault. Nate convinces him that if he does not confess to the crime, then Maddy will report him for raping her. Tyler did not forcibly rape Maddy, but it was technically statutory rape. And, we can assume that Maddy is complicit in Nate’s scheme because we know that they have been meeting in hotels regularly since Nate’s arrest. To top everything off, Nate also blackmails Jules into reporting as a witness to Tyler’s fabricated assault on Maddy.

These tensions culminate in the final scene of Episode 6, when Nate and Maddy enter the Halloween party together as a couple. We can assume that this is one of the first times that Maddy and Nate are seen publicly as a couple since Nate’s arrest, and they are proud that Nate’s public image has been restored since Tyler was blackmailed into confessing to Nate’s assault on Maddy. We see Nate noticing Jules over Maddy’s shoulder, and we see Jules coldly glaring back at him. We also see Rue noticing this exchange, and it becomes clear that Rue has discovered that Nate figures prominently into Jules’ obscure behavior.

In Episode 7, we can expect Rue to try to get information about Nate from Jules. I foresee Rue attempting to protect Jules from Nate in a sisterly way, the way that Rue is also driven to protect her sister Gia from nasty teenage boys and from her own addiction.

Rebecca is the Executive Editor of Horror Obsessive at 25YL Media. She is an academic librarian with a background in literary studies, comparative literature, and film studies.