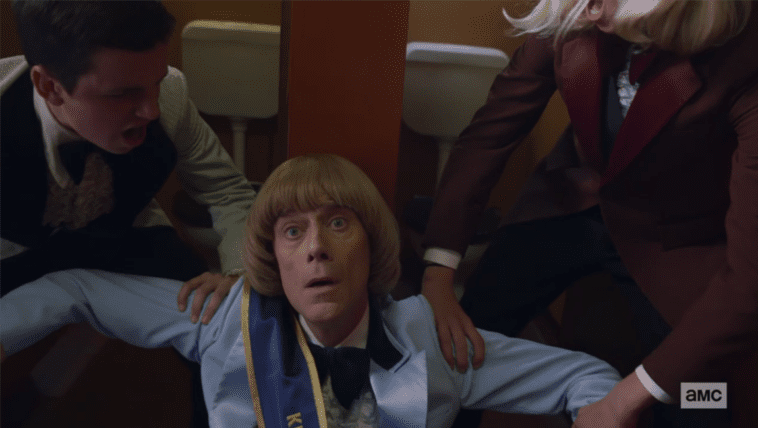 We all know the drill, so say it with me: “this week offers another alright Preacher episode. It has its moments, but it’s also not particularly great. There are some alright goofs, a decent shot or two, and some good dialogue, but we’re still stuck on the whole ‘plot’ thing.” I really wish I could change it up more. It was easy to write about “The Lost Apostle” because that was a good episode. It would be easy to write about a bad episode, diving into the pitfalls and issues. Instead, we get stuck with these middle-of-the-road situations where I struggle to feel much about the episode and thus deliver a luke-warm take that ultimately boils down to “meh.”

We’ll start with the titular Preacher, this time because his story this episode is fairly short and fairly boring. Jesse is still in Hell, Fiore is still trying to torture him into becoming God, and Jesse is still refusing, positive this was some test from God. And just as the angels (demons?) are about to forcibly plant Jesse on God’s throne, God returns Jesse to life.

Whether Jesse actually made contact with that throne or not is yet to be seen, but clearly the big man doesn’t want him on that chair. God explains that Jesse was right, and it was all a test. Unfortunately, though, Jesse has failed for even a thought can be a sin. Because of Jesse’s failure, the world must burn and be reborn anew. But this is God talking and, as we all know, God is an asshole. Who knows how much of what he says is true.

He also bites out one of Jesse’s eyes which…okay.

Cassidy and Tulip spend their time this episode with Humperdoo, learning why he has been chosen as the new messiah and also strapping him with explosives. Mind, learning to love Humperdoo wasn’t intentional, he’s just that charming. The explosives were intentional, though never had a chance to go off. The Grail swept in, helmed by Herr Starr, and stole Humperdoo away from the new parents as Tulip watched, unable to bring herself to detonate the Christ Child.

And that leaves us with the Grail and Herr Starr. There’s not a lot happening with the Grail other than the reclamation of Humperdoo, but it’s a big episode for Starr. We start with the revelation of his childhood trauma and the loss of his eye before moving onto more contemporary injuries. He’s gotten a new penis replacement in the form of a faucet, but it cost him a leg. A suicide attempt cost him his nipples and any remaining dignity. But God can occasionally be kind, and Starr has finally found himself in God’s graces. A bit of a helping hand a short trip later, both Humperdoo and Starr’s beauty has been returned.

Starr has a real story arc this episode, bucking the recent trend of having him just wallow in self-pity. We saw him at both his highest and lowest points. We saw more emotion from him this episode than we’ve seen in the rest of the season. We open with the trauma from his childhood, a moment that genuinely had me laughing aloud. From there we learn of his new faucet-penis, the loss of his leg, failed suicide attempt and subsequent loss of nipples, and finally, a way to earn all his beauty back. It was satisfying to watch him struggle through the peaks and valleys of his life, finding new ways to grow and new ways to fail. His back story showed us a more sensitive side and gave us a reason to care about the plight of our beloved psychopath. Suddenly, Starr had depth again.

On the flip side, there’s Jesse. Our main character who has refused to grow all season and has felt shallower and shallower with each passing episode. Hopefully, with God’s rejection, he’ll start to grow, but up to this point, he has been single-mindedly chasing a dream that was clearly not real. His devotion had proven time and time again to be misplaced, and yet he persisted. His character has grown stale and boring and his plotline has become so predictable that you hardly even need to watch the episode to know where it will end.

The strangest part about “Fear of the Lord” is how hollow it all felt. I’ve been harping on Season 4 for not moving the plot along for a while now, but here they went and did it, yet I’m still complaining. We had actual development, there were no last-minute twists that just add nonsense, nothing. It was, by all metrics, a success. I think my gripes come not from the plot, but from the lack of conclusions and the willingness of the show to lie to us.

Preacher is ending in two episodes, and yet I still don’t fully believe anything that has happened this season. Is God’s plan truly the apocalypse? Hard to say. This could just be another one of those tests he’s so fond of. Is Humperdoo the true messiah? It’s seeming more likely, but that whole plotline feels immensely rushed. And Genesis is just hanging out there, a loose end that I feel like the writers are just hoping we’ll forget about. Character arcs are being left incomplete or, at the very best, rushed through to an unsatisfying end. It’s a bizarre situation Preacher has found itself in, and I don’t think it’s going to get any better before it finally ends.

Also, can we please stop with vomiting scenes in everything? I don’t think anyone has found them funny in years and honestly, they’re just unpleasant. Thanks.