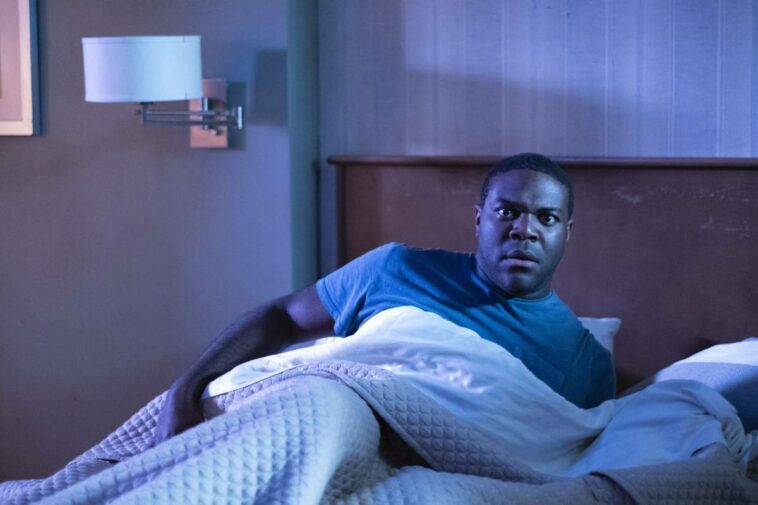 This week’s Room 104, “Drywall Guys” (S3E5) is probably the most light-hearted episode so far in this season. It was written by Mark Duplass and directed by Shira Piven who has previously directed the wonderfully quirky, yet absorbing Welcome to Me, a film which relied heavily (and successfully) on the central performance of Kristen Wiig. Duplass has a versatile writing style and you can tell from a quick look at his credit list that this man has at least 300 ideas a day. Room 104 is the perfect venue to unleash some of those ideas that would otherwise probably languish in a notebook somewhere. There are only so many films one man can make, even if you do have your own production company.

The key elements of Duplass’s writing—regardless of genre—are mood and dialogue, and he has a tendency to zero in on those things, which is why he is such an effective budget filmmaker. Second to that, of course, is picking actors to work with that can successfully inhabit the roles he creates, or riff off the scripts in order to do so. He is a firm believer in allowing actors to improvise if it helps to hit on a certain element or emotion.

Sam Richardson is the perfect choice in the role of Greg, having previous form playing the lone good guy as anxious staffer Richard Splett in Veep, while Steve Little (Stevie in Eastbound & Down) seems to be genuinely reveling playing the role of the hapless Randy.

“This is the story of a very nice boy named Greg, and a very strange boy named Randy”

“Drywall Guys” is somewhat less ambitious in scope than most of the episodes this season, and at just over 20 minutes, the shortest so far. It is presented as a parable, utilizing a narrative voiceover that has the plummy, slightly disapproving tone that made me think of Vincent Price almost immediately. Despite it’s lighter nature and it’s humour, this episode retains the Room 104 focus on character.

Greg (Sam Richardson) and Randy (Steve Little) are staying in the motel while on a contracting gig. Nobody else in the crew will share a room with Randy, due in the main to his unfortunate habit of sleepwalking, but it also gradually becomes apparent that he just isn’t that great a person to share a room with—always forgetting to buy meat for the sandwiches, and incapable of organising himself. Greg, portrayed as “a nice boy” in the fable compensates for Randy’s shortcomings by making the sandwiches, drinks, making sure Randy gets to work on time, and trying to put up with Randy’s nocturnal behaviour.

Because he’s a nice boy, Greg dismisses Randy’s apologies for his sleepwalking and offers to help find a way to try to fix it, despite Randy’s doubts because he’s been doing it “forever”. Randy says the job will only last another two weeks and then Greg will be rid of him forever. This is obviously a pitiable attempt to fish for emotional support. He follows this up by exclaiming that he forgot to get the meat for his sandwiches when he sees Greg packing his own. Greg, the nice boy, says he can make him another one, but you can see the annoyance behind the smile. Randy’s haplessness is starting to wear on him, and you suspect that Randy has been getting away with this kind of thing for a very long time, never bothering to make an effort because he can always rely on the kindness of others.

Greg can ignore these minor annoyances. It’s a temporary job, so he’s willing to put up with it in the interest of politeness and because he’s just a damned nice guy. However, the sleepwalking is taking its toll on his sleep and he wants to fix it. Randy, somehow managing to be both helpless and annoying at the same time, thanks Greg for rooming with him and being his friend. Greg, visibly wincing inside at being considered Randy’s friend, tries to brush it off. He denies that it’s true that nobody would want to room with Randy. The narrator interjects: “It was 100% true.”

There’s a childlike whininess to Randy that makes him extremely unlikable even though his behaviour doesn’t seem too bad. His forgetfulness and tardiness would probably be more acceptable coming from a more obviously obnoxious yet fun person. It’d be brushed off with an “Awwww, that’s just Randy. He’s alright”. Randy, however, has an air of the spoiled kid at school who uses emotional blackmail to get his way, and the other kids just instinctively steer clear of, even though they aren’t quite sure why. As the narrator says: “Greg knew in his heart that he could never truly be friends with Randy, but since he was a nice boy…” followed with a foreboding, “But even nice boys have their limits.”

Woken once again by Randy in the night, despite being a nice boy, Greg’s patience is running out and he’s having a hard time following his mother’s advice to always be kinder than necessary because you never know what someone is going through. Despite knowing you’re not supposed to wake a sleepwalker, Greg tries poking Randy with a tape measure, which provokes Randy to scream, leap on Greg and punch him in the face.

The incessant apologies come in the morning, but these seem to bother Greg less than Randy’s claim that he is his best friend. When he asks if he can do something to make up for it, Greg, running late, says he could make the sandwiches. Randy whines that it wasn’t what he meant and that he’s not a little kid—although he sounds almost exactly like a little kid—and Greg, finally losing his patience, snaps and yells that he is acting like one. Randy’s face at this outburst is such a picture of wounded helplessness that Greg feels bad for lashing out, and adopting the tone of a parent trying to soothe a distraught child tells Randy it would be really helpful if he made the sandwiches so they aren’t late to work.

Randy has of course forgotten to buy the meat again, and amidst promises to buy the next two rounds, continues with his self-pitying rambling diatribe, while the narrator explains that Greg can’t do it for another night. What he really wants to do is tell Randy that he can’t be his roommate anymore, but he’s too nice, so instead comes up with another idea, to “tootsie roll” Randy in his sheets so he can’t get out. As he tells Randy that his dad used to tuck him in like this at night, Randy has a wistful look on his face, and it is clear that this is not something that ever happened to him, and we begin to get an inkling that there may be a good reason that he hasn’t developed emotionally, and displays somewhat childlike behaviours. “That must be why you’re so nice,” he says, “you’re the nicest person I’ve ever met.”

As Randy enters the room at night we realise that the plan has failed. What’s more, still sleepwalking, he puts a small trash bag down on the table and wanders off back to bed. Greg waking after an undisturbed sleep for once is happy until he spots Randy, asleep, covered in bloodstains and scratches. They’re bemused as to what happened until they spot the bag on the table, which on investigation turns out to contain a severed foot. Greg vomits on the spot, but Randy, peering into the bag looks only mildly confused, but mostly curious. Stroking the skin he proclaims it to be a female foot, proffering it to Greg to display the painted toenails. This is definitely not the reaction of any normal person and the first sign that there may actually be something about Randy that goes beyond a simple lack of emotional development.

As Greg starts to pack, Randy pleads with him to stay, that he needs to help, bewildered that his “best friend” would abandon him. Greg gets upset, tells him some home truths, unloading two weeks worth of repressed annoyance, his niceness temporarily overridden by the fact that his roommate may very well have cut someone’s foot off. Having vented his frustration though he quickly recovers, and as Randy makes a final childlike plea for help, his own childhood programming kicks in: to be a nice boy and not to walk away from people in need.

Checking the news for any obvious word of someone missing a foot, Randy states that he is a good person, and wants Greg to agree, that he knows him well enough to state that. Greg retorts by telling Randy that he is essentially incapable of life as an adult, and is about to say something probably even more hurtful when he pauses, wrestling internally with his lifelong moral code.

“Greg wanted to be a nice boy to Randy, but what he really wanted to do was to beat the ever-loving shit out of him…”

Instead, Greg gets up and starts to saw a hole in the drywall to hide the foot in the cavity, and they work peacefully together making the wall look as good as new. Randy pledges himself to Greg, that he’ll always be available for anything he needs, anytime, and overwhelmed with the belief and support he feels Greg has shown, hugs him. Greg simply stands there letting himself be hugged, clearly not caring about Randy at all or his display of emotion. As he lies awake that night, he is wracked with doubt over how he has lived his life, and wonders whether the code of being a “nice boy” is too simple. As his experience with Randy has shown him, the toll of always being nice to others and disregarding his own feelings may not always be the best route.

“Maybe there was such a thing as being…too nice”

Randy is the one more obviously trapped in patterns from his childhood, never having really grown up to take responsibility for himself, or understanding how to make friends or to keep friends, but as the story unfolds we begin to see how Greg is just as trapped in similar patterns. The role of being a nice boy whilst maybe a suitable instruction to a child to keep them out of trouble is far too simplistic for an adult to navigate the world, and as a result, Greg has probably neglected his own desires and endured a lot from people in the pursuit of always being nice.

“Drywall Guys” benefits a lot from its framing as a parable, and the message isn’t obscured too much or hidden behind layers of complexity, but front and centre, and delivered with a lightness of touch and a lot of humour. Sometimes the lighter, humorous episodes of Room 104 don’t quite achieve the levels of quality for me as the more serious or innovative ones, but this one definitely hits the mark, does so in a mere 20 minutes of your time, and may even have you questioning your own habits and behaviours that you’ve acted out your entire adult life.