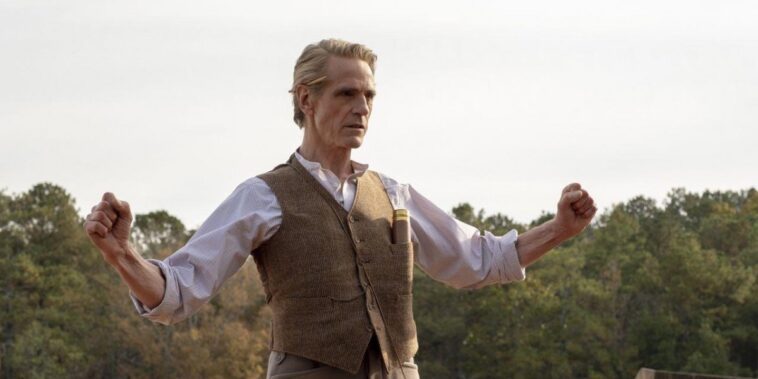 Welcome back to our weekly analysis of HBO’s wonderful Watchmen series! This week I’ll be discussing Watchmen S1E4: “If You Don’t Like My Story, Write Your Own.”

I didn’t think that Egg Withdrawal was a thing, but Watchmen has taught me that it is indeed. Damon Lindelof has been featuring eggs prominently so far in the show, but the previous episode only mentioned eggs in passing via the classic “You can’t make an omelette” idiom. Luckily, I got my fix and then some with the opening scene of this episode, which was not only introduced with a cracking shell and the yolk-dripping Watchmen logo but fully featured a plethora of those glorious eggs.

The First Wonder of the New World

I’m pretty sure I don’t trust Lady Trieu. Her company bought Veidt’s, and she most definitely knows more than she is letting on. It seems that most of the main characters in the show fill similar roles to the characters in the graphic novel. Trieu is something of the new Ozymandias. At the opening of the episode, she insists on taking the Clarks’ farm in exchange for giving them a child that she created. Almost like clockwork, as soon as the deal has been inked, a comet crashes to Earth, and Trieu says, “That…is mine.” What’s that comet? She was almost definitely anticipating its arrival considering her urgency in getting the couple to sign the farm over. In her conversation with Angela in the present time, she almost comes across as a Bond villain, seemingly aware of everything.

And what’s this “First Wonder of the New World” business? Either she’s in the know about something cataclysmic, or she’s following in the footsteps of the “new world” that Veidt created when he dropped that squid in the graphic novel. She has a Goldfinger-esque statue of Veidt in her office, which is either reverential or a power play. It’s even possible that she is the one that trapped Veidt in his prison. The clone parallel would work since her daughter is possibly a clone of Trieu herself. 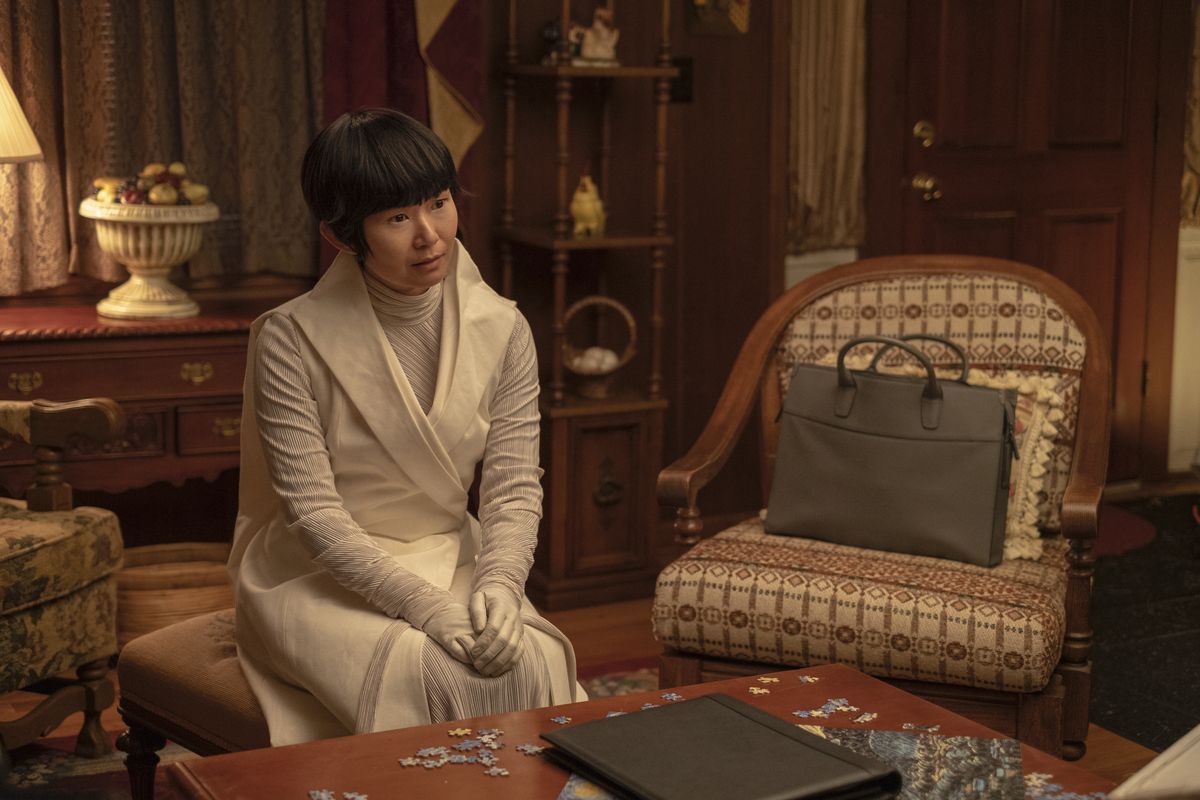 Lube Man! Everyone’s talking about him. No one can get enough of him. We need answers. Who is Lube Man? What does he want? And, most importantly, how did he attain that absolutely flawless form when sliding into the sewer? This spectacularly random scene is one of the weirdest mysteries in Watchmen so far, and I really don’t have much to say on it except that I am very curious to see why Lube Man was seemingly following Angela, and why he fled as soon as she saw him. I’m guessing he has something to do with Trieu, and she’s keeping tabs on Angela. But what’s with the costume?

I guess we can add “Jeremy Irons finding fetuses in a crab trap and tossing them back into the lake” to the “Only on HBO” list.

We finally get to learn (and many of you guessed correctly) that the candles on Veidt’s birthday cake and the “anniversary” his servants celebrate are referencing how long he’s been in this place. Indeed, he is trapped here, and he is hell-bent on getting out. It’s also important to note that we’ve seen four years of his confinement here, while that time certainly has not passed in the main storyline. That means that either he’s in a different time, or time moves differently where he is.

While Watchmen is notably on point (and often on the nose) with its selections of music, I was particularly struck with the decision to feature Beethoven’s “Symphony No. 7 in A Major” for the sequence in which Veidt “raises” the adult clones of Mr. Phillips and Ms. Crookshanks. The piece is one of Beethoven’s most famous and is notable for how its rhythm and tempo resemble a waltz in some sections and a funeral march in others. The piece kicks in shortly before the reveal of Veidt’s dining room, filled with the slaughtered corpses of Phillips and Crookshanks, and draws a thematic parallel to the short life/death/rebirth cycle of his servants.

I started thinking about Phillips and Crookshanks and had a horrific period of empathy, imagining myself as one of them. You start out as a baby at the bottom of the lake, and then the guy who voiced Scar in The Lion King scoops you out of the lake in a crab trap. He carelessly flings a couple of your brethren back into the lake, but for some reason he chooses you. He loads you into a large machine with another of your copies, which begins to spin and heat up with flashing lights. You’re a baby strapped inside a giant machine that spins and flashes, so you are understandably distressed. You begin to cry and scream, but Jeremy Irons is spinning some dank reggae music and eating cake to drown you out. You fall unconscious and awaken as a full-grown adult. You are mute. He tells you you’re his servant and has you start loading corpses that look exactly like you into a catapult. It’s not an ideal situation.

The ending of Watchmen S1E4 really brings some interesting things together. Firstly, it seems to confirm Laurie’s conclusion that one of Lady Trieu’s airships intercepted Angela’s car (with Will inside). Will is with Lady Trieu at her fortress, but what the hell are they planning?

This is probably the most interesting part of this episode: Will says that Angela will never forgive him for betraying her family and in three days she will learn everything. Then he starts saying “Tick-tock.” We started with the Kavalry saying it, then Judd in the pilot, and now Will. So what is the “tick-tock” referring to? Is this, like the Rorschach masks, something the Kavalry has repurposed for their race war? Are Will and the Kavalry referring to the same thing when they say it? Either way, Will seems troubled by what he’s done to his granddaughter but affirms that he is “all in.” Whatever he’s doing, he’s in cahoots with Trieu and is very devoted to whatever that cause is—enough to reject his family (as Angela is likewise doing by discarding her family tree). 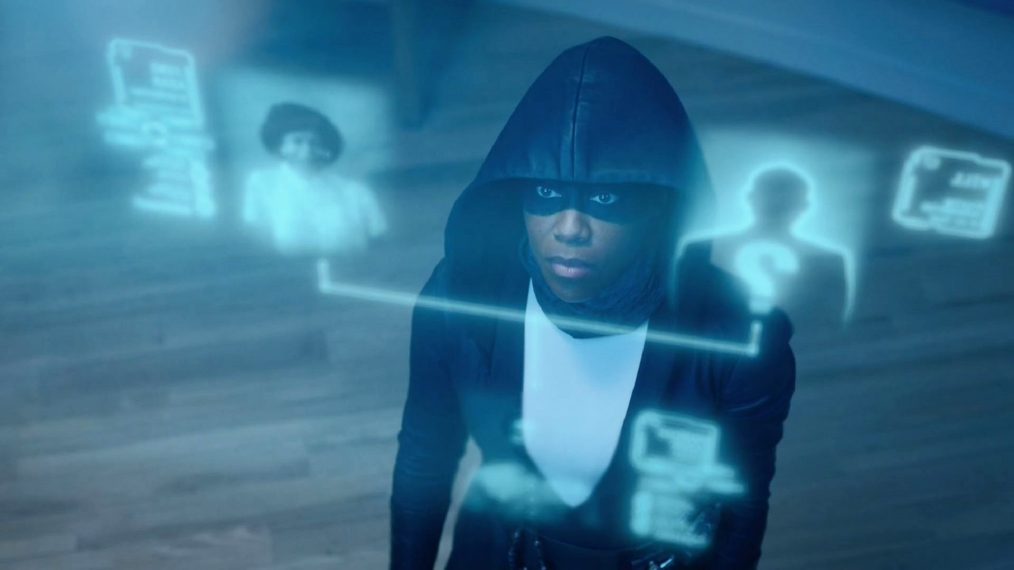 I maintain that the discovery of the Klan garb (which Looking Glass refers to as “old school” when he examines it) is far too easy of a conclusion on Judd’s character. His death was similar to that of Comedian in the graphic novel, but the novel was very clear on the fact that Comedian was a monster, and Judd was portrayed as the polar opposite.

If anyone can tell me the fastest way to inject the excellent Trent Reznor/Atticus Ross score directly into my veins, please hit me up.

Whoever came up with the shot that transitioned from Veidt’s spyglass of the clouds into a full moon deserves a handshake and a beer. That was one of the cleanest and cleverest transitions I’ve seen in years.

The title “If You Don’t Like My Story, Write Your Own” makes partial sense as a reference to Angela rejecting her family tree and Will’s entrance into her life. I also think it’s Lindelof delivering a middle finger to the vocal opponents to his Watchmen continuation. “You don’t like my adaptation? Why don’t you try to do it better?”

I love how Petey’s main purpose is to fill in backstory for viewers who didn’t read the graphic novel.

I am absolutely loving HBO’s Watchmen, more so than I had ever anticipated, and every time an episode ends, I feel a sense of longing to see the next chapter. That’s great writing and great television.