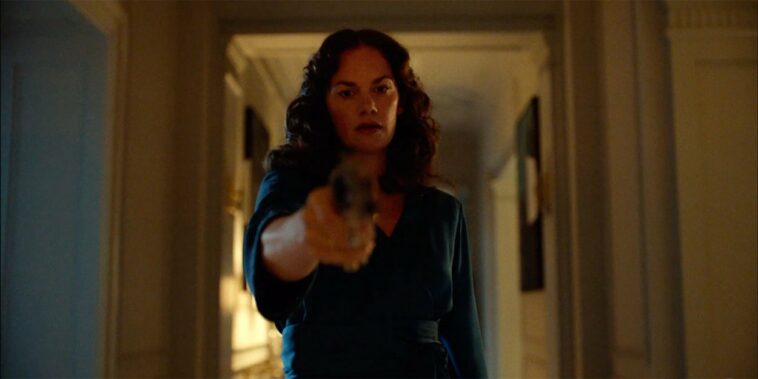 You know how, when you watch the original Star Trek films, the even-numbered ones are amazing while the odd-numbered ones are, well, not so much? I’m truly hoping that this isn’t the case with the rest of His Dark Materials. Three episodes aren’t enough to set a trend, of course, but that even/odd thing occurred to me a lot as I was watching S1E3 (“The Spies”). Take that as you will.

At the end of last week’s episode, Lyra had just run away from Mrs. Coulter, planning to find her own way North. Her plans were interrupted, however, when she was grabbed from behind and stolen off the street. “The Spies” comes back right where the previous episode left off, with Lyra in the back of a van, tangled up in a net.

Fortunately for her, though she was initially abducted by the Gobblers—the shadowy society behind the kidnapping of children everywhere—she’s actually fallen into the hands of the good guys, the Gyptians. These are the people whose children have fallen prey to the Gobblers (including Lyra’s kidnapped friend Roger), and they rescue Lyra from the van. You’d think she would be happier to see a familiar face, but the sight of Tony Costa makes her look more suspicious than anything else.

I know I’ve mentioned the title sequence in previous recaps, but really, every time I watch it I am struck by how stunning HBO can make these things when they want to. Westworld lost me after Season 1, but man, I could watch that opening sequence with the CGI horse forever. Same thing here—though I’m hoping to stick with the whole series, I could happily just watch that opening sequence for an hour every week. And the score for His Dark Materials? Forget about it. Just gorgeous. 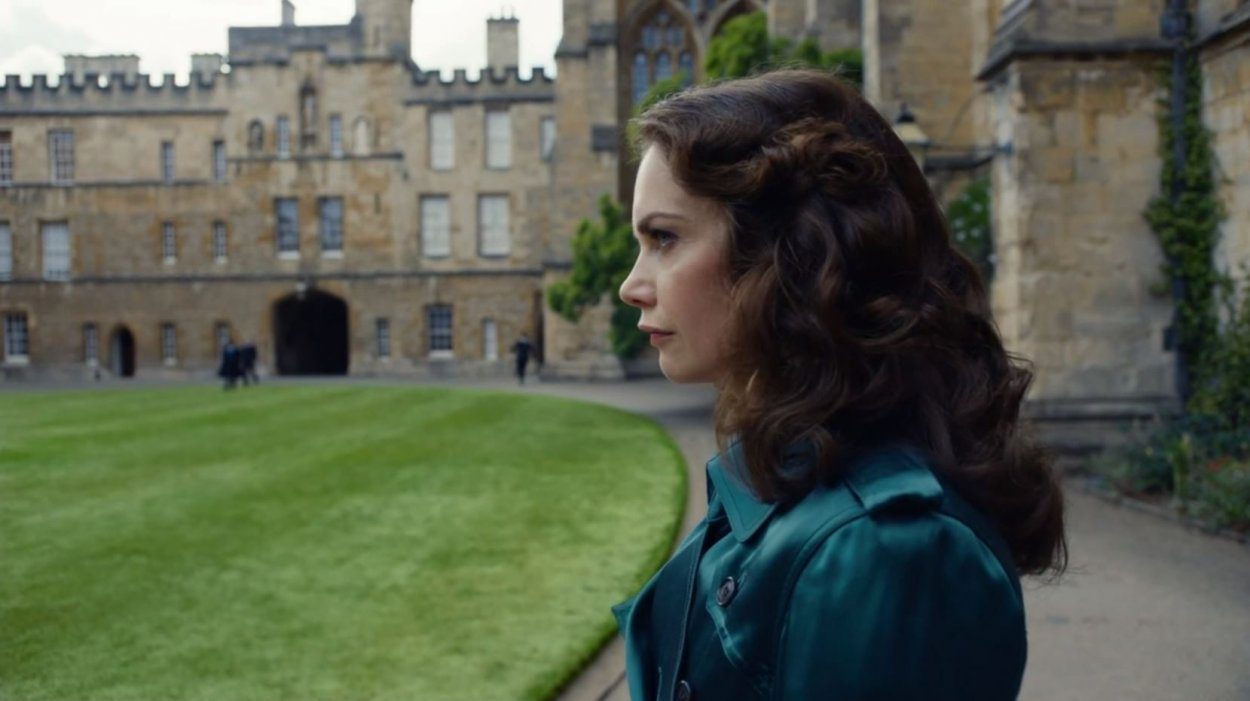 While Lyra is getting settled among the Gyptians, Mrs. Coulter has brought her Magisterium police squad to raid Jordan College. She gets her particular breed of menace up in the face of the Master of the College, despite his protests of scholastic sanctuary. It’s a short scene, but it is telling, not just about the story but about the world. The Master slumps tiredly in a chair, while Mrs. Coulter tears pages out of books and scorns the idea that original thinking should be protected: “Scholastic sanctuary is just another way of protecting bloated privilege. Tired old men talking in a tired old way about tired old things. And you, Master, you have been abusing your privilege.” I had been under the impression that Mrs. Coulter had guessed what Lyra had been keeping in her purse in S1E2, but when the Master confirms that Lyra is in possession of an alethiometer, Mrs. Coulter seems surprised and is now even more keen to find the girl. Apparently only the Magisterium is allowed to have alethiometers.

Lyra is taken to the Gyptian encampment (it’s a bunch of houseboats, all moored together), and Ma Costa is happy to see her. She teaches Lyra some fun Gyptian kitchen special effects and tells Lyra that she can be anything she wants to be. This is certainly a far cry from Mrs. “Let Me Mold You” Coulter, but Lyra is wary of whom to trust. Last week, I speculated that (though it isn’t in the book) series-Lyra seems neurodiverse in some way. I don’t pretend to know enough to call it spectrum or otherwise, but it really feels increasingly that neurotypical she is not. Cool. 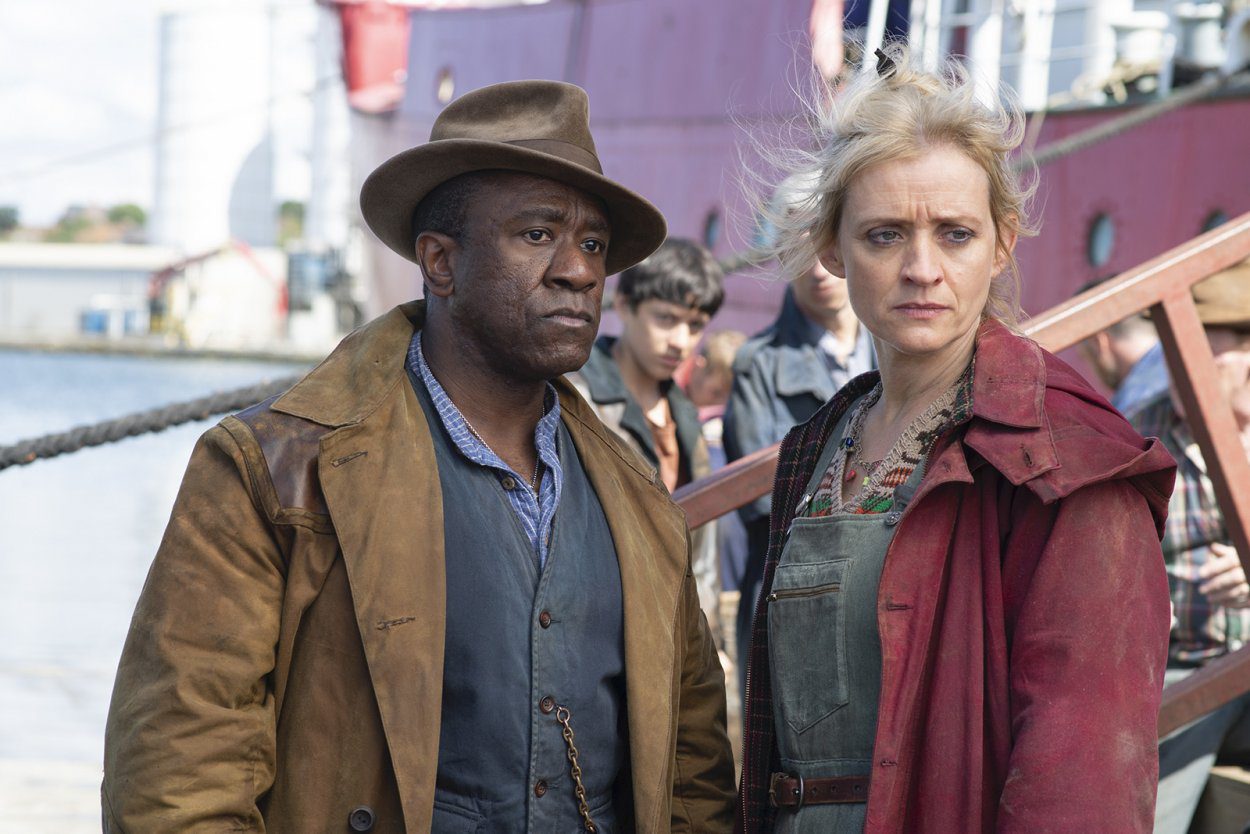 Everyone talks more about daemons. So far, what every episode has had in common has been some point where different characters talk to each other about the nature of daemons. Lyra sits on the deck with Farder Corram (which is weird, since later on he is very insistent that she stay out of sight, below decks), and talks about how she doesn’t want her daemon, Pan, to ever settle. We learn that it is strange that Mrs. Coulter’s daemon (henceforth referred to as CGM—Creepy Golden Monkey) is a monkey, but they don’t say why. It bears mentioning that, while the end product of the daemons on the series is CGI, they used puppets on set for the actors to relate to. CGM doesn’t speak—it’s the only daemon that doesn’t—but the puppeteer is Brian Fisher, who also did the puppet work for Pikachu in the recent Pokémon movie. I’ll never look at Pikachu the same way again.

The Magisterium cops come to the Gyptian encampment looking for Lyra, but they are prepared for this and hide her in a smuggler’s compartment that would have made Han Solo proud. Apparently the Gyptians are accustomed to being harassed by the Magisterium. Their search proves fruitless, and I have to question the noses of the dogs they bring with them who fail to sniff Lyra out. Upon hearing this, Mrs. Coulter has a quiet-yet-scary hissy-fit, in which she and CGM trash her bedroom.

We’re beginning to see even further into the land of “Mrs. Coulter has gone to the zoo.” When she first met Lyra, they had this whole discussion about heights and how they made Mrs. Coulter leery. Now, however, we get to watch her treat the railing of her balcony like a tightrope, walking precariously along it, apparently preparing to do what we later find out is magic that is forbidden, even for her. She sends out a pair of Spy-flies, which will hunt down Lyra and transmit her whereabouts back to Mrs. Coulter. 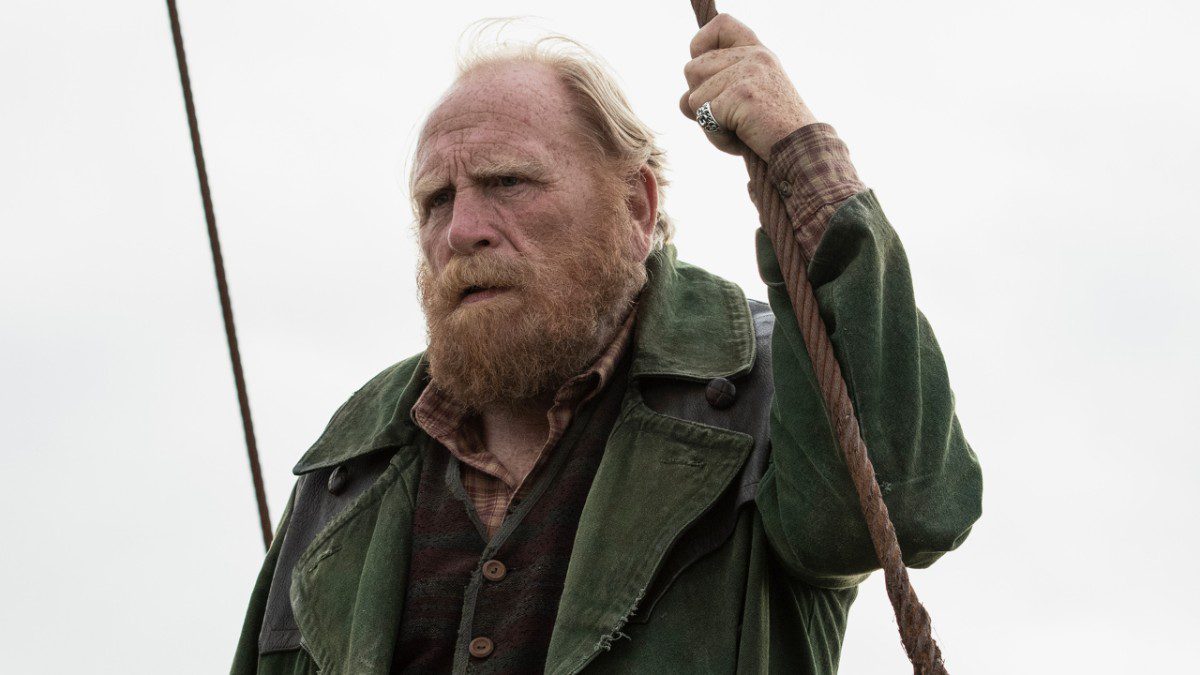 Meanwhile, the Gyptians have gathered for a meeting to discuss what to do about the missing children. John Faa is doing his best St Crispin’s Day-type speech to rouse everyone up. I was very excited to see American Horror Story: Freakshow’s Mat Fraser in there, as one of the Gyptian elders. Lyra chimes in with information about the plans she had seen in Mrs. Coulter’s flat, and it’s a terribly “I will take the ring to Mordor” kind of moment. Tony Costa and his friend Benjamin decide to follow up on this and sneak into Mrs. Coulter’s flat in the dead of night. It doesn’t go well.

When the lads get busted by Mrs. Coulter and CGM, Tony manages to escape out the window, but Benjamin is not so lucky. Mrs. Coulter slows him up with a bullet (of course she has a pistol), but the part that is really fun to watch is when CGM goes after Benjamin’s hawk daemon, and Mrs. Coulter goes after Benjamin with her own hands. Through very deliberate camera work, and brilliance on the part of Ruth Wilson (who has spent so very much of her career being terrifying), we get to see that there is more than a soul-type bond between a human and their daemon. 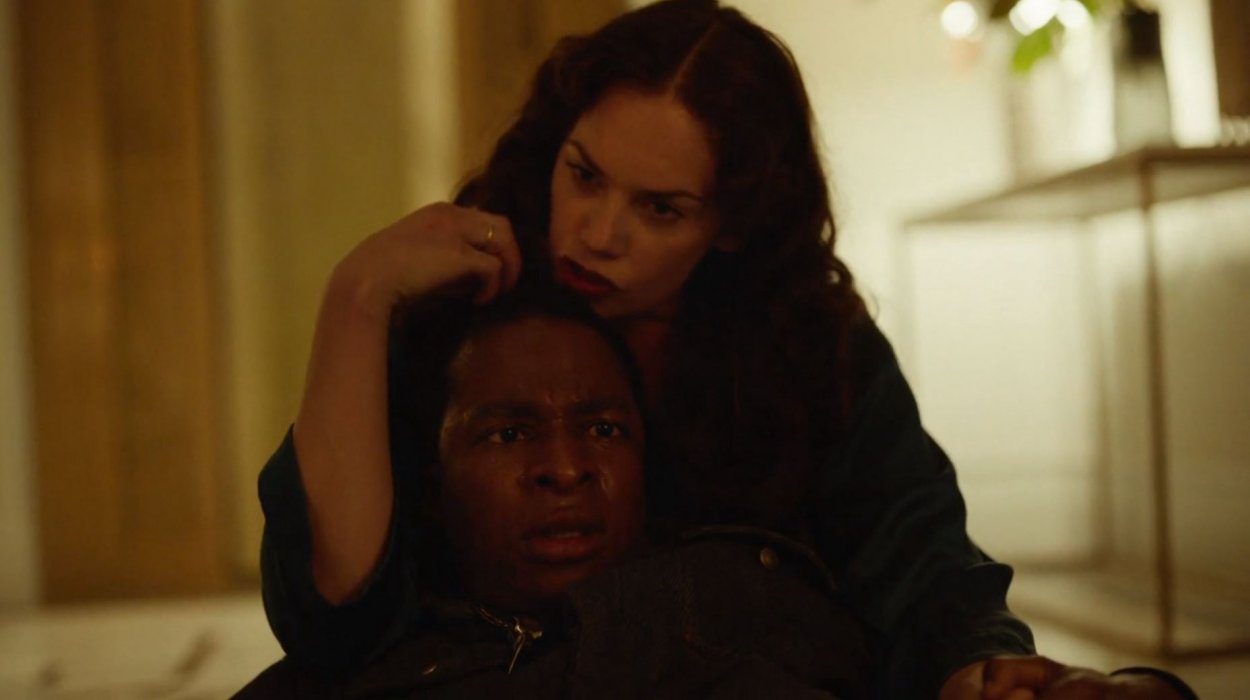 Maybe it’s something special to having a monkey as a daemon, but Mrs. Coulter’s movements become deliberately simian, and she fights the same way that the monkey does. It is impressive that Wilson manages to, well, ape a monkey’s movements, yet remains dignified and scary. What is less impressive is the actual human-to-human fighting—the one hit that Benjamin gets in on Mrs. Coulter is terribly executed. She’s all set to torture him for information, but he’s a big damn hero and throws himself down the elevator shaft, choosing death over potentially betraying his people. His daemon goes poof and disappears into a cloud of dust, and CGM gets to be a little bit cute along with the creepy for just a moment, as it curiously bats at the dust before the last of it vanishes.

The subplot of Carlo Boreal and other worlds is alive and well. He keeps sliding into our own world to meet with his friend Thomas, still hunting for the Jordan scholar he believes is here. Carlo points out that no one in Thomas’s world is born with a daemon, so that’s telling on whether the scholar was originally from that world or the other. I’m guessing someone from Lyra’s world could tell the difference between someone from their world who has a daemon and someone from the other who has, say, a service animal.

This show is still making weird choices over what it wants to show as opposed to what it wants to tell. When Lyra runs off from the Gyptian compound because she is fed up with people being less than forthcoming with her, Ma Costa follows and compensates by blurting out that Mrs. Coulter is, in fact, Lyra’s mother. The news naturally comes as a shock to Lyra, and the whole scene plays out kind of weird. It turns out that Ma Costa was Lyra’s nurse back in the day, so she was there for a lot of the torrid affair between Lord Asriel and Mrs. Coulter, who was married to someone else at the time. You would think that, with film as a medium, that this could be shown in some way (with a flashback or the like), but they simply stand there as Ma Costa tells the tale. It doesn’t help matters that the dialogue in this episode felt particularly clunky as compared to the previous two. Still, I totally called it when I said that Mrs. Coulter talked about Asriel like he was an ex. 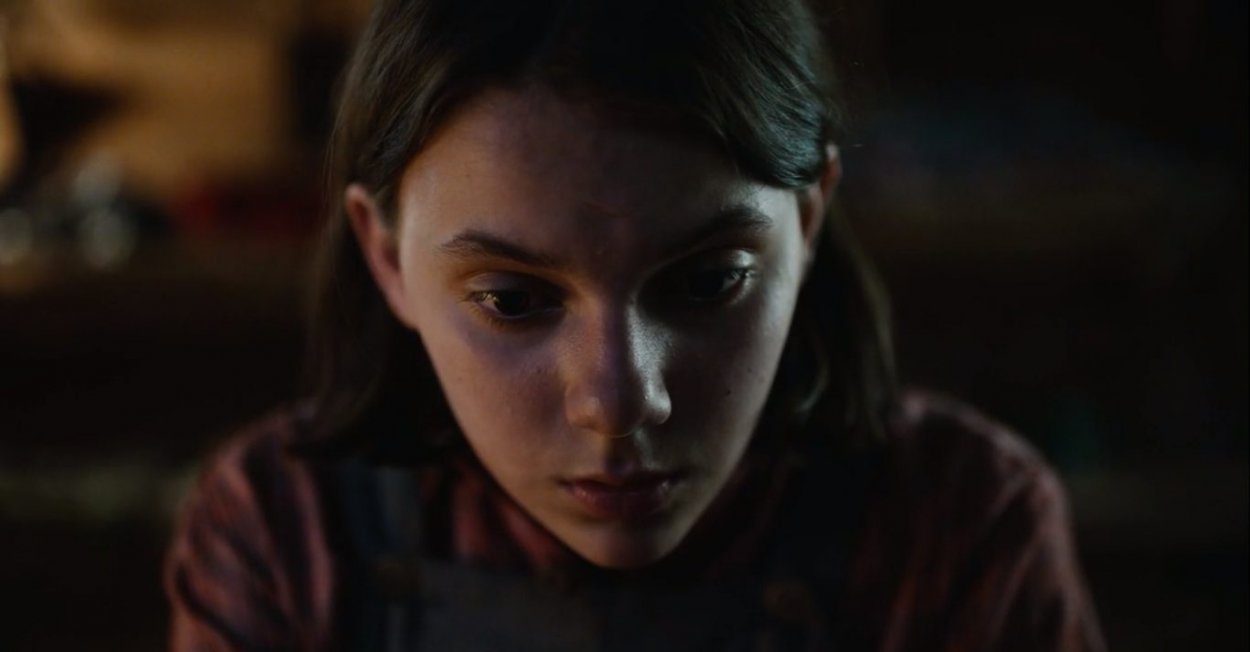 We still don’t know what Asriel’s actual deal is or what makes his daughter one of those Chosen types. Lyra’s been spending time with the alethiometer, and Farder Corram is wowed by the discovery that she can operate it without all the books that everyone else needs. She’s got an innate talent for it, or something—Pan says that emptying her mind, which is the first step in using the alethiometer, ought to come easily to Lyra. I’m not sure if that’s him being snarky or not. Ma Costa does her best to put an almost loving spin on the Spy-fly by calling it a symbol of Lyra’s mother’s desperation to find her. I’m not sure even a kid would buy that.

I hate to admit it, but the most exciting part of His Dark Materials S1E3 was the coming attractions for Episode 4. Finally, it looks like they’re giving me what I wanted when I signed on to this show in the first place: CGI polar bears and Lin-Manuel Miranda! Scruffy, weirdly hot Lin (not that he isn’t normally, but Lee Scoresby looks like a particular type of hot that is different from Lin’s usual hotness). I do hope that the episodes become more consistent and we’re not stuck in a Star Trek even/odd thing. Even if that turns out to be the case, though, next week looks amazing. Can’t wait to see what’s next!

Cat Smith is the reigning Miss Nerdstiles, having inherited the crown from absolutely no one, because she made it up. She is an actor, a musician, a cosplayer since before they had a word for it, and a general nuisance (General Nuisance *salute*). She and her ukulele have charmed the collective socks off of LI Who and LI Geek, ReGeneration Who, WHOlanta, Potterverse, Coal Hill Con, Time Eddy, MISTI-Con, Hudson Valley Comic Con, Wicked Faire, SqueeCon, The Way Station, and The Pandorica Restaurant . She has written for "Outside In" and "Why I Geek" (among others), and you can find her music on bandcamp at https://missnerdstiles.bandcamp.com/album/who-riginals. Consider supporting her continuing adventures by becoming a patron at patreon.com/missnerdstiles