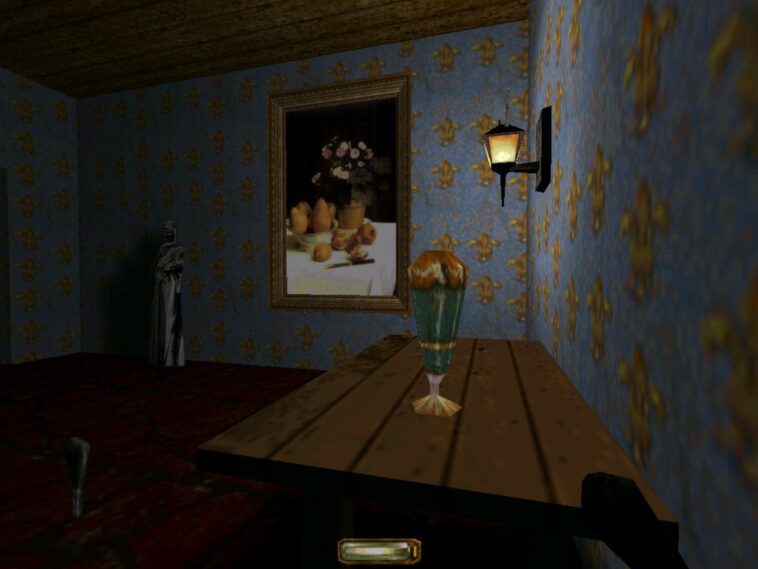 The stealth genre has made a resurgence this past decade with several mainstream hits cementing it as a gaming mainstay. Games like Hitman and Dishonored offer the chance to become a walking shadow, invisible to most. It’s a uniquely thrilling experience, skulking around in the shadows, stealing something, or offing someone, and slipping away unnoticed. The thing about these games though, is that they aren’t pure stealth. In many titles, you can “play your way”, which usually boils down to sneaking around until you’re caught, at which point guns start blasting and you must fight your way out of a bad situation. It kind of lessens the impact of sneaking through a level without sounding an alarm. Not so with the original two Thief games. In fact, Thief represents the genre at its best, and as far as being pure stealth based experiences, they have yet to be matched in gaming despite them having been released about twenty years ago.

In the Thief games you play as Garret, who as a young boy was caught attempting to steal from a Keeper. He was raised and trained by them to move through society like the wind, taking what is needed and leaving no trace of his presence. Keepers are sort of like stealthy Jedi in Thief’s universe, but he rejects them once his training is complete and becomes a career criminal. He steals from anyone and everyone. From the poorest beggar to the richest nobleman, Garret won’t hesitate if he sees an opportunity. One of the most unique parts of his character is his motivation; he doesn’t steal to give to the poor or to bring about some kind of grand change. He steals to pay his rent.

It makes Garret an all-time great gaming protagonist. He is only pushed into saving the world in each game because if he doesn’t, well, he’ll die. Too many games to count have anti-hero protagonists that try to justify the things they do, but Thief subverts that by making Garret a completely selfish jackass. This, combined with the absolutely phenomenal performance by Stephen Russel, makes him a snarky, memorable, and entertaining-as-all-hell player character who is an absolute pleasure to control.

The rest of the writing is no slouch either, with extremely fun banter between guards who discuss anything from the weather, to going down to the bear pits to watch a fight. Combine that with world building that is fun and subtle, and you have a world that feels real, inhabited, and a player character who feels right at home sneaking about mansions and crypts for personal gain.

Thankfully, the strong world building and fantastic characterization are backed up by absolutely top notch stealth gameplay. You’re trained early on in the various tasks you will have to perform throughout the game, from using the shadows, to avoiding being seen, to archery. And while the game does teach you its basic combat mechanics, the most important piece of information it gives the player is to keep your ears open. In addition to using low light to move about like a ghost, you need to be wary of how loud you’re being.

Feedback is important in any video game, both to let the player know when they’ve accomplished something, and to make the game enjoyable. It’s even doubly important in a stealth game, where you are forced to take risks all the time based off the information you have. And here Thief uses brilliant simplicity to give the player all the information they need to succeed. Different floors make different sounds. If you’re walking on a carpet, you can zip around like Sonic the Hedgehog and no one will noticed you. If you’re on metal, you must tread carefully, as the sound of your footsteps will carry. And, further solidifying the brilliant simplicity of the game’s mechanics, guards will talk to themselves about the noise you make. It’s means you have to be aware of your surroundings at all times, and it’s a wonder more games in the genre don’t use their ambient noise to provide feedback to the player.

Something else I greatly appreciate in this game is its combat. That might be a weird thing to say because Garret swings his sword like he has no idea what he’s doing, and the combat can charitably be described as clunky. But that is the brilliance of these first two games. Garret is not a fighter. Sure, you might be able to combat one armed guard, but doing so makes a lot of noise, what with your swords clanging and the guard yelling out in pain. That noise will probably bring another guard, and when you’re outnumbered, the best thing you can do is run and hope you lose the guards. There are no flashy counters like in Assassin’s Creed and no cool supernatural powers like in Dishonored. Guards and other enemies can, and will, gang up on you and take cheap shots.

That means the best way to play is to sneak. The game rewards patient, methodical players. Killing someone leaves behind a bloodstain, which can be cleaned up with water arrows, but those are better spent snuffing torches, as your number of them will always be limited. Knocking someone out with your trusty blackjack will take them out quickly, silently, and efficiently, leaving you to move their unconscious form into a more out of the way area. The only games I’ve seen where stealth is forced on you either involve cheap, one hit kill attacks, or games like Outlast where you run and hide and can’t do anything about your assailants. Thief empowers the player to make informed, calculated decisions that demand precision rather than brute force, and pulling off a perfect heist in the games is nothing short of immensely satisfying.

I would be remiss to not mention the level designs in each game. They are expansive, nonlinear playgrounds for burglary. Sure, each one contains a critical path that must be followed in order to beat the level, but the game doesn’t force you down any one path in order to reach your objective. It rewards exploration and experimentation with quieter, alternative paths. And it doles out its information without ever breaking its verisimilitude. You can purchase tips that might inform you of a secret entrance to whatever place you might happen to be ransacking, or find a hidden cache of equipment. You can find notes that might inform you of a guard’s route, or a piece of reassure. The levels feel organic and plausible, tying directly into the world building and script in a fantastic way.

The games even dip into horror every once in a while, more so in the first one, which does kind of become an action game at times. Several levels feature haunted locales such as crypts, an entire city section, a cathedral, and more. And thanks to the strong sound design, each one is a genuinely creepy, unnerving experience. The undead are formidable too, requiring holy water arrows to be put down for good. A latter third jaunt through the aforementioned cathedral is particularly intense, as every enemy is an undead and very tough to put down with your extremely limited resources.

At a glance, this series is showing its age. The early 3D nature of the graphics might put some people off, but the first two games’ gameplay and world building have aged like fine wine. The games make extremely smart but brilliantly simple choices to make the player feel like a master thief. Add on top of its fantastic mechanics some top-notch level design that’s just open ended enough to give players a rewarding feeling, as well as a wonderfully cynical, unforgettable protagonist, and you have, in my eyes, the greatest stealth games ever made. They utilize such simple ideas that it’s a wonder more developers don’t imitate them, mainly with the games’ use of sound.

As a side note, I actually enjoyed Deadly Shadows, but it’s not on the level of the original two games thanks to glitchy physics and a half-baked open world that could have been expanded upon. I haven’t played the remake, but I’ve heard it’s ironically a Dishonored ripoff, which is funny since Dishonored is very clearly inspired by the early Thief games, going so far as to have Stephen Russel voice Corvo Attano in Dishonored 2.

All images taken from the games’ Steam pages.