Call me a cynic, but I’ve never had any hope of Elliot’s plan to take down the Deus Group working. Yet, by the end of Mr. Robot S4E9 “409 Conflict” it seems to have done just that. Their bank accounts have been emptied, and the FBI or something is breaking down Whiterose’s door, meeting a hail of bullets. Are they there because of the doxxing of the Group, I wonder, or because Zhang shot Price dead right out in the open? 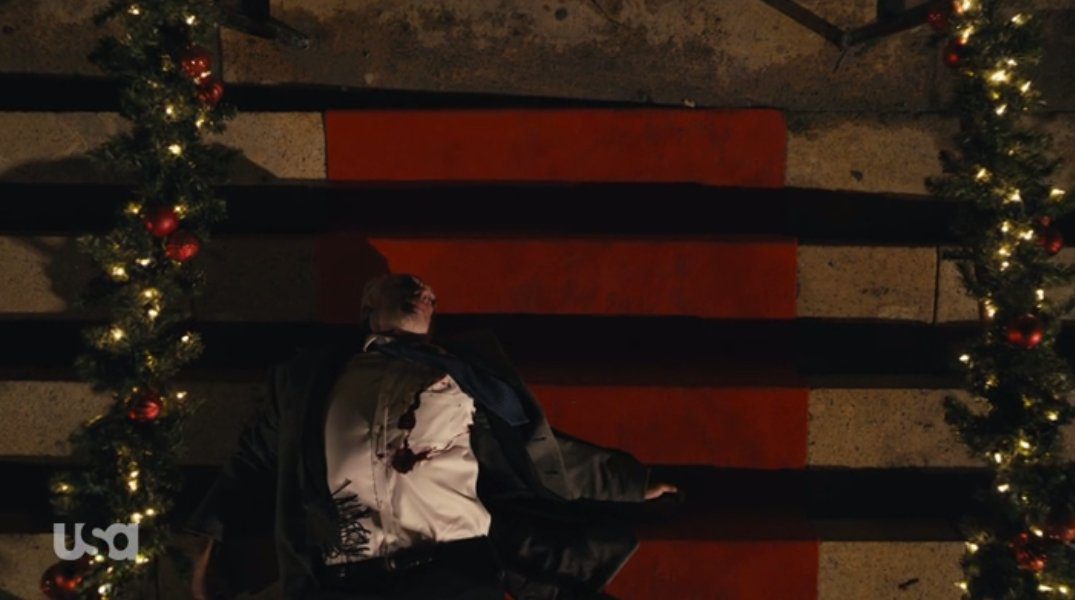 I guess the part of the plan I was missing before was the releasing of Deus Group’s misdeeds to the world, but, honestly, that’s because we all already know the misdeeds of men like this. And it doesn’t matter. They get away with it.

Perhaps that’s because we can’t pin it to them. Perhaps that’s because in the real world it’s far less clear that there is some conspiracy, and more possible that it is just a bunch of disparate factors that collude to create the reality we live in, but nonetheless I find the idea that this thing that Elliot and Darlene have pulled off will fundamentally change things to be implausible.

Take the money from the richest and most powerful men in the world, and they’ll get it back. They’ll ask, politely. They’ll tell the Powers That Be about how it was illegally taken from them. And they control those powers, anyway. That’s the whole point, isn’t it—that they pull the strings of those putatively in control of the world’s governments?

But do we expect those presidents and politicians to all of the sudden want things to change? Should we think of them like hostages to this super elite cabal? I don’t think so. I’d expect, rather, that they’ll want to return things to how they were, because they benefit from the arrangement. And when money is just a number on an electronic ledger, how hard would it really be to give it back?

Or are we to believe that the power of the people (represented by those who show up outside of the barricades at the Deus Group meeting) will be enough to keep this from happening? It is perhaps sad that I have trouble buying that.

At least Mr. Robot recognizes that this is a question, as when Whiterose asks Price if he really believes she can’t survive being doxxed, and he says, “I’m as curious as you are.” Because that strikes me as the more important thing than the money at the end of the day. Not that it would have been sufficient on its own, but if the whole plan is to ultimately work it seems necessary that there be something to keep them from just getting their money back. And if there are criminal charges while they lack the money to make them go away then maybe, just maybe, this whole thing has a shot at working after all.

Where would that leave us, though? Mr. Robot was smart in the way it explored the aftermath of 5/9 and the unintended consequences of it. Will we see something similar here? Perhaps the Deus Group, as insidious as they were, helped to keep even worse forces in the world in check?

That would risk Mr. Robot veering into the domain of some kind of apologia for neoliberalism, but I’m not sure what a better option would be in terms of the politics of the show. For this to work and usher in some kind of world free from the yoke of the Deus Group would feel unrealistically optimistic.

Of course, a lot of things have felt a bit unrealistic in Season 4, from Elliot apparently recovering from a heroin overdose immediately, to the whole heist he and Darlene would seem to have pulled off with no sleep, and his escape from the cops afterwards. Equally that the Dark Army couldn’t find him when his secret hideout has been his old place of work, and number of other things.

It’s entirely possible that these are all just things for one to accept on the basis of the fact that Mr. Robot is a TV show. My point is not at all to criticize the show for its implausibility. Rather, it’s the fact that it is this show—one where we spent the majority of Season 2 being shown a version of events framed through a lie—that makes me wonder whether perhaps it isn’t reality that we’re seeing in some way.

What do we make of the fact that when Elliot calls Price in Mr. Robot S4E9 the latter’s phone says “No Caller ID” in conjunction with the fact that in S4E5 we saw him once identified as “Elliot” and another time as “Elliot Alderson”?

A Meeting of the Minds

Magda: How is he?

Magda: We aren’t going anywhere. You know where he is. You need to bring him here.

Mr. Robot: It’s not that simple. We’re gonna have to help him through this.

Young Elliot: Mom, maybe we should just tell him now, about everything. Then Elliot will be OK. Right?

Magda: When will he be ready? You’ve let this go on far too long.

Mr. Robot: It’s a little more complicated than that. I didn’t know everything that was happening.

Magda: That’s a lie. You’ve been part of these shenanigans from the beginning. You encourage it.

Mr. Robot: Okay, okay. Just stop. Yes, I’ll admit it. I did. I never thought he’d take things this far. There’s nothing I can do now.

Magda: Just talk to him.

Mr. Robot: We have to finish his mission. Once the hack is done, maybe then I can get through to him.

Magda: And how are you gonna do that?

Mr. Robot: I’m gonna show him what he did.

Magda: And if it doesn’t work? We can’t go on like this…and that poor boy. We may lose him forever. For God’s sake, he hasn’t woken up since…

Mr. Robot: That’s not true. Darlene. She said they talked two months ago. He woke up for her, which means she might be the one who could help us.

It seems clear to me that this scene occurs in Elliot’s subconscious, or unconscious mind. Some may want to parse those terms, and I may be among them, but we don’t really have enough to go on here to know which is the more apt. Either way, though, this seems to me the most likely interpretation—that we are in Elliot’s mind when we see Christian Slater walk into that boardroom and talk to Magda and the Young Elliot. 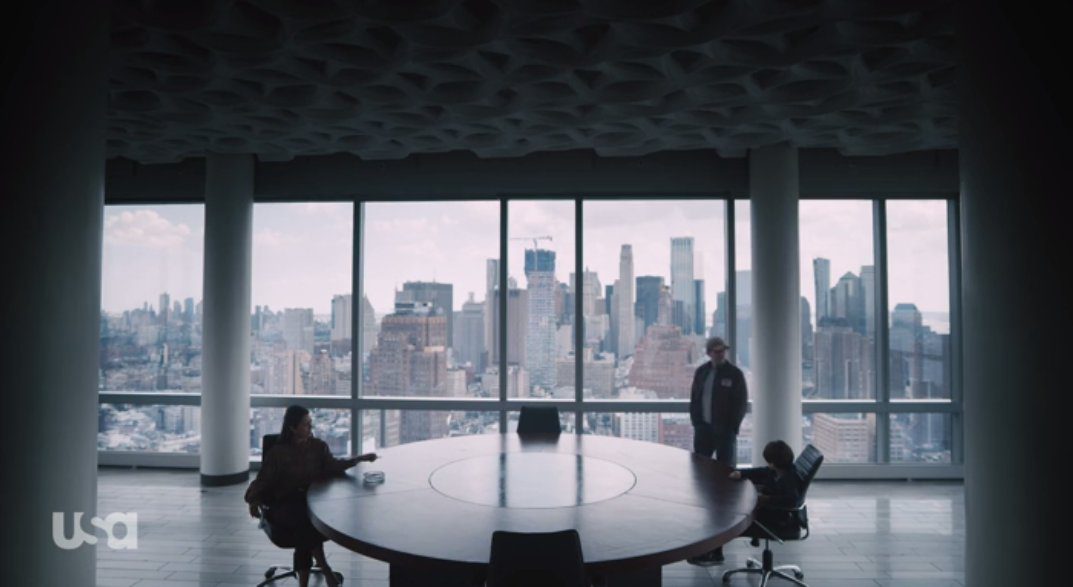 I say Christian Slater because there are some who think that maybe the question of whether he is wearing his hat or not is the key to things. But I am not one of them.

It’s clear that this is a follow-up to the scene from the beginning of the season, which saw Magda chastising the Young Elliot for sitting in the chair that is now empty, where she said they had to wait for “the other one.”

We don’t get answers as to who that is, though, so much as more questions. What’s not going to happen today? Who is “he”? What did he do? How might telling him about everything make Elliot OK? What are the shenanigans? Is “he” the “poor boy”—and is this different from Elliot, or are “he” and Elliot somehow one and the same? 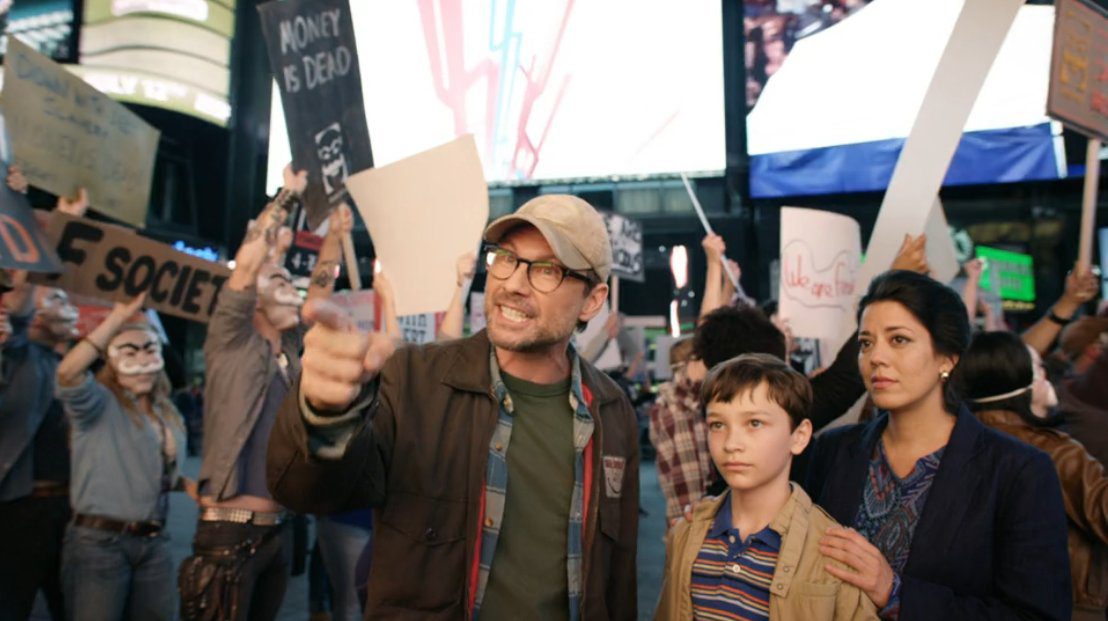 We saw Elliot interact with these three at the end of Season 1 in Times Square. He was surrounded by f society protesters as he insisted that these images of his father, mother, and self were not real. This led Mr. Robot to go on a rant about whether anything is real, and how we all live in fantasy.

That’s interesting, but even more so for present purposes is how when Elliot yells that he wants to be alone, all of the protesters disappear, leaving us with the eerie sight of a Times Square devoid of people. I didn’t think much of this at the time—or perhaps I did, but just didn’t think much about it—but I now wonder if it’s another clue that what we’re seeing isn’t “real” in the traditional sense. I really don’t want some resolution where everything ends up just being in Elliot’s head, but this does seem to me like an indication that the rug might be pulled out from under us once again in some way.

Also: where is Darlene in these representations? We have Elliot’s whole family, except for her. Put that together with how Mr. Robot says she might be the one to help them, and I have to wonder if her absence means something.

Regardless, my wager is that “the other one” that they are waiting for will not be any character we have seen other than Elliot. It will be a version of him, either from before all of the events of the series happened, or from some point in this succession of events. He is the boy they are taking about, who came out for a moment to Darlene. Or something like that. Who knows where this is going.

Will We Find Out About Whiterose’s Plan?

Mr. Robot S4E9 saw Price giving Elliot a drive that supposedly will tell him everything about Whiterose’s machine, and Whiterose trying to convince Elliot that Angela is still alive. I still wonder what she showed Angela, and about the project in general, so I hope we find out.

I could see a version of Mr. Robot where we don’t, with the final four episodes focused on Elliot’s psyche. But I have to think he’ll at least look at Chekhov’s flash drive, and thus that we’ll get some more information. 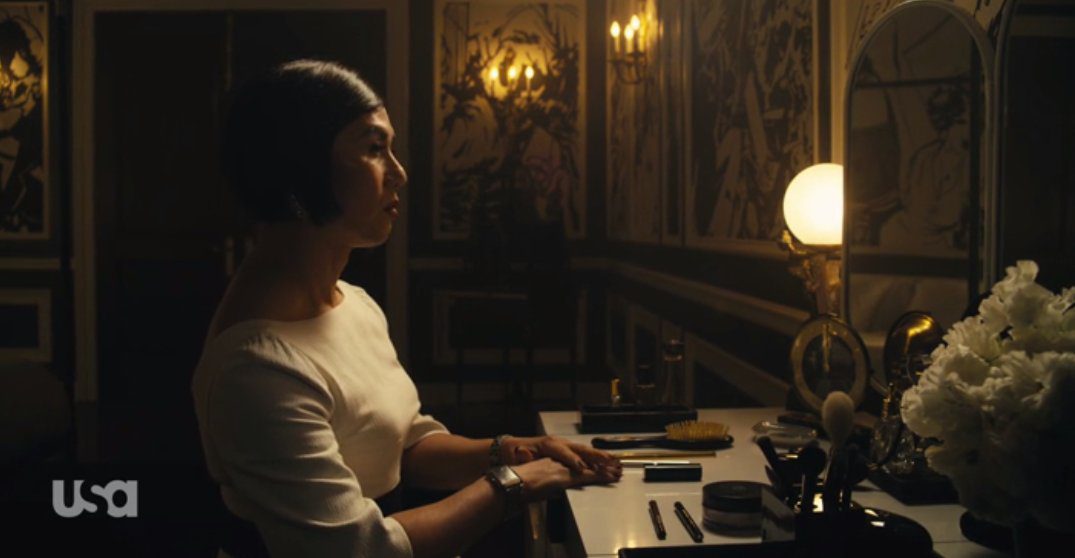 I honestly have no idea what Mr. Robot is going to do with these final four episodes given the way that S4E9 ended, and I suppose that’s a good thing. Elliot could look at that drive and be converted to helping Whiterose, or this all could be left behind in favor of his psychological drama. Tyrell could somehow not be dead (even though I am pretty sure he is). Dom might do something interesting (or be dead).

I just hope, at the end of the day, that this isn’t all some fever dream Elliot is having as he dies from that heroin overdose.