Star Trek predicted many technological developments. I recall hearing Neil DeGrasse Tyson at one point saying that the thing that struck him as the most fantastic as a child watching the original series was the automatic doors. We have those. And while we may not have transponders, our smartphones are getting close.

I recall an episode of Deep Space Nine where Bashir has gathered the records of many people and has in his hands what look like many Kindles. The most implausible thing now is that they thought there would need to be so many. 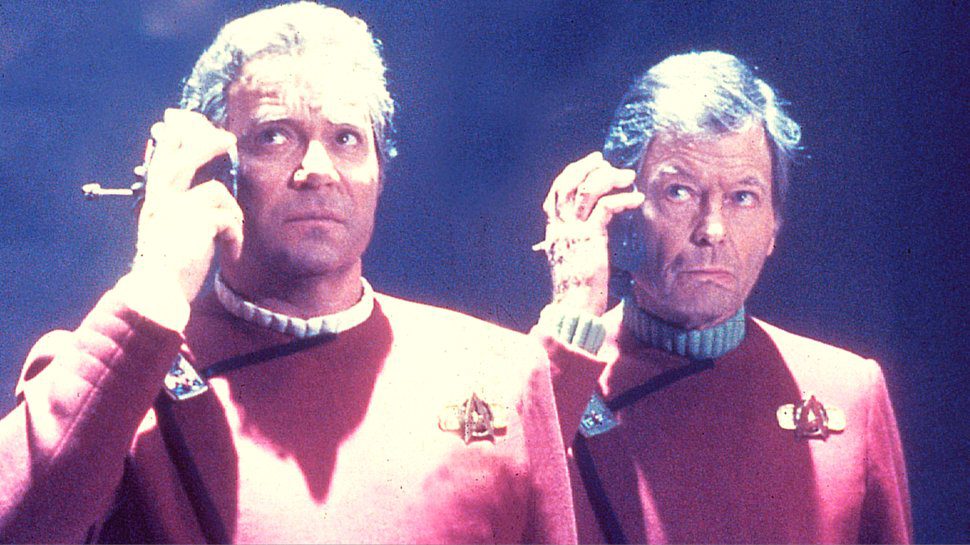 In the real world, we’ve gotten close on this front, as various programs are learning algorithmically from the behavior of their users. But to create something that could translate any language on Earth is a far cry from being able to create something that could translate any alien language we might come across. You can’t do that with algorithmic learning. What you’d need is a truly universal grammar.

There are some who have suggested such a thing—Noam Chomsky, for example—but even then the thought tends to be limited to human beings. To suggest that there is some structure of language that would extend even out into the great beyond? That seems outlandish.

Even if there were a universal syntax, the semantics of the language would be beyond this. To make the idea plausible at all, we’d have to have the Enterprise requesting extensive records for the computer to work through, or something like that, at very least.

Star Trek largely ignores this. It’s like the transporter, which was apparently concocted more as a solution to a narrative problem than anything else. You can’t just have these species be unable to communicate with one another and have a show!

But we get an episode, at least, that grapples with it. Star Trek: The Next Generation S5E2 “Darmok” has our friends encountering a species with whom the universal translator does not work. They’re friendly, but the inability to communicate brings its own perils.

I’m not sure if the Tamarians’ language is feasible. It functions on the basis of example, and metaphor, but how would such a thing get going? It’s an interesting thought. This is a language formed wholly of symbols, and it calls attention to the function of such in language generally. Symbols, idioms, and metaphors are central to our understanding. And does that mean somehow standing under a thing and looking up at it?

It’s worth thinking about these structuring metaphors, and these images that form points of significance in our linguistic structures. The idea of the Tamarian language is fascinating, but again, how could it get going? How could you have a language without verbs? Shaka, when the walls fell.

Unless that’s completely wrong, and, as Ian Bogost has it, the Tamarian language functions in terms of abstract logics where the details are unimportant to communication. It’s an intriguing suggestion (and, seriously, read that article!) but even if we follow it, the heart of “Darmok” remains one about misunderstanding. Indeed, if Bogost is right, it’s even worse, as coming out of the situation, our friends on the Enterprise continue to fail to understand what they’ve just experienced. 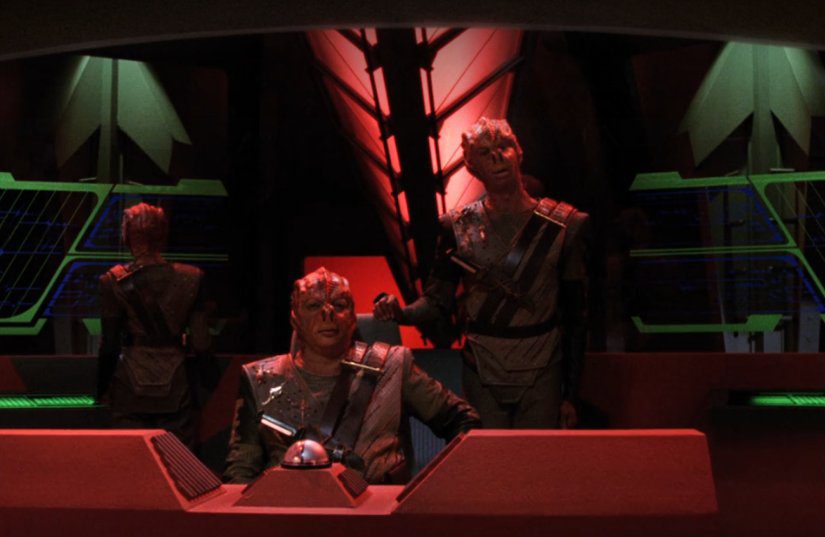 At the beginning of the episode, Picard is told that the Federation has found communication with the Tamarians to be impossible. To this, he replies:

In my experience communication is a matter of patience, imagination. I would like to believe that these are qualities which we have in sufficient measure.

He would like to believe this is the case—and perhaps it is when it comes to Picard himself, given the ground he gains in the episode—but when he talks to Dathon for the first time he kind of acts like an American who thinks a non-English speaker might understand if only they speak louder:

Picard: Would you be prepared to consider the creation of a mutual non-aggression pact between our two peoples? Possibly leading to a trade agreement and cultural interchange. Does this sound like a reasonable course of action to you?

They don’t understand each other, but it is Dathon who fundamentally understands that they don’t understand each other. It’s his plan—Darmok and Jalad at Tanagra—that sets the primary events of the episode in motion. But it is worth noting that this seems to be Plan B. We never really learn what Rai and Jiri at Lungha means, though we can infer that it involves the two meeting at a place that is home to neither.

And it is also worth noting that the Tamarians are at least as technologically advanced as the Enterprise, if not more so. This isn’t some primitive species we’re talking about here. However their language works (and again, go read Ian Bogost’s piece for The Atlantic from a few years back!), they are sophisticated.

When they get to the planet, it is Dathon who continually makes the effort to get Picard to understand. Jean-Luc thinks at first this is maybe about a duel (stupid human), but it’s not that. Temba, his arms open. Take the knife, not to fight me but because of the beast.

Picard slowly learns, and the way in which he does so forms the heart of the episode. He is indeed patient and imaginative enough to come to an understanding with Dathon, though I would insist a lot has to do with the efforts of the latter—take for example his offering of fire, or his patience as he more than once offers Picard the knife.

At the end of the day, Picard has understood, and garnered enough of the Tamarian language to be able to speak in it to the crew of their ship. He’s also told Dathon a story about Giligamesh, which the latter seemed to enjoy, for what it’s worth. And I find that interesting.

To what extent did our Tamarian friend understand the story? It’s hard to say. But to the extent he got it we could put a lot down to Picard’s hand gestures and get to thinking about these nonverbal aspects of communication. Dathon seems tuned into those, and perhaps this is another level of Tamarian communication worth thinking about. Maybe inflection matters, for example? We certainly have Earth equivalents of that. 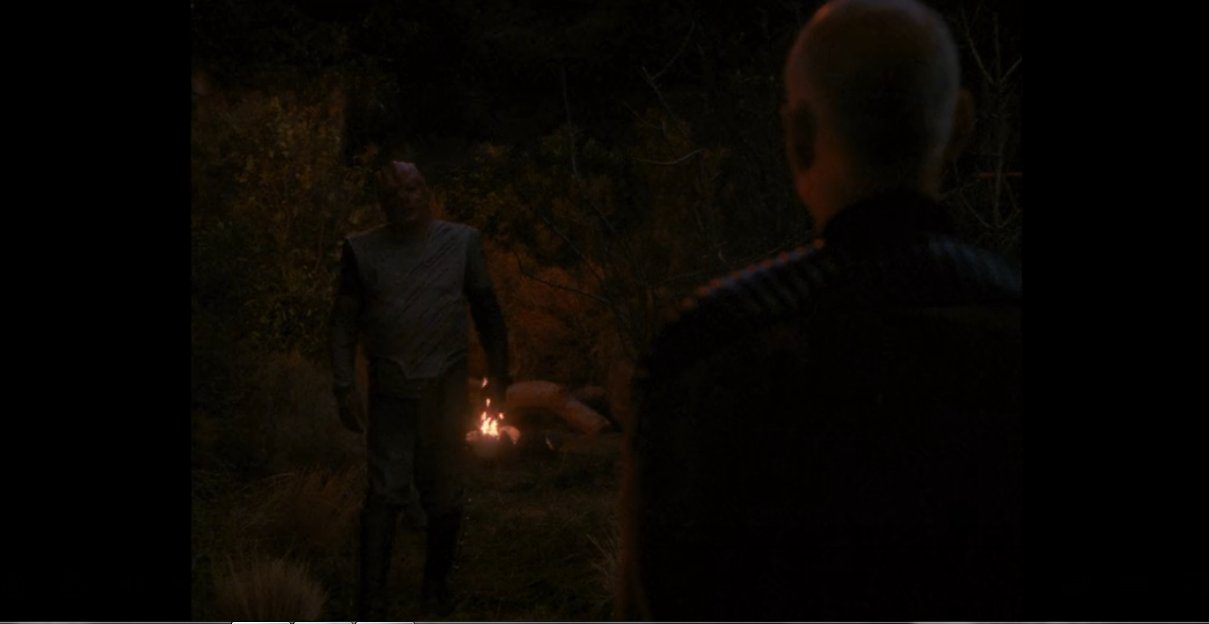 The tragedy of “Darmok” occurs in its middle. Dathon has finally gotten Picard to take a knife (Temba, his arms open) because there is a beast on the planet coming to try to kill them. We never learn much about this beast, because that’s not the point. The point is that Darmok and Jalad came together as strangers but bonded through battle with a common foe.

And the reason is that the Enterprise crew is diligently trying to get their Captain off of this planet where they don’t know what’s going on. They’re not wrong. Picard didn’t go there of his own free will, after all, but was whisked away on the whims of this alien Captain whose words they can’t even make sense of.

They don’t know whether it is some kind of duel, or fight to the death, or some other kind of nefarious trap. Of course they are thus doing everything they can to get Picard back, and even though he’s told the attempt with transporter might not work, Riker says go for it. A chance is better than the terrible uncertainty they’ve been left with.

What they do not know, and cannot know, is that their attempt to transport Picard off the planet will come at the worst possible time, and cause Dathon to be fatally wounded. This is the tragedy: too logics face down, both of which make sense, but when they come into contact with one another…calamity.

The Enterprise crew couldn’t know that Dathon and Picard were entering a battle at that moment that it would take both of them to have any chance to win, just as Dathon and Picard couldn’t have known that this intervention was coming.

Perhaps it is in human nature to expect the worst of one another (it certainly is in Klingon nature!) but you don’t even have to go that far to understand Riker’s decision. Not knowing what is happening is enough. Knowing that Picard was taken against his will is enough. But then, as it happens… 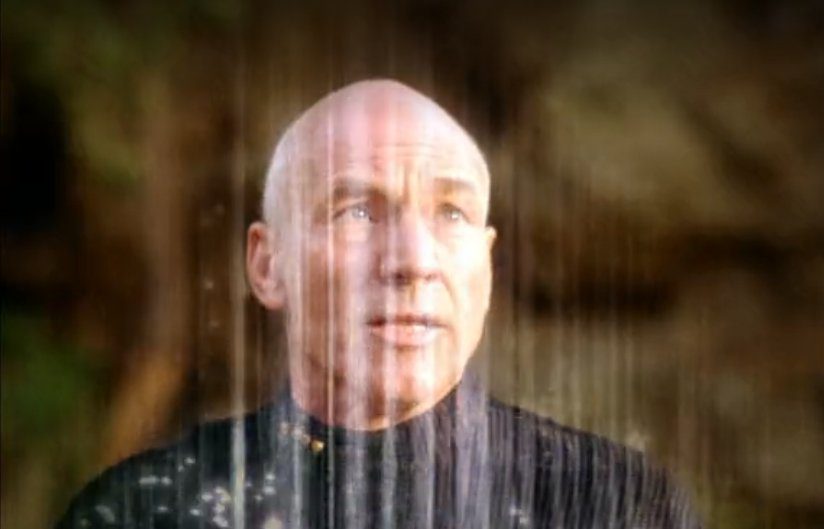 One of the most striking things to me about “Darmok” is that Picard doesn’t get angry. He and Dathon come to an understanding. Dathon dies. He gets transported back to the Enterprise and proceeds to use the knowledge he has learned of the Tamarian language to defuse the situation.

He knows that what the crew did led to Dathon’s death. But he doesn’t dwell on it. We could well imagine some other Starfleet Captain, be it Kirk or Janeway or Sisko, railing against their crew for how they messed up this situation. But not Picard.

He understands why they did what they did, and recognizes the logic of it. They don’t even have to talk about it.

Picard moves past that all too human frustration so seamlessly you might not notice it. Because by this point in the series we know that this is who he is. He’s patient, and imaginative. He’s kind. But perhaps more than anything he’s pragmatic.

He rushes to the bridge to talk to the Tamarian crew. He explains to them what happened using the phrases he has learned from Dathon, and friendly relations seem to be established.

At the end of the day, Picard believes he has come to understand the Tamarians, but has he really? He is still thinking it is about metaphor and myth, whereas in order for the Tamarians to truly function and be as technologically advanced as they are, Bogost almost has to be right: these phrases must operate more as a shorthand for certain strategies, or whole complexes of thought.

One can question how the Tamarian language could possibly work, as I did a bit towards the beginning of this essay, but if we take things at face value and accept that they not only get by but have been able to create technology that might surpass that of humanity, then it would seem that Picard has only scratched the surface of understanding this very alien species.

And the degree to which he thinks he understands may in fact stand in the way of a deeper understanding—that is, it may itself involve a misunderstanding. And insofar as our position as an audience is mediated through that of the crew of the Enterprise, perhaps we are left with a false understanding as well. “Juliet on her balcony” is a poor comparison inasmuch as that may be a symbol for love whereas “Darmok and Jalad at Tanagra” is clearly a plan Dathon is proposing at the beginning of the episode.

Of course, it wasn’t the initial plan. That didn’t work. Rai and Jiri and Lungha. What was that about? We don’t really know. And if we think we do, well…Shaka, when the walls fell.

Star TrekStar Trek: The Next Generation