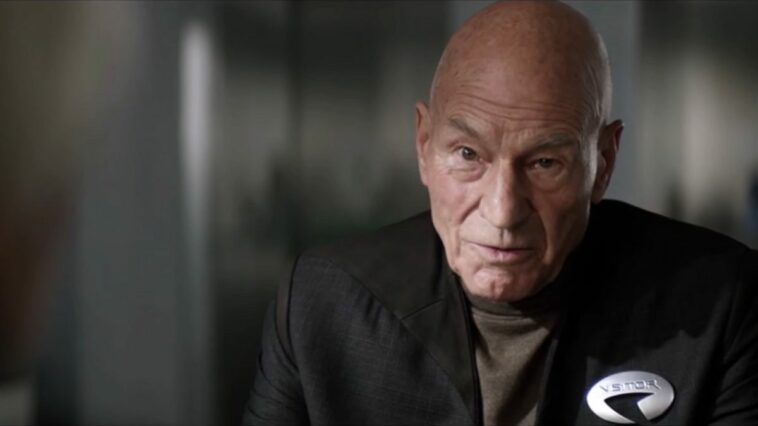 Welcome back, dear reader, as we continue to review Star Trek: Picard with Season 1 Episode 2, “Maps and Legends.” As explained in several interviews, this episode is really part two of what could be viewed as a three-part pilot. As such, it is still heavy on the exposition and light on the action. There were a surprising amount of answers to questions raised last episode, as the new questions lead to a widening and deepening of the series’ overall mystery.

We’re going to talk briefly about the comic first this week, since the final Issue #3 was just released on January 29. If you don’t want to be spoiled, just jump ahead to the next section.

I already gave a brief recap of Issues #1 and #2 in my pre-series article “Preparing for Picard.” Issue #3 picks up where we left off at the Romulan Colony on Yuyat Beta. Zhaban and Laris bring Picard and Commander Raffi back to the governor’s palace under the guise of escorting them as prisoners (the oldest trick in the book). After diplomacy fails, they take control of the command center and Picard contacts the Verity, only to find the Romulan Governor in control. She’s barely done making threats when the crew regains control behind the scenes and the Romulan intruders are all beamed to the brig. Picard extends the offer to Laris and Zhaban to beam up to the ship for their own safety.

Aboard the Verity, a Romulan vessel (Tal Shiar more specifically) uncloaks and contacts Zhaban and Laris. We find out that the Tal Shiar have had agents embedded on multiple colonies waiting for this moment. Zhaban takes control of the ship once again and is ordered to engage the self-destruct, leaving Picard and crew behind to die. Zhaban, moved by what he has seen of Picard’s sincere desire to protect the citizens of this colony, Romulan and native, betrays the Tal Shiar and gives control back to Picard.

Sometime later as the evacuation is underway again, Picard extends the invitation to Zhaban and Laris to go into hiding from the Tal Shiar at his vineyards back on Earth. The comic ends with him contacting Geordi once more, relaying that “the future is bright, Mr. La Forge. Very bright indeed.” Reading this now, that comes off as very poignant, knowing that the attack of the shipyards is probably only days or weeks away from this happy ending.

One moment that stands out in this issue happens when Picard beams back aboard the Verity and the Lieutenant who was left in charge tries to apologize. Picard tells him, “You did precisely the right thing, Lt. Newton. You offered to help people in need. That those people would then betray you was no fault of yours. More importantly, you must maintain that impulse to help. Do not let suspicion undermine it.” This insight seems very much so in line with the picture of Picard’s character that is being formulated in the series.

At last, we get to see a bit of the Mars attack and not just hear about it secondhand. That was brutal. F8’s human co-workers really didn’t stand a chance. The way F8 terminates himself in the end would seem to rule out the idea that the synthetics were rebelling to free themselves. They were used as weapons. We see a brief flash in his eyes before he goes “rogue”—being “activated,” to use a term we heard last episode.

It’s interesting to note here that the synthetics working at Planitia are not just deficient in human mannerisms and humor, they are given a specifically dehumanizing appearance. Shaved heads. Non-descript jumpsuits. A number for a name. Just like prisoners in a jail or concentration camp. “They’re not people,” as one of F8’s co-workers says when he’s not in the room. Exactly how you would want to treat your slave labor force.

Given the date on the title card at the beginning of this episode (“Mars, 2385—14 years ago”), we now know when Short Treks: Children of Mars was set and have confirmation on when Star Trek: Picard is set. To put it all into context:

Speaking of synthetics, we learn that Dahj’s entire identity was built from scratch three years ago. She was set up to be the perfect candidate for the Daystrom Institute, and no doubt Soji’s credentials are equally impressive for the work she’s doing at the Romulan Reclamation Site. So we have one sister planted within the Federation researching synthetics, and the other planted within the Romulan Free State researching the Borg. Hmm, interesting.

Almost as brutal as that opening scene was the dressing down Picard received at the hands of Admiral Clancy. First the setup, as he’s checking in at the security desk. “It’s nice to see you up and around, Admiral.” And without his walker even! Ouch. Then he comes waltzing into the Admiral’s office, thinking they’d just let him check out a ship and crew like it was a library book. As if the last 14 years, and more importantly the widely broadcast interview of the previous day, never happened.

And thus we get our first F-bomb of the series (Discovery has had a few), and to be frank, it was kind of well deserved. The attack on Mars put the Federation in a bad place and decisions had to be made. The Federation does indeed make life and death decisions about entire species every day. Even by their inaction, i.e. the Prime Directive, they are often making such choices. Now, she does go a little too far in calling his story “the pitiable delusions of a once-great man desperate to matter.” To her credit though, the Admiral clearly has some reservations about that and checks in with Commodore Oh “out of an excess of caution.”

Here’s where the plot thickens. It looks like the reason the Zhat Vash are able to operate so freely within the Federation is that they have well placed operatives within Starfleet security. Their “deep, unassuageable loathing” of synthetics definitely shows, as Commodore Oh refers to Dahj as “the thing” and Lieutenant Rizzo talks of Soji’s “fellow abominations” to her brother.

For his part, Narek must not share their loathing, given that his plan for finding the synthetics’ “nest” involves sleeping with the enemy, literally. There may be hope for him yet though. The look he gives Soji when she shows compassion for the ex-Borg they just freed—could he be falling for her? There’s definitely some foreshadowing with the “profound reservations” his cohorts have with his methods.

The best lines of this episode:

Here I try to point you to a few of the more interesting and informative news items over the last week related to Star Trek: Picard or just Star Trek in general:

That’s all for this week. Please let me know your thoughts and feelings about this week’s episode, and any theories you have on what’s to come, in the comments below, or catch me on the r/Picard sub on Reddit as u/catnapspirit. Remember that 25YL will provide continuing coverage of Star Trek: Picard throughout Season 1 and beyond, as well as covering Star Trek: Discovery and Star Trek in general.