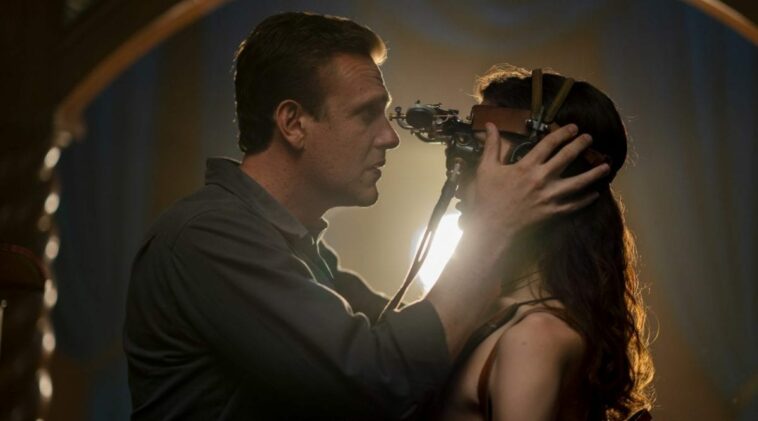 When I first saw the trailer for Dispatches from Elsewhere, I was intrigued. Now that I have had the opportunity to see the first few episodes, I must say I am properly hooked. The feel of the show is something completely novel, so if I make some comparisons to other programs in what follows, know that I am suggesting at best a tenuous kind of similarity, with the intention of motivating you to watch Dispatches from Elsewhere, and not suggesting anything further than that.

Richard E. Grant may be my favorite part of Dispatches from Elsewhere so far. The show begins in the same way as the trailer, but carries forward from there. As Ocatvio, Grant is both our narrator and a character within the narrative of Dispatches.

From the beginning the question of the reality of things thus gets going, as the fourth wall is broken during the opening narration, but not by Octavio exiting the work so much as by him drawing us into it. He notes that we are watching an entertainment called Dispatches from Elsewhere and assumes we are familiar with the form such entertainments tend to take. As a gift, he offers to dispense with some of that and save us 20 minutes of our lives.

Thus the unique tone of Dispatches from Elsewhere gets going. It is somewhat hard to describe. There is a magical realism to it, perhaps, and a quirkiness I find to be somewhat reminiscent of a show like Maniac. Of course it may just be that the show is fun in a similar way, and/or the inclusion of Sally Field.

All around, Dispatches from Elsewhere is brilliantly cast. Jason Segel is perfect for the character of Peter, who has been plugging through the doldrums of life and “work stuff.” Eve Lindley’s Simone gives us an entry point more laden with anxiety. Janice (Sally Field) faces a potential turning point in the latter part of her life, and Fredwynn (André Benjamin) has a tendency toward conspiratorial thinking.

These four perspectives are important as we enter into the plot of Dispatches from Elsewhere, which revolves around the Jejune Institute and a “game” that our four protagonists become participants in. Of course, the question as to whether it is a game or “real” is an important element of what makes Dispatches such a pleasure. The characters themselves grapple with this, and disagree. Or, rather than framing it as disagreement, it might be better to say they each have a different disposition in regard to how they approach what is going on. And none of them really knows what is going on. Neither do we.

In this way, when Octavio breaks the fourth wall in the opening minutes of the show, he sucks us into its narrative insofar as we’re in fundamentally the same position as the main characters, wondering what just is happening and how we ought to be thinking about it. Presumably Octavio himself knows what is going on, but his relation to us mirrors his relation to the characters within the universe of Dispatches from Elsewhere. In short, he may know what’s going on, but he’s not telling. He’s not interested in telling, so much as he is in getting us thinking.

He compares each character to “you”—that is, the viewer—not so much to get us to empathize (though there is that) as to hopefully open within us these different perspectives on the world. The game offers something. There is something alluring about it, in its strangeness and mystery. The wager that Dispatches from Elsewhere makes is that we have a desire for this—something beyond the ordinary. Is it real? Well, what is real, anyway?

It is worth noting that the idea for Dispatches from Elsewhere is based on something “real” that occurred in San Francisco between 2008 and 2011, and which has been documented in the 2013 film, The Institute. I didn’t know this going in, and as I looked into it was a little disappointed just how much in Dispatches seems to have been based on real life events, but at the end of the day I think that is unwarranted. After all, the fact that Dispatches from Elsewhere exists in the world of fiction opens up greater possibilities for where it could go, and I will be interested to see how it might stray from its source material as it proceeds.

I don’t know if I’d recommend watching The Institute or looking into things too much before watching Dispatches from Elsewhere. One should be able to enjoy the show either way, as there is a difference between a dramatization and a documentary. If nothing else, the acting performances in Dispatches make it worth watching. If you’re like me, maybe go in cold. If you’re like Fredwynn, well go ahead and watch the documentary first if you want. Honestly it’s all so fascinating I can hardly imagine it undermining your desire to watch the show.

With both Legion and Mr. Robot ending in 2019, I was worried about whether TV would continue to sufficiently satisfy my appetite for the strange. But while Dispatches from Elsewhere is perhaps not as weird as either of those shows (and it certainly is not as dark, at least so far), it is filling the desire in my heart for programming that makes me think, and wonder.

It’s also a whole lot of fun to enter into this world. I’m excited to explore it more and to see where this quirky narrative is going.

Dispatches from Elsewhere premieres on AMC on March 1 at 10pm EST. The second episode will air on March 2 in its normal time slot on Mondays at 10pm EST. Check back here on 25YL for my in-depth episode analysis each week.