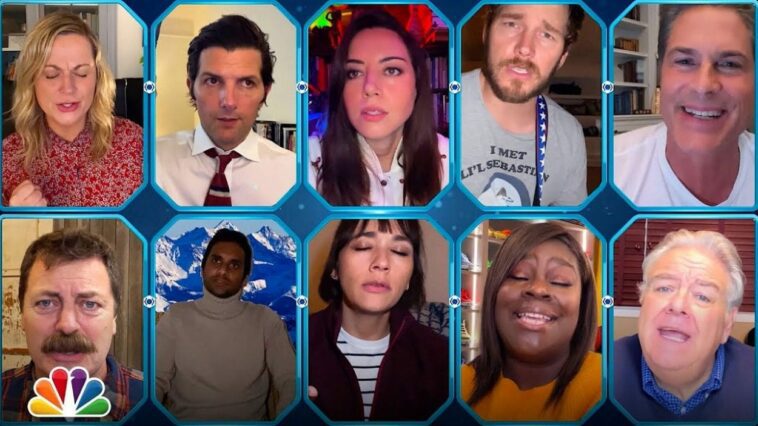 Welcome to What’s the Buzz, 25YL’s feature where members of our staff provide you with recommendations on a weekly basis. In our internet age, there is so much out there to think about watching, reading, listening to, etc., that it can be hard to separate the wheat from the chaff, filter out the noise, or find those diamonds in the rough. But have no fear! We’re here to help you do that thing I just described with three different metaphors. Each week a rotating cast of writers will offer their recommendations based on things they have discovered. They won’t always be new to the world, but they’ll be new to us, or we hope new to you. This week, Jill Watson is tearing up over the Parks and Recreation Special, Hawk Ripjaw is watching The Night Comes For Us, Jason Sheppard is listening to the updated Legends of the Fall soundtrack, and Vincent Greene recommends HBO’s The Outsider.

Oh, how I’ve missed Pawnee and her denizens. Since I frequently fall asleep with Parks and Recreation on the TV, I didn’t even know how much I missed them all. Since the series finale gave us so much closure, I never expected any follow-up.

Set in present COVID-19 time, the benefit special took on the look of the day: video calls. Using “Gryzzl” tech, Leslie Knope has a nightly phone tree with the gang. Even Bobby Newport showed up from his family’s fox hunting land in Switzerland.

As the original show’s characters demonstrated tropes of various office workers, the special took those tropes further and showed how each of them would behave under quarantine. Congressman Ben’s wearing his Letters to Cleo shirt and diving into his claymation/board game ventures, Ron’s ID and “Gryzzl points” are set to “unknown,” April is dressing herself from a trash bag, Andy is stuck in a shed and getting hungry, Donna is living large in a closet full of shoes, Tom is coming up with dumb inventions while pretending to be in Bali, Ann and Chris are social distancing in different parts of their house, and nobody wants to call Garry.

They didn’t stop at the core regulars. Local insane celebrity Joan Calamezzo shows up with a bunch of dolls, who are her friends. Dennis Feinstein’s been testing a miracle cure on animals and killing all of them. Perd Hapley hosts “Ya’ Heard? With Perd,” which is the show he’s currently hosting [sic]. Jeremy Jamm, DDS, sports a quarantine mohawk and a floral robe, while offering supplies for home dentistry. Jean-Ralphio Sapperstein…hasn’t changed, and is banned from Cameo. Tammy 2 even makes an appearance, and then chews through her ropes and might currently be fighting bears. We’ll never know for sure, unless this show comes back.

I have to say, by the time the gang group called Leslie, I was feeling pretty great. When Ron tearfully sang a few words of “Bye Bye, Little Sebastian,” I burst into tears of joy myself. Not just because I miss that little horse, whose Pop! Vinyl adorns my desk at my currently empty office, but because I thoroughly felt the love that still permeates the show. It’s clear this special was made to look after all of us during this pandemic, pulling for us as only Leslie Knope can.

Oh, and the beneficiary of the fundraising? Feeding America’s COVID-19 Response Fund. According to the website, State Farm, Subaru of America, NBCUniversal and the “Parks and Recreation” writers/producers/cast are matching donations made through May 21. All together, they will give up to $500,000 in matching donations.