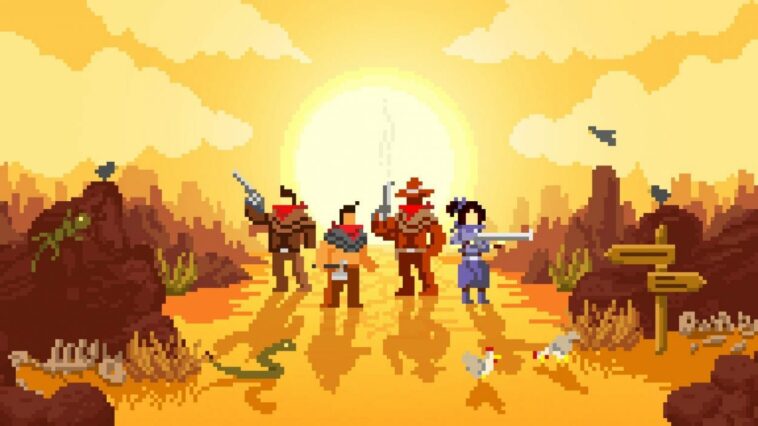 Many games claim to change depending on your choices. Some outright lie about it, like many of the Telltale titles (where certain events happen no matter what) and others hew pretty close to that statement (like Until Dawn, where you can get every character killed depending on your actions). It’s a tough thing to pull off right since it means developers have to be able to create an outcome for any action the player can consider. Enter Westerado: Double Barreled, an old school style Western game that sees players seeking revenge for the death of their family by investigating and exploring the Old West. It allows players to determine the outcome of the story via the quests they undertake, both changing the outcome while keeping the broad strokes of the story the same.

The game starts with you learning the rather stiff shooting controls. You can only shoot left or right, and with any gun, you must pull back the hammer before firing, and each shot must be manually loaded. It’s a somewhat primitive—but surprisingly effective—combat model. It forces you to consider your shots, although it’s rather easy once you get the hang of hitting bad guys while not getting hit yourself. Once your brother finishes showing you how to shoot, your family ranch is burnt down, and you must set out to find the lone man responsible for the death of your family.

From there, you are free to roam around the game’s decently sized world and explore to your heart’s content. You can chat it up with any character in the game, and in one of the many humorous moves the developers put in, you can pull your gun on and threaten anyone you want. Sometimes this will lead to a shootout, other times it might lead to extra information, and most of the time it leads to you just being a general jerk. You can even accuse anyone as well, which is endlessly amusing. But the end goal of all the running around and exploring is to get details on what the killer of your family looks like. This includes things like what size and color hat he’s wearing, his belt buckle, his pants, and more.

To find this information, you can undertake a shockingly huge number of quests, and you really only need to finish one quest line in order to get the info you need. The quests are terrific, too, ranging from helping a sheriff relive his glory days and redeem himself of his failures, to helping settle a dispute between an indigenous tribe and the military. Each story is, in and of itself, compelling and fun to see through to the end, with some surprising depth to the writing given the non-descript and heavily pixelated character designs. Even though the world is rather small once all is said and done, it feels rather vast since it’s packed with so many characters and stories.

Despite the primitive nature of its design, Westerado manages to let players indulge in classic Old West tropes. You can play cards, buy cool new clothes (including hats, which function as your life bar in this game), get new weapons, and even bounty hunt, which is a personal favorite of mine since it almost plays like a mini-mystery where you have to match up the character to their wanted poster. While Red Dead Redemption released five years before Westerado: Double Barreled, the latter still manages to really make you feel like a cowboy straight out of the movies.

This is fitting, too, since there’s an extremely well done Easter Egg regarding that very idea. Like many open world games, you can choose to go on a rampage, wiping out everyone in town, including the regular folk, bandits, the cops, prostitutes, and eventually a movie crew, where the director implores you to stop going off script. There are loads of small touches such as how if you kill enough bandits out in the wild, eventually you’ll become so feared that they run away instead of trying to fight you. These are all wonderful details that give the game real personality and charm.

The game manages to mix things up nicely, too, with a wildly varied landscape and tasks to complete. There are mountain ranges, mines, plenty of towns, military forts, and more. Depending on the quest line you choose to complete, you can do anything from defending caravans of buffalo (or goods) from bandits, rescuing people in danger, and sometimes talking your way out of bad situations. All the while, the game’s script is heavy on accents and speech quirks, giving it an air of authenticity.

The overall story is relatively simple, but it pulls the rug out from under the player on their first playthrough. I’m going to try and discuss the ending in broad strokes, but I will be venturing into spoiler-ish territory here. As mentioned above, you can complete a number of different quests in order to figure out who the killer is, and while the ending sequence is always the same, with you confronting the killer and his gang, the game directly ties the outcome in to whatever the first quest line you finished in a playthrough was. It’s a really neat twist that feels like it’s straight out of a classic Western movie, which often depict morally bankrupt characters willing to do anything to fulfill their own end goals. Even though the overall plot is the same each time, it’s really neat to see that the developers have given players the chance to affect the outcome in a unique way.

So even though the game is short, with my first playthrough taking me about two and a half hours, it offers tremendous bang for your buck due to just how replayable the whole thing is. Not only are there all the aforementioned quests and secrets to find, with a whopping 79 achievements being helpful in keeping track of what you have and have not done, but there are three unlockable characters, all of whom offer different play styles, and therefor unique challenges. This includes a character who can’t wear hats, meaning they die in one hit, and another that starts with the shotgun (my least favorite weapon in the game due to how risky it is). There is even a hard mode where, once you die, that’s the end of the journey. It’s a shockingly dense game that doesn’t take up too much time.

I guess that’s where the game’s ultimate appeal lies. Even though I don’t have a ton of hours in the game, I still recall a lot about it despite not having played it for a few years now. It offers players a wide, wild version of the Old West to explore, and leaves them in charge of their own journey in a way many games claim to do but often lie about. Despite the somewhat clunky combat and primitive graphics, it really does feel like you’re playing a Western where you are the star. Developers Ostich Banditos have crafted an open ended, insanely replayable and memorable adventure that gives players the chance to tell their own story in a world just begging to be explored. It is, for my money, the best Western themed game that I’ve played, which is a weirdly underrepresented subgenre in gaming. Sure, other titles, like the ever- popular Red Dead Redemption series offer a much more grounded and realistic take on the setting, but Westerado: Double Barreled offers a deep, dense world that manages to stick with you despite its primitive graphics and strict gunplay mechanics. So far, I’ve yet to hear if Ostrich Banditos are working on anything else, but I would love some kind of follow up or sequel. The game is a testament to how pure creativity and good writing can make something better than it has any right to be.

Westerado: Double Barreled is available on Xbox One and Steam. This review is based on the Steam version.