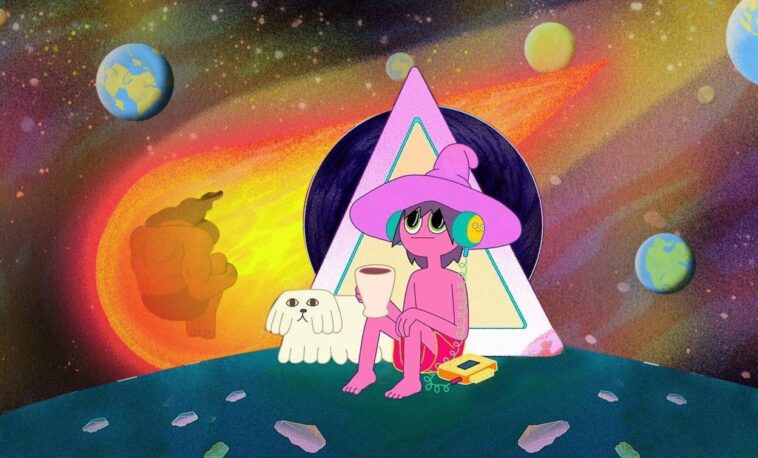 Trippy doesn’t even begin to describe Netflix’s The Midnight Gospel, the latest series from Pendleton Ward, the creator of Cartoon Network’s Adventure Time, and comedian Duncan Trussel. The series tells the story of Clancy Gilroy, a twentysomething from Earth who lives in The Chromatic Ribbon, a dimension void of physics. Clancy uses his computer to travel to other worlds throughout the universe interviewing members of the planet for his spacecast, which is the show’s title.

An interesting aspect of this show is that unlike other animated shows, each episode is based on an interview from Duncan Tressel’s podcast, The Duncan Trussell Family Hour which is usually about a bevy of topics. However, most of the ones selected for this show revolve around spirituality, meditation, psychedelics, and death. The first few episodes revolve mostly around Clancy doing his spacecast and his adventures on the individual worlds he visits. In the pilot, he comes to Earth at a time semi-reminiscent to our current situation, during a zombie apocalypse in a country being led by a tiny but incompetent president, voiced by Drew Pinsky.

Clancy and the Tiny President talk about whether there is such as thing as a good or bad drug, based on the angry mob of protestors outside of the White House. As the episode goes on, the story of the zombie apocalypse and the conversation Clancy and the Tiny President are having merge into one when Clancy, the tiny president, and a pregnant woman they saved are made into zombies. They realize that the zombies are actually peaceful and just trying to sing, without harming anyone. The problem is that so many non-zombies find there is something wrong with the zombies and are aimlessly trying to ‘save’ those who have been converted. At the end of the first episode, the planet explodes just as Clancy is sent back to his home. 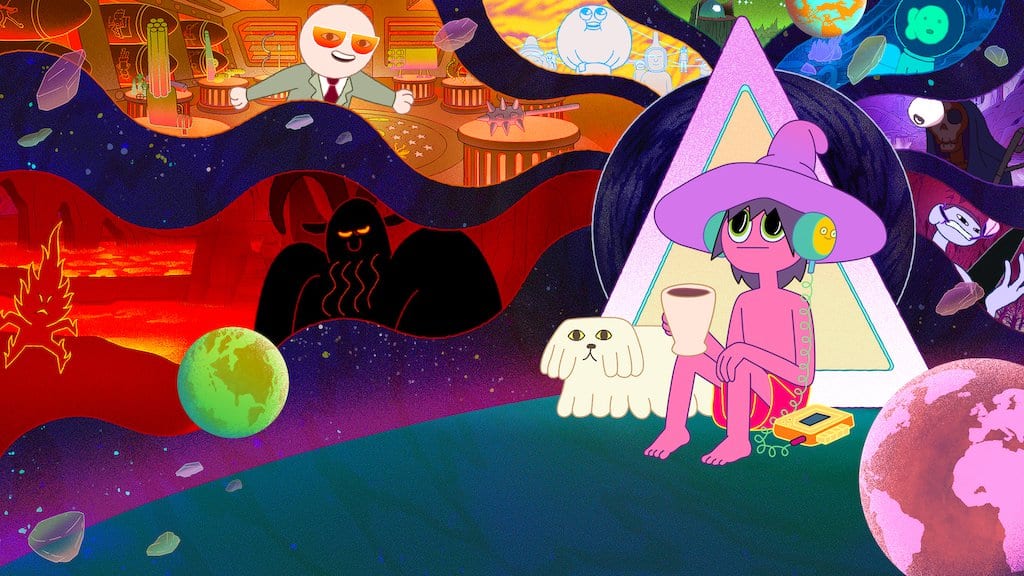 The Midnight Gospel is a great series because of the vibrant animation coupled with the stimulating conversation. In this format, the show becomes a beacon for uncommon subjects to find their way into the public zeitgeist as well as have a way to give people a way to have a visual metaphor for the conversation. I’ll admit, the show is grounds for rewatching because you feel like you might have missed something the first time around. This isn’t to say the topics Trussel and his guest talk about are always interesting to hear about. While the show is based on Trussel’s podcast, it’s not without standard plots, though these usually take a backseat to allow Clancy to record his spacecast. Though he is usually seen wearing a red tunic and a purple witches hat, Clancy actually changes his appearance for every world he visits. In the pilot, he becomes a muscle-bound giant while in another episode, he is seen as an octopus sheriff.

The first four episodes of the season follow this pattern of Clancy working on his spacecast. However, certain details from his home life inhibit his ability to garner interviews for The Midnight Gospel. The first of these comes from the sixth episode “Vulture with Honor.” Clancy’s computer, which has been reporting error problems to him since the start of the series, is steaming and refuses to load any worlds for Clancy to explore. The episode instead takes place in The Chromatic Ribbon with the interview for his spacecast not even being a primary plot point. He talks with the captain of a company that specializes in simulator repair. They look for a special green oil that has to be rubbed on the simulator.

After getting the simulator to not explode, the simulator forces Clancy to get some perspective on life and sends him to talk with David, voiced by David Nichtern. They talk about meditation and how clearing your mind is not the goal; rather mediation is meant to show that learning to see what’s around you is more important. Following this, Clancy returns home enlightened from his adventures, something he looks to add to the next episode of his spacecast.

Episode 7, “Turtles of the Eclipse” has Clancy talking with Death on a planet that has a single water slide, but no water. He finds Death in his bag and talks with it about what’s wrong with the institutionalization of death and dying in America. As Clancy almost dies several times in the episode, Death comforts him by saying he will die in a swivel chair. Seeing this as a sign of what could happen, upon his return home, he throws away his swivel chair and stops being enlightened.

Initially, the idea of family seems to be the last thing on Clancy’s mind—since he doesn’t want to talk with his sister—but instead is something he consistently tries to forget since his mother died. The final episode of the first season is based on a conversation that Trussel had with his mother Deenen Fendig prior to her 2013 death from cancer. The episode talks about the nature of death, but also about how Fendig learned about dying. The animation for this episode features Clancy going from a baby to an old man while watching his mother age to an old woman and grow up again. The episode touches a nerve as Clancy gets to talk with his mother about dying and tells her about all the things going on in his life. It’s the biggest wish for people who lose a parent or loved on. Being able to say everything you wanted to but never got the chance to, as well as being able to have just a little more time with them.

Clancy talks with his mother about the end of life, and how she has seen people deal with it, as Fendig was a clinical therapist. The final moments of their conversation feature Clancy and his mother as planets being damaged by a black hole, but she is destroyed in it as Clancy watches her. It’s a heartbreaking moment to watch someone you love perish all over again, even if you got the last moment you wanted. However, that’s the problem with the last moment, it’s never as long as you would like it to last. 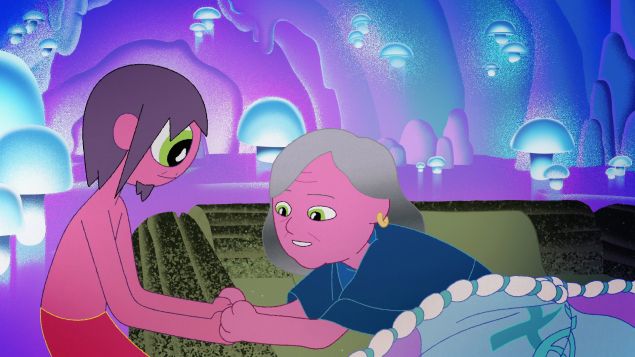 While all this has been happening, police officers who discovered Clancy has been using the simulator for illegal purposes surround him. In an effort to save him, Charlotte, a dog he rescued from the pilot episode, pushes him into the simulator before it explodes from steaming again. Clancy is picked up by a bus of people from the prior episodes of the series and is last seen riding away as he asks one of the passengers to do an interview for his spacecast.

Pendleton Ward’s use of pastel colors and light colors juxtaposing with the deep conversations makes this show quite the watch. A few times darker colors enter the show is when something bad is going to happen or during the final scenes between Clancy and his mother. Since the show relies on a non-traditional plot structure for the episodes The Midnight Gospel, Ward’s animation style is something to admire because it is based on a minimal amount of voice over, not on a script or storyline of any kind. Designing the strange worlds and characters for Clancy, sometimes mistakenly called Duncan, brings a sense of comforting whimsy to an otherwise odd show.

The show has yet to be renewed for a second season but it’ll be interesting to see where the show goes from here if it is. In the words of one of the passengers on the bus in the final episode, “just be here now.” 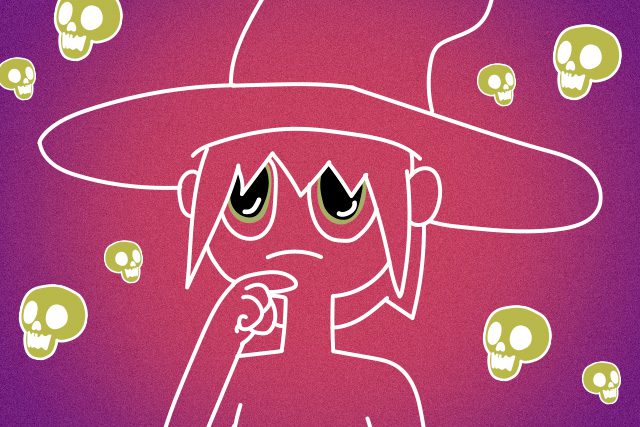 I live in a pocket of New York's Finger Lakes Region called Ithaca. I am a reporter for the Ithaca Times and an avid player of Pokemon Go when I'm not out reporting. I have an affinity for sitcoms and love to laugh out loud, even when a show is pretty bad. Cause sometimes, you just gotta laugh.