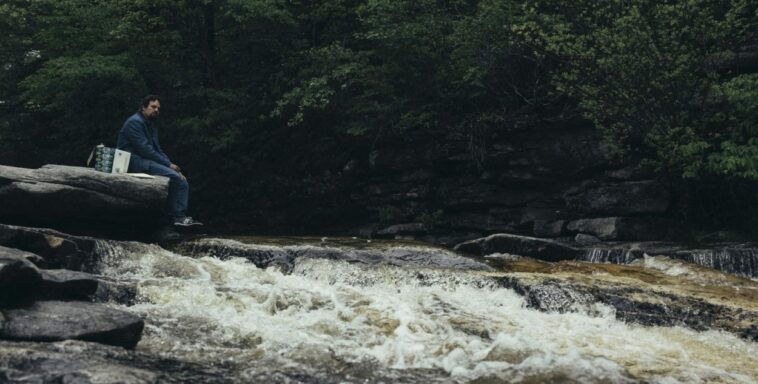 The end of I Know This Much is True S1E3 reveals Dominick’s plan to commemorate Angela’s death: he got a vasectomy.

Dessa returns from the trip she went on alone, and it’s clear they missed each other. They end up having sex, and it’s after that when Dominick tells her. She doesn’t have to worry. She won’t get pregnant. He got snipped.

It seems pretty clear that he thought they were on the same page. The loss of their baby daughter is something so unbearable to Dominick that he can’t imagine taking the same risk again. Or he feels like having another child would be disrespectful to the memory of the one they lost, as his monologues in S1E2 implied he felt like those who were suggesting they have another baby were treating Angela like a replaceable object.

Of course she’s not, and no one would say so—even those who told Dessa and Dominick to have another child. But that’s how he sees it. Dessa, it turns out…not so much. She wanted another baby and rails against him for what he’s done. Whatever I Know This Much Is True might provide after this moment, I don’t need anything else to explain their divorce.

It’s not that Dessa thinks a new baby could replace the one who’s died; it’s about how one takes that loss in relation to the future. Dominick is sort of cutting that off. There is no future, at least not in this way.

I guess I am going to keep obliquely referring to people in my life in these pieces, and I hope everyone feels their privacy is respected. Because I have a touchstone here, too, that bears a stark resemblance to what Dominick and Dessa go through. It’s a story of an infant girl—the couple’s first baby—dying. How do you deal with the fact that your baby girl has died? Things might fall apart as they do with Dominick and Dessa, or maybe you find a way to push forward together. Maybe you have two more daughters together. I don’t know that the couple I’m thinking about has ever truly gotten over the death of their first daughter—one expects not, when it comes down to it—but it didn’t wreck their relationship.

That it does in I Know This Much Is True is eminently plausible, however. For what it’s worth, I think I would be more like Dominick than Dessa here. It may be possible to move past such a thing, but it’s a hard ask. I don’t know how my aunt and uncle did it. I don’t know how they managed it in a way where I look at them and see an exemplary couple. I guess they were on the same page, or got there, where Dessa and Dominick clearly were not.

Retroactively this explains how Dominick reacts when Joy tells him she is pregnant. He might come off as a dick in that scene, but once we know he’s had a vasectomy, well…only a couple of things are possible. One is that he is not the father. The other is that the vasectomy failed or reversed itself, which is something that can happen, as I understand it.

I don’t know if it actually matters that much, though, which of these is the case. It does, obviously, because one possibility is that his girlfriend cheated on him, but the other possibility isn’t much better given that Dominick seems to have explicitly decided not to have more children after Angela died.

He didn’t just decide not to have another kid with Dessa; he decided he didn’t want more children at all. Apparently he has never told Joy about any of this, so you can put that right next to everything else in the box of their relationship being doomed.

Dominick gets to see Thomas in I Know This Much Is True S1E3, and it is a bit of a hard scene. The latter has been suffering in Hatch, of course, but the deeper thing cuts through their relationship. Dominick and Sheffer, who’s now on their side, are trying to prep Thomas for his hearing, but it doesn’t go very well. Dominick’s frustration comes out. He just wants his brother to be rational about this, but Thomas can’t quite do it.

Why did he cut his hand off? Thomas starts going into things about God and how his sacrifice could have forestalled the Gulf War if only…and I don’t know for sure if Dominick is sympathetic to that, but it’s clear that he knows this isn’t going to fly.

You gotta calm down, man. You’ve gotta give them reasons they can work with. When they ask if you regret cutting your hand off, you say, “Yes.” We’ve gotta get you out of here, brother. That’s the most important thing.

And of course Thomas knows that is the important thing. He hates being in Hatch. He claims there was a beetle in his rice and beans. As Sheffer notes, he is actually being watched all of the time. This is not a place for a paranoid schizophrenic.

But the explanation that Dominick shuts down is also Thomas’s truth. That’s one of the difficulties when it comes to a severe mental illness like this: how do you communicate in a way that neither feeds into the delusion nor threatens the fragile world-building that it represents? Is Dominick right to try to give it to him straight, or would it be better to play along and try to work from within Thomas’s delusional understanding?

I’m not sure. Dominick is certainly right that some kind of story about sacrificing his hand for World Peace is not going to be helpful at the hearing, but the way he pushes also seems to lead to the way Thomas breaks down crying.

And then Dominick hugs him. This is the difficulty of having a mentally ill brother that forms the center of I Know This Much Is True: Dominick always wants to help, but knowing how to help someone like Thomas is far from the easiest thing.

Sheffer tells Dominick that Settle is closing down, so while she now agrees that they need to get Thomas out of Hatch, she also raises the question of where he should go. Dominick says he’ll take him in, but Sheffer is not wrong to point out that he needs to think about what he’d be getting himself into there. As much as he loves Thomas, the latter really does probably need to be in a facility, and various moments make clear that Dominick doesn’t necessarily know how to take care of his brother, as much as he wants to.

In flashbacks, Ma gives the boys (played by Philip Ettinger at this age) a typewriter. They go off to college. Maybe this is about avoiding Vietnam. But Thomas doesn’t do much of anything; he just lies in bed.

Dominick meets Dessa at the bar where she works one night. Thomas wants to know what sex is like and his eyes fill up with fascination as Dominick tries to explain before suggesting he go find a girl and learn for himself.

One night, Dominick comes back to the dorm room to discover that Thomas has attacked the typewriter. It is apparently not destroyed to an extent that would make it unusable, but Thomas has freaked out. He asks his brother to type his paper for him. He can’t because his hands won’t stop shaking. And in narration, Dominick tells us that the contents of that paper disturbed him even more than what Thomas had done.

This was the beginning, it would seem, of Thomas’s psychosis. Or, not the beginning—who knows what that might be—but when things started coming to a head. He mentions how Dominick had wanted to live in separate dorm rooms and questions why he hasn’t been around. This is almost certainly unfair, but it just as certainly feeds into the guilt that Dominick feels about what has happened with his brother.

He insists that it is genetic, and maybe it is, but the fact that they are identical twins has to complicate that position. We don’t really understand the aetiology of schizophrenia and the like. But it can’t just be in the genes if your identical twin suffers and you don’t. Maybe it is epigenetic. Maybe there are predispositions triggered by environmental factors. Maybe Thomas was telling the truth about their stepfather raping him with a screwdriver…

The more difficult thing may be the extent to which it doesn’t really seem to matter when it comes to treatment. Theories about causes seem to be of almost a purely academic interest. Perhaps that will change at some point, but as it stands, this is not like treating a bacterial infection.

So where does that leave Dominick? In these flashbacks—to the college days and also their time as third graders—I see both latent guilt and resentment. It would be unfair to say that Dominick caused, or even problematically fed into, his brother’s psychosis, but surely that gnaws at the back of his mind. And as much as he cares for his brother, he resents how he has had to care for him throughout their lives. And then surely feels some guilt about that resentment.

What happened to Penny Drinkwater? Thomas liked her, but Dominick didn’t because he thought she was a liar. So he lied to punish her, and she got suspended. Then she died. This mystery seems a bit tangential to the thrust of I Know This Much Is True, but the adult Ralph Drinkwater seems to hold something against Dominick from what we see of them interacting at Hatch. Does he blame him for his twin sister’s death in some way? Is he maybe right to? Or does he just know that Dominick lied to get her in trouble back when they were kids?

I Know This Much Is True

So here are the questions that I Know This Much Is True S1E3 leaves us with:

The big one is thematic, about what will happen to Thomas, and what should happen to him given that he is a schizophrenic who cut his hand off. Will he get out of Hatch? Should he? And if so where should he go? Settle shutting down in 1990 plays on the historical reality of deinstitutionalization, with the mentally ill increasingly left to be cared for by family, in private hospitals, or prisons in the wake of these policy moves in the 1980s and 1990s in the U.S. That’s not to mention those who became homeless. So that raises a background question worth thinking about.

In terms of Dominick’s life (which is, really, the primary focus of I Know This Much Is True), there is the question of who his biological father is, whether he is the father of Joy’s baby, and whether his actions played some role in Penny Drinkwater’s death. Beyond that, one must continue to wonder whether we will see Nedra again and what happened with that manuscript.

Oh, and he’s crashed into a tree. But I’m sure he’s fine, right?

I Know This Much is True