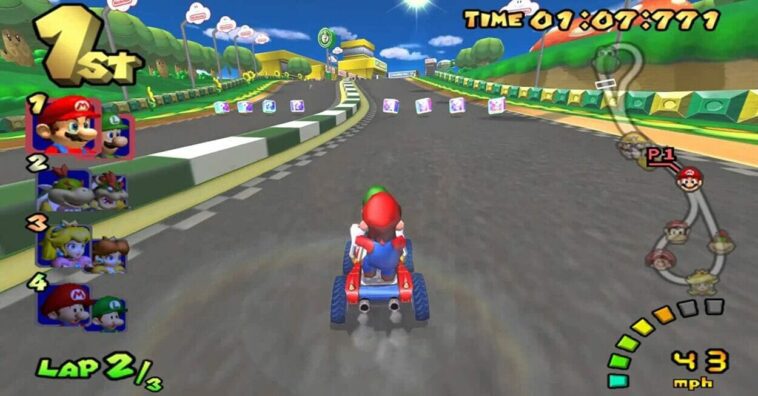 When I was little, a relative of mine had a Nintendo console from the 1980s with four games–a wrestling game (with Hulk Hogan and André the Giant in it), Pac-Man, Duck Hunt and of course, Super Mario Bros. I believe it was the game released in 1985, and it was my first introduction to Mario. I loved it instantly. The game was like one big adventure, at least for me, and it offered a fun escape, as well as something my brother and I could play simultaneously as it offered Mario and Luigi in multiplayer mode. 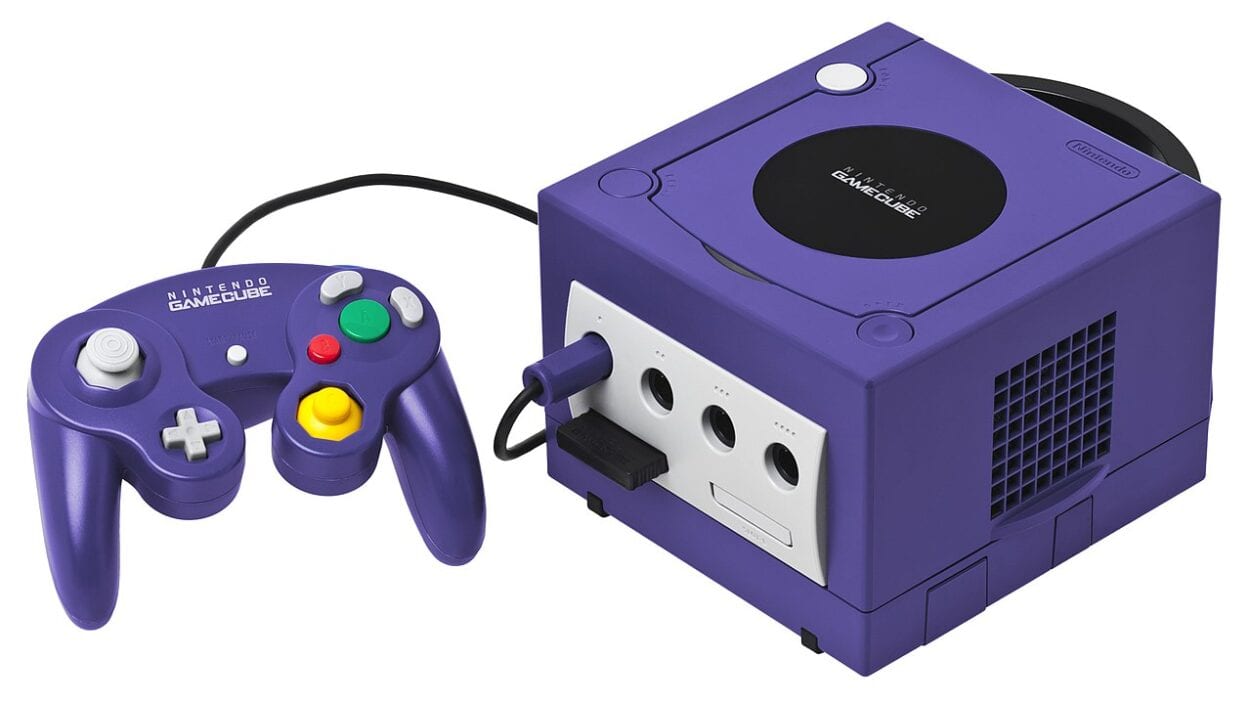 When my brother received his GameCube in the early 2000s, one of the first games he had was Mario Kart: Double Dash. Mario in racing format was the perfect game for me. One of the first things I remember ever wanting to become was a race car driver, and any game involving cars, especially racing, was cathartic. Racing games have always been, and probably always will be, my favorite genre of videogames. Admittedly I’m not a major gamer, but I’ve tried extending my horizons over the years. Luckily, I have a couple family members who are dedicated gamers that have introduced me to the likes of Mortal Kombat and Halo. After a few tries with those games, I’m definitely better with cars.

One of my favorite memories is spending hours playing Mario Kart in my childhood home. My favorite tracks to race were “DK Mountain”, “Peach Beach”, “Daisy Cruiser”, “Sherbet Land”, and “Mushroom City.” From the mountains to the beach to a cruise ship to icy conditions and the downtown center of a city, the game did not disappoint in its range of racing locations. I usually played as Mario or Peach. It was fun to play with my brother, because in multiplayer mode we could be on the same team, switching positions so one player was driving and the other was throwing things at the other racers. In a way, it taught us teamwork. 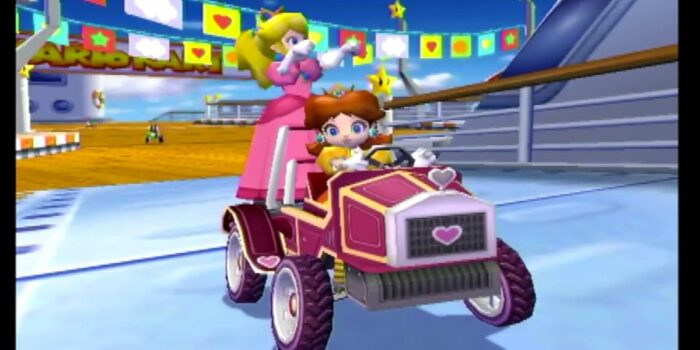 Throwing things that could send your opponent reeling into the ocean or into another racer may be brutal, but it’s meant to be fun and lighthearted. It’s like a cartoon–no matter how many times the Coyote is blown up, beaten, or seemingly killed, he keeps coming back and the Roadrunner keeps tormenting him and getting away.

Mario Kart made players the Roadrunner, and the opponents, though operated by the game’s computer, the Coyote who just always got the bad end of the stick. Occasionally those other racers would get in a few good hits, but the more you played, the better you became and the more skills you built. As a result, you won more races and unlocked more stuff. It taught you to have fun in an imaginative way, and it taught you to overcome challenges, to never give up, to work hard for your goal, and of course, teamwork.

Anyone else remember that ultimate satisfaction of hitting the guy ahead of you with one of those green shells? Unlike the red shells, they don’t target lock and aim for you. The green shells required more skill. Sometimes you hit them with perfect aim, and sometimes they, or someone behind you, got hit by pure luck. That was also pretty awesome. The thing that sucked was when you’d throw it and it’d come back for you–the fastest payment of karma I’ve ever seen.

Even though videogames are obviously not real, isn’t it funny how you create mortal enemies while playing them? Mine was Yoshi. No matter how many games I played (trust me, there were many, many games over the years), it’s like that character always had it out for me. Sending me off cliffsides, hitting me with everything he had in his arsenal, or just passing me to show me up, mostly without instigation, was annoying. I got a little too invested in this ongoing feud from time to time, sending him over cliffs or into buses before he got the chance to do the same to me. Yoshi is my one and only mortal enemy I’ve ever had, and to this day, it remains the same. Whenever I return to play Mario Kart from time to time, his mission is to ensure I don’t win–which makes it all the more satisfactory and fulfilling when I do, especially if it’s on Yoshi’s own course.

A few years later, my brother and I each received a Nintendo DS. Naturally, one of my first games for the system was Mario Kart DS. This was the first gaming console I ever owned that was 100% mine, so I was exposed to more games and had more time to play them.

It was the perfect carry-on anytime we had to fly or drive somewhere. Time passed by fast, and it was fun to connect with other DS owners and play games, or just send messages via Pictochat–that was texting before texting was a thing. You could use the stylus to draw or to help you type out words faster. 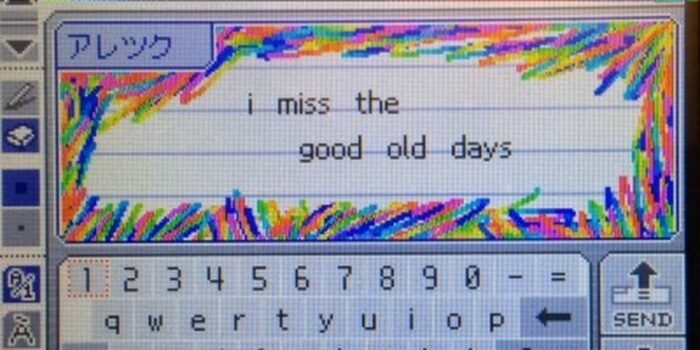 One of the things I loved about the DS version of Mario Kart was that, since the DS had two screens, you could see where you were going, but you could also track your position and get a heads-up if any player was planning to throw something at you, allowing for you to possibly avoid it and maintain your place in the race.

It wasn’t until Mario Kart DS that I started playing in Time Trials and Battle, and I found myself loving Battle almost as much as Grand Prix itself. If I ever got tired of one or the other, I’d just switch between the two. I played a lot of games on my DS, but Mario Kart has always been in my top three. It’s amazing I haven’t worn it down after more than a decade of playing it.

“Cheep Cheep Beach”, “Luigi’s Mansion”, “Delfino Square”, “Waluigi Pinball”, “Tick-Tock Clock”, “Peach Gardens” and “Airship Fortress” are some of my favorite courses in this particular game. I loved seeing so many new options in this game–it was still Mario Kart, but with more characters (like Dry Bones) and courses that differed in a good way from the GameCube version. It was like a continuation of races, allowing Mario Kart racers to not feel bored or limited. Each game, in my humble opinion, seemed to level up from its predecessor.

Upon receiving the Wii for Christmas, Mario Kart Wii came with the awesome present, as did the Wii Wheels. I don’t know about you, but I’ve always had a tendency to use the controller as an actual steering wheel whenever I played a game involving cars. It’s done kind of subconsciously, though the GameCube or Xbox controller is no steering wheel. That’s why the steering wheel for the Wii was so cool; it made sense, and I think it made me a better racer. Plus, I didn’t look so ridiculous.

I loved the new courses, and I loved being able to race with bikes. The day I figured out that popping a wheelie on the bike accelerated your speed was a momentous occasion. That’s one of the things I love about exploring a new game–figuring out the tricks and shortcuts that come with it, or just simply developing my own. 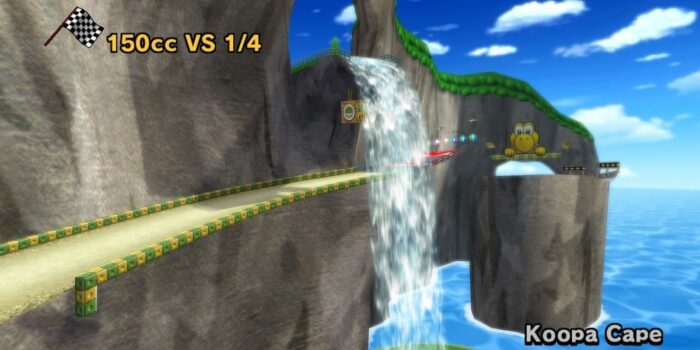 I loved seeing familiar tracks from Mario Kart courses past, but seeing the new additions, as always, was exciting. “Koopa Cape” is probably one of my favorite courses of all time; I just find it fun and unique. “Maple Treeway”, “Coconut Mall” and “Mushroom Gorge” are among my favorites for the same reasons.

I played it nonstop for a while, but had a hiatus that lasted a few years, partially because I moved away for college. I went with a friend of mine to our other friend’s family’s house for Thanksgiving when I was in my sophomore year of college, and we spent the entire day hanging out there. I was thrilled to discover they had a Wii, and Mario Kart, in their basement. We played an array of games, including Mario Kart, and I remember how much fun I had playing with them and spending the day there. It made any homesickness I had disappear and I just got to have fun and enjoy the moment. Mario Kart obviously holds a lot of special memories for me because of the people I got to play with and all the fun we had.

I haven’t played every version of Mario Kart, but it’s on my bucket list. These three games are the ones I played in succession. Each of them made me a better gamer in their own ways. They also helped me realize my race car driver dream and gave me good memories. Mario Kart continues providing those happy memories, as they will for years to come. Although if the games could get rid of that much-dreaded “Rainbow Road” course, I’d certainly appreciate it.

Gaming offers a kind of escapism that television, films and music don’t have—you get to be a part of the game. You control what happens depending on the game, and your hard work pays off as you get to unlock levels, characters, and the like. You get to be so invested that anything hanging over your head or otherwise bothering you fades away and for that level, whether it takes five minutes or five hours–you feel free.

Most importantly, gaming is about connection. Connection to the game, the characters, but most significantly, the people you play with. Whether you’re in the same room or playing over wifi from a great distance, you create good times and good memories—as long as you don’t get too competitive.