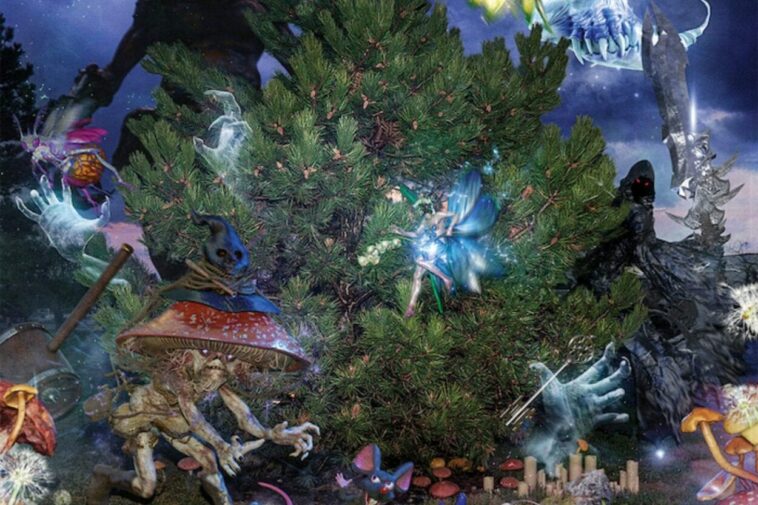 Easily one of the most polarising acts in today’s music scene, experimental bubblegum bass duo 100 gecs have raised their profile considerably in the past year. Having embraced collaborations like no one else, with Dylan Brady’s uniquely crushing breakdown production turning up all over the place in the wake of their 2019 debut album 1000 Gecs. With such a profile, and in such a climate, a full album of remixes—titled 1000 Gecs and the Tree of Clues and running almost an hour—of the songs from 1000 Gecs seems like a natural progression.

This is especially the case given how terrific the recent remixes released as teasers had been. The “ringtone” remix released as the lead single to this project is high in the running for my favourite single of the whole year. Nothing better expresses the unique position of 100 gecs in the musical landscape than the fact they would have, and could get, Charli XCX, Kero Kero Bonito and Rico Nasty together on one song, and have the instrumental—a pre-existing instrumental at that—sound equally suitable for each of them.

Charli lends a plucky, coy and playful rendition of the original chorus; Rico gives us a verse and chorus of her own with her chaotic evil delivery on full, effortless force; and Sarah Bonito provides possibly the most nuts moment on the track, abruptly side shifting from peppy and cute to bizarrely threatening in an instant. It’s a magnificent posse cut with phenomenal chemistry and every artist earning full marks for originality and personality.

“Gec 2 U”, featuring Dorian Electra is another typically demented piece of queercore, in which melodrama, eroticism and humour are rendered together in the smoky vats of Brady’s production, envisioning Dorian playing a kind of phone sex operator who literally seems to be dying waiting for your call. It’s a lurid piece ripped from a temperamental adolescence of flip phones and dial-up internet.

The album proper introduces itself with a comparatively slow burn in the form of A.G. Cook’s remix of “money machine”, hardly a mild track itself but here given a long introduction, sounding for the most part like a cleaner, yet hardly touched, version of the original. It certainly takes a while for it to really feel as if Cook has left their stamp on the track; it really makes the listener wait for the breakdown, although it still hits hard when it arrives.

Probably the most unlikely collaboration on the album arrives in the form of “hand crushed by a mallet”, which has been remixed here by Fall Out Boy, Craig Owens and Nicole Dollenganger, given a bombastic rock-God swagger, broken up by a delicious passage from Dollenganger and topped by a sweltering metal outro.

Another unlikely moment—although expect the unexpected when you’re dealing with a gec—comes with “xXXi_wud_nvrstop_UXXx” with Estonian rapper Tommy Cash and British synth pop songstress Hannah Diamond, who present their version of a Pitbull club anthem, with Cash paying lyrical homage to the great man himself over a set of pulsating techno rhythms. I’ve never been a big fan of Diamond—she still to this day sounds like a Sarah Bonito impersonator to me—but her vocals here are terrific, sounding a lot more conventional delivering a hugely danceable hook.

The point where the hysterical laughter truly sets in though surely has to be “stupid horse”, here dispensing with the hilarious ska backed storytelling of the original track for an endless stream of nonsense animal puns from GFOTY. The original line is “stupid horse, I just fell out of the Porsche” because Porsches have a horse as their logo, but here, she’s just naming random animals and modes of transport that barely even rhyme! Trust me when I say that this song will break you.

Many of the tracks here are remixed more than once, and two of the biggest highlights are the separate remixes of “745 sticky”, one a maudlin, wheezing and honking piece of carnivalesque courtesy of American experimental hip-hip trio Injury Reserve, the other an absolutely bone-shattering electro-industrial piece from now sadly defunct noise pop duo Black Dresses. The latter is the most hardcore, explosive thing I’ve heard all year, including on Black Dresses’ recent album Peaceful as Hell.

The project concludes with a handful of solo gec tracks, either live versions or new material. “came into my show” kicks off with an intro that sounds like the title music to a kindergartener’s show about fairies, before transitioning into an adorable expression of gratitude to their audience with the kind of heart-warming you only get from a punk. The “small pipe” interlude matches the innocent tone of that intro, and “toothless” is another sweet moment of euphoric delirium, topped off with another of Brady’s ear-clearing breakdowns. The album then closes with a live performance of “800db cloud” that almost matches the Black Dresses track for crushing intensity.

There are maybe a couple of remixes here that do just sort of meet the bar rather than exceed it. “gecgecgec” is a bit of a jarring transition coming off the back of the Black Dresses track, given that it opens with easily the most conventional rap verse on the album from Lil West. However, in the main, this album is one of the most eclectic, yet holistic listens a fan could ask for. Dylan Brady and Laura Les and their like-minded collaborators’ unique brand of distorted, synthetic madness certainly won’t be for everyone, but that is 100% the point.