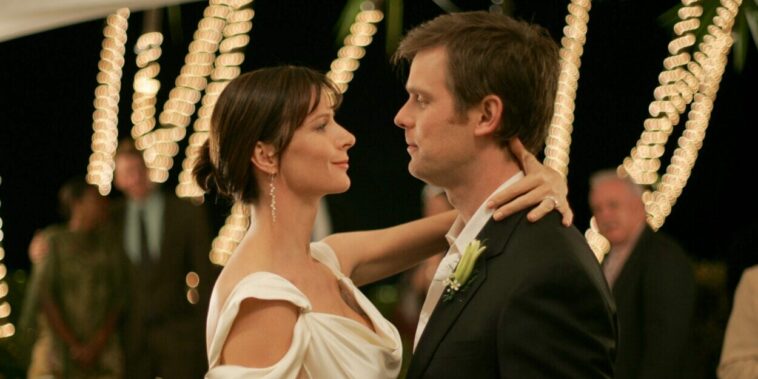 Six Feet Under’s Nate Fisher’s story arc was tragic, no doubt about it. Yet looking at it in hindsight, it seems so painfully obvious, almost to the point of being right in our faces. Nate told us exactly who he was in the show’s pilot episode: a runner, both literally and figuratively. Once he stopped running, faced his problems head on and took that giant step forward, he died. How tragic is that? In this essay, I’ll be looking at all aspects of Nate Fisher. What was he running from? What progress did he make in his life? Why was he so tragically flawed yet so incredibly compelling?

Growing up surrounded by death, with parents who didn’t know how to express or convey emotion, would have an impact on anyone. Nate’s father, Nathaniel Sr., as we would learn throughout the series, came home from Vietnam emotionally shut down. He worked, he took care of his family, and to those not in his immediate family, he was a charming and quirky, older, pot-smoking man.

To those in his family, he had walls up. He couldn’t be vulnerable or drop his guard around those closest to him. The risk was too high. Whatever happened to him overseas would stay with him, buried deep inside. Nate’s mother, Ruth, was a frustrated caregiver. All she knew was to tend to everyone else’s needs to the point of it being an obsession, thus driving those closest to her away. Nate didn’t want either of their lives and he certainly didn’t want to be surrounded by death. Never learning how to cope, he ran in hopes of creating a life far removed from the way he grew up.

His father never expressed any sense of pride in Nate or any kind of approval of his son and his decisions while he was alive, although he would appear to Nate after his death and tell him these things. Whether that was actually Nathaniel Sr. or a projection of Nate’s desires is unclear and a debatable point, but regardless, that lack of approval from his father would also make a profound impact on Nate. He spent his adult life wanting to make people happy, desperate for approval so he could find a sense of validation.

Throughout the series, Nate would be in two romantic relationships. First was Brenda. That relationship started off in a manner in which we can assume many of Nate’s relationships started, casual sex. Nate was intrigued by this woman who was so guarded and mysterious, so sexually uninhibited and completely emotionally unavailable to him. In the first two seasons of the show, Nate seemed happiest when the relationship was either completely focused on sex or when Brenda was emotionally vulnerable and he felt that he was in a position to be needed.

As Nate learned of his own health problems, he couldn’t bring himself to confide in Brenda. He didn’t know how to. He wanted to run from the problem and be there for Brenda during her bout with depression. He wanted her to tell him that she needed him, that he was vital to her mental health improving, and to validate him in the process. The problem is that Brenda would never do these things, and the divide between the two of them grew as they both suffered in silence, pretending to be in a partnership yet operating as if they were completely on their own.

The introduction of Lisa into the series and Nate’s life was the show’s way of telling Nate, “Be careful what you wish for because you just might get it.” Lisa wanted Nate to be the center of her world. All of Nate’s desires to be needed and validated would’ve and could’ve been met by Lisa. Everything he sought and desired was right there in front of him, yet it didn’t fix him. He still wanted to run, but at the same time, he wanted to please her, thus making him internally miserable. This was case in point that another person can’t make anyone whole. We have to be OK with ourselves, and that validation comes from one’s self. This experience with Lisa was one in which Nate’s world was turned on its head. He thought he had what he wanted, yet he was still miserable. 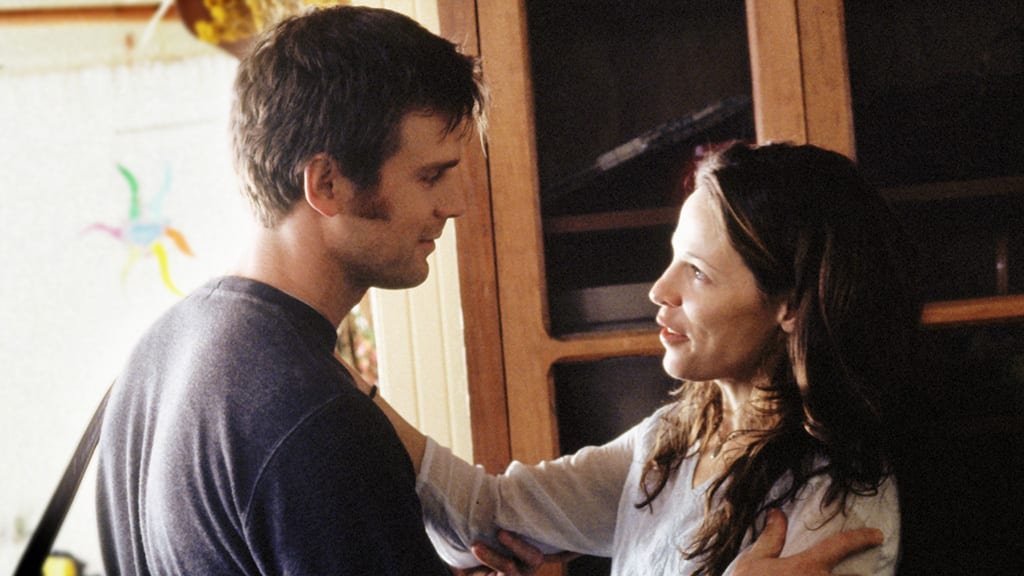 What makes the story with Lisa even more tragic is that Nate was starting to make progress in his relationship with Lisa, albeit not the most healthy of progress. His desire to run was starting to vanish. He was beginning to love her as more than just the mother of his child. While that was indeed a positive step forward, what Nate was doing was recreating his parents’ relationship. Marrying the woman you impregnated without being truly invested, but feeling like it’s the right thing to do. Finding ways to keep yourself sane when you’re not home, so you can go home and be the man you think they need. It’s a form of love, yes, but love with a personal cost that ultimately isn’t fair to anyone.

Then fate intervened and Lisa’s life was tragically cut short. Lisa’s death, and Nate’s reaction to it, defines the final two seasons of the show. Nate is in a crisis of sorts, as he thought he was finally making strides in his life and now that’s been completely yanked out from underneath him. He’d been offered validation in the form of a woman who had a lot in common with his mother, and it didn’t fix him the way he previously expected it to. We’re left to watch the free fall.

Of course, part of Nate’s repeating behavior was to go back to what was familiar, what felt comfortable to him, and that was Brenda. When Nate and Brenda were first together, they were in very similar places in life in terms of neither of them being able to truly commit. Granted, their issues looked completely different, but the underlying problem for each is that they simply weren’t ready to fully give of themselves to another human being. What made their second attempt at being together even more tragic is that while Nate had been off trying to figure out what he needed with Lisa, Brenda had actually been making significant progress in her life. She was a healthy version of herself and she loved Nate. She was ready to build a life with him.

Nate once compared himself to Job, the Biblical figure who had obstacle after obstacle thrown at him and began a quest to understand why all of these terrible things were happening to him. While that comparison never felt completely accurate to me, Nate always did strike me as an idealist who struggled as a result of a lot of painful events that happened in his life. From his upbringing to losing his father without really knowing him, Brenda’s original betrayal of him, developing his brain condition (AVM) and then losing Lisa, Nate carried a lot on his shoulders and he never quite knew how to take care of himself.

In the final season of Six Feet Under, the theme of how short life truly is was doubled down on. Nate loses a close friend from high school and the woman that took his virginity both within a matter of months. He begins to question why he’s always surrounded by chaos and how he can find peace. He internally knows how fleeting life can be and wants to make the most of his time here, but that speaks to his core issue of living for other people. He doesn’t know how to take care of his needs.

The introduction of the character of Maggie was also the beginning of Nate Fisher’s end game. Maggie, like Nate, tried to get through life despite years of pain that made any form of happiness feel like an unachievable concept. Both Maggie and Nate desired some level of peace, to just feel OK in life. They gravitated towards each other, the attraction more than surface level. They understood what the other had been through and they wanted the same thing.

Meanwhile, Nate and Brenda’s marriage was rocky at best. They were two people in very different places in life. Brenda’s miscarriage and concerns about the health of her next pregnancy pushed them even further apart. Brenda wanted the family she finally felt like she deserved. Nate wanted to heal. Neither of them were wrong, only the timing was. That’s the real tragedy of Nate Fisher and Brenda Chenowith, that despite having very real feelings for one another, they were never in the same place at the same time emotionally, dooming any chance they had to be together.

In the midst of an argument, Brenda told Nate to go do what he wanted in the Season 5 episode “Singing For Our Lives.” What seemed like a simple throw away line between a married couple wound up being the moment in which Nate finally broke a cycle that had plagued him his entire life. He, that day, made a choice to do what he wanted, and that was to give in to temptation and sleep with Maggie, despite having a pregnant wife at home.

It’s easy to judge Nate for his act of adultery. It’s easy to judge Nate for telling Brenda in the next episode that their relationship was over, splitting up a marriage that had just begun in which Brenda gave her all, helping raise Nate’s daughter and having another child on the way. Beneath the surface though, Nate had finally stopped trying to please the people in his life, effectively living for everyone else, and did what he truly wanted instead.

In true Six Feet Under fashion, this breakout moment for Nate Fisher occurred while doing something that was greatly hurtful and that would likely be looked down upon by everyone in his life. His moment of growth was painted with a shade of grey, emotionally complex in a way that’s very true to life. This moment of finally living for himself would be the final thing that Nate did in his life, dying just a few hours later.

Nate Fisher was many things. He was a fascinating character study of grief, how parenting affects people throughout life, and idealism. There are many times throughout the show where Nate’s lack of progress is maddening, but isn’t that so often the case with people in our real lives? We spend our lives trying to overcome pain and obstacles. We do our best, making progress sometimes and doing little more than treading water at other times. There’s no manual to life, showing us the solution for any given problem we may have. We stumble and fall, then get back up, and try to be good to those around us along the way.

That being said, Nate Fisher showed us that life is short. It could end at 40 like it did for him, an age that most people think of as being the halfway point of this journey. Are we living life the way that we want to? Are we doing the things we truly want to or are we living to please other people? Nate Fisher will always have a place in my heart. He went through so much and kept getting back up, and did his best to remain a good man throughout it all, inspiring those around him as he did.