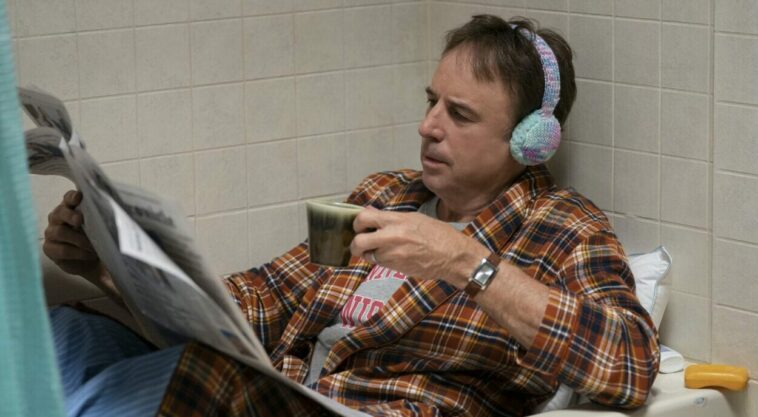 Room 104 S4E5 “Oh, Harry!” (written and directed by Mel Eslyn) is a sitcom. The style is very much of the ‘90s, from the tropes making light of familial dysfunction to the absurd premise (they are living in a motel room while their house is being worked on) to the clothes (OK, especially the clothes!).

But that “Oh, Harry!” makes us think of the 1990s is less relevant than the way it presents characters that are totally unrealistic. At least to some extent, this has been the case throughout the history of the sitcom. People do not talk this way or make so many quips. Room 104 S4E5 simply exemplifies all of those tendencies in their unvarnished cheesiness. “Oh, Harry!” isn’t even a caricature of sitcoms. It doesn’t take things farther than some of the standard fare of the ‘90s (think in particular of those shows that haven’t “stood the test of time”), it sets itself up right in line with them, complete with canned laughter.

Slavoj Žižek has claimed that the function of a laugh track is not to tell us when to laugh, but rather to laugh for us. It relieves us of the burden of having to laugh ourselves. This might seem a bit preposterous, but it is striking to me that I almost never laugh when I am watching a show with canned laughter, whether or not I think it is funny. And the same might be said for all of the witty quips and comebacks that characterize the sitcom—they are things no one would say, and thus artificial like the laughter made by a machine, but can nonetheless be cathartic. They express our frustrations for us in a non-threatening form.

After Harry is hit on the head with a bowling ball in Room 104 S4E5, he exists in a certain separation from the sitcom in which he is a character. He hears the laugh track, for example, while it would seem that the other characters do not. And he tries to break away from the script, even as the others continually pull him back to it.

This all raises questions about the identity of Kevin Nealon’s character, as well as that of the members of the cast of Room 104 the sitcom. In the opening credits of S4E5, each is listed as being played by an actor with a fictional name. Harry (Kevin Nealon) is supposedly played by Chris Carrington, Linda (Erinn Hayes) by Kate West, Jules (Sadie Stanley) by Ashley Kaul, Maddie (Skylar Gray) by Sarah Elizabeth Woodard, Will (Jason David) by Ryan Parker, and Charlie (Ron Funches) by Edward Miller.

These fake names do not seem to have any interesting significance that I have been able to discover beyond the fact of their existence, but that is enough to get me wondering whether I should be referring to Nealon’s character as Harry or Chris after the incident with the bowling ball. All that I feel confident in asserting is that he does not fully exit the fictional world of Room 104 to become Kevin Nealon.

Regardless, from this point several minutes into the episode, “Oh, Harry!” shifts from feeling like a cheesy sitcom to feeling like a horror film. Harry/Chris doesn’t understand what is going on, and cannot get anyone to listen to him, or take him seriously. Of course, this relates to the character of Harry, who it would seem is always basically a bumbling idiot that his family for some reason loves anyway. But as he has now broken away from being that character, we are presented with a certain terror through the repetition of lines that he hasn’t responded to appropriately (per the script) and quips that aren’t funny (accompanied by a laugh track) in response to his desperate pleas for help.

On the one hand, this stems from the fakeness of the “reality” of the sitcom—it turns what was cheesy into something surreal. But on the other hand, what Room 104 does here effectively thematizes the real-life experience of being unable to punch through what Martin Heidegger would call “idle talk.” Even during the family meeting towards the end of S4E5, when Linda and the kids move toward taking Harry seriously and say they support him, we do not exit the world of cliché. The “serious moment” fits into the sitcom seamlessly, as they don’t really take his issue seriously, or move to understand it, but play along the surface, acting as if they understand, or as if they don’t need to. That’s how it always goes in this sort of thing.

But that cannot be the end of the episode. The farce must reassert itself. And so Harry/Chris cannot leave Room 104, but instead stumbles and trips on various items in the messy room, ending up on the floor. “Oh, Harry!” his assembled family proclaims, before the camera pans back to reveal the motel room to be a set, with a studio audience. I guess he couldn’t see them, even though he could hear the canned laughter?

The studio audience, along with a couple of other things like the balloon that was blue being suddenly red or the differing magazine Linda reads while in the tub, makes it very hard to interpret Room 104 S4E5 in a way that would be logically consistent if we take Harry/Chris’s words at face value.

If Harry/Chris really did break out of the narrative, in other words, how do we explain the way in which the other characters in the sitcom respond with witty quips to the things he has said that seem to be off-script? This happens several times over the course of “Oh, Harry!” and it has led me to think that he does not exit the narrative or go off-script after all. That is, what if the script includes Harry finding the script? Why would that be there for him to find otherwise? And, of course, from the point of view of Room 104 the show that we tune in to watch on HBO, this is the case—this is the plot of the fifth episode of Season 4. This is the path we have to follow to make S4E5 consistent: Harry/Chris never exits the scripted story, and knows that he is playing for an audience the whole time.

Mel Eslyn has blurred all of the lines for us with “Oh, Harry!”: it is an episode of Room 104 and an episode of a sitcom called Room 104; it is familiar in that it plays with all of the tropes and clichés of sitcoms past and forgotten, but unfamiliar insofar as those tropes are disrupted, which makes it familiar again as an episode of Room 104. The experience provoked by Room 104 S4E5 is thus one of the uncanny, like seeing yourself in the mirror and thinking the reflection is someone else.

TV shows have a way of creating their own reality, no matter how divorced this is from what we know about the laws of physics or human behavior. In a show like Supernatural, for example, monsters are real, and as a viewer one accepts this. But maybe more pernicious is the false reality created by large numbers of shows taken together. These might truly color how we view others and ourselves.

That’s not necessarily a problem. Human beings are storytellers, and stories imbue events with meaning. But we can get trapped by our stories and the tropes that define them. Rather than taking you as you, I might interact with you as though you were a stereotype that I am familiar with, and thus not really listen. Or I might take myself that way, as an object determined by others rather than a subject determining myself.

This is the shift represented by the aftermath of Harry being hit in the head by a bowling ball: from object to subject. But it is ultimately inscribed within the narrative of the sitcom. While the impact may not have killed him, he would certainly be injured to an extent greater than he is. What we see is an example of the trope where a head trauma merely provokes a change in the personality of a character. In this episode of Room 104, Harry gets confused about who he is, but by the end he is back to normal.

If we take this as an allegory for life itself, the lesson would seem to be that there is no outside. You can’t escape the way in which others get to determine who you are. But we’ve always known this. Hell is other people. To truly be oneself is not to find an exit; it is to own one’s history and actions. This isn’t easy. We mostly fail, just as Harry does in Room 104 S4E5.