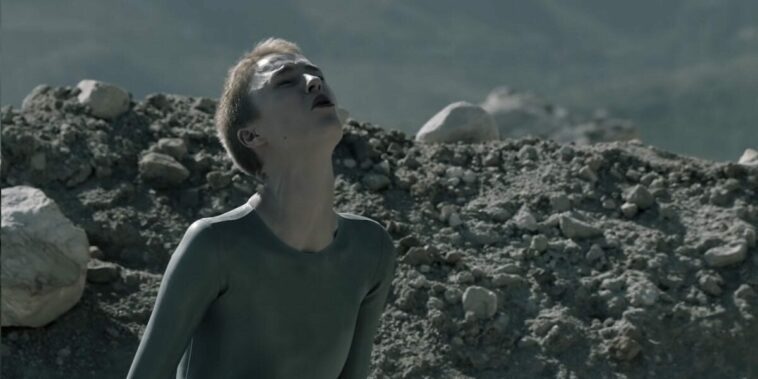 The following contains spoilers for all three episodes of the Raised by Wolves premiere on HBO Max.

Welcome, dear reader, as we begin to review HBO Max’s Raised by Wolves with the first drop of three episodes. Speaking of, here’s the one and only bad thing I’m going to say about this series: you either run a show weekly or you drop the whole shebang at once. This trickling out episodes in chunks is honestly the worst of both worlds. The HBO mothership has had wonderful success with weekly series, like Westworld, Watchmen, and Game of Thrones. Apparently with their new streaming platform they are dabbling with the idea of dropping an entire series at once, but aren’t quite ready to commit to the idea.

This is a television series featuring Ridley Scott as both director (first two episodes) and executive producer (whole series). While he has put his name on numerous projects as executive producer over the years, according to IMDB this is the first time Scott has directed an episode of television since 1969. This ought to be celebrated as an event. When Showtime brought David Lynch back for Twin Peaks Season 3, they played out the entire 18-episode series weekly over the summer of 2017. When you have an auteur director on your hands, you don’t “binge” them. You take your time; you savor it.

Anyhow, enough of the soap box moment. With three episodes to review, there’s a lot to talk about and we should get going. Be warned, we will be discussing spoilers ahead. If you haven’t watched all three episodes yet, go do that first. While these episodes don’t really carve out a particular opening act story arc, per se, they do serve to establish the themes that will no doubt play out over the rest of the series. So far, it’s looking more like Blade Runner than Prometheus, which is a big relief.

Let’s start out with a little bit of a history lesson. Mithraism is a real religion. Or rather, was a real religion, in the time of the Roman Empire. Some scholars contend that it was a competitor stamped out by Christianity, while others see it as a source for many elements that were adapted into Christianity (for example, Mithras was born on December 25). In the fluid manner in which pagan deities were defined, Mithras was both an associate of the sun god Sol Invictus (or just, Sol), and also merged with him as Mithras Sol Invictus. The religion that built up around Mithras was known as “the Mithraic Mysteries.”

So what we are seeing here in the mid-22nd century is not the follow-on religion that replaced the Judeo-Christian ones that hold sway presently. We are seeing a different timeline entirely. One in which Constantine did not convert to Christianity, but rather converted to the Mithraic Mysteries, and that religion went on to take root and spread across the western hemisphere. It’s a really interesting idea. It allows the writers to set the stage for a battle between Christianity and Atheism, but substituting this surrogate Mithraism so as not to offend. We’ll see if One Million Moms catches on or not.

All that said and done, there are a lot of religious references in the series so far, both overt and more subtle. The Atheists’ plan is to restart humanity with 12 embryos (12 being a number of religious significance, e.g. 12 disciples, 12 signs of the Zodiac, etc.). Campion dies and is resurrected. Weirdly, Mother and Father are constantly using the words “believe” and “faith” in their dialogue. The more controversial topics of child molestation in the Church and abortion are both touched upon.

Ostensibly, Mother and Father are programmed by their creator to abhor religion. Father refers to the Mithraic as “delusional” and Mother refers to their beliefs as “fantasy.” Yet after Tally’s death, Mother and Father tell their original charges that the serpents still live in the pits, to keep the children from playing near them. A convenient myth. Just like atheist parents encouraging their kid to believe in Santa Claus for “fun,” but really in hopes of eliminating naughty behavior.

More than that though, we run into the question of whether religion is something discovered or something invented. Father notes that each death Campion suffers pushes him further towards belief. “After all our teachings, it’s the only thing that eases his sufferings.” When he catches Campion praying, Father doesn’t order him to stop, he only tells Campion to not let Mother catch him.

Another religious theme being played out is “a wolf in sheep’s clothing.” That phrase has its origins in the New Testament: “Beware of false prophets, which come to you in sheep’s clothing, but inwardly they are ravening wolves.” – Matthew 7:15 (KJV). Mother is a Mithraic android reprogrammed to serve the Atheists (a feat that was not thought possible). Whereas Caleb and Mary are Atheists posing as Mithraic. All of which is setting up the dynamic of Mother and Father raising Campion on one side, and the Caleb/Marcus and Mary/Sue raising Paul on the other.

Mother has, dare I say, a religious adherence to their “core programming objective.” When Father realizes they have failed their mission, he has the flexibility to give Campion over to the Mithraic, acknowledging that he would be better off with his own kind, even if they are “delusional.” While on the Ark of Heaven, Mother steps into the nursery chamber with nearly two dozen children. Yet she only takes five back with her to their settlement—exactly as many as she needed to restore their family to its original size, and no more.

She destroys nearly 1000 of the last remaining humans in the universe—now an endangered species as Father jokes—for the sake of protecting that family. It’s a trolley problem on an epic scale, but in reverse—where the active choice kills the many to save the few. Mother doesn’t hesitate to make that monstrous moral choice.

That said, Mother is actually the first to break the protocols of their mission, when she resuscitates the stillborn Campion rather than give up on him and recycle his remains to feed the others. It’s not a fundamentalist interpretation of their mission that guides her. At one point, she scolds Father that his “strange mimicry of human love” for her makes them less safe, not more. But it’s her love for the children that drives her every decision, including the decision to kill.

The creepers (my term for now) apparently lived underground. The serpent pits are deep enough to give off thermal energy (as shown when Marcus cozies up to one his first night alone). The Mithraic survivors hypothesize that the ship crash opened up cracks in the surface. Cracks that apparently have the smell of something living down there. This would explain why Mother and Father had been on the planet for 12 years without encountering them. Something had to have changed, and crashing an enormous ark ship into the surface would qualify.

It’s also interesting that the creepers pushed Marcus over the edge of the serpent pit, rather than attack and kill him. Was their intent to drag everyone they caught into the pit? The “ghost child” (per the credits) also lured Paul into a hidden serpent pit. That creature, either a creeper or something else, was mimicking Tally, the first to die from Gen 1 when she fell into, what else? A serpent pit. It sounded like 4-year old Tally from the time of her death, not a now 12-year old Tally who was perhaps only captured or somehow survived.

It might be worth noting that the Mithraic android that sacrificed itself to lead Mother away from the survivors fell down a hole. One of the Mithraic survivors also fell into one as they scrambled to get away from the necromancer’s siren. And let’s not forget, as Father climbed down to get to the ship, he found a bit of shed skin dangling from the wall. Think we’re going to get to see one of these serpents in all of its full glory? Chekov’s serpent, as it were?

One last quick note about the “Pentagonal Prophecy,” as we now know it is called. Not sure yet why it’s called “pentagonal,” but it’s probably why Episode 2 was titled “Pentagram” for no readily apparent reason. What we know of it so far is:

The Mithraic are speculating that Campion could be the orphan boy of the prophecy. Certainly the conditions of “an empty land” have been fulfilled. Paul tells Marcus and Sue that aboard the Ark one of the other children was an orphan. The most obvious narrative choice though is that it could be Paul. He is actually an orphan now, as Caleb and Mary killed his real parents. Then again, Hunter is also an orphan now.

Here I try to point you to a few of the more interesting and informative news items over the last week related to Raised by Wolves:

That’s all for this week. Please let me know your thoughts and feelings about this week’s episodes, and any theories you have on what’s to come, in the comments below. Remember that 25YL will provide continuing coverage of Raised by Wolves throughout Season 1 and beyond.

All images courtesy of HBO Max