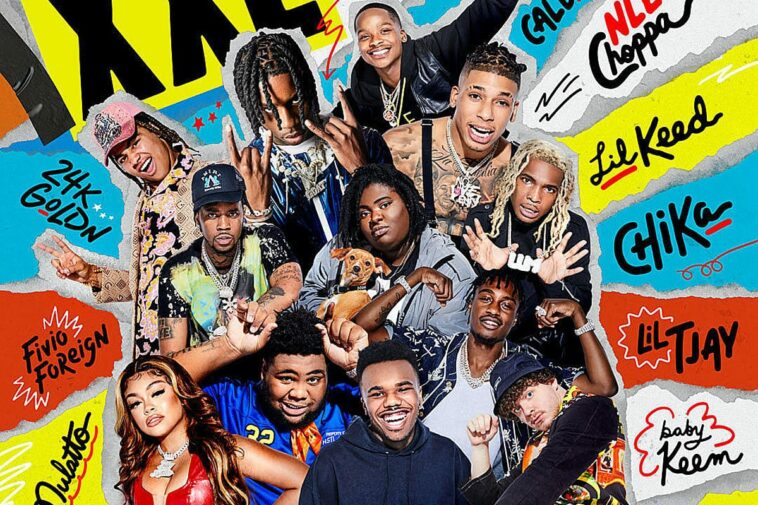 For the uninitiated, every year New York Hip–Hop magazine XXL selects those up and coming rappers it considers the most promising and puts them together on its cover, organising a round of freestyles and cyphers to showcase the artist’s talents. Nominally 10 rappers are chosen, but this target is rarely expressed in the actual line-up, with 2020 delivering the highest number of picks yet at 13 names, including the posthumous honourable inclusion of recently deceased Bashar Jackson a.k.a. Pop Smoke.

As is usually the case, artists from across the U.S. and across a variety of styles are represented, from Jackson’s fellow New York drill rappers Lil Tjay and Fivio Foreign to Californians Baby Keem and 24KGoldn. The southern states are particularly strongly represented, with Floridan Rod Wave, Tennessean NLE Choppa, Alabaman lyricist Chika, Kentuckian Jack Harlow and the flourishing Atlanta rap scene contribution Lil Keed all making appearances. Rounding out the inclusions are midwestern rappers Mulatto and Calboy and singer-songwriter Polo G.

That’s another interesting note: the increasing prominence of crossover rap in the mainstream in the last few years has resulted in a disproportionately high number of artists who sing as much as they rap. Such vocal versatility is increasingly a necessity of mainstream success, and in such a climate, the soulful, fluid singing that characterises the work of artists like Polo G is an extremely valuable commodity.

As well as that of “rapper”, XXL are increasingly stretching the definition of a “freshman”. A rapper like Chika may only have one (admittedly tremendous) EP to her name, but Jack Harlow has dropped no less than 6 mixtapes since his debut almost a decade ago and Polo G has two excellent studio albums under his belt.

Going into the freestyles after the 12 official names were announced, Polo G was my clear favourite. He has a distinctive, one of a kind delivery, with buttery smooth vocals and some of the catchiest flows around which he uses to deliver taut and impactful vignettes on violent street life and its tragic consequences. It’s unfortunate that Columbia records have so far so neglected the audio quality of his albums, as both Die a Legend and The Goat showcase a phenomenal amount of potential. I was also already highly impressed with Chika, whose Industry Games EP demonstrated a charming and relaxed ambition and a soulful, relatable sense of humour that she articulated with speedy flows and a strong arm with wordplay.

The showings of these two in their freestyles reflected this. Chika’s may have been short but she packed it with a rapid-fire, playful portrait of a flirtatious party encounter, riven throughout with fairy-tale Cinderella references. It’s effectively a pocket-sized version of her song “U SHOULD”, the speed of her words reflecting the over-thinking mindset of the scenario. Meanwhile, Polo G delivered a typically head-bobbing groove using only his voice to paint yet another tear-stained portrait of ever-present Chicago gang violence and a thoughtful rumination on the tragically curtailed lives led by those around him.

The other artists in the selection still had more to prove to me though. NLE Choppa has one razor-sharp tool in his arsenal and that’s his devastating ferocity, ripping through beats with the chaotic, evil energy one would expect from a man who named himself after an automatic weapon. When I first clicked on his freestyle I thought “he’s not going to keep going that fast for the whole thing is he?” and yes, there is an awkward moment towards the end where he has to pause for breath or perhaps switch the imaginary beat he’s swaying to. Nonetheless, his freewheeling aggression came across full force.

What music I’d heard from Baby Keem hadn’t exactly set me up to be disappointed by his freestyle, but the exceptionally slow, downbeat tone and delivery, addressing his freestyle to his shoes while leaning against the wall, missed the mark for me. The little “ay” ad-lib he throws in completely throws off the depressive vibe he’s going for. His lyrics were better and more expressive than I had anticipated, but his delivery didn’t sell them to me. However, the worst sin this freestyle commits is that it is completely unlike anything I’ve heard in his actual music. Freestyles like this are supposed to sell yourself to a new listener, but anyone who liked this freestyle would be sorely disappointed by his actual music.

Although I had expected the least from Baby Keem, it was Lil Keed who set the lowest bar with the freestyles this year by a considerable margin. His acapella singing is quite laughable, completely unsuited to the freestyle format, and he was unable to deliver a mere 35 seconds-long freestyle without swallowing his words on the flow switch. Yes, just one, solitary flow switch. The way the camera floated around the performers this year never failed to be awkward and distracting and Keed seemed genuinely perturbed by it as if it were a bird about to drop something on his shoulder.

A little less awkward was Rod Wave. I had expected to be making fun of his freestyle, as his music is bland and generic, but I actually ended up feeling rather sorry for him. I have never seen a professional performer look more uncomfortable to have a camera in their face. He composed a well-written freestyle with a smooth, fluid flow, but delivered it like a schoolboy being forced to apologise by his teacher, with flop sweat rolling down his forehead.

Mulatto’s brand of boisterous bangers doesn’t set her up tremendously well for a freestyle setting either, but she brings a more laid back form of attitude and confidence that she sells well enough. It’s hardly a show-stopping performance, but she didn’t let listeners down either. Lil Tjay joined her in passing the bar with a short, unmemorable and unambitious but technically competent performance that had enough youthful energy not to feel like a disappointment.

Perhaps the biggest surprise for me was the appearance of Jack Harlow, whose biggest hits indicate a trashy, frivolous artist, but who delivered a poignant, well informed, lyrical and righteous freestyle addressing the protests against police violence. Including references to specific police murders and to the need for positive and long-lasting collective action, it’s a conscious, eloquent and elegant piece of allyship that won him a tonne of brownie points in my book.

I left Fivio Foreign’s biggest songs with little in the way of a concrete impression of his personality or identity. He seemed like a fairly boilerplate but solid and credible up and comer positioned firmly within the prevailing trends of his New York Drill sound. However, his freestyle did exactly what it needed to; his eccentric movements and broken up flows were sufficiently hardcore, yet playful, fun, and above all memorable.

The last to give a freestyle performance was 24KGoldn who, from day one, just struck me as a Juice WLRD clone, and his freestyle didn’t really do anything to dispel the notion that he didn’t really have much potential. Say what you will about Juice WRLD but his freestyles were legendary, while 24KGoldn instead sang his entire freestyle, essentially just performing a song, complete with chorus. His singing wasn’t bad–it was easily a step above Lil Keed’s–but his lyrics were sub-par, and his persona, dripping in smugness, wasn’t very endearing.

We’ll have to see how the Cyphers pan out, or even if they’ll go ahead given the COVID–19 situation, but there were few surprises in the Freestyles. The players I expected the most from gave the most, and the underachievers passed the low bars set for them. Lil Keed delivered the token truly awful performance and the likes of Jack Harlow and Rod Wave surprised me with some unexpected depth, but NLE Choppa, Chika and especially Polo G came out just as far ahead of the pack as they went in.