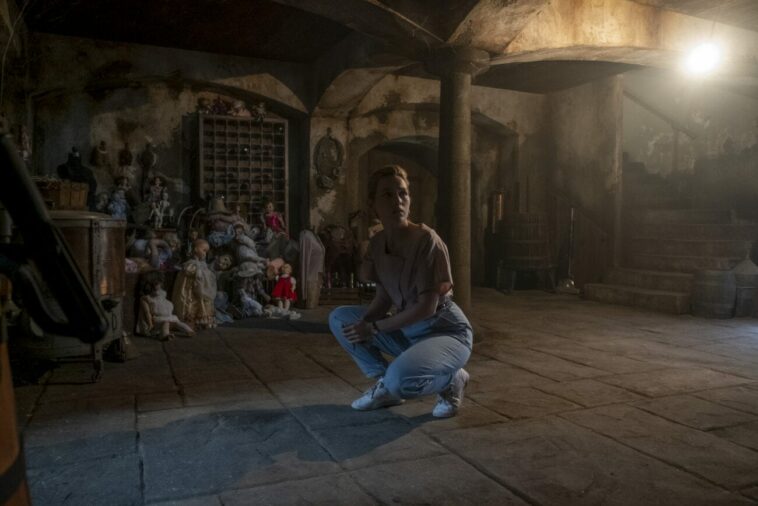 When one thinks of ghost stories, they think of books being thrown from shelves by invisible forces, or something hiding in the darkness out of the corner of your eye. They make you quiver and fear for what will pop out and scare you. Then there are the ghost stories that bring about an eerie beauty and a sense of romance. Lovers pulled apart by an untimely demise, or a person cursed to be alone forever because of misfortunes that have befallen them. Netflix’s The Haunting Of Bly Manor presents this side of horror, which seems to have been forgotten in the wave of slasher flicks and torture porn, in the second installment of Mike Flanagan’s The Haunting series.

When someone adopts a story into a different time period, a few things can happen. The language and themes of the original piece can be lost by overcompensating with the “style” of the time. This has been seen in many takes on Dracula. Most notably Dracula 2000, which decided to smother its story in what people believe is a Gothic aesthetic when in reality it’s what pop culture had dubbed Gothic.

In other cases, the tone and themes of the original piece are played up in the story for a modern audience. 1999’s The Haunting (a take on The Haunting of Hill House) was guilty of this. Eleanor’s mental health was emphasized to the point of almost being a comedy, and the entire story became cartoonish (and I’m not just talking about those early ’00s digital effects or Owen Wilson losing his head).

Series creator Mike Flanagan manages to take Henry James’s The Turn Of the Screw, and many others of his stories, and move them into the 1980s while keeping the Gothic atmosphere of the original. Watching au pair Dani Clayton (Victoria Pedretti) wander the halls of Bly as she appears small compared to the gigantic archways surrounding her, or having the camera pull away in a dramatic crane shot as she sees her two young charges glare down at her from their windows, are just a few ways this series manages to capture the tone of the Gothic Romance era.

Corsets, evening gowns, and fancy updos are traded for a late ’80s wardrobe, which takes a toned-down appearance compared to other shows set in that time period (like Netflix’s other hit Stranger Things). The typical bright and bold patterns are changed for muted and solid colors. The addition of jean jackets and all the small floral prints are more reminiscent of an early ’90s look. Groundskeeper Jamie (Amelia Eve, whom I believe will quickly become a fan favorite) and Peter Quint (Owen Jackson-Cohan) sport subdued “Madonna” and Miami Vice looks while cook Owen (Rahul Kohli) sports a mustache that is more reminiscent of Queen’s Freddy Mercury. This mismatch of styles adds to the idea that ghost stories are timeless, and it doesn’t distract from the story being told.

Watching The Haunting Of Bly Manor really is like reading old school Anne Rice in that while it is not heavy on plot or action, it is the aesthetic and characters that carry you through. Costumes aside, every frame and every set is an attack on the eyes (in the best possible way). Unlike the constant dark and coldness of The Haunting Of Hill House, Bly Manor is rich and warm. The very manor itself looks as though it has come right out of a romantic British Period Drama (and I did find myself going “I wonder what the Crain family would have thought of this place?”). The bright green gardens (props to Jamie for keeping up with those), the spacious grand entryway, the cemetery, and little church all make Bly Manor give off the appearance of being a welcoming community, and as a viewer we allow it to take hold of us. Once we feel as welcome as Dani is, or as safe as Hannah Grose (T’Nia Miller) and the other household staff are, we are given the privilege of joining in on the progression of the story.

When watching The Haunting Of Bly Manor I felt as though the flow of the episodes and the overall story was very reminiscent of British horror films such as 2011’s The Awakening or 1995’s Haunted. Both of these pieces are not well known, but their stories are character-driven and also present a Gothic aesthetic in a similar way as Bly’s.

Mike Flanagan has said “Hill House is about a tight-knit family and Bly Manor is about strangers. A family that is created.” It’s hard to be able to create an environment where Dani could feel accepted so quickly while also making us understand why Uncle Henry (Henry Thomas) keeps his distance from his niece Flora (Amelie Smith) and nephew Miles (Benjamin Evan Ainsworth). Yet, by the end of the second episode, we already feel as though we’ve been a part of the household for some time. We are welcomed to the kitchen table as Mrs. Grose, Jamie, and Owen joke about their new American family member. It’s this quick attachment to characters, and being let into their inner circle, that allows for each episode to hit our emotions more and more.

The Haunting Of Bly Manor keeps a similar format to what The Haunting Of Hill House had, where it explores deeper into a character with every episode. By the time you hit Episode 9 you have become so enthralled by what is happening to everyone, the ending stays with you. Let’s be real here, you will most likely get to the end and instantly want to start it over, as I have.

As in most of Mike Flanagan’s work, he pulls the best performances from his young cast. Where most horror films have their child actors overact, everything Flanagan gets from Smith and Ainsworth feels real. The performance given by Ainsworth is especially haunting. It’s incredible watching an actor so young tackle themes and scenes that are so adult, and doing so with the appearance of knowing what he is exploring. You genuinely believe he understands what is going on. Smith, meanwhile, is able to naturally go from innocent to “old soul” and back again in her performance. You can see that she’s given Flora the ability to accept long ago what has been happening at Bly, but also the confusion as to what is happening to her now. Nothing in what either young actor does feels fake, whereas if it was attempted in other pieces, we likely wouldn’t be given the same level of performance.

I work at a performing arts summer camp where the theater department is broken down into Upper, Middle, and Lower camp. Both Amelie Smith and Benjamin Evan Ainsworth would be placed into either Lower Camp or “Lower” Middle Camp productions based on their age. Their performances in Bly Manor though, are more reminiscent of the Upper Camp productions of Violet or Blood Brothers that I’ve seen done by teenagers, that have given Broadway a run for their money.

Flanagan doesn’t just have a magic that brings out the best in his young cast members. He also brings that level of commitment to his adult actors. He knows what strengths to pull from each actor. Rahul is known for doing mostly comedic roles, but pulls off being distraught, and is allowed to bring some light comedy to moments that don’t feel as though they are just thrown in. The performances Flanagan gets from everyone, including Kate Siegal who completely breaks your heart and then haunts your dreams after, are what keeps you watching and feeling invested.

The Haunting Of Bly Manor may share a lot of the same cast as The Haunting Of Hill House, but nothing feels repetitive in their performances. Also, some characters may have reminded you of your favorites from the first series, and it really works in Bly Manor’s favor. Amelia Eve’s Jamie is similar to Hill House’s Theo, in that she finds herself having a hard time connecting with people. Hannah and Owen share moments that are reminiscent of the playfulness of Olivia and Hugh, and Victoria’s Dani at times becomes very nostalgic of Nell Crain.

Having a familiarity between The Haunting Of Bly Manor and The Haunting Of Hill House was a smart play on Mike Flanagan’s part. Not everyone is like me, who enjoys a great ghost story that is more about its characters than its ability to actually frighten. Not to say that there aren’t some great scares to be had in Bly Manor. This series is a slow burn, and for those who want a straight-up scary ghost story, The Haunting Of Bly Manor will be hard to get through. However, those who enjoy reading classic literature may find this series quite enjoyable and appreciate many of the little nods to Henry James’s other works. Don’t be deterred, because once again Mike Flanagan has created a beautiful piece of cinematic art which, to quote Flora, “is perfectly splendid.”