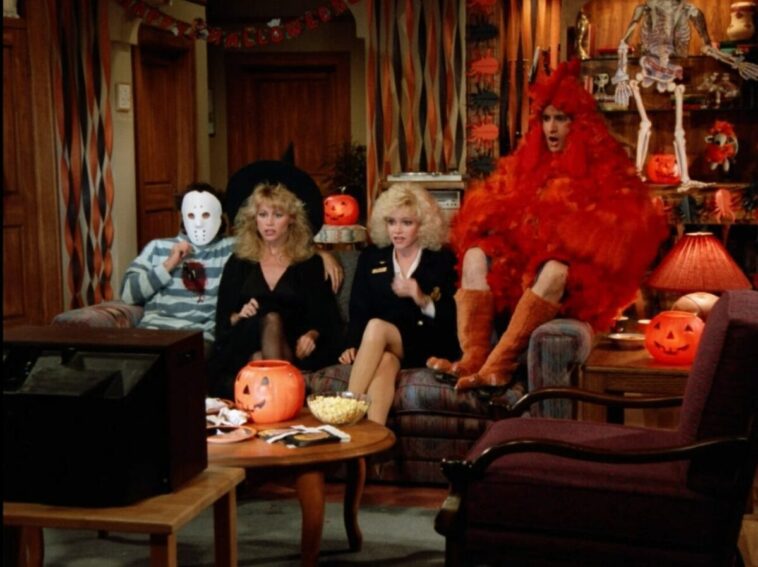 In the tradition of the sitcom, Perfect Strangers starts off with a light, happy, upbeat song in the vein of The Mary Tyler Moore Show. The shows certainly have their similarities as the lead characters also all work in news, though Moore’s show is still a staple in American culture where Perfect Strangers has never been involved in the conversation.

I present to you an episode I loved as a kid completely for the surface narrative and as an adult have a much better appreciation for. Using just the right amount of satire hidden behind a lot of horror trope silliness and a whole lot of cringeworthy ’80s jokes (there are definitely references to Ishtar), Season 4’s “Aliens” utilizes invasion tactics to thwart intolerance and xenophobia and hide issues in its story by playing on the fears of its audience, as Balki (Bronson Pinchot) begins an alien conquest. 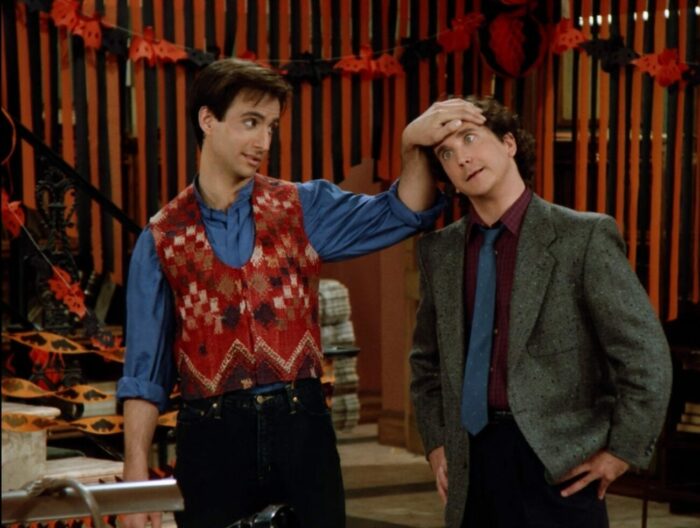 Balki Bartokomous came to the States to live with his distant cousin Larry Appleton (Mark Linn-Baker) though the two never really knew each other (hence the title of the show). Larry opens his heart and guest bedroom up to his distant relative and the two become fantastic roommates who get into all sorts of wacky situations, usually through Balki’s misunderstanding of the modern world, being that he was a shepherd back on the fictional Greek island of Mypos.

Perfect Strangers was different for the ’80s, a way to bridge the gap for Americans with cautious, fearsome attitudes towards immigrants and other cultures. Much like the way Andy Kaufman approached Taxi’s Latka Gravas, the way I think Bronson Pinchot approached Balki Bartokomous is with a light, whimsical attitude that gave the character his unique quirkiness. Though of Italian and Russian descent, Pinchot wanted to be culturally sensitive in his approach, only agreeing to play the accented character of Balki after visiting Greece and believing he could bring the hospitality of the region to the role.

“Aliens” (note the duality of the title) centers around Larry and his insatiable need for a horror movie marathon on Halloween that everyone he invites isn’t too keen on. Balki tries many times to understand his cousin’s need to be frightened, which sparks a brief conversation about the power of horror movie images and the cultural debate over the violence therein. Seeing as the invention of the PG-13 rating had just come into existence in 1984, the argument ensues with Larry attempting to calm Balki by telling him they’re all “Make believe,” and Balki retorting,“[The movies] are about bad people doing bad things and I believe they put bad thoughts into my head.” 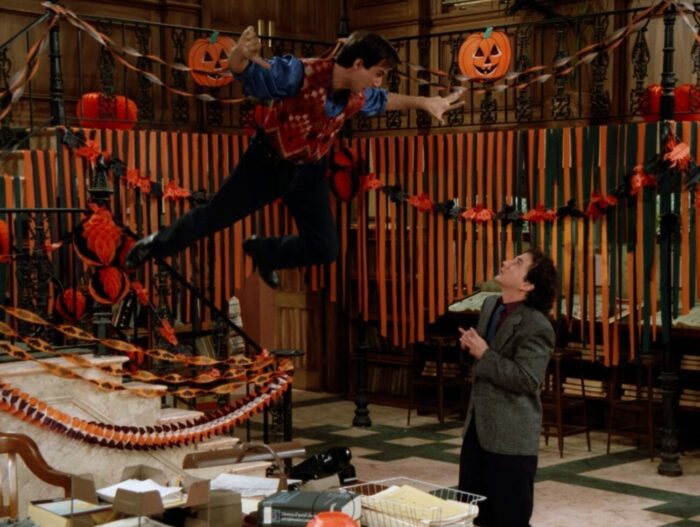 The result of their conversation is the catalyst for Larry’s dream as he lays on the couch falling asleep to the still terrifying Invasion of the Body Snatchers. Though it’s never mentioned what version of the film it is, the 1978 remake would never have been a PG rated movie by MPAA standards today.

The overlooked well-written parts of the episode (by Paula A. Roth) stem from the cultural bias that still exists in America. Remember, Larry and Balki work at the Chicago Chronicle and Larry is reading and writing daily news. Even before they’re found watching movies on the couch with Jennifer (Melanie Wilson) and Mary Anne (Rebeca Arthur), Larry refers to current affairs by telling Balki, “People love to be scared, that’s why so many of them live in New York.” This line refers to New York City’s crime rate rising steadily throughout the ’80s.

In December of 1984, Bernhard Goetz shot four young black men while on the subway, claiming they were attempting to rob him, while the survivors maintain they asked him for $5 for arcade games. In Jordana Ossad’s article following the suicide of one of those survivors in 2011, Mitchell Moss, a professor of urban policy and planning, says, “We really had a city out of control [during the 1980s], New Yorkers were living in an environment in which they had really become accustomed to a high level of crime.” The article also highlights poor race relations in the city following the incident.

I mention Goetz only for perspective into the news of the mid-1980s, but even still his own hate driven words towards his victims, mentioned on Biography, show a sour individual full of hate: “I wanted to make them suffer in every way I could…If I had more bullets, I would have shot them all again and again. My problem was I ran out of bullets.” After the incident, one Goetz victim received a disgusting amount of hate-filled racist letters and death wishes, as noted in Larry McShane’s article. Add in Ronald Reagan’s roll back of civil rights and “reverse-discrimination” policies and this sense of real-world xenophobia can easily become an underlying social commentary especially suited for a show like Perfect Strangers. 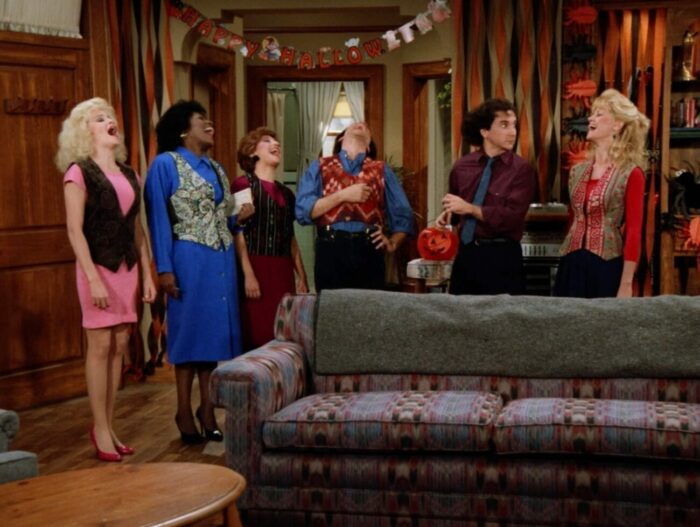 As Larry’s dream begins, though the audience is unaware it’s a dream, Balki is transformed. The movie marathon Larry made him watch has altered him. Although he is just as wacky, he’s no longer scared by Larry, and begins shooting lasers out of his fingers and walking through the walls. The new Balki makes a classic Myposian meal and has become ardent about Larry visiting his home. This scene of cultural differences mixed with the kindness of Balki’s action is used as almost a cultish maneuver for Larry’s trust creating the paranoia aspect for Larry, who begins challenging everything that is Balki immediately.

Larry isn’t xenophobic on the show, but his dream in 1988’s “Aliens” places him in a satirically absurd role with a deeply concerning different version of Balki. In fact, Perfect Strangers actually started in 1986, just before President Reagan signed the immigration amnesty bill into law while it floated around the house and senate for a year. This law led to the amnesty of millions of undocumented immigrants in the country and was a source of contention among many. It’s actually hard to believe the show runners didn’t see this as an opportunity to tell lighthearted stories about a man and his immigrated cousin, mixing in some satire to create their morals.

The satire in “Aliens” doesn’t get any clearer than in one scene, where Balki actually begins brainwashing Larry, but because Larry doesn’t want to eat pig snouts he somehow finds the will to stay sane. Like I said, it’s silly but it’s also silly that people think that accepting those from other cultures and backgrounds could brainwash them or at the very least challenge their own beliefs. My favorite part about all of this is that none of the characters really change outside of adopting new clothing and saying catchphrases inspired by Balki. Even as conformed pod people, they seem to be having a good time. 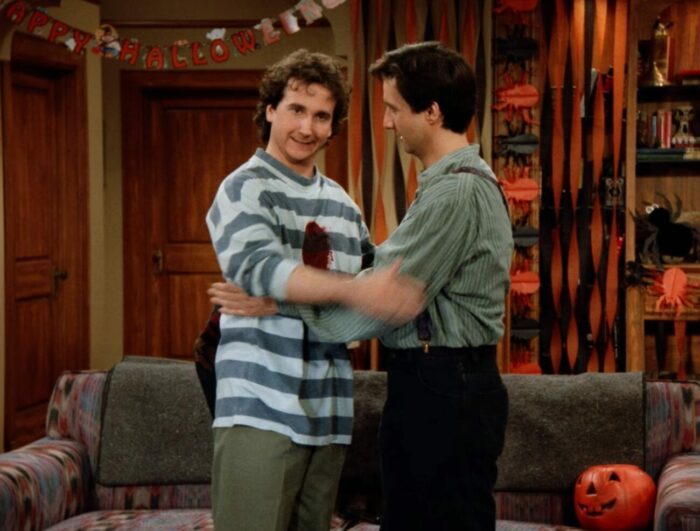 At the close of the episode, Larry wakes up happy to have a knife in his chest, still wearing his Halloween costume from the night before. As Larry reconciles this world and the dream world the surface moral is not to watch 12 hours of horror movies, but as we go beneath the surface Larry talks to Balki about the nonsense in his dream and because he knows Balki’s heart so well he asks him to answer a question about what he would do if he were ever mugged on the street. It’s a test to Balki to make sure he is really the sweet, gentle man Larry has grown dear to, with Balki replying in all positives to his hypothetical mugger from “Spend [the money] wisely” to “You should join a gym to find a more positive way of taking out aggression.”

“Aliens” uses the angle of horror movies to mask social issues by genuinely saying it’s not movies that make people who they are and we can’t blame films on a topic like racism or xenophobia. On the surface, the episode is a great watch filled with silly gags and some A+ harness work, but the deeper lesson of being kind to one another and getting to know those outside our regular purview resonates throughout Perfect Strangers. The thing I’m most afraid of in its nearly 30 years off the air is that there are still those unwilling to try.

Sean lives just outside of Boston. He loves great concerts, all types of movies, video games, and all things nerd culture.