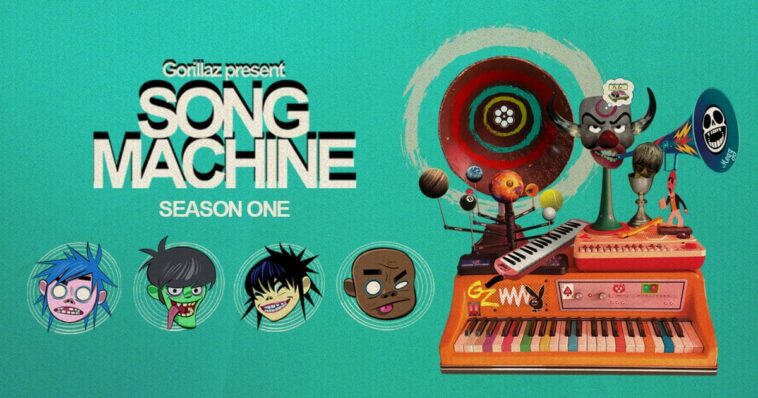 Originally Song Machine was intended to an ongoing series of standalone singles released monthly, with Damon Albarn and drummer Remi Kabaka Jr running an open-door studio policy so contributors could come and go as they please. The intention was that both artists could avoid spending six solid months recording an album. But then Covid-19 happened. So recording sessions moved online and release dates got pushed back. Then tragically, Afrobeat legend–and frequent Albarn collaborator–Tony Allen died of an aneurysm; in tribute Gorillaz dropped his collaboration with Skepta a few days later. Song Machine struggled on a few months until 20th July when they announced a brief hiatus, which came to an end in September when they announced the release of an album: Song Machine, Season One: Strange Timez. Like everyone else’s 2020, nothing this year has gone as expected.

Given its convoluted birth, you may reasonably expect Song Machine to be little more than a playlist of odds and sods. Yet despite the variety of genres and experiences on display, Song Machine is a cohesive listen.

Sourced from sessions recorded before and during lockdown, Song Machine is more laser-focused than it’s predecessor Humanz, which often had all the careful artistic curation of an A-list star’s phone contact list. In tone, Song Machine is not dissimilar to Albarn’s bittersweet solo album Everyday Robots.  While Robots was preoccupied with how technology disconnects us from other people, Song Machine mainly deals with the emotional fallout from lockdown and the strain of maintaining relationships over a long distance. Although the guest list is typically jam-packed–as is standard for any Gorillaz record–Song Machine paradoxically feels like the most personal thing Albarn has ever recorded: a culmination of a lifetime’s work of documenting the little details of people’s lives and making great art out of it.

Musical hybrids have always been Gorillaz’s raison d’etre but Song Machine seems more nuanced than before; taking what is distinctive about their contributors and doing something subtlety different with it. Robert Smith sounds more helpless than usual on the heightened drama of “Strange Times”, a track which rises and falls like The Stooges “No Fun” transposed to Afrobeat. While Peter Hook‘s distinctive bass on “Aries” hangs over Georgia’s lush synths like a black cloud; turning a potentially wistful track into something emotional devastating. It stands toe-to-toe with his finest moments with New Order or Joy Division and is one of the best tracks of the year.

It’s a fool’s game to try and pick out stand-out performances on Song Machine because they are just too many to choose from: Schoolboy Q’s sleazy grunts over the g-funk of “Pac-Man”, Leee John’s unnaturally high androgynous voice swooping over “The Lost Chord”, Fatoumata Diawara’s powerhouse of a voice riding roughshod over “Desole”’s flirty mix of flamenco and African folk, or Roxani Arias’s steely-eyed soul and Kano’s hard-won wisdom over the sleepy jazz of “Dead Butterflies”.

In hindsight, the pairing of Punk duo Slaves and Slowthai—who was a drummer in a punk band before he picked up the mic–on the skanking “Momentary Bliss” seems so bloody obvious it seems incredulous it didn’t happen before. The end result lives up to the billing, spiritually drawing on The Specials brand of social justice as Slowthai chastises a girl for frivolous and wasteful spending.

For all the experimentation, no track ever feels disjointed. “Pink Phantom” builds a cumulative intensity by cutting frequently between Albarn’s self-pitying, Elton John’s overwrought declarations of love and 6LACK’s autotuned introspection. While Octavian’s narcoleptic croak over the lazy reggae of “Friday 13th” becomes almost too sad to listen too when the song reaches it’s teary-eyed coda: “is she loyal? Oh it’s a beautiful day”. It perfectly captures the quiet desperation of a character stuck in the trap of addiction, clinging onto the flimsiest of connections to stay sane.

The only guest whose style overrides the collaborative spirit is Beck on “The Valley of The Pagans”; his intricate wordplay and satire of lockdown Los Angeles sounds like a Midnite Vultures offcut. Whilst that’s hardly the worst musical crime, it does feel out of place. Far more on-brand is the new wave pop of “Chalk Tablet Towers”, which although is full of St Vincent‘s mannered delivery and off-kilter songwriting still sounds low-rent enough to blend in with its surroundings.

If you are listening to the CD or the standard vinyl, your season one experience ends with just 11 tracks. However on deluxe editions and streaming, you have another six tracks to enjoy, all of which are equally deserving of your attention.

The bubbling trance of “Opium” set’s the mood: euphoric beats and pointed shout-outs to important cultural cities currently shut down by Covid. Earthgang’s Johnny Venus sums up the whole album in just a couple of bars:

I’ve been cooped up for a minute

I’ve been inside working on me

I’m gon’ dance my way out of this

The hypnotic ragga of “With Love To An Ex” takes “inside working” to the next level when the track erupts into an epiphany of Tibetan chimes and phased trumpets. While the cabin fever of being cooped up for six months comes to a head on the clanking house of “Severed Head”, with Goldlink rasping his lines as if an anxiety attack is coming on and Unknown Mortal Orchestra‘s Ruban Nielson’s sighing off every line in his weary falsetto. If this all sounds a bit heavy than “MLS” is here to lighten the mood, with its cheeky homage to A Tribe Called Quest, from Chai’s effortless harmonies to JPEGMAFIA’s spot-on imitation of Q-Tip’s breezy flow— it’s as relaxing as a cool shower on a hot day.

The instrumental of the final track “How Far” is default Gorillaz: a bass loop, sparse samples of orchestration and the sound of Tony Allen’s hearty laugh peppered through the track–but Skepta’s highly quotable verses take it up a notch. His ice-cool delivery sends the album out with a cocky stride: “Looked at the man in the mirror, that’s the only enemy that I fear”.

2020 is a year where little has been ordinary or usual. Song Machine succeeds by embracing our shared anxieties and hopes without pandering to bland platitudes. If Humanz seemed directionless, Song Machine is grounded by an autumnal melancholy and Albarn being more at the forefront than before. It’s probably the best album Albarn has put his name to this century.

As the nights draw in and further restrictions loom, you can do worse than put this album on and to heed the words of Johnny: “I’m gon’ dance my way out of this”.