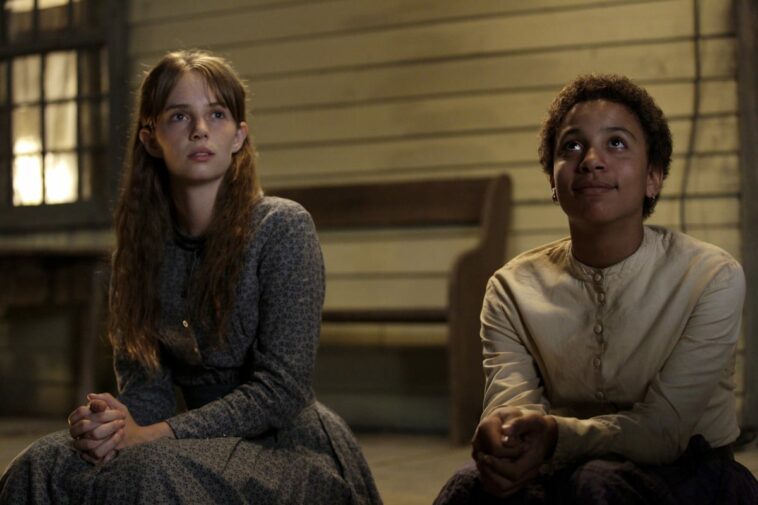 The Good Lord Bird hits hard in Episode 5, “Hiving the Bees” as pretty much everything John Brown (Ethan Hawke) and Onion (Joshua Caleb Johnson) have been planning so far falls apart completely. The episode serves entirely as a setup for the raid and devastation to come but it is much needed and well paced. Over the course of the running time, we discover the fatal flaw of Brown’s plan is John Cook, Onion falls in love (for real this time), and the esteemed Frederick Douglass fails to pull his weight.

At the onset, Onion and John Cook (Rafael Casal) are already on their way to Harpers Ferry to fulfill their roles in the mission. Onion and Cook try vastly different styles of “hiving” the various bees but both, initially at least, do a fairly terrible job of following through. Onion’s issue remains his innocence, and the fact that it seems by now that nearly everyone they meet seems to realize he is a man dressing up as a woman, and immediately uses that knowledge against him. Or even in the best of cases, it causes characters otherwise sympathetic to the cause not to trust him.

The way Johnson has portrayed Onion has grown so confident and assured that it is difficult to imagine anyone believing him when he tries to act demure. It also seems to be a bit of commentary on the racial dynamic of the show. The Black characters are not duped by Onion’s portrayal at all, whereas, no matter their sympathies, the white characters just believe Onion is a girl. Onion basically immediately alienates the Black population of the town with his open calls for them to join John Brown’s raid.

Cook, on the other hand, seems to have entirely more earthly delights on his mind. Immediately upon their arrival in Harpers Ferry, indeed prior to even getting lodging, Cook meets and “befriends” a local woman. She leads Cook off to find a suitable lodging while Onion goes off on his ill fated attempt to secure the support of the local Black community. Even in that first moment one can tell that Cook is not the right person for this job—he is brash and impulsive, and driven by his lustful desires more than any cause.

He nearly spells out the plan to the woman instantly, just in his attempt to get Onion away from them. Cook’s role in the story is unfortunately only going to become more and more important, but it already seemed to be the case last week in “Smells Like Bear” that he was the least trustworthy of the new recruits. His disastrous turn during this early recon period in Harpers Ferry only proves the point beyond any doubt. Casal is great as the skeevy and decidedly amoral Cook, but every time he’s on screen I want to scream at Onion and Brown to get as far away from this sketch ball as possible, as quickly as they can.

Onion, despite his early failures, does manage to make the one really important contact he was sent to make: meeting and enlisting the support of the Rail Man (Orlando Jones). The Rail Man, despite once again being very put off by Onion’s presentation, is on board with the plan. This is because he already knows about it from the General more than anything that Onion does or says. Jones is presented in these scenes as an almost mythic figure. All smoke and train lights shining through darkness. The camera work is also different, with a low angle that keeps the viewer in a constant dis-ease throughout the scenes.

It all reminded me of the amazing work Jones did as Mr. Nancy in the American Gods adaptation on Starz. There, as here, Jones plays the character as an apocalyptic harbinger, though there all that is much more literal. Unfortunately, his role on that show was cut short due to some questionable production decisions. In my head canon, The Rail Man is another incarnation of Mr. Nancy though. Fated to push Onion and the men following Brown to their destiny and allowing them, in their deaths, to unleash the full fury of his power on the depraved world.

At first he is skeptical of both Onion and the plan he has heard. The Rail Man asks Onion go back to Brown and get money so he can use it among his contacts to start “greasing the wheels” for them to join the cause, and to get others to join. Onion and Brown though actually prepared for this and he immediately hands over the $500 The Rail Man wanted. I definitely thought there were going to be issues like Cook having stolen the money or something, but it turns out Cook is doing enough trouble by just not keeping his trousers attached so this interaction goes down easily. The Rail Man agrees to start to stir up the Black people along his route and to get as many as possible to join Brown.

After all the setup is done, it is time for Brown and the boys to make their arrival. In an amazingly shot scene, Onion sees the bright silhouette of the old man through the door. Immediately he runs to kick Cook’s paramour out of the bedroom and out the back door of the house before Brown sees the sinful things that have been happening. Interestingly though, once Brown comes in and has a reunion with Onion, we learn once again that he is not naïve to things that Cook is up to.

Hawke’s face continues to look more weathered, his voice more haggard, but his eyes are sharp and cutting. He knows that he put his lot in with some unscrupulous types, but even the sins of Cook are no deterrent. It is the sin of slavery that John Brown is alive to end, not the other failings of man. Once again in the scene where Hawke and Johnson play off of each other, each of them is able to tell the whole story of the relationship between these characters without a word. It is a powerful reminder of the reason some actors are considered great, and how amazing it is to see a newcomer like Joshua Caleb Johnson play so well against a masterful performer.

The relationship between John Brown and Onion isn’t even the emotional crux of “Hive the Bees” though. That honor falls to a budding love story between Onion and a new character. For, in addition to “the Old Man” and his army, two of Brown’s daughters have also come along for this endeavor. Martha (Gia Crovatin) and Annie Brown (Maya Hawke) are each fascinating characters in their own right. In some shows the two young women might have been an afterthought, but once they show up here the show gives the viewer time to know and understand them. We only get one scene where Martha gets to show off her playful personality. Annie though we actually get to know really well in her few scenes and while she is a fascinating character for the audience, she is a revelation for Onion.

Maya Hawke had already won over a significant fanbase with her work as Robin on Season 2 of Stranger Things but she brings an entirely different, though equally winning, energy to Annie. She is smart, capable, and loving of everyone. Much as he was with Pie, Onion is enamored from the moment Annie arrives. Unlike that ill fated “relationship” though, Onion and Annie spend the next few months getting to know and like and respect each other. Annie seems to have her father’s openness, and her brother Owen’s fire, but also a love of life that is something all its own.

She and Onion are drawn together as they study Shakespeare and the other “great books”. In a lovely romantic scene they look at the stars and it seems that Onion is going to confess his secret. Or that Anne is going to kiss him despite it. But that interlude is broken up by Bob (Hubert Pont-Du Jour). Bob’s life and knowledge of what it is like to be a Black man in these terrible times are things that it seems Onion is never quite able to hear. But it does break him of his daydream of being with Annie. Though they do perform a scene from Twelfth Night that I am convinced Annie chose because she knows Onion is a man and wanted him to reveal his love for her.

The play is broken up though as Annie and Onion have the second of their run-ins with the neighbor Mrs. Huffmaster (Patricia French). Despite Annie’s best efforts, Huffmaster makes every effort to incite them to attack her and to prove they are up to no good. It turns out that Cook has poisoned the well since his lover from earlier in the episode was Huffmaster’s brother’s wife. Unfortunately, due to that issue and the fact that Cook continuously ran his mouth all over town about their plans, the entire operation is nearly blown. After the confrontation with Huffmaster a tearful Annie informs the others that the sheriff is on his way. This sends everyone into a frantic state of reorganizing as now they have to figure out a way to either escape, or move the plan ahead by months.

Also causing the mission to go off the rails is one Frederick Douglass, or at least the fictional version of him in The Good Lord Bird. Onion and John Brown go to meet the esteemed orator once more and Brown basically begs him to join the cause in person. Daveed Diggs portrayal of Douglass in “Mr. Brown” was a marvelous balancing act as it seemed he really was committed to the ideals of the cause, just cautious and willing to play a longer game. He is only in two scenes of “Hiving the Bees” but his vainglorious act moved him squarely into villain territory here. Douglass absolutely refuses to help, even with Brown kneeling on the ground before him. It is a painful scene, and difficult to reconcile with the real Douglass, but an excellent bit of dramatic theater.

With all of the issues and the sheriff bearing down on them, Brown decides to do the one thing that Harriet Tubman implored him not to do. He moves up the date of the raid. By disobeying the General he puts her unable to help, he puts The Rail Man in a dire situation with recruits, and he has his daughters and Onion sent away. Onion goes along with this and seems content head off into the sunset with Annie until he realizes he has to go back. He is the only one who has spoken to the Rail Man, and he had not told the others of the code the Rail Man gave him to clue everyone in that the attack is still on. So Onion stands up, rips open his shirt to reveal his secret, and declares his love for Annie. Then he jumps from the wagon and runs off to meet his destiny with the “old man”. As Annie calls out for Onion, we all move onward toward the end.