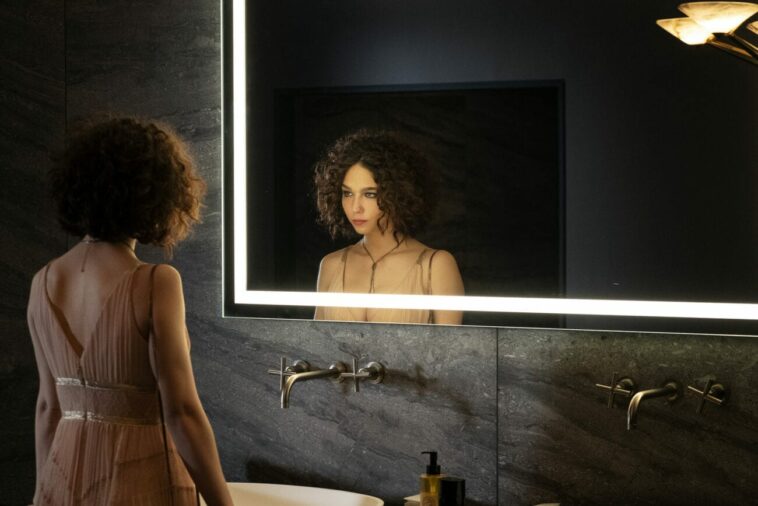 The Undoing Episode 2 (“The Missing”) picks up where Episode 1 left off: Grace is on the phone, trying to track down Jonathan in Cleveland, and failing, though she does talk to a man who apparently shares his first and last name. In the repetition of the scene, Grace’s perspective is emphasized as doubt and suspicion creep into her mind. The Jonathan Fraser she locates in Cleveland probably has nothing to do with this story, yet the experience is off-putting. Something is wrong, but she doesn’t know what, and of course she wants to pretend that nothing is.

In a situation like this, you tend to run through scenarios in your mind, but the most unsettling thing is when you can’t find one that makes you believe (at least for a moment) that everything is probably fine—it’s all been a misunderstanding. Often all of the scenarios you ponder will indeed be off base and out of line with the reality of the situation. At least this has been my experience, when I have finally been confronted with an explanation as to why my girlfriend hadn’t gotten back to me for an extended period of time and everything made sense and seemed excusable even if only because I wanted to excuse it.

In one sense, not much happens in The Undoing Episode 2, but in another the action is deep. It is perhaps this episode, and not Episode 1, that should have shared its title with the series, because it is here that things truly begin to unravel. First, they do so with regard to Grace’s psyche. Because even if her suspicions turn out to be warranted (and we don’t get access to what precisely is going through her mind even if we dwell with her perspective), she is still paranoid for the bulk of Episode 2. She’s paranoid because the threat is nebulous. She’s anxious because what she is afraid of is ill-defined. She wants to believe that her husband is the man she has thought he is—just see how she tries to explain away the complaint that got him fired when she talks to the cops—but at some level she knows that life has already come undone.

The other parents at Reardon are talking about her and her family behind her back. The dean tells her she couldn’t come around. His advice is to have someone else pick Henry up from school. Don’t worry, we’ll take care of him. He’s a child so he’s obviously innocent, even if his dad is a murderer. But not you, his wife—you should have known.

Of course he doesn’t say this, but it’s implied. It’s implied in the gossiping and whispers of the other parents. But is it justified? Is it reasonable to think that a wife should have known what her husband was doing, if we presume that he did kill Elena? Should she have known that he’d been fired from his job and was cheating on her?

In the sense that it was wrong for Jonathan to deceive her, I would certainly agree that she “should have known.” But when it comes to how she is treated by others in The Undoing Episode 2, I would have to say that the position is deeply unfair. Grace would seem to have been Jonathan’s victim, not his accomplice, and the actions of her peers and the police only further the wrong being done to her. If she seems to take it well, this is only insofar as she continues to assert to herself that nothing is actually wrong, but this has clearly changed by the time “The Missing” ends.

With all of this, though, I have been proceeding under the hypothesis that Jonathan is guilty of murder. He may not be, but regardless of what he’s done, The Undoing should get us thinking about our human tendency to jump to conclusions of guilt by association. And of course the culture of the Upper East Side doesn’t help. Whether Grace knew or not, and whether Jonathan is guilty or not, the whole thing is just so unseemly. The police want to talk to Jonathan and can’t find him. So let’s all jump to the conclusion that he killed this woman. Why else would he be missing? Surely he must have done something wrong.

And so when Grace is advised to stay away from the school, this is making explicit something that they all think she should have known implicitly—she shouldn’t be willing to show her face unless and until this is all cleared up. In this context, the appearance of an offense is almost as bad as an offense itself, if people are even willing to mark a difference.

Jonathan did do something wrong. Even he admits this when he accosts Grace at their beach house towards the end of Episode 2. But he insists it was limited to cheating on her. He insists that Elena was a crazy stalker who got him fired without good cause, that he got her son Miguel into Reardon in the hopes that this would make her go away, but that he got worried when he learned she’d become involved in the fundraiser committee, and so on.

None of this adds up. As much as Grace wants to believe him, his story doesn’t make sense, not to mention that even if we believe him, that means he came home from having sex with Elena, got into bed with Grace, allowed her to console him (thinking that a young cancer patient had just died on him), and then had sex with her.

We saw the last part of that in Episode 1, and it was framed in line with Grace’s point of view and her belief about the dying child. How do we go back now and revise our memories? How do you avoid jumping to the conclusion that you simply cannot believe a word this man says? And how would it make you feel if, instead of just feeling like he was a good fellow for the course of one episode of a TV program, you’d been married to him for a decade?

What kind of monster is Jonathan? How monstrous is he? His appearance at the beach house is presaged in a way reminiscent of horror, as Grace senses small movements out of the corner of her eye. Did we see Jonathan on the beach for a second? What was he doing and where was he hiding before he decided to confront Grace on the veranda? And just how threatened does she feel in the final scene? Just how threatened should she feel?

I think there is a good chance that Jonathan did not kill Elena. I want to believe him about that, and I think Grace does too. But in a sense that doesn’t matter insofar as their relationship (and not just their marriage) has already come undone. There is no way she can trust this man again, whether he’s a murderer or not.

His story doesn’t add up no matter how much you choose to believe him. Why, for example, did he put forward the lie that he was going on a trip to Cleveland well in advance of the events the night of the fundraiser? But then if we go in the other direction, we’re led to the thought that he planned to kill Elena that night and disappear in the morning, which really doesn’t track with his behavior. At least, if this was a plan, it was a very bad one. So, no, it does seem more likely that he has been improvising since Elena’s murder (whether he did it or discovered her body and ran away as he says). But if that is the case, then what was his original plan for which the fake trip to Cleveland was meant to be the cover story? And, either way, why has he chosen to reveal himself to Grace now, after a day has passed, which amounts to turning himself in to the police? Why not do that sooner? And where has he been? Surely the cops checked their vacation property.

Whatever the real story is of what happened with Elena and what Jonathan has done, it seems clear that it will be more complicated than the simple conclusion that he killed her. Yet I expect that will be the line the cops push in The Undoing, and that they will not be too concerned with the other smaller questions that are harder to answer. They want a conviction, after all, to close the case. But it is those smaller questions, along with the character drama of the show, that will keep me coming back to see how The Undoing unfolds. Let’s see how much more things fall apart next week.