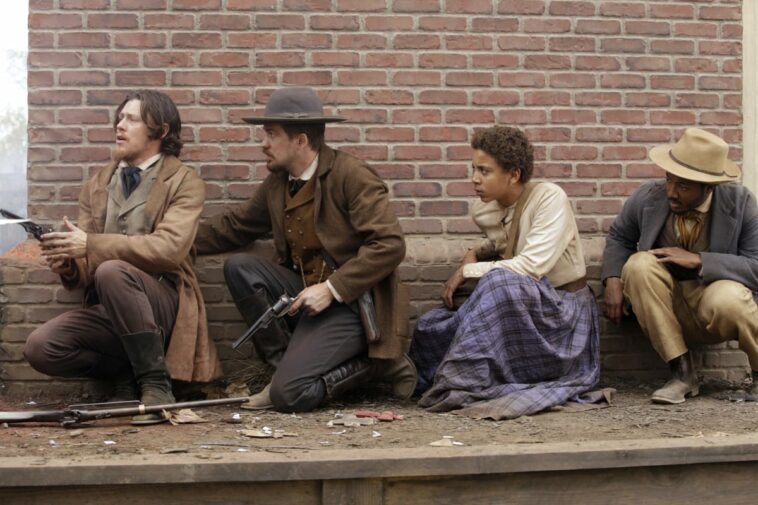 The penultimate episode of The Good Lord Bird, “Jesus is Walkin’”, somehow is able to pull off the trick of being both the funniest and the most tragic episode of the series so far. The Rail Man dies. The bees aren’t hiving. The standoff at the armory leads to death and failure. By the end even the most faithful members of the crew believe the cause is lost while a whole bunch of others lie dead.

The episode starts just after the events of “Hiving the Bees”. Onion (Joshua Caleb Johnson) arrives back at the house in Harpers Ferry, but is too late. Only Owen (Beau Knapp) is still there as John Brown (Ethan Hawke) and the rest of the crew have gone to attack the armory. Owen has stayed behind to guard the house and meet up with any people arriving to join the cause (the bees) but he also seems sick and disillusioned.

Knapp’s Owen has always been the most critical of his father, the most practical, and the most taciturn, but here he turns far sadder. During the interaction with Onion Owen barely moves, his face is white and ashen and he says to tell the others that he will bring flowers to their graves. Knapp seems throughout the scene like he is the one who is dying. I even went back to see if Owen had been shot or something, but found no evidence that I’d missed anything important along those lines. It seems that it is anxiety and foreboding that are overwhelming him.

With all of the air taken up by the big performances by Ethan Hawke and Daveed Diggs (and the time given to and the delicacy of Johnson’s portrayal) there wasn’t a lot of time to spotlight the Brown boys, but Knapp really delivered every time he was on screen. He made a character that could have been just a series of funny lines and hat tips really feel like a fully realized person. Throughout this scene he barely moves until he completely breaks down crying at the end. Onion seems to be shocked that Owen could be taken down so far.

But Onion can’t stay with Owen and guard the weapons, or run away to safety. He may be “free to die where he chooses” but he also realizes that no matter how unlikely it is that they will succeed, they have almost no chance at all if he doesn’t give the password to the Rail Man (Orlando Jones). But he doesn’t make it back in time. As Onion runs up toward the train yelling out, “Jesus is walkin’!” the Rail Man is already talking to Jason Brown (Jack Allcott), and since the password isn’t coming, he isn’t going to unload the men he has brought with him.

Jones gives one more sinister look at the son of John Brown, blows out his lantern, and turns away. At which point Jason shoots him in the back. As Onion sadly intones, “the first man killed at Harpers Ferry was a colored man, Heyward Shepherd.” Shepherd we later learn did actually hive the bees, the train was full of men armed and ready to join the cause, but with his death they escaped out into the night.

The Rail Man really did turn out to be the ominous figure that I feared he would be, the mythical trickster god strikes at the worst possible moments. The same figure who could have delivered salvation instead causes the doom of the entire operation. With the $500 payment still in his pockets as he lies dead in his own blood, no longer even available for a gift to Charon. And with his death the ominous end of the ill fated attack on the armory is all but assured.

Jason and Onion meet up with the others at the armory which, somewhat remarkably, has been taken with ease. The thousands of guns are in their hands and they could immediately load everything up and escape into the mountains as planned. But Brown is not interested in escape, he is interested in revolution and for that he needs the “hived bees” that are now never coming. In the first true demonstration that Brown is in fact insane he refuses to listen to any reason.

He believes the men will still come, even after Onion and Jason confess that the Rail Man is dead. Hawke plays it all with his usual sense of decency and longing, but something has broken already in the “old man”. Perhaps he knows this has to be a suicide mission to be successful, or perhaps he really believes God will present him with his army. Either way his decision to stay at the armory and wait will devastate them all.

It isn’t all just sitting around waiting for the fight to come at the armory though, Brown does send John Cook (Rafael Casal), Bob (Hubert Pont-Du Jour)  and Onion out to go round up some more supporters. Onion, due to his somewhat disastrous rallying, only knows of a few potentials in the area. So they go to visit the Coachman at Colonel Washington’s estate. The Coachman (Victor Williams) has in fact rallied to the cause and when they arrive he has taken the good Colonel captive.

Back in the carriage, Washington is a fool, in both personality and function in the story. Brooks Ashmanskas plays Washington as a ridiculous caricature of a southern plantation owner. Washington is all drawling babble and empty threats and is easily used by Cook as part of a plan to get back into the armory. The entire scene is hilariously staged, Washington whimpering and simpering as Cook and the Coachman take easy control over the situation. The Good Lord Bird has been one of the funniest shows of the year for the entire run. I think the strong emphasis on farcical humor may be the reason the show hasn’t caught on entirely among audiences.

During the carriage ride with Washington back to the armory the group is attacked. During the tussle Bob tells Onion that he can’t return to the fight and leaps from the moving carriage into a river. Especially if this is the end of his role in the story, I’m unsure as to what to make of Bob. Pont-Du Jour seemingly plays Bob as a commentary of the ridiculousness of everything around him, his reactions to some of Brown’s speeches are among the funniest moments of the series. But he also seems to have been playing a bit of a mentor role for Onion, trying to get him to learn and grow and change.

It seems that Bob’s decisions in the story were never really his own. He didn’t choose to be with Brown in the first place, he only reluctantly came on this ill-fated raid, and now, for the second or third time, he is giving up entirely. It seems the character never really had a significant arc or thematic reason to be in the story, which feels like a waste of one of the funniest and most potentially tragic of all the characters.

In “Jesus is Walkin’” the dichotomy between comedy and tragedy is profoundly obvious throughout. The script by Mark Richard and Erika Johnson is by turns tragic and hilarious. In addition to the Washington scene there is an exchange later in the episode between Brown and the town’s mayor that is a masterpiece of comedic timing. The mayor attempts to get one of Brown’s men to give up by bringing in a fancy lawyer and a letter from the man’s family, Brown continues to answer his questions, each time opening the little window of the door and peeking out.

The dialogue snaps back and forth between the two and, in the midst of all the carnage and outrage, it’s brilliantly hilarious. Until the man finally answers that no, he will not give up. At that moment the show turns again instantly to tragedy. Brown has his sharpshooter kill the lawyer, Brown’s man is killed by a gunshot through the eye and the mayor falls as well. Comedy and tragedy are kept in balance and the standoff goes on, even more violent than before.

Katherine Woods’s direction ties a lot of the elements together in an interesting way. “Jesus is Walkin’” has a much more straightforward style than many of the preceding episodes but I think that serves it well. The direction allows for the comedic moments to snap and the sad moments to linger in a way that may not have been possible had it been showier.

When Cook, Onion, Washington and the other of Washington’s slaves who decided to join the cause arrive back at the armory the disaster at Harpers Ferry is in a bit of a lull, but clearly things have gone very badly. The US Army arrives and takes over negotiations and things continue to get worse and worse. Finally Brown is convinced to attempt a prisoner exchange, which he hopes will double as a way to escape. So Cook and Jason take one of the female prisoners out of the armory to safety. But, once she is out of range, the troops fire on Cook and Jason, killing Cook instantly and mortally wounding Jason, who barely makes it back inside to die in his father’s arms.

These two character deaths provide an interesting perspective through which to reflect on the historical inaccuracies and dramatic license taken by the show. John Cook’s death in this moment means he gets to die a hero to Brown’s cause. Whereas the real John Cook was eventually executed as a result of the Harpers Ferry raid but there is a long time of escape and wandering before that happens. And all of it is increasingly unfavorable to Cook.

I find it a bit odd that the notorious Cook gets this sendoff instead of his real life demise. Similarly, two of Brown’s sons did die during the raid, but as the show has renamed and combined several of the sons to make the characters we love, it is hard to tell which son Jason represented. It is also true though that Dangerfield Newby and many of the other followers did die in the fighting. Here is a list of the real life fates of many of the members of John Brown’s crew.

None of this is necessarily bad, but it is interesting when the show decides to be true to history and when it decides to make changes. Dramatic license exists in historical fiction because real life doesn’t adhere to a narrative structure and we need that structure to tell compelling stories. That was the ultimate goal of James McBride’s novel and is the goal of the show as well. In the end it is best to remember the words of the title card at the beginning of each episode “All of this happened. Most of it is true.”

Even now after all the death and destruction he has caused, I still root for Brown. He is clearly unhinged, unable to see reason and leading all of his men to certain death. Yet, I still find Brown’s cause to be noble and his methods to be necessary. Part of this is that Hawke’s performance remains remarkably well rounded. He plays the quieter moments with just as much energy and commitment as he plays the wild and violent moments. Sometimes these moments come back to back within the same scene.