While many of you are basking in the glow of your new Xbox Series X or your PS5, the rest of us with slightly less disposable income are chipping away at our ever-expanding gaming backlog. It’s Episode # 31 of We’re Just Playing!

The sheer number of games on my PS3 alone that I’ve yet to touch is staggering, and the PS4 (while not as bad) grows as well. However, I can’t think of another gaming system where I’ve mounted such a daunting backlog quite so quickly as I have with the Nintendo Switch. 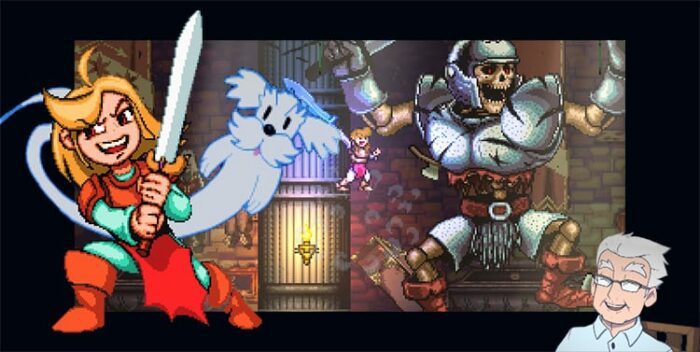 Every week there are fanastic eShop deals, staggering price drops, and sticker prices so insanely low you can’t help but pull the trigger of several of them each week (I mean you probably could, but I can’t). A lot of times they are disappointing let downs, shovel-ware dressed up to deceive the buyer into thinks the final product is of a quality that it isn’t. But other times, you stumble upon hidden gems, flawed gems for sure, but worth you time (especially at their low prices). Last week I found such an interesting gem.

One part Ghouls ‘n Ghosts gameplay, one part The Princess Bride, and all tonal whiplash, Battle Princess Madelyn: Royal Edition is hard to peg—initially. I purchased it based on the trailer and it’s Capcom style action-platformer gameplay and graphics.

The game begins with a weird animated sequence that made me question what kind of game I was playing. Was this a game for adults or children? The animation seemed geared for very young children. Immediately following the animation, you are treated to a very The Princess Bride-like structure to the plot. Madelyn is home sick, and dear old grandpa has shown up to read you a fantastical book of adventure. This also feels somewhat kid-centric as well, and I was almost convinced I had gambled and lost on my impulse buy.

Doing some research, I discovered this was a Kickstarter game created by Christopher Obritsch who made the game for his own daughter, Madelyn, after a conversation with her regarding Ghouls ‘n Ghosts. The game is also dedicated to his father, who is the clear inspiration being the grandpa character in the game.

You can play either Arcade or King Daddy (hard mode with a different character) mode, and if you want the G ‘n G experience, either mode will do. These are linear modes where you will see things such as a very familiar looking level map (you can almost hear the music in your head) and character models meant to invoke the ghosts ‘n goblins of the 8 and 16 bit era.

Interestingly, the Story Mode that was originally included (and turned the game into a Metroidvania style game) has been completely removed from this version, as fans of the game found it confusing, glitched, and buggy. The creator himself said the Story Mode evolved into something that it was never intended to be, and thus it was extracted. The PS4 has the non-Royal Edition available should you be interested in checking it out.

Random weapon and armor drops allow you to test out different play styles. All told, there are 10 different weapons that can be combined with 3 different armor types to create different combos and effects. Daggers can become powerful when powered up, while a sword that shoots flames is nothing to sneeze at either. All of this is very familiar to anyone who played brutal Capcom games, and fans will recognize and embrace the smooth gameplay and presentation in Madelyn.

One of the nice quality-of-life features in this game is that Madelyn can change direction once she jumps (or double jumps), meaning you no longer have to “fully commit” to jumps the way the Arthur had to lo those many years ago.

The game is not without its issues however. Often times it is difficult to distinguish between the foreground and background. Enemies will peer out from behind trees and then emerge forward into the playing field, leading to more than a few cheap hits. There is a difference between being an alert gamer and having to constantly—and frantically—scan every part of the busy screen.

I have also read this game was quite buggy upon its first release, and that the Royal Edition has made strides to correct a lot of them. While I haven’t completed the game, it certainly is scratching my itch for old school platformers at the moment, and should I encounter any game breaking bugs (especially in a supposed enhanced edition), low price tag or not, I will be disappointed.

With the PS5 finally arriving, I am rushing to finish staples from previous generations as well. Uncharted and God of War are near the top of the list. Lately I had to take a break from console gaming due to my PS4 being in storage. In the interim, I am attempting to finish Freedom Wars on the Playstation Vita.

Freedom Wars is an action role-playing game, similar to the Monster Hunter genre, that had a chance to be a staple for the Vita. Unfortunately, Sony stopped caring about the Vita and Freedom Wars did not hit in the USA. Is it a good game? It is at times. Should it be in the conversation with games that define the Vita? I think so. 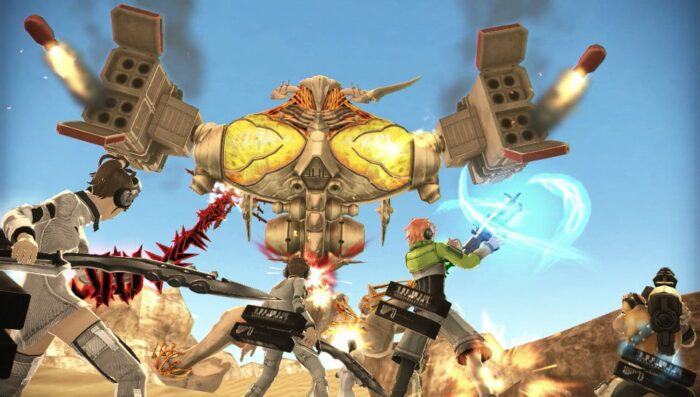 I originally stopped playing Freedom Wars because of the difficultly. The balance is perfectly paced for the first half. Then, out of nowhere, the difficultly ramps up. Which is a shame because there is a lot to enjoy with Freedom Wars: the music, the voice acting, the atmosphere, the gameplay, and the story.

The other main flaw is the convoluted weapon upgrade system. I do not mind putting in the effort to master a game, but too often this game felt like studying for an exam in order to figure out certain aspects.

Thankfully, I reigned victorious over a few incredibly hard bosses. I got that feeling the South Park kids must’ve had once they defeat the powerful mage in World of Warcraft. I can finally play the game again. Moreover, I want to.

Another flaw I have heard regarding Freedom Wars is that the story is incomplete, and it does not look like Sony will make a sequel anytime soon, so for the time being this is the story as we know it.

Ultimately, I am glad I returned to Freedom Wars. So much so that I am attempting to get the platinum trophy which I tend to only do for games that I have genuinely loved playing. I feel it is worth checking out for Vita fans especially since it bears a low-price tag.

Shockingly, there are still gamers playing Freedom Wars online. It is not guaranteed you will find a room every time, however. Playing with friends makes certain missions much easier, but it is not necessary. If you are interested in multiplayer, I highly suggest searching for the Freedom Wars Discord server and forum threads on PSN Profile to organize a time to play.

Collin Henderson – Cadence of Hyrule DLC: Symphony of the Mask

This week I’ve been diving back in to Cadence of Hyrule: Crypt of the Necrodancer Featuring The Legend of Zelda between bouts of working on my NaNoWriMo project, although it’s not to replay the base game. No, back in the beginning of November, I remembered that there was Story DLC for the game based around playing as Skull Kid, and that it dropped in the middle of October. After absolutely kicking myself in the pants for forgetting about A.) playing just about my favorite villain in gaming, and B.) playing a game based around masks around Halloween, I fired the game up and dove in.

And my God, did I get my butt handed to me. The base game of Cadence of Hyrule is based around the mechanics of the beloved rogue-like Crypt of the Necrodancer, where you must move in time to the (awesome) soundtrack and dodge according to the enemy patterns you’re up against. It’s a fantastic twist on the classic Rogue gameplay, where you move on a grid and enemies only move when you move. And I love the base game. It successfully lifted classic Zelda items, locations, weapons, songs, and storylines from the series and attached the rhythm based mayhem of CotND to form an insanely enjoyable package. I will say, though, that the game was pretty easy. Up to that point, I hadn’t played CotND, so I wasn’t familiar with the mechanics, and I died maybe once during several playthroughs.

That’s not the case with the Skull Kid DLC, titled Symphony of the Mask. The expansion (and I do feel that calling it an expansion is appropriate considering how much new stuff it adds) explores a what-if scenario where Ganon succeeded in taking over Hyrule, and Link and Zelda are nowhere to be found. It’s up to Skull Kid to save the day, and instead of discovering new, more powerful weapons, you find masks that can be changed on the fly that give you a new weapon and special ability (for instance, the Goron mask turns you into a boulder that flies across the screen). Mechanically, it’s not terribly different from the main game. It just has a cute story about Skull Kid becoming a hero. 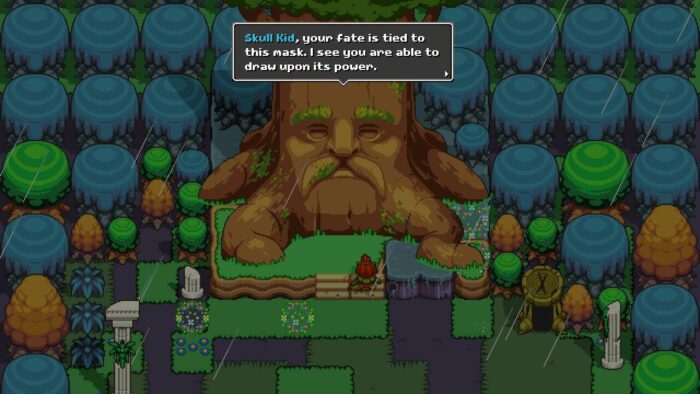 The thing is that this is an expansion that assumes you’ve not only beaten the main game, but mastered it. There are more enemy varieties than in the main game, and each screen on the overworld is absolutely swarming with baddies that all want a piece of you. Not only that, but the world is smaller and to the best of my knowledge, there are fewer heart containers, meaning that you have less overall health, and they do way more damage than in the regular game. It demands a mastery of the CotND mechanics, meaning your eyes have to be everywhere on the screen at once and you need to be thinking three dance moves ahead and know the tell for every single enemy type. Remember how I said I died maybe twice in the base game? I’ve probably died around thirty times in Symphony of the Mask¸ and I’ve only completed one of two dungeons.

That’s right, there are only two dungeons to beat in the game’s story mode, meaning that the overworld is smaller too. It’s a more compact experience for sure, but the game makes you fight for every single inch of progress you make. It’s a nice marriage of the more punishing nature of CotND with the structure of classic Zelda titles, but my God was I not ready for it.

Still, I adore Skull Kid, and I love that the DLC is a nod to his past as the villain of Majora’s Mask, which is my favorite game ever made. He’s a great character and doesn’t get anywhere near the amount of love he deserves, so getting the chance to play a story centered on him is fan service of the highest order for me.