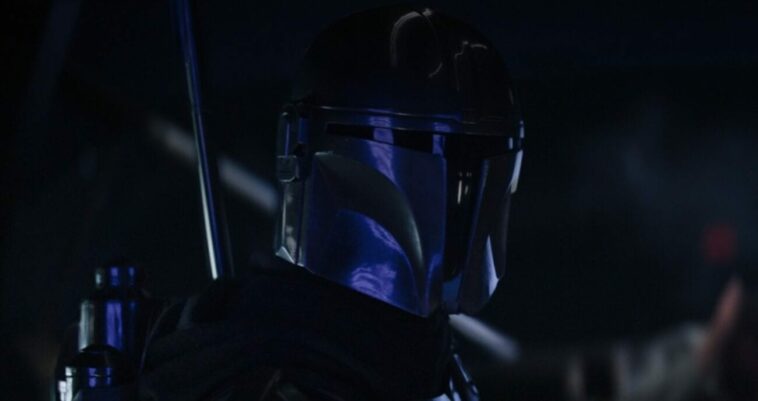 Greetings from a galaxy far, far away! This week, we continue our journey with Din Djarin (a.k.a., The Mandalorian) and Grogu (a.k.a., The Child), as I review and analyze The Mandalorian S2E8, “Chapter 16: The Rescue.” This episode, the Season 2 finale, sees the culmination of a two-year story arc, and sets up threads for the future. It also contains some major surprises.

As with all parents, Din knows he will eventually have to let Grogu go, so his child can ascend to greater heights than Din could take him. In S2E6, we saw Grogu enter a trance at the Jedi Seeing Stone. We wondered if he made contact with a Jedi. We now know that he did. When a Jedi comes to save the day, Din knows this is the moment when he must let Grogu go. Though Din doesn’t want him to leave and Grogu is scared to go, Din knows Grogu must go with the Jedi. It is the only way he can get the training Din could never provide.

The final scene is heartbreaking, despite the hope for Grogu’s future. Din’s sadness comes through, even with his helmet on. Grogu reaches for his masked face, prompting Din to do something he never thought he would willingly do. Din removes him helmet. We did see him remove his helmet in S2E7, but he had no choice. Without removing his helmet, he would never find Grogu’s location. We don’t know whether or not Din will ever be able to go back to his creed, which states that if he takes his helmet off, he can never put it back on. We do know that his devotion to his child has outgrown his devotion to this creed. I think more than anything, he wants to ensure Grogu gets to see his face at least once, so he will recognize him in the future.

Din promises Grogu that they will see each other again. That meeting may be next year, it may be years down the road, or we may never see it on screen. For now, at least, the story of the Mudhorn Clan has come to an end. Both characters are ready to start down new paths. Din seems destined to focus on restoring Mandalore, while Grogu prepares to learn from the Jedi who rescued him.

That Jedi, of course, is Luke Skywalker. Earlier this season, when Ahsoka suggests Din take Grogu to the Seeing Stone to see if he can make contact with another Jedi, I never suspected Luke would actually be that Jedi. We knew Luke was likely the most powerful Jedi out there, but I thought Jon Favreau and Dave Filoni would opt for someone else. I assumed Ezra Bridger was most likely. I thought a Jedi we had never before seen was a possibility. Maybe they would bring some version of Mara Jade into cannon. When the X-Wing first appears, though, I knew I was wrong.

It was great to see Luke in action. We got to see the Luke I have wanted to see since the credits rolled on Return of the Jedi back in 1983. We finally again got to see a heroic Luke Skywalker, this time at his peak. There is no doubt Luke is stronger than we have ever before seen. He makes easy work of the Darktroopers (and with his green lightsaber!), to save Grogu, Mando and the crew. This is the Luke we should have seen in the sequel trilogy—a true hero, not a bitter old man who ran away with his tail between his legs, leaving the galaxy to its fate. I am not sure how much more we will see of Luke in the future, but if Favreau and Filoni are guiding his story, I hope it’s a lot.

I do have one worry about bringing Luke in as Grogu’s mentor. Rian Johnson painted Luke as a failure, who seemingly never successfully trained a Jedi. Could this mean Grogu never achieves his potential? Will Grogu end up among the padawans Kylo Ren kills when he destroys Luke’s academy? I will just have to trust that Favreau and Filoni will continue to deliver on the stories they tell, and Grogu will find a better life ahead of him.

The Mandalorian S2E8 sets a new path for Din, and perhaps for all Mandalorians. We knew from earlier in the season that Bo-Katan was seeking to regain the Darksaber. Doing so would allow her to once again claim the throne of Mandalore. Without it, she felt she would not have the backing of her people. In this episode, she agrees to help Mando rescue Grogu, on the condition that Moff Gideon surrenders to her and she gets the Darksaber. Mando agrees to let her have it.

What Mando doesn’t know is that in order for the holder of the Darksaber to gain the backing of the people, the holder must have won it in combat. When Mando fights and defeats Gideon, he becomes the rightful holder of the saber. Bo-Katan will not and cannot accept it if is freely given. Her hopes of gaining the saber are seemingly dashed.

This unexpected development opens some interesting possibilities for the Mando’s future. Will he become the leader of the Mandalorians, especially if he abandons the Children of the Watch for more mainstream Mandalorian beliefs? Will he surrender it to someone else so that Bo-Katan can again try to claim it? Or, will Mando and Bo-Katan become rivals or even enemies?

In my article for S2E1, I talked about how everything is canon…until it isn’t. This episode seems to show another case of changing cannon. In Star Wars Rebels, when Bo-Katan takes the Darksaber and becomes the ruler of Mandalore, she doesn’t win it in battle. Sabine Wren freely give her the saber, as Clan Wren thinks Bo-Katan is the best possible leader for Mandalore. If the saber could be handed to her then, why couldn’t Mando just give the saber to her now? Again, Lucasfilm may eventually find a way to explain this, but it seems like a significant contradiction.

Rise of the Empire

In The Mandalorian S2E8, Moff Gideon makes clear he believes he is fully positioned to restore the Empire. He has his Darktroopers, he has the Darksaber, and most importantly, he has enough of Grogu’s blood to accomplish what he has been working toward. In S2E4, we saw cloning tanks, while “Snoke’s Theme” played in the background. It seems clear Gideon is working on trying to either bring back the Emperor or create a suitable replacement. Perhaps Gideon will eventually create Snoke and give life to the First Order, or perhaps his research will lead to the eventual cloning and return of Palpatine in time for The Rise of Skywalker.

Another possibility is that Din Djarin has derailed Gideon’s plans enough to delay the return of dark days. At the end of The Mandalorian S2E8, Gideon is in Marshal Cara Dune’s custody. The Darktroopers are destroyed. Bo-Katan has taken Gideon’s command ship for use in her plan to retake Mandalore. Dr. Pershing, Gideon’s cloner, is presumably also in custody. Are Grogu’s blood samples on board his ship? If so, are they lost to the Imperial Remnant? It is possible that Gideon was on the verge of returning the Emperor, but Din and his crew have pushed that timeline back 25 years.

Even with Boba Fett taking a somewhat auxiliary role in The Mandalorian S2E8, we still learned more about him. Earlier this season, we learned that Jango Fett was indeed a Mandalorian, as he was a foundling just like Din. In this episode, we learn that Fett is well known by Bo-Katan and Koska Reeves. They know he is a clone, and they call Jango his donor. They also adamantly say he is not a Mandalorian. Boba responds, “I never said I was.” There is clearly bad blood between Boba Fett and Bo-Katan’s Mandalorians. It will be interesting to see if this is fleshed out further in the future.

Hopefully, you watched The Mandalorian S2E8 all the way to the end. For the first time in the series, the show included a stinger (post-credit scene). My first clue was when there was no concept art during the end credits (also a first). Then, I noticed that the credits included one for Matthew Wood as Bib Fortuna, Jabba the Hutt’s majordomo from Return of the Jedi and The Phantom Menace. I wondered when Bib Fortuna had been in the episode. I then wondered how he even survived the destruction of Jabba’s sail barge. Finally, I realized there must be another scene.

In a riff on Luke’s entrance to Jabba’s palace, we see Boba Fett and Fennec Shand enter the same palace and take it over. Bib, who has obviously given into excess, becomes immediately nervous when he sees Boba Fett, pleading that he thought Fett had died. Boba kills Bib and takes his throne, with Fennec at his right hand. The scene then fades, and we see “The Book of Boba Fett”…”Coming December 2021”.

Last week, I questioned why there was no announcement about a Boba Fett show, given that it was one of the worst kept secrets in Hollywood. We now know that there is indeed a Boba Fett show on the way, but we don’t yet know the form. Will it be an on-going spinoff, an event series (mini-series), or something else? At last week’s Disney investor meeting, Kathleen Kennedy implied, although I’ll admit it wasn’t totally clear, that The Mandalorian story would continue next Christmas. That is when this show is coming. Does that mean Season 3 of The Mandalorian morphs the series into “The Book of Boba Fett”? Does that mean the first two seasons are “The Book of Din Djarin”?

This week, Jeremy Bulloch passed away. For those who don’t know, he was the original Boba Fett. Mr. Bulloch played Fett in both The Empire Strikes Back and Return of the Jedi. In The Empire Strikes Back, he had a second role, playing an Imperial office named Lt Sheckil. His third Star Wars role was as Captain Jeremoch Colton, the pilot of the Bail Organa’s ship in Revenge of the Sith. Although Boba Fett was voiced by a different actor (originally Jason Wingreen, but later replaced by Temuera Morrison), his physical performance lives on.

In The Mandalorian S2E8, Boba Fett says that the Empire reduced Mandalore to glass. While we knew that Mandalore was said to be destroyed, Bo-Katan previously told Din not to believe everything he hears. The question of whether or not Mandalore is truly uninhabitable seems to still not be answered.

Memorable Lines from The Mandalorian S2E8

The Mandalorian S2E8 “Chapter 16: The Rescue” is an amazing and surprising episode. It is also a satisfying conclusion to the story of Din Djarin and Grogu, at least as far as we have seen it. Granted I am a bit biased, but I truly believe this is the best show on TV right now. Whether the show continues Din and Grogu’s stories or switches to focusing on Boba Fett and Fennec Shand for a while, I look forward to the next chapter, or book perhaps, in this corner of the Star Wars universe.

If you have comments, theories or other easter eggs I didn’t mention, please leave a comment below. I’d love to hear your thoughts.

This is the Way.

Todd Giammo is a long-time Star Wars fan who happens to also love watching or talking just about anything science fiction, fantasy or animation. Some of his other favorites are Lord of the Rings, DC Comics, Babylon 5, Futurama, The Cosmere and Looney Toons. Sometimes, he cringes when he thinks about how much he has spent on Star Wars toys over the years. Outside of movies and TV, he likes disc golf, board games, performing improv and the forest.