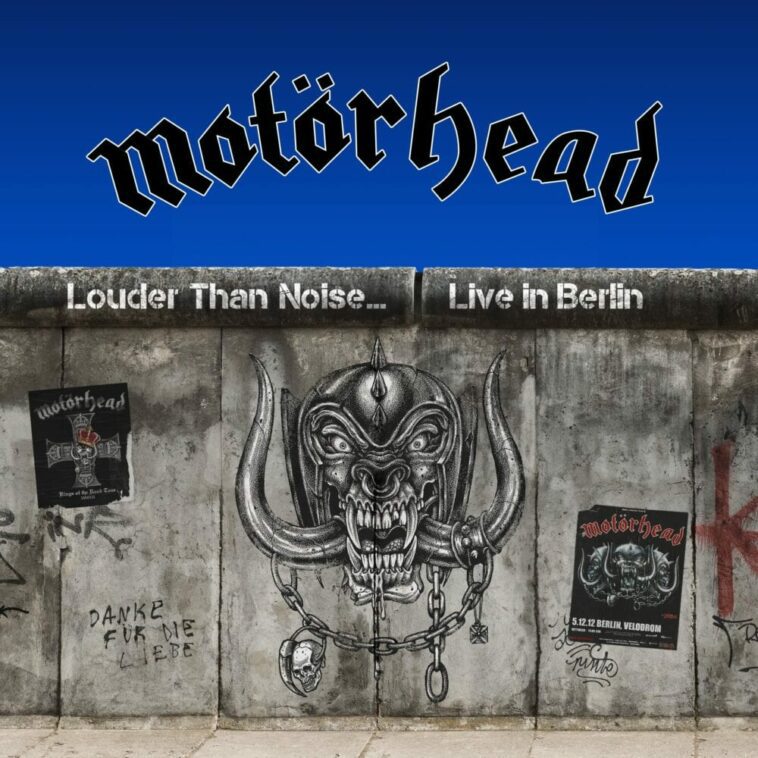 I love Motorhead. I make no bones about it. They have been such an integral part of my existence since I was an ‘orrible little ‘urbert that it’s safe to say it wouldn’t be half the man I am today without their music soundtracking my life. So, you can imagine how much of an adrenaline rush it was to open my email the other morning and find a press release announcing a new album was on its way. And better still, it’s going to be live.

Louder Than Noise…Live in Berlin is set for release on April 23rd, 2021, and if the lead single, “Over The Top” is anything to go by, it’s going to be such a blistering record that you’re going to need fire insurance for whatever device you choose to play it on. From the first roar of Phil Campbell’s guitar to Lemmy and Mikkey Dee slamming in a brutal rhythm, all topped off with Mr. Kilmister’s trademark growl, “Over The Top”  is three minutes of balls to the wall rock n’ roll that reminds you that nobody kicked out the f*cking jams harder than Motorhead. The crowd in attendance laps up every second of it as well and according to the press release, Louder Than Noise…is a tribute to the love affair between Motorhead and Germany. Recorded in 2012 at The Berlin Velodrome and produced by Cameron Webb, Louder Than Noise…promises to be “a welcome reminder of what real rock ‘n’ roll is truly about”

And just a glance at the track listing is enough to get the mouth watering. There are 15 songs in total and not a dud among them and with the likes of “Metropolis” and “You Better Run” rubbing shoulders with the classics “Killed By Death”, “Ace Of Spades”, and “Overkill”, I know that I, for one, will be slamming around my house on release day, trying hard not to crush my kids in my one-man moshpit.

Lemmy once said that if Motorhead moved in next door to you, your lawn would die and anyone who ever saw them play will testify to that. A Motorhead gig was akin to having your face ripped off by a sheer wall of glorious sound that then spent the rest of the evening dancing around in front of you, wearing it as if it were some kind of sacrificial mask. They were one of the very few bands who were just as awesome on-stage as they were in the studio and there has always been the belief that if you didn’t catch a show, then you didn’t really get the full-on Motorhead, face-ripping, experience. Well, now you can. I am so unbelievably sold on Louder Than Noise…just off the back of one single that I’m already convinced it’s going to be my album of the year and the closest you’ll ever get to a Motorhead concert without actually being there. This also makes me very sad, as it’s a reminder that we’ll never see these three incredibly talented musicians share a stage together again.

Louder Than Noise…Live in Berlin will be available worldwide on April 23rd, 2021 across all platforms and where you choose to stream. You can also pre-order it from here, on CD with a bonus DVD, Double Vinyl Gatefold, and (my favorite if anyone fancies buying it for a starving writer) Boxset which includes the CD, DVD, Albums, and a Motorhead Branded Passport Cover.

The Grandmaster of Asian Cinema.