Note the title of WandaVision’s ninth and final episode: ‘The Series Finale’. Series. Not season. Series finale. Writer and show-runner Jac Schaeffer goes into the ending of Marvel’s experiment with a conclusion in mind, if such a thing exists in the Marvel Cinematic Universe.

Herein lies the curious paradox of the MCU and why some will undoubtedly leave ‘The Series Finale’ frustrated. WandaVision, in classic Marvel style, becomes determined to have its narrative cake and eat it. What many believed would be a cathartic goodbye to The Vision or—certainly after last week—the origin story of the Scarlet Witch, ends up being both and neither of these things in one. While we are left with no expectations of a second season of the show, and by all accounts one is likely not in the offing, everything established here is simply the first part, or ongoing part, of a broader story likely to overlap into Doctor Strange and the Multiverse of Madness, Captain Marvel 2 and even Secret Invasion—movies and TV shows all.

We’re about to reach a fascinating point in how Marvel deals with this, with the Disney+ era of the MCU’s breadth expanding into what ought to be termed an MTU (Marvel Television Universe), and in a sense WandaVision in its entirely has been a giant meta-commentary on precisely how shows such as this are continuing the audiences’ transition into a new era of entertainment. WandaVision after all, from soup to nuts, has been a self-aware deconstruction of changing television eras through Wanda’s artificial prism of situation comedy—given narrative weight in ‘Previously On’ as part of her backstory—but equally it was designed to service WandaVision’s broader point: how we digest television, how we digest story, is in serious flux. 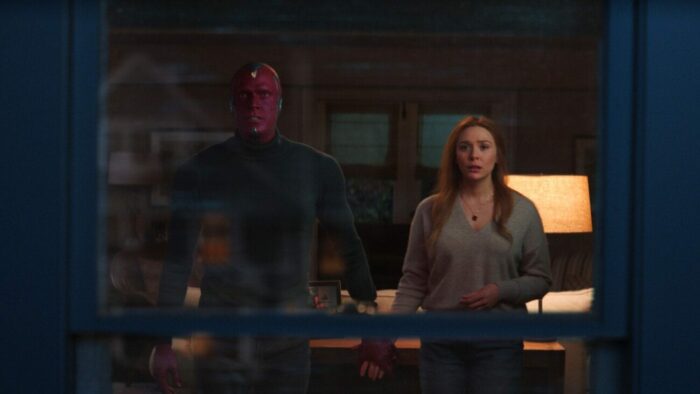 The MCU’s hybridisation into television via one of the most dominant streaming services on the planet continues a transition that has been underway for over a decade: the subsuming of the mid-budget movie into expensive, prestige small screen entertainment. Game of Thrones was the vanguard for this, a show that proved you could spend $50 million on a ten episode season and see a return bigger than spending $80 million on a single movie. We have since seen a litany of projects that would twenty years ago have been major tentpole pictures, or perhaps trilogies, work as high concept, lavish television projects: Westworld, Lovecraft Country, Fargo, True Detective, and Outlander to name a few. Not all are prestige quality but every single one is designed, explicitly, to convey big screen scale on a small screen canvas.

Marvel are taking this one step further by actively transplanting cinematic characters, and A-list actors, onto a television canvas. Elizabeth Olsen and Paul Bettany, let’s not forget, play a key role in Avengers: Infinity War, one of the biggest blockbuster films ever made, eclipsed only perhaps by its bedfellow Avengers: Endgame. We will soon witness Tom Hiddleston, an actor of cinematic repute, headline Loki, and Jeremy Renner as Hawkeye in the show of the same name. Samuel L. Jackson, one of the biggest movie stars in the world, will headline his own series (consider how remarkable it felt to see him appear in an Agents of S.H.I.E.L.D. cameo in 2014). Some wondered if Benedict Cumberbatch might appear as Stephen Strange in WandaVision and few would have been surprised to see it happen.

Film stars moving into television is nothing new. We have seen the steady overlap of both school since the turn of the millennium, as Quentin Tarantino appeared on Alias, for example, or Kiefer Sutherland carved out his most iconic role on TV in 24. Nowadays we even see Meryl Streep, the doyenne of American cinema, appear on shows such as Big Little Lies. Nevertheless, Marvel are not simply transplanting world renowned actors but also famed cinematic characters onto these canvases. There are rumours Mark Ruffalo may appear as Bruce Banner in 2022’s She-Hulk, for example. If true, audiences would likely nod approval and understanding rather than gape in shock. This is how far we have come, and will continue to go.

The MCU, therefore, is spearheading the continued confluence of two forms of entertainment that were, for decades, wildly different in style, approach, budget and certainly regard. The Dick Van Dyke Show and Bewitched might have been adored in the 1960s by audiences but they were never held in the cultural regard of Neil Simon’s The Odd Couple or Billy Wilder’s The Apartment. The kitsch 1970s fun of The Brady Bunch became a household pleasure but did it have the same cultural appreciation as Robert Altman’s M.A.S.H. (which itself spawned a successful TV comedy series)? Only as we reach modern day comedy examples, from Malcolm in the Middle to Modern Family, do we begin to see the embers of that critical change.

WandaVision in that sense feels like a love letter to television that no longer exists, and never will exist again. Fact is, the majority of people engaging with the MCU probably did not grow up with many of the series Schaeffer’s show here uses to play out the meta-fictional narrative. It works in the context of Wanda as the impoverished Eastern European child who gathers her understanding and knowledge of Western pop culture through antiquated media (which itself is almost a cliche), but you need to be of a certain age to feel these touchstones in quite the manner Wanda does. This, to me, further accentuates the entire point of WandaVision: mourning what we can never get back.

This was the narrative point most people going into WandaVision considered the raison d’être for the story being told: Wanda coming to terms with Vision’s death, and ‘The Series Finale’ instead chooses to pull a Wrath of Khan; the vision of Vision gives White Vision a vision (keeping up with this?) of his past, a download of memories, which presents Marvel with a second chance. Much like how Leonard Nimoy’s Spock came back from the dead, or to use another Star Trek example, Star Trek: Nemesis offered the android B-4 as a possible way to keep Data around, White Vision has the opportunity to become the MCU’s Gandalf—reborn, stripped of the same memories and emotions, yet still around for Paul Bettany to play and to facilitate a possible rescue of Scarlet Witch from darkness and oblivion. 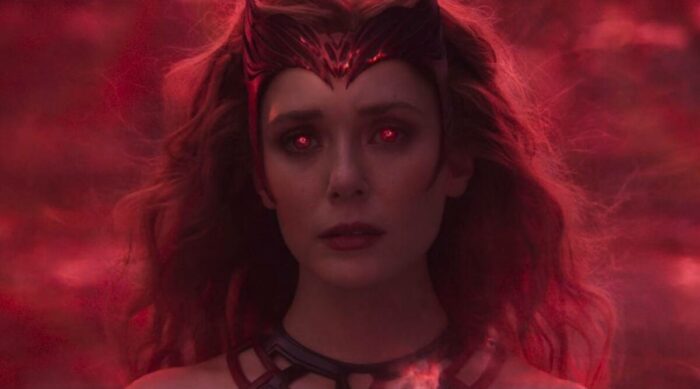 The point is that Marvel really are proving the key criticism in some quarters of their entire project, in that they simply cannot let go of their own success stories. The death of Tony Stark, and the presumed happy ending of Steve Rogers, seemed to put paid to this issue—Endgame provided them with logical conclusions to their ten year character arcs. Yet they are aberrations, as WandaVision proved. The show had the ample opportunity to provide Bettany and Vision with a coda Infinity War robbed he and Wanda of, along with a means of exploring what has become the fantasy of a traditional American homestead worn away by decades of depressed values, social mobility, community and culture. It only scratches at those opportunities rather than fully taking them.

In this context, Wanda’s emotional goodbye to ‘her’ Vision falls flat because it is explicitly encoded as temporary, and our meta knowledge of the MCU means we likely understand that Bettany and White Vision will no doubt reappear down the road. This will no doubt please fans of that character but it makes a mockery of the title of the episode. This is not a ‘Series Finale’, even if this is the final episode ever of WandaVision. Endgame was a ‘season finale’ if we consider the first three phases of the MCU as the cinematic equivalent of a television series, which I have argued it should be, but the MCU’s evolution and combination of movie and TV narrative suggests, implicitly, the larger meta story of Marvel never will end.

This works from a comic perspective because that medium, by its very nature, is a continuing series of sagas that are retconned, rebooted and altered in terms of continuity on a regular basis, but this is not historically how we have engaged with television or cinema. Stories continue, franchises evolve, but narratives begin and they end, eventually, even if thematically rather than structurally. All of the series WandaVision played off, and used as the launchpad to explore the fictional construct of a ‘perfect’ American family that Wanda knows she will never have, came to an end. They existed at a time and space within American culture where those stories and those characters made sense, and in many cases are rooted in those eras.

WandaVision, and the broader MCU, will be the same with distance. The history of how it worked to transform franchise, populist cinema is already one able to be written over the first decade of its existence, but WandaVision might be remembered as the point, especially post-COVID-19, where the MCU moved into a new space. A space where narrative is no longer tethered to one medium or another. A space where literal and meta-fictional worlds combine. A space where no series really, ever, gets a finale.