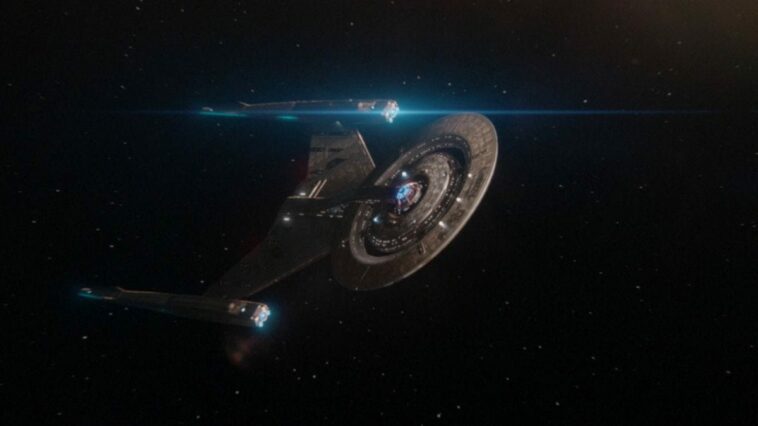 We are living on the cusp of a new ‘golden age’ of Star Trek, at least when it comes to the profligacy of content from the Viacom/Paramount owned franchise, but the promise by executives of Star Trek on the air all year round comes with both caveats positive and, unfortunately, negative.

April 5th is always a banner day for the Star Trek franchise, to a lesser degree than perhaps May 4th for Star Wars fans, but nonetheless ‘First Contact Day’ (symbolising the in-universe moment humans first made contact with the Vulcans in the year 2063) made sense from a marketing perspective as a date to announce the coming slate of Star Trek projects across the remainder of 2021 and into 2022. Star Trek: Picard promised the return of universe-bothering omnipotent trickster Q for its second season. Star Trek: Discovery teased a galaxy-bothering threat for its fourth. Star Trek: Lower Decks provided a trailer for its second season, a release date and the promise of a third season to come. And finally the new kid on the block, Star Trek: Prodigy, revealed quite how legendary Starfleet Captain Kathryn Janeway will feature in the animated series.

The announcements were smart from an economic sense and work a similar play book we are witnessing from the major franchises—Star Wars and Marvel—in providing details at once on numerous projects and allowing fans to break down, theorise and generally build anticipation for the content to come. For those dubious of fandom and franchise dominance, this can be wearying. For those like me fully invested in many of these admittedly ruthless corporate-run entities, it can be thrilling. Star Trek, for all it exists as a signature globally recognised brand of renown, does not sit in terms of scope and scale with those other examples. The films have never made the money Star Wars or Marvel do, and their TV series’ have always been considered by the mainstream as niche, decidedly geeky and certainly during the 1990s, decidedly ‘uncool’ to the masses. 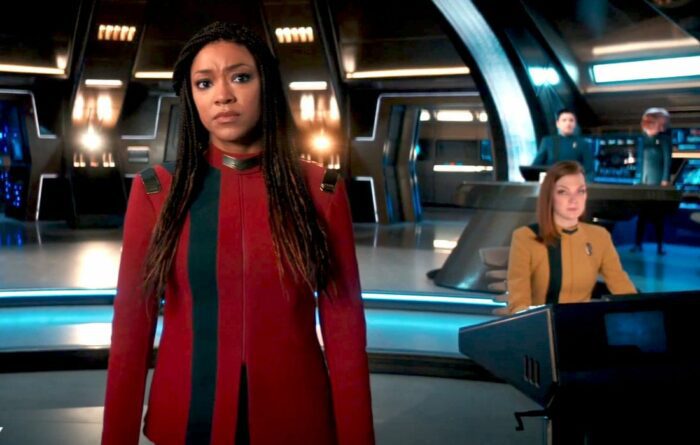 To the credit of the new shepherds of Star Trek since 2017, when Discovery arrived as the first TV series since Enterprise’s cancellation in 2005, they continued the already existing attempts to modernise the franchise and extend its popularity to mainstream audiences in the wake of the MCU’s arrival and Star Wars’ return. The 2010s became the decade in which the geek inherited the Earth and the J. J. Abrams’ produced trilogy sought a piece of that. The films were clearer, sexier, easier to parse and arguably more populist, no matter how many continuity points they respected and Easter Eggs for O. G. Trekkies they planted. Under the lead of Alex Kurtzman, since emerging as the new Rick Berman-esque sherpa of modern Trek, Discovery at first played a middle ground between new and old before sailing away into a whole new destination in the second season.

Discovery did not move forward, quite the opposite. The second season of that show hitched its wagon closer to The Original Series from the 1960s than any Star Trek show had done since the iconic first Gene Roddenberry series was cancelled in 1969. It worked in a younger Spock, showed us the original U.S.S. Enterprise, filled in continuity leading up the original pilot episode of TOS, ‘The Cage’, and even in one episode provided a ‘previously’ recap segment for a Star Trek episode made 53 years earlier. That remains, as far as I can tell, unprecedented in all of television. By giving in to complete nostalgia, Discovery started to completely abandon any pretence of delivering a new form of Star Trek for the masses, even despite operating to modern narrative devices such as heavy serialisation and ongoing character development.

On arrival at the beginning of 2020, Picard followed suit. In fairness, the return of Sir Patrick Stewart as the iconic figurehead of The Next Generation was always designed to appeal to the 1990s era Star Trek fan primarily rather than work to bring in new audiences, but Stewart, show runner Michael Chabon and everyone involved in the run up were consistently at pains to explain just how different Picard and his situation would be. Yet the first season gave us Data. It gave us Riker and Troi. It gave us Seven of Nine and the Borg. It presents a darker, less hopeful Star Trek in which Picard, lost and noble in his emeritus years, stands as a bastion of a better history, but to introduce any new fan to what Star Trek is and means with Picard would be counter-productive. The show is an extension of Star Trek more than encapsulating what Star Trek actually is, to me at least. 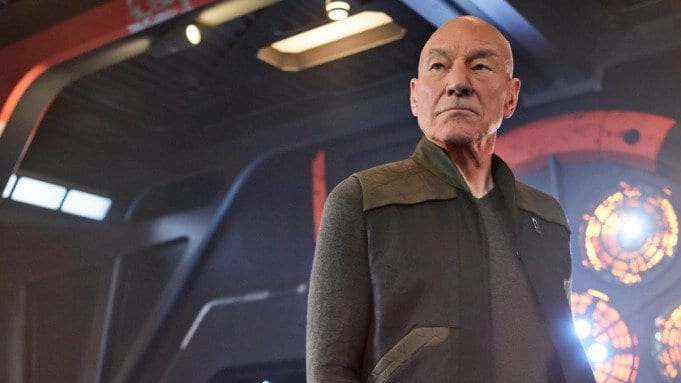 The debate over what constitutes Star Trek is as old as the series itself, and often is rinsed and repeated across fandoms, most of which share similar constructs and ideas. Star Trek, ultimately, is whatever you want it to be as a fan, and nobody should be suggesting otherwise. Yet the space Star Trek as a franchise now exists within appears to be a push-pull, an internal tug of war, between appeasing existing fans and exploring the safer, unipolar past of Star Trek’s success, and daring to edge forward into new territory. In many ways, Picard is new territory. Star Trek series’ of old always featured a ship (in one instance a space station) and a crew. It would never have dared to revolve a series around a character, away from Starfleet as a construction. This is new and, for this franchise, daring.

Indeed the very style of Star Trek show that once was the accepted norm, Lower Decks, is now expressly positioned as a lampoon of the 1990s; a kind-hearted, animated mockery of Star Trek tropes, storylines, writing and narrative that both plays like a ‘90s era Star Trek series and meta-textually shows awareness of how you simply could not make one of those shows in the modern day context. Discovery became the series it became, front loaded with action stylistics, ongoing plotlines, a heavy dose of mysticism rather than scientific rigour, and a significant emotional reliance on its protagonist, because that is precisely how many such ‘genre’ series are produced in an era of fast-paced content discussed briefly in the digital sphere before being replaced by something new, exciting and fresh.

Yet there does feel a place for the kind of Star Trek storytelling of old. Picard’s seventh episode ‘Nepenthe’ again pandered to nostalgia but in taking its foot off the narrative gas for a week, and telling a well-rounded character story about a family who Picard interacts with, many fans were reminded just what Star Trek was once unafraid to be: steady, meditative, thoughtful and curious. The older series’ of course had their share of action and suspense and stakes but they had the space, especially over 24–26 episode seasons rather than 10–13 as we get now, to pause and reflect. Picard benefited from this. Discovery, in a third season which rocketed the crew into supposedly new horizons far into the future, did similar with ‘Unification III’ and, lo and behold, a genuinely memorable hour of Star Trek emerged as a result. 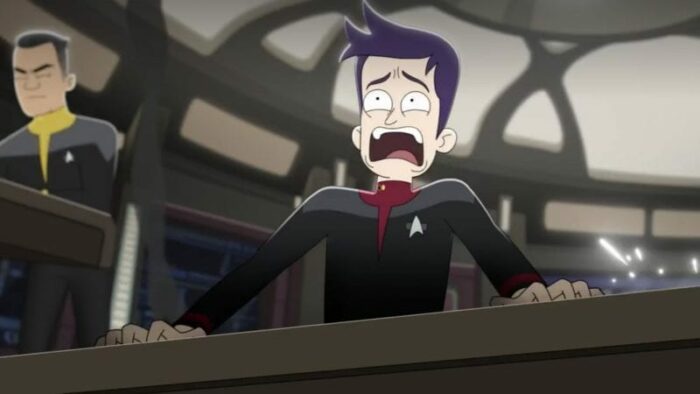 You sense Star Trek is caught between these two paradigms: old nostalgia and new frontiers, and is unsure quite about which way to go. Discovery’s third season gave the writing staff carte blanche, freed of any existing continuity, to do whatever they wanted. In the end, they played it safe—corny crime syndicates, fractured Federations, and fairly rote, updated visits to Earth or Trill etc…which did little to expand the mythos of Star Trek in the manner of the 1990s series which moved the universe into fresh, innovative territory. Discovery might not be moving backward any longer but it remains decidedly inward, obsessed with the emotional veracity of the cast and characters as opposed to boldly going, in an uncertain future, into new physical and existential territory.

The fourth season has the space to correct this, and while the trailer does once again suggest an arch threat only Discovery can save everyone from (a la the Burn in Season 3), the presence of an anomaly might provide the series with a truly alien, V’Ger from The Motion Picture concept that will restore the wonder in Star Trek that has been lacking in recent years. We won’t find that in Lower Decks, which while fun and surprisingly well written and characterised, will almost certainly continue to play on the Star Trek symbols and structures we adore. Prodigy remains an unknown entity but being designed for children, and featuring the reassuring presence of Kate Mulgrew as an instructive holographic Janeway, it will likely be more about reinforcing Star Trek’s core values—aligned with modern liberal values—than exploring the Delta Quadrant’s hidden recesses.

Picard—for how joyous it will be to see John de Lancie back on screen as one of Trek’s most iconic villains—will likely continue Picard’s introspective journey back toward his old self, and if Q’s promise in the trailer that “the trial never ends…” sees threads from TNG’s ‘Encounter at Farpoint’ and ‘All Good Things…’, in which Q placed humanity on trial believing they had no business being out in space, is returned to, Picard will no doubt continue the theme established in the first season through allegory of how the West has lost its way in a fog of nationalistic fervour and isolationism. Q will no doubt return to use Picard to make a point the series, and Star Trek, seems determined to instill – the bold, Federation future is by no means a guarantee.

As with most things, the future of Star Trek remains uncertain bar one factor: Paramount are investing heavily in the brand as a constant feature of modern streaming schedules, with a brace of content in production. This is wonderful for any Star Trek fan. The interesting question is what course these existing and new series—including upcoming Discovery/TOS spin-off Strange New Worlds and the in development Michelle Yeoh-fronted Section 31 series—will chart.

Will they seek the final frontier? Or keep running back toward the first?