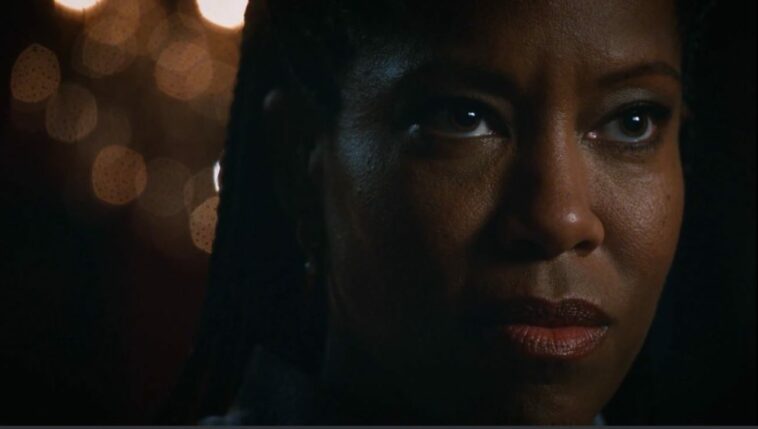 “I get the urge for going, but I never seem to go.” – Joni Mitchell

“Lens,” the sixth episode of the second season of The Leftovers, focuses on two women who grapple with guilt, denial, and the ever-present itch to get up and leave.

Nora, who we’ve gotten to know since the beginning of the show, is someone who’s so deeply heartbroken about losing her family to The Departure, she viciously fights against any possible hint of another strange supernatural event occurring. She’s terrified of feeling that pain ever again, and is willing to get downright cruel if it clears away the possibility of another Departure occurring. She’s a bit like John Murphy, who savagely beats those who promote a world with the possibility of magic or the supernatural, stamping out superstition while also living in a town nicknamed Miracle due to nobody Departing on October 14th.

Next up is Erika Murphy, John’s wife, who has her own skepticism towards the supernatural rumours and beliefs that swarm the town. Erika, a loving mother and seemingly devoted wife, shares John’s skepticism of the supernatural world. There are no miracles in Miracle. She didn’t seem to think much of the sacrificial goats or other superstitions, at least until she considered running away from it all. And when her daughter inexplicably vanishes, her faith is tested.

We only get glimpses of what seems like an unhappy past for Erika. There’s no mention of her mother, and her father did something so unspeakable to John that he’s been banished to a trailer on the edge of town with her children forbidden from seeking him out. What’s most compelling about Erika is that despite her deep love for her two children, and despite living in a beautiful house in a peaceful town that is deemed blessed by the rest of the world, Erika still wants to run away from it all. And judging by the bag full of cash hidden in her closet, Erika truly seems to want to escape deep into the night, away from her husband, children, beautiful house, and blessed town without an explanation.

It’s a common trope in television, the wife who seemingly has everything, but nothing is perfect. Many of us are desperate to break out of our crappy jobs, relationships, and other forms of confinement. But to want to leave your whole life behind, family and all? That takes guts. Meanwhile, look at Nora who wants nothing more than to be reunited with her family, while Erika can’t wait to get away. 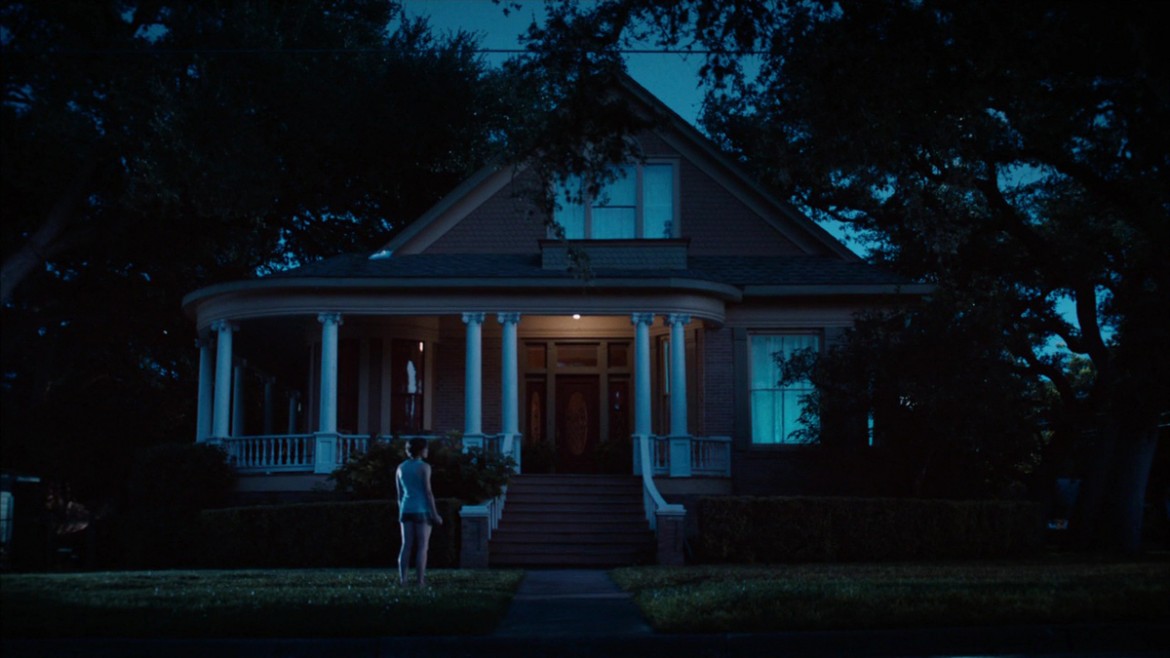 Nora, meanwhile, starts her morning in “Lens” by throwing a rock through the Murphy’s window, and it’s suggested this isn’t the first time. The reasoning seems easy enough, after John’s banishment of Nora’s brother Matt and his wife, Mary.

But when Matt questions Nora as to why she’s acting hostile, Nora gets defensive—“Why would I feel hostile towards them?” she asks. “I don’t know. Why would you?” Matt responds in his patronizing way.

The Murphys are more than just some unwelcoming neighbours. They’re almost like funhouse mirror versions of the Garveys. Nice-seeming family on the outside, but many layers, difficulties, and secrets on the inside. Like the Guilty Remnant who would stand outside Nora’s house as a reminder of her departed family, the Murphys are a reminder too, sitting literally next door, that problems can’t be solved with a new postal code. They might as well be a giant neon sign saying “Nowhere is safe from life, you dummy!”

Nora can change her address, but she can’t change her past, or the fucked up ways that the world continues to turn. Like Jill said: “Wherever you go, there you are.” So Nora throws a rock at them.

It’s not just the Murphys that are causing Nora a deep unease either. As the episode title suggests, Nora learns of the “Lens” theory regarding Departures, meaning that there’s a possibility that Nora’s family Departed purely due to her, the “lens” standing next to them. And now with a seemingly Departed Evie next door, Nora grapples with the terrifying possibility she could literally cause Departures by just standing there. How can you escape a problem that you involuntarily cause wherever you go? 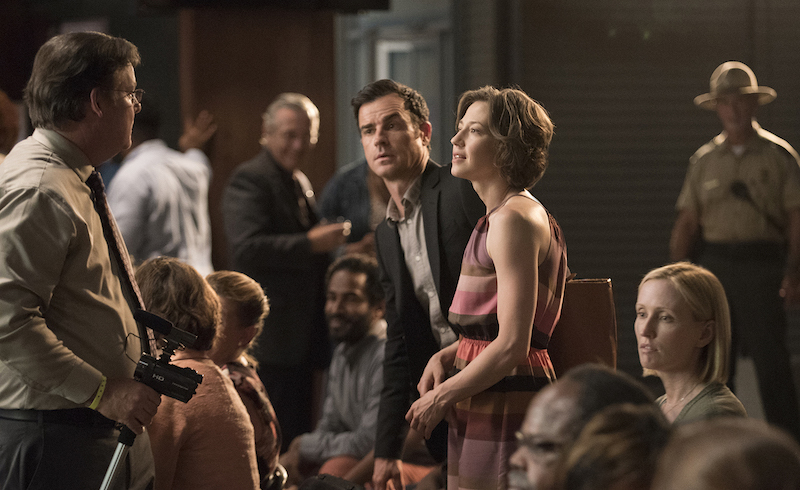 Nora coming to Erika with the new Departed questionnaire isn’t out of the goodness of her heart. She’s not looking to give Erika closure about Evie’s disappearance. She’s there after Erika insisted at the fundraiser that her daughter Departed. Not disappeared. Departed. And Nora is here to shut that sh*t down. Departures are not a thing that can happen anymore. Not in her world.

Right off the bat, Nora is dripping with condescension. She knows Erika turns a blind eye to John’s violence and intolerance, and stayed silent over Matt’s banishment. But she can’t hide it when Erika admits she can’t remember the last thing she said to Evie. Surely, if you cared about your daughter so much, you’d remember the last thing she said?

And then Erika tells the story of the bird box wish she made the morning before Evie vanishing. If a bird you catch survives for three days in a buried box, you get a wish. Erika wished for her daughter to be okay with abandonment, which is quite a mighty ask, and a selfish one at that. Think back on Laurie, who also abandoned her daughter, and what it did to Jill.

With the bird, Erika started flirting with superstitious habits before her daughter’s disappearance. And with Evie gone and no reasonable explanation left, Erika finds comfort in the fantasy that she may have caused Evie’s departure thanks to her wish. Imaging you magicked your child away with a monkey’s paw-type wish is easier than the possibility of her being kidnapped, murdered, or, perhaps, joining a nihilistic cult.

Nora’s face turns smug once Erika finishes her bird box story. She thinks she’s won, since Erika’s only source of logic is a folk story of a bird surviving being buried alive, which magically caused some teens to vanish. What an idiot! Nora says she too felt responsible for losing her family. “I moved past it, I evolved,” she says, with an air of superiority.

Erika can read Nora’s condescension easily, and her face bristles with rage. And how can she not? This woman marched into town, throws rocks through her window, and is calling her pathetic to her face for trying to rationalize a traumatic loss.

Erika could tell Nora to f*ck off, or even leap across the coffee table and give her a smack. But instead, she just asks the same question: what was the last thing you said to your kids? Nora pauses. The fact that Nora can’t instantly answer that question, just like Erika, proves a point. These women aren’t that different from each other. They both lost loved ones suddenly, out of nowhere, and fading memories are all they have. Now it’s Erika’s turn to be smug, and instead of rage, Nora tears up. She blinked. Nora loses. 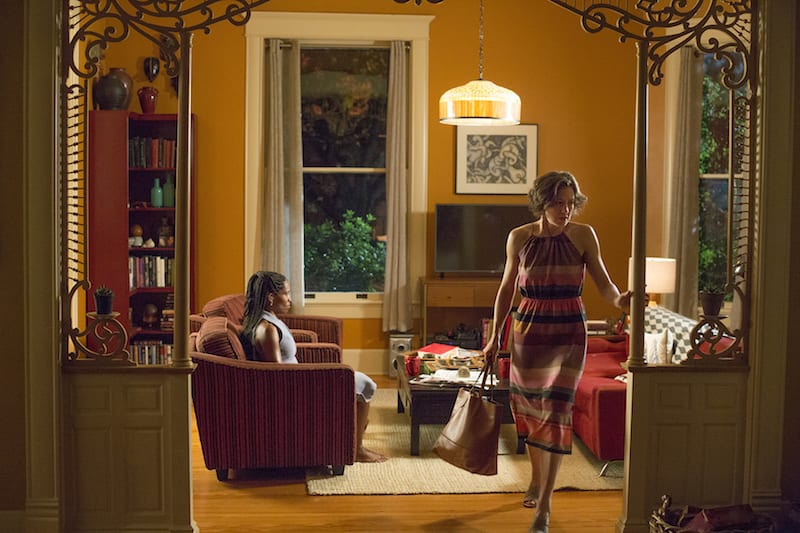 Nora storms out of the house, leaving Erika to sit with her thoughts. Maybe Nora is right, and it is pathetic that she’s fully convinced herself that a simple wish made three girls disappear. But she’s also finally allowing herself to live in the fantasy that most of the Miracle residents do with their performative protections; their simple actions have lasting, earth-shaking consequences. It’s a self-punishing headspace, believing that your urge to ditch your family resulted in possible harm to your daughter.

Nora returns home to Kevin, who’s dealing with his own problems. He opens up to Nora about his hallucinations, making her come crashing down to earth. Yeah Nora, maybe you shouldn’t have been chasing a grieving mother around town trying to prove a point. Your boyfriend is going crazy!

Crash! Then we get Nora’s rock coming right back at her through the window, courtesy of Erika. They’re in a tennis match, lobbing stones back and forth. Soon it could turn to boulders.

And maybe it’s Kevin’s admittance of insanity, or maybe it’s the rock that’s the final straw for Nora. But like Erika, she gets the urge to run too.