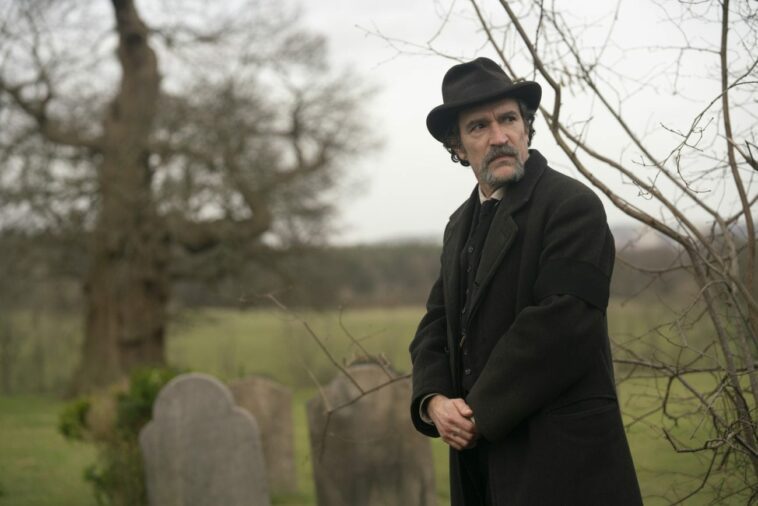 The following contains spoilers for The Nevers S1E4, “Undertaking”

The Nevers S1E4 (written by Madhuri Shekar and directed by David Semel)  opens with Mary’s funeral procession. Shots of her wooden casket being carried are interspersed with shots of wooden crates (which we will learn are full of explosives) being carried through the streets of London. The episode’s title, “Undertaking,” immediately refers to both the burial and the projects established over the course of the hour, signifying in its polyvalence a connection between death and futurity—the openness of a question. What happens next?

The orphans gather to put Mary in the ground, with Frank Mundi watching from the distance. Perhaps his perspective is that of the world, with a straightforward point of view—a young woman has died and he is there to mourn. He doesn’t get angry with the Purists who arrive to mock the proceedings because he sides with the Touched so much as because he, frankly, finds it rude. A woman has died. She happens to have been a woman he loved, but the fact that she could sing a magical song is practically irrelevant to Frank, much as later in S1E4 we see him demand justice for Maladie. She’s a murderer, but not a monster or a demon in his eyes.

The hymn the orphans sing at Mary’s funeral is “Now the Laborer’s Task Is O’er,” and dates to 1875. Of course it isn’t clear that Mary was much of a laborer when it comes down to it, but some of the lyrics are nonetheless striking:

Now the laborer’s task is o’er;
Now the battle day is past;
Now upon the farther shore
Lands the voyager at last.

Father, in thy gracious keeping,
Leave we now thy servant sleeping. A-men.

There the tears of earth are dried,
There its hidden things are clear,
There the work of life is tried
By a juster judge than here.

The question of labor is indeed somewhat central to “Undertaking,” as Lord Massen squashes an attempt at collective action on the part of his workers, but is also cast as the employer behind the scenes of Mary’s murderer, Amalia’s assailant, and ultimately also the traitorous Lucy Best. Massen is quintessentially a boss, and I don’t at all mean that in a good way. He represents a class with power over others that has no uncertainty with regard to the legitimacy of its power. When Massen tells his workers he is being “very generous” by not docking their pay, he believes it. And when he declaims to Mrs. True that the power of the Touched mocks God, he believes that too, even if at the moment he is speaking as if for someone else.

Lord Massen is the voice of the established order to the extent that in that scene he is perhaps most himself. He insists that he is not Mary’s murderer but at the same time suggests that England is. It’s as though he views himself as an organ of the state and thus absolved of any personal responsibility in the matter, much like the executioner, in a hood to preserve his anonymity, only carries out the sentence of justice rather than being liable for the death of the condemned.

Mary was not a threat in herself, but a beacon of hope to all of those who would threaten the traditional hierarchy of society simply by existing. This is why she needed to be snuffed out.

Lavinia is the flip-side of this coin—the seemingly benevolent exploiter of the Touched who nonetheless wants to harness their power for her own purposes. Of course she is strangely absent and mostly in the background of S1E4, but what her ultimate goals are remains a question worth pondering. I continue to think that in some way these might actually be “progressive,” but I suppose we will have to wait to find out, much as we’re still waiting for some update about Dr. Hague’s experiments.

The overall structure of The Nevers remains a bit nebulous and after “Ignition” last week it’s not entirely clear to me whether we ought to trust that its various threads will come together any more than the orphans should trust their benefactor. The thematic positions of Massen and Lavinia have been largely clarified, but Hugo Swann remains something of an enigma, unless we merely view him as an exploiter of the Touched in a more straightforward—and more sexual—way. But whereas “Ignition” seemed to be taking that option, “Undertaking” makes him ambiguous again. And of course I like him more as an ambiguous figure, finding it bizarrely charming that he likes to play chess with blocks of cheese, but I find myself wondering again how much it is his charisma (which was strangely lacking in S1E3) that leads me to find him alluring.

The overall point, or even question, of The Nevers, in other words, remains opaque four episodes in, as does the position of Amalia True. We discover in S1E4 that Mary’s song was directed at her, and learn that she doesn’t know what her mission is any more than we do—just that she has one. There are hints of a connection between Mrs. True and the ship that came to London in 1896, leading me to wonder if she is some kind of alien herself. That’s not her true face, after all, or at least most likely isn’t. Perhaps the real widow True did drown on that day three years ago and her body is now possessed by some outside spirit?

I cannot even begin to know what to make of that in terms of the allegory The Nevers is presenting.

But perhaps this is my mistake: it seems so clear that this story must be an allegory that I keep trying to fit it into that kind of box, wondering how to correlate the forces at play in this fictional world to forces in the real one. I think that’s worth doing, as an exercise in thinking, but it’s not clear that an interpretation along these lines is going to emerge when push comes to shove. Rather, we should perhaps take the obvious and overarching question as the one that will be most thoroughly under examination—if the Touched were real, how would we react?

The title of The Nevers is not diegetic to The Nevers, but it seems clear that the term refers to the Touched. They are what could never happen and what could never be—what is beyond a frank view of the world. The meaning of the title of the show in this way lies in the impossibility of its content: a world where supernatural powers quite literally threaten the powers that be.

In the real world it is always something as mundane as workers trying to unite for common cause, a rebellion easily enough put down by a firm hand or a firmer boot. Massen is threatened by the Touched because he can’t control them. The status quo cannot accommodate them, thus they must be wiped out.

They are an affront to God insofar as those like Massen would give a divine ordination to the hierarchy of social relations from which they benefit. The Touched are demons, or monsters, in his eyes. They demonstrate the chaos burbling beneath the surface of that tenuous order of things he wants so dearly to bolster against attack.

The Touched aren’t a symbol of some real-world possibility, they are symbols of the impossible—the nevers.

Those who stand against them have fashioned themselves Purists, which casts the stakes of the conflict in stark relief. The abnormal is viewed as the impure, a taint not just on the one touched by it but on the body politic as a whole, like a lesion to be lanced. And on the other side we find Maladie, who has taken a name that embodies that notion of sickness and proclaims that she only kills angels.

Recall from the pilot that it would seem her victims have primarily been psychoanalysts, who might be seen as aiming to straighten out deviants, upholding a model of normalcy as a standard by which to judge those who don’t fit the mold. Whether or not this is fair to those who practice analysis, or psychologists more generally, is somewhat irrelevant to the underlying question of whether it is legitimate to expect us all to conform to prevailing social norms, or whether those norms perhaps need to be blown up like the explosives in Massen’s warehouse.

Maladie is a murderer, of course, and I’m as against killing people as our friend Penance, but as the Purists paint all of the Touched as a malady, we should be led to ponder the differences between them. Some are murderous while others are kind; some celebrate their powers while others lament them.

Lucy views her turn as a curse—and for good reason given that she accidentally killed her baby with it—but that has led her to betray Mrs. True and the orphans on the thin promise of some sort of cure. Massen doesn’t have a cure, but perhaps he does want one, if he’s been keeping his Touched daughter in a dungeon for three years. If it comes down to it, though, one has to imagine he’d kill her. The important thing is to get rid of the pestilence infecting his beloved England, no matter the cost.

Penance and Augie reconcile after she clumsily interrogates him about Mary’s murder. Augustus Bidlow strikes me as interestingly in the middle of things, as Lavinia’s brother and well-to-do, secretly Touched, and less than willingly involved in Hugo Swann’s plans, whatever exactly those may be. Of course he is also a neurotic mess, but insofar as his name alludes to a real world monarch and his ability to inhabit crows alludes to a fictional one, and both of those were characters on other shows on HBO…well, you tell me if I’m reaching.

I do not expect The Nevers to tell a story that culminates in the crowning of a king, to be clear, but I do find myself increasingly pondering our characters’ names. Is it perhaps Amalia’s labor that is truly o’er—or perhaps we should be asking what the true work is she is undertaking? It is Primrose who opens the path to translating Myrtle’s understanding of Mary’s song—does this perhaps mean it is a wide and easy road to Hell? Or am I reading too much into things? Should we be paying mind to the notion of Ms. Adair as a “happy spear” or be thinking about her representing penance? And if so, a penance for what? Is Hugo Swann a reference to Proust, or a bird brain?

I am not sure which of those suggestions might be a source of meaningful insight and which are fanciful nonsense, which is a bit how I feel about The Nevers as a whole four episodes in.