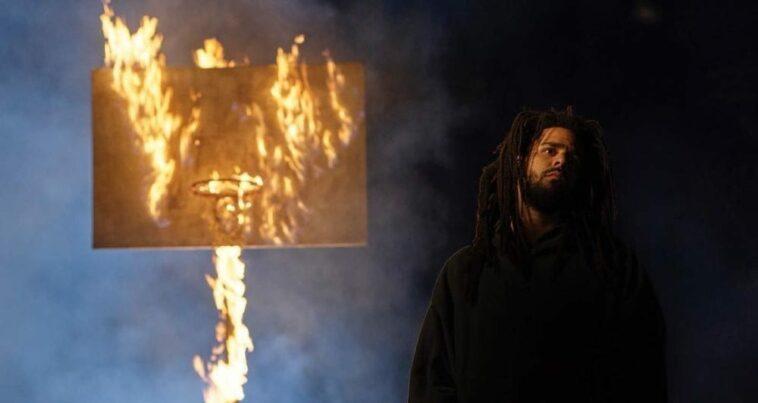 It’s perhaps strange that North Carolina rapper Jermaine Lamarr Cole should be one of the most polarising rappers of recent years. On paper he has a lot going for him; as one of the most old-school rappers of his generation, few artists on his level have respected the hip-hop blueprint as much as Cole. He’s also increasingly shown a willingness to explore conscious themes and conceptualise his albums, speaking for a more even tempered and middle brow wing of the rap school, addressing themes of drug abuse, violence financial responsibility, family and maturation. He’s also walked a lot of what he talked, setting up his own label Dreamville to cultivate the talent of the next generation, signing rappers like JID and Earthgang who have often surpassed him creatively.

The success he has achieved while staying respectful of the orthodoxies of hip-hop has gained him one of the most passionate fan armies you’ll encounter. However, he’s also met significant pushback from those audiences who find his middle of the road approach uninspired and insubstantial and his often drab delivery rather taxing. He’s done more than he might have to earn a degree of audience ire. Despite his stable of young talent, he’s embraced the ‘Cole went platinum with no features’ meme and shirked guest artists on many previous records, saying no one else was on his level. Some of his lyrical gems have raised an eyebrow many a time as well, eroding his credibility as a conscious rapper. Most recently, he took offense on record to calls for rappers to speak out against police violence, which struck many as a self-centred, defensive and tone-deaf statement to be releasing in the middle of widespread protests.

Since starting to listen to his music, I’ve always been quick to give Cole his due, there are usually a handful of tracks per album that I come away impressed with. However, he generally comes up short somewhere, with his more conceptual tracks sounding rather undercooked and not really having especially bold or insightful comments, sounding neither all that vulnerable nor particularly authoritative when giving his take on things. His recent releases have been especially hit or miss, with the aforementioned “Snow On Tha Bluff” track being a notable low point and his recent Lewis Street singles proving somewhat underwhelming, dispelling the good will established by his stellar 2018-2019 feature run. Collaborating with JID, 21 Savage, Rapsody and Young Thug proved Cole was capable of mixing with his contemporaries across various sub-genres and often more than holding his own on a track.

The announcement of his long awaited sixth studio album was met with some relief–2021 having been fairly dry as far as big-name releases–with Cole fans having waited more than three years since the last solo full-length project. Having dropped hints about the project, entitled The Off Season, for years, once formally announced, there was only two weeks to go before the release. Cole teased fans with a quick one-two punch of a teaser track “i n t e r l u d e” and the L.A. Leakers Freestyle both showing Cole at peak form, displaying the same vocal dexterity and lyrical passion that defined his best 2018-2019 verses. It inspired great confidence for the album to come, but Cole had sounded this good before, just never for a full album.

Thankfully though, the portents of those teasers were far from empty and The Off Season transpired to be Cole’s best album to date, a feat accomplished more than anything by the decision to keep things simple and punchy. Though his reputation has been made as a conscious voice in hip-hip, Cole has frequently excelled as an aggressive gun bar rapper and punchline lyricist. His more mature and introspective side isn’t completely hidden on The Off Season, particularly on the second half, but for the most part, he’s airing his fundamentals, bringing that freestyle energy and projecting confidence and swagger on each verse. Historically, his disses have been shrugged off as helpful advice or straight talking, but here there’s no time for such mealy-mouthed niceties, kicking the album off by gracefully arcing quotable punches, delivered lackadaisically over the classy, krunk-influenced beat of “9 5 . s o u t h”.

Cole’s ability to float on a beat has never been better demonstrated, with his often-monotonous intonations dismissed in favour of an unbothered melodic presence and more charisma than he’s ever had before on record. He projects the same mixture of hunger and self-assurance that so became his contemporary Drake on the If You’re Reading This It’s Too Late project. Here Cole manages to do what Drake did there: make his best album by keeping it simple, hard-edged and projecting the kind of unshakable confidence that only works when you seem to come by it effortlessly. His talking points are familiar: his adolescence in a violent neighbourhood; his domination of the rap game; his financial successes and personal concerns–but his creative wordplay and impassioned delivery convinces in a way it never has before.

Another place Cole seems to be shedding his pretentions is in the features, in that there are some. Besides the tasteful soul samples in the beat, Cole judiciously uses guest singers Bas, Morray and 6lack to supply melodic touches without breaking the mood of the tracks and Lil Baby continues his impressive feature run. Once dismissed as a Young Thug clone, Lil Baby’s gone from strength to strength in recent months and is slowly becoming a force to be reckoned with. Put him on your song at your peril, more often than not, he’ll run away with it. Thankfully though Cole holds his own against Baby on the track “p r i d e . i s . t h e . d e v i l” and reunites with 21 Savage on “m y . l i f e”. 21 and Cole make little sense on paper but their chemistry is undeniable. The two brought the best out of one another on “a lot” and they do the same here.

There may be a few slightly lacklustre moments here and there, “1 0 0 . m i l” being an example, and keeping things so simple does mean that The Off Season isn’t the most ambitious or memorable of albums. However there’s no question that Cole is sounding better than ever and is finally starting to live up to his potential, projecting the maturity, credibility and magnetism that has historically eluded him.