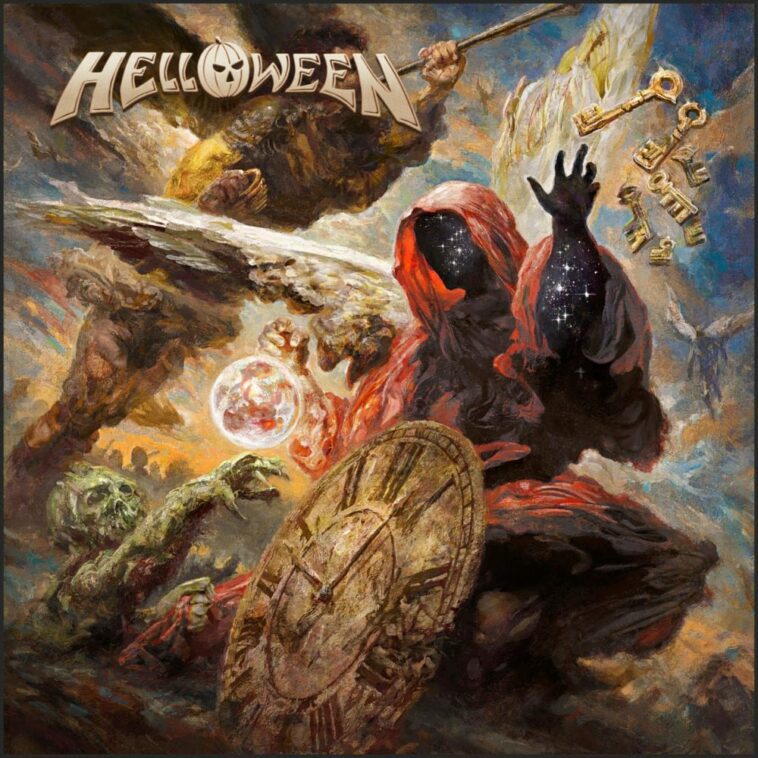 If only one thing could be said about Helloween’s sixteenth studio album, it’s that this is the most Helloween record of their career. That’s why it could only be self-titled, Helloween. Such observations are sure to whet the appetite of fans and catch the curiosity of others. What it means, though, is melodic power metal hitting operatic heights while remaining a beerhall energizing album.

It’s not just about style, either. The band’s current incarnation is an amalgamation of several past talents coming together. Several years ago the Pumpkins United World Tour brought former members Michael Kiske and Kai Hansen back into the fold. As such, contributors from every Helloween lineup going back to their first record, 1985’s Walls of Jericho, are putting something in the mix. Across vocals and guitars, Kiske and Hansen add those elements only they can bring to the album.

This record contains a lot of the past. That can be a hindrance for musicians of a lesser quality. However, Helloween manage to capture the magic of previous albums while spicing up the old with fresh flavors. Though a return to form, it’s not a rehash of old records. Perhaps there’s a freedom in this being the sixteenth album: the band has nothing left to prove. However, they’ve put together several tracks thundering for attention; Helloween is still putting the pedal to the floor.

The opening track “Out for Glory” begins the journey, and make no mistake, this record is an adventure. A showcase of all of the band’s talents, from wicked quick guitar licks to pulse pounding drums, it’s lyrically a testament to where the band is at. A hero has conquered all and wishes to rest on past laurels but there are still epic days ahead. Plus, the “dedicated old guard eagerly await your presence at the Colosseum.” There’s no choice but to remain “Out for Glory.”

The album immediately slides into “Fear of the Fallen” which the band released as a single in May. What starts softly soon shreds. Switching gears from steel opera to speed metal revival, the band pulls listeners farther along the sonic journey. If heads weren’t banging before, they are now.

“Best Time” and “Mass Pollution” follow up bringing power metal perfection. Both are rousing tracks sure to be crowd pleasers at any concert. They’re the sonic cure-all to sluggish blood.

The tone changes a touch on the song “Angels” without ever sacrificing intensity. The musical offspring of guitarist Sascha Gerstner, the song showcases the way members past and present combine their talents to conjure gold. In a way, it’s one of the few tracks that could only exist on the current album.

“Rise Without Chains” is a resounding anthemic metal summons. It feels familiar in the sense it could’ve been composed at any point in the band’s history. “Indestructible” follows suit before giving way to the rumble and rock chug of “Robot King.” The record then dives into “Cyanide” leaving one to wonder if the album will ever slow down.

The blistering pace lulls for the blink of an eye before unleashing the manic sizzle of “Down in the Dumps.” Although the lyrical content is more despondent than the usually uplifting material here, it never feels like a downer track. Sad without wallowing, this is a track electrified to life by furious guitars and soaring vocals.

The instrumental track “Orbit” is easy to miss as it seems like a long intro for the final song “Skyfall.” However, it so perfectly heralds the arrival of the epically operatic closer there’s no reason for them to be separate tracks. Still, the point is that Helloween closes extravagantly with a 12-minute song that must be heard to be fully appreciated. If for no other reason than it’s a phenomenal example of every vocalist — Kiske, Hansen, and Andi Deris — taking turns. Although each has their own magnificent moments throughout the album, the way they all come together on “Skyfall” makes it not just an astounding display of vocal complexity but an excellent example of what makes this record special.

Like the whole album, the closing track brings together the best of Helloween across time. A notion enhanced by cover art from artist Eliran Kantor, featuring visual elements from throughout the band’s history. The whole record is full throttle heavy metal. It grabs the attention and never once loosens its grip. Lead guitarist Michael Weikath is at the height of metal music mastery. Vocals take acrobatic leaps across octaves carrying the listener into the stratosphere. Drums and bass hammer a heartbeat keeping things more than alive, they seal the coffin nails on any doubt: Helloween is at their peak.

Fans of the band are guaranteed to enjoy themselves immensely. However, although the casual listener may not be initially interested in 12-minute tracks, there are plenty of songs for the metalhead in a hurry. “Best Time” and “Mass Pollution” can satisfy any speed metal fiend, while “Fear of the Fallen” is ideal for the nostalgic headbanger. It’s entirely likely, though, sampling any one track will eventually make a listener hunger for more. Thankfully, there’s a feast on Helloween.