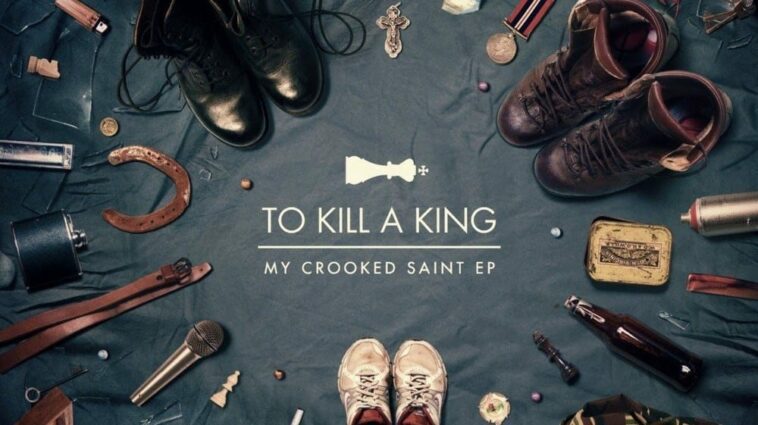 Album art from To Kill A King's My Crooked Saint EP

To Kill A King are a London-based band who released their first EP, My Crooked Saint, in 2011. Lead singer Ralph Pelleymounter also has a solo album, Dead Debutante’s Ball, which was released in 2019.

I have been a fan of To Kill A King since my early teens, and my formative years were punctuated by the group’s subsequent albums. I have specific memories attached to the release of each album and their music was the soundtrack to my teenage years.

As someone who has been following the group since near their beginning, I have loved watching the group evolve over time. I feel that each album has been better than the last, and I’m sure they have more to give. Here is a perfect playlist of their top ten tracks!

I thought we should start with a bang: quick tempo, existential dread, catchy melody, and pretty harmonies. I love this song and have ever since the first time I heard it. The title track of To Kill A King’s 2018 album, this was released during the first year of my degree. I remember listening to it all the way through the minute I got my hands on it, and it became the soundtrack to my new life.

Of all the songs on the album, this one seems the most emotional. It manages to touch upon so many emotionally provocative issues, whilst also providing a catchy and easy chorus.

The song contains a lot of negativity, “tired of keeping your family alive”, “God is dead, we’re worshiping science instead”, but also reminds us that none of us are alone in the world, crazy as it might be.

“The Unspeakable Crimes of Peter Popoff” (The Spiritual Dark Age, 2018)

A second upbeat song, this one is also from The Spiritual Dark Age. I love this track for so many reasons, not least the way the lyrics are sung being so catchy that I picked them up almost immediately and have been humming them relentlessly for the three years since. In some ways, this track actually reminds me of the Red Hot Chili Peppers, so it would be interesting to know if there was any influence there.

This song is based on the life of Peter Popoff, a man who claimed to be a faith healer but in actual fact was in collaboration with his wife to scam his followers. It uses multiple references to Popoff’s shows, and the song starts with spoken sentences mimicking what his adverts may have sounded like, (“call the number on your screen right now and let the power of God erase all of your debt!”). Then right into the punchy intro. The song is great for a dance but it doesn’t lose it’s message.

A slight change of pace from the previous two songs, this third choice is mellower. We keep the catchy vocal melody and careful song-writing, but we lose some of the angst.

When I first heard this song I knew it was going to become and remain one of my firm favourites. The rhythm of this song always has me swaying… I dare you to listen to it without doing a little dance.

From the very first album, this song seems to be about a doomed relationship and an unwanted child. Despite the very dark potential of those themes, the song is fairly calm… until the final 90 seconds where all hell breaks loose and we have a beautiful instrumental crescendo. In this way, it almost feels like two different songs. The diversity between the way it begins and the way it ends gives it an edge over other, plainly structured tracks.

Despite its dark themes, this song represents strength. It is written from the perspective of somebody looking to fight back against the life they feel has been laid out before them without their consent. It reflects upon the lack of control we sometimes have over our life and ourselves. This makes its message subjective, but also creates space for discussions about who we are and who we want to be.

The first of my two joint favourite songs from To Kill A King, ‘The Good Old Days’ starts slowly and speaks of inevitable change and how we “never stop to appreciate” things until it’s too late. My favourite lyric from the track is, “tell me now how it’s possible that a single day seem so beautiful and you never know them ‘til they’re gone”. The song encompasses the key themes of human nature—from an inability to live in the moment, the complexity of our emotions, and our yearning for nostalgia and the past.

This song became much more painful to listen to after the first coronavirus lockdown, but I also found new meaning in it that elevated the power this song holds for me. This song taught me to feel my feelings, and then let them go. The final chorus is so good that I could listen to it on repeat forever. The song builds so perfectly into it and it gives everything it promises.

This is my second joint-favourite song from this group. It has gotten me through breakups, makeups, a bachelor’s degree and the pandemic with a power that never ceases. For me, the main takeaway from this song is that, like ‘The Good Old Days’, you cannot afford to dwell on the past if you want to be happy. If you’re ever worried that you won’t get over someone or something, this is the song to turn to.

The standout lyric which summarises the track well is, “I ain’t going to write no more love songs, ‘cause they will stay after you’re long gone. It’s a dangerous game to play”. I suppose what Pelleymounter means to say is that even if you create something beautiful from the pain you experience after a breakup, that piece of art will always hold painful memories. It’s another important lesson. With ever relatable lyrics on an almost universal topic, ‘No More Love Songs’ is a banger and always will be.

This track took a little while to grow on me. Although the album is called The Spiritual Dark Age, and other tracks reference religion strongly, I found the direct focus on religion here disconcerting at first. Perhaps because such a sensitive topic was handled with such brutal honesty, or perhaps because the mere mention of religion sometimes makes me feel like I’m in for a discussion I don’t have the mental space for, there was something about the first few lines that made me feel like this track was going to be heavy.

However, while it does tackle issues with religion head-on, it does so in a way that feels more sorrowful than accusatory. Creating a dialogue suggesting that religion has become less about faith and more about being blinded to the faults that exist within your religious community, the song highlights the dangers of religious extremism. One line in particular, “burn temples to the ground to see the other not win”, reminds us how important unity is, and how blinded we can be until we take a step back.

My favourite lyric, “my God and your God they’re one and the same, hurting themselves to see if the other feels the pain”, reminds us that to damage any religion has a domino effect, and damages all religions. Although we are told “things will never change”, this song feels more like a desperate cry for unity than an attack on religious groups.

Pelleymounter sounds more disappointed than angry about the way modern society behaves around religion, and the message of this track is powerful and poignant. The final line of the song, “my god and your god were once in love, they’re so disfigured just look what they’ve become”, is a harsh reminder of the damage religious extremism can do.

This song describes quite literally the feeling of holding your head underwater until you hallucinate, and having to gasp. While it is very clear lyrically as a literal representation of drowning, it is also using drowning as a metaphor for feeling overwhelmed. Sometimes you need to take a deep breath and start again.

Musically, the track leaves the opening vocals scarce, and throughout there is an emphasis more on the vocal refrains than on the instruments. I think this gives it a feeling of fitting vulnerability and makes the song intense and memorable. I find myself coming back to it in times of anxiety and stress.

I love this track. A happy little song, a little bit like ‘Good Times’, it’s easy to get into. I also find it comforting, the words sounding like somebody reminding you to be calm and telling you that you’re okay.

The unique features of Pelleymounter’s voice really shine here, and the song, to me, is one of their best.

More relevant than ever before, a gentle start turns into a powerful song about unity and inner-strength. It feels positive and triumphant, with trumpets, and a reminder to “be passionate […] in these twisted times”. Like so many of their songs, the rhythm here is so catchy and light. It is so easy to get stuck in your head.

The music video is also very positive, featuring past members of the band as well as their friends, all contributing lip-syncs or dance moves, and smiling. The energy I get from this song made it a must for this list. It felt like the right place to end.