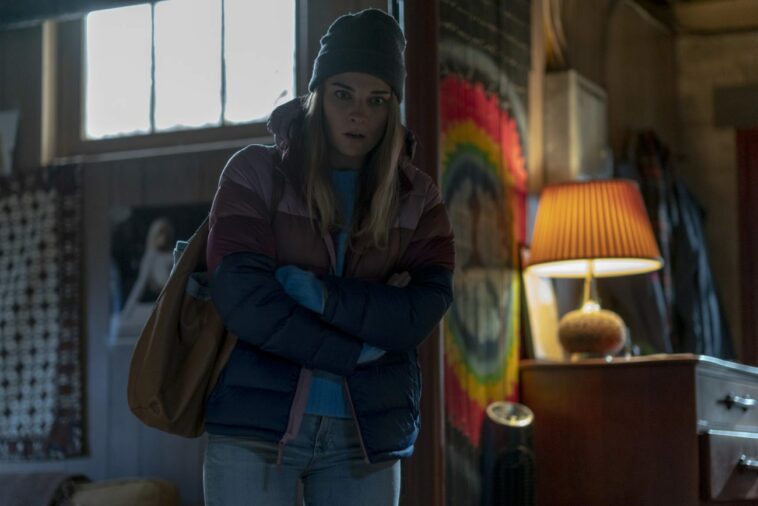 The following contains spoilers for the Season 1 finale of Kevin Can F**k Himself: Episode 8, “Fixed”

Kevin (Eric Peterson) is something of a Super Mario boss in the finale of Kevin Can F**k Himself—vulnerable and weak after an attack, only to regain health and return stronger. Sadly there are no hospital comedy antics, or even so much of a scrape on Kevin, but there is a brief moment of sadness and yearning for purpose where he turns inward and isolates himself only to be embraced by his community when he goes to the bar alone.

Contrast this with Allison (Annie Murphy), who has yearned for a purpose and higher calling beyond her marriage only to be squashed and leveled out, perhaps even worse off than before, because she can no longer hope for more.

Yes, the season finale of Kevin Can F**k Himself is a bitter reality check which returns to recurring themes of agency, autonomy, and privilege, but it also intersects these things with messy personal feelings of jealousy and pride—and in that balance turns in a conclusion that is shocking and dramatic, but also grounded and human.

“So Glad to Have That Low Life Off the Streets”

In the beginning we learn that the hospital has “pulled the plug” on (failed) killer-for-hire Nick (Robin Lord Taylor), who bucked Allison’s plan and in doing so got shot by a Red-Bull-fueled Kevin. Although not at all how they wanted their plan to go, this presents the perfect back-up plan for Allison and Patty (Mary Hollis Inboden) to go in and plant evidence that would make Nick look like the town drug mule. The only problem is his aunt lives upstairs, and starts to come downstairs when they’re planting the evidence—leaving Patty to flee and Allison to hide.

Patty rings the front door bell to distract Nick’s aunt and give Allison time to plant everything, only to have her then break a bottle upon hearing the news that Nick is still alive in spite of them pulling the plug.

This is Allison back as her fearful, doubting self. Gone is the brash confidence, the anger, the physicality. Like Kevin after the incident, she too is reserved and has regressed back to a less confident version of herself, dropping bottles, making mistakes, and censoring her language (again), even around Patty.

“‘It’s Kevin’ is Why He Gets Away with Everything…”

This is quite different to the experience Kevin has, in that he is able to rise again after the incident. Granted his context of the incident has a totally different lens given that he doesn’t know the inner-workings (read: truth), but his ignorance to the situation proves to produce something deeper in him: a passion for fixing the “broken” community.

In typical Kevin fashion, though, these problems in the community are things like: immigrants “stealing” his packages, Allison “losing” his ten percent discount at the liquor store, and Sean Avery not getting assaulted when he comes to eat at a Worcester restaurant. But he’s celebrated by fellow bar patrons for his honesty in “telling it like it is.” (A phrase that will always bring up memories of being in a Windsor, Ontario Tim Hortons, and hearing a man talk about how Don Cherry shouldn’t have been fired for “telling it like it is,” which in Cherry’s case was also immigrant-specific racism.)

Politics is an interesting and yet not-at-all-shocking choice for Kevin to run towards, and further drives home another meaning of the episode’s title “Fixed.” So often the card is stacked in favour of unintelligent men like Kevin who have charismatic presences and unthreatening physical appearances that they let them get away with literally shooting someone (potentially) dead in their own home.

It will be interesting to see how Kevin’s newfound community support (and basically a further shield against any wrongdoing) will benefit him in the next season if Allison continues to plot his demise. The JFK/Jackie O. comparison Pete (Brian Howe) makes of Kevin and Allison is a chilling comedic comparison, and maybe gives us a bit of a look into where they want to go next season.

“Being With Me is Giving Up?”

Also happening in this jam-packed episode is Sam (Raymond Lee) showing up on Allison’s front door step to express his displeasure in how they left things. I never finished Bridgerton, but I imagine this being that viral “I burn for you” moment from Sam, but in Allison’s world that looks something more like acknowledging her prized coffee table (which he does).

There’s a saviour complex present in Sam that has always kind of existed, and has enabled something in Allison to think that they could start anew and run away together, or at least start an affair together. Allison confronts the running away idea with Sam with more of a critical eye in the parking lot behind Kevin’s political campaign kick-off party.

With Sam having left Jenn, Allison and Sam could very much run away together, and they could change their names and Allison could do things like “make her own bowls and remember to water her plants.”

But she jumps out of the fantasy of this when she realizes Sam thinks he’s saving her, and that he thinks he’s what’s better for Allison, and that she doesn’t know how to help herself. She realizes Sam sees her as a charity case and as something to be saved, and in perhaps her most gleaming moment of self-compassion walks away from Sam.

For the record, I do think Allison has trouble accepting love and vulnerability from people, and I do think it’s a bit naïve to completely write Sam off as a bad character, but I do also think this is a brilliant realization for Allison that takes her out of the fantasy life she has maybe built for herself with Sam, or at least the escapism she created for herself in starting an affair with him.

Also experiencing trouble in paradise are Patty and Detective Tammy (Candice Coke) once it starts to come out that Tammy doesn’t actually like Allison, which Allison of course senses. The reason for this is not because she suspects Allison of anything, though, like she thinks. Tammy just thinks Patty and Allison talk too much, and ultimately is jealous of their closeness.

Unfortunately to find this out, though, Allison manipulates Patty to go through Tammy’s notebook. This, in turn, starts a fight between Patty and Allison as Patty lets her know that she would basically do anything for her, and that Allison manipulated her. In this series of (justified) accusations, she also says that Tammy is the only person that she has. Patty says this, of course, to wound Allison’s pride. She also does this to perhaps subconsciously get Allison to confess that she cares about her in a time where she feels like she has no one.

Allison stops short of admitting how much Patty means to her, but does manage to admit that Patty was the one who “woke her from the dead.” For Allison, love is hard because it means pain and expectations from other people that may not be true to who she really is. With Kevin, it has meant years of suffering and playing into a certain role and fantasy, and even with Sam there were aspects of that. (Not to mention Sam had problems with Allison being in control sometimes.)

Ultimately this lack of declaration leaves Allison seemingly alone at the end. Her pride (and trust issues) prevent her from reciprocating Patty’s care, and Patty leaves. Ultimately, pride and selfishness really end up getting in the way of a lot of things in this episode: from Nick going rogue with his murder plan, to Kurt (Sean Clements) and Tammy having something of a big dick standoff only to then have Tammy question the narrative Patty presented to her after the shooting.

“…And He Would Never Seek Me Ever Again”

In the last two minutes of the finale, we are treated to a twist that honestly gave me chills. Neil (Alex Bonifer) had been hiding in the kitchen closet all along and had been listening to the fight between Allison and Patty in which they confirmed with each other that they had attempted to kill Kevin.

Neil and Allison start to bicker and Allison speaks in code to try and see what Neil thinks he knows. This turns into a comical game for the sitcom world, only to get less funny when it appears that Neil has recorded the conversation on his phone. Like many others in this episode, Neil is jealous of those who are taking something from him. For him, it comes from the pain of losing his best friend Kevin, and he thinks the proof of betrayal he has will bring them closer again. Allison knows how Kevin acts once he feels betrayed, and tries with all her might to get Neil’s phone, only to end up in a physical altercation where he starts choking her out.

It’s a violent moment in the sitcom—from a man we’ve previously seen as peaceful and naïve— and just like that we switch to our dimly lit drama as Patty swoops in and hits Neil over the head with a bottle.

“You’re not going to tell Kevin anything!” Patty declares.

Neil starts to bleed onto the floor, the severity of his wound unknown. Allison, in a callback to Episode 1, has cut her hand on the glass. The only difference is this time she’s not sent away to deal with the pain and consequences alone. She takes Patty’s hand and the two share a glance that confirms they’re in it together, whatever might be coming next.

And there are a lot of things that could be coming: Neil could bleed out, Kevin could become more powerful in the community, Nick could still be alive, Patty’s alibi with Tammy could crumble, and an ego-wounded Sam could even destroy Allison’s reputation.

Allison has come a long way since we first met her dreaming of a bigger life. In some ways, she manifested the broken glass and the blood that was present in the pilot, but it happened with a different man and a different circumstance. She was alone in this fantasy without any sort of community. What’s changed, though, is that Allison is not alone anymore (and maybe never was). She had someone who admired her all along, but they both were just too prideful to come together over what they had in common.

It’s a hopeful ending amidst all the chaos, and boy I can’t wish harder for a second season renewal. Bring on Season 2, AMC! We’re already waiting, stolen hoodies and all.