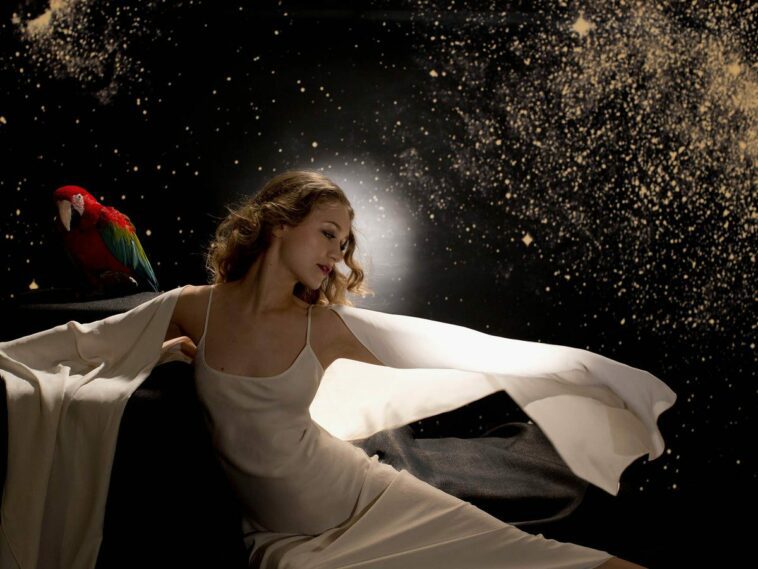 Joanna Newsom can be divisive. The American harpist and singer-songwriter has been releasing albums since 2002 that have fascinated, frustrated and drawn praise or ire from music aficionados everywhere. From her debut album The Milk-Eyed Mender to her most recent work Divers, simply listening to Newsom’s songs in the background just scratches the surface on discovering the many layers of her music. Many of the songs themselves are long, ranging from two to a whopping sixteen minutes, containing seemingly endless poems that super-fans have dissected online to find double and even triple entendres. But Newsom does have her critics, as her songs aren’t for everyone. Some tracks can drag, her whimsical, renfair-ish way of speaking can annoy rather than enchant, and her discography can seem daunting, especially her best work, the two-hour long album Have One On Me. But the appeal of Newsom’s music comes from the calm, the mystery, and the lore so many of her songs reveal to the listener over time. She’s a deeply rewarding artist to get into, so here are ten perfect tracks, in no particular order, to get lost in the world of Joanna Newsom.

“Good Intentions Paving Co.” may be one of Newsom’s most accessible songs for new listeners. It’s a fun little folky track, and one could assume it’s a cute love song and miss the underlying darkness. In it, Newsom is being driven to a gig by her lover, and she thinks about how far they’ve come in their relationship, her deep love for him, but also the nagging feeling that things may not last. Newsom worries about ruining her lover and what it will do to their friend group if they ever split, but remains hopeful their love will carry on. The song ends on a romantic note, as she sings “I only want for you to pull over, and hold me, till I can’t remember my own name,” but a storm still sits on the horizon.

Throughout many of Newsom’s songs, she hints at a heartbreaking tragedy she suffered. “Baby Birch” brings that tragedy into a clear focus, as Newsom sings about the loss of an unborn child. It’s a deeply personal song that’s beautiful in its delivery, and is a favourite for many of her fans.

Horror fans may know this song from the 2008 slasher film The Strangers. It’s a whimsical, yet unsettling song that plays while Liv Tyler is stalked around her cabin by a masked killer, so it’s not exactly a relaxing listen for most. Horror background aside, the song is quite vague in its general message. In fact, you’ll find endless threads on the internet arguing about its meaning, which goes from marriage, mental institutions, abortion, and more. “Are y’interested?” Newsom asks at the end, leaving the theme up to the listener.

“Easy” is a deceptive song. As the opener for Have One On Me, it’s “easy” to assume Newsom is describing herself in a relationship as someone who’s simple to please and look after. Isn’t that what we want from a relationship? Someone in our lives who takes care of us, but requires no effort? Over piano and violin, Newsom continues her self-praises, only to turn dark. She interrogates her lover as to why he makes no effort, while she gives everything. She compares herself to the infamous Bloody Mary, appearing behind her lover should he speak her name. Not so easy anymore, is it?

Despite its long runtime spanning different scenarios and subjects, Have One On Me, at the end of the day, is Newsom’s breakup album. In the song, Newsom and her partner have tried everything to solve their internal problems, but it simply just isn’t enough. Newsom sings slowly and forlornly here, as she picks up her clothes and other belongings from her lover’s place, and gets ready to go. As the song and album reaches its end, we get Newsom’s classic “la-la-la” over the piano, only for it to get sucked into a black hole of strings and drums, and then left with silence. It’s all over.

“Peach, Plum, Pear” is a bit of a make-or-break song for new Joanna Newsom listeners. Her breaking voice and rapid harpsichord in the song can sound like heaven to some, and pure hell for others. It’s not for everyone, but that’s what makes Newsom’s music so fascinating in its polarization. It plays a bit like a medieval nursery rhyme, invoking childlike wonder and repetition as the melody never changes.

“Emily” is a deeply personal song to Newsom, a twelve-minute ballad on harp that details her complicated relationship with her sister, an astrophysicist and who the song is named after. The song begins quite simply, chronicling the sisters’ upbringing on a beautiful farmland, and how they’d bond over skipping rocks at night and watching the stars. It’s quite sweet, before taking a sharp turn towards tragedy. Something traumatic happens to Newsom, leaving her bedridden and her sister becoming her caretaker. The familiar town and farmland that brought her so much joy turns dark, as the townspeople gossip and the animals turn wild. But what matters most to Newsom is that the sisters are there for each other through it all.

Here, Newsom really digs into her storyteller side, telling the tragic tale of two animals, Monkey and Bear. The story follows the two beasts as they escape a farm and yearn for freedom. Monkey, the manipulative partner, convinces Bear to wear fancy clothes and dance for humans as a circus attraction, exploiting his partner for money. Bear grows exhausted and humiliated by the dancing, but monkey insists she keep dancing just a little longer to make ends meet. Finally, Bear gives up, shedding her coat in what some interpret as suicide, and others as her escaping Monkey’s toxic grasp. It’s a tragic, yet beautiful tale that shines in Newsom’s catalogue.

A cosmia refers to a group of moths, which in turn represent a multitude of symbols for death, rebirth, transformation, and more. Newsom’s second album, Ys, looks at the nature of mortality and the relationships between individuals, and “Cosmia” finishes the album with a look back on the death of a friend. Backed up by harp strings, Newsom imagines being drowned by a swarm of moths as she grieves her friend. “Now in the quiet hour when I am sleeping,” Newsom sings. “I cannot keep the night from coming in.” It’s a devastating confession on how long grief persists.

Newsom’s music is heavily influenced by history and folktales, and she uses it to especially dramatic effect here. Citing the poem “Ozymandias”, the song is a twinkling yet epic look at the 21st century and how the places we live rest on top of previous histories and civilizations. None of us really take pause to think about who stood on the ground before us, but Newsom does it with chilling statements that make you think about our history. “Look and despair.”

Did I miss any? Joanna Newsom’s discography is vast, so let me know of any other songs that should be on this list.